Of the vast multitude of game types that just work really well on iOS, first person sniper games are definitely high on that list. Coming from AAA franchise names and high budgets along with one person indie developed stick man games, in freemium, premium, and everything in between. This is the story of one of those tiny developers. In fact, you may have played his last game at some point, Tactical Assassin (Free). Well the ante has been upped, and what he’s put out next is, in my estimation, one of the first must have mobile game of the new year. I give you Lonewolf (Free).

Not to be confused with the pick your path adventure/RPG hybrid, Joe Dever’s Lone Wolf ($11.99), though that game freaking rocks, this is one of the latest games to be published by FDG Entertainment. It was developed primarily by one man, though he had help with the music and cut-scenes and testing and such. His name is Simon Hason, of SHD Games (SHD standing for Simon Hason Design). Lonewolf is a gritty neo noire crime drama with a super simple yet functional and endearing art style, all masquerading as an awesome sniper game with a lot of heart. It’s not perfect. I actually had quite a few problems with the game, but they don’t amount to much in the grand scheme. This is still a must have title. 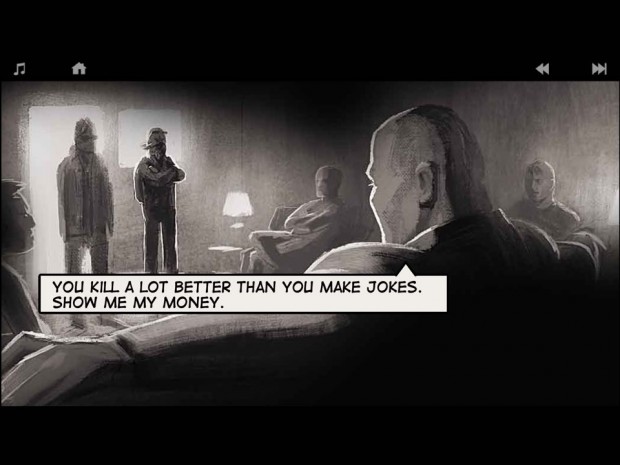 The game starts off incredibly strong, with an excellent tone setting quote and comic book style cut scene. In the first two chapters the story is simple. Chapter one entails you, as the sniper with the handle of Lonewolf, doing jobs for a criminal group called The Assembly. Referred by an old war buddy, you’ll do job after job for Midman as Lonewolf repeatedly asks to meet the big boss, Mando. The opening actually sets up Lonewolf as a very strong, no nonsense, business man of blood, which is slightly undercut by his constant acceptance of Midman’s repeated “No, really, you’ll meet him after the next job, I totally swear.” Over the following three chapters, up to the game’s cliffhanger twist ending, a striking story of rage and revenge is spun.

There are definitely some niggling issues with the story, but that was just the part of my brain that tries to not let me have fun. The rest of my brain promptly curb stomped that part, and I was able to enjoy the story and characters for what they were. Mando definitely takes a page out of Wilson Fisk’s book, a.k.a. the Kingpin of the Marvel Universe, as he’s ridiculously large, strong, bald, and seems just as prone to creatively crushing skulls at the drop of a hat. The point is, this is probably the coolest story you’ll see in one of these simple sniper games. And the gameplay is right up there with it. 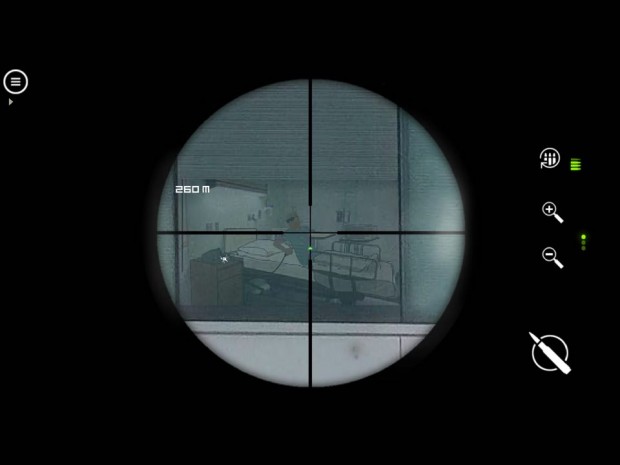 What begins as simple “shoot the guy that looks like this photo” missions to get you used to the controls and mechanics soon turns into an outright puzzle game at times, as you’re asked to gun down every guard or target without raising any alarms whatsoever. Kill the guy in the car so his body hits the horn. Kill the one who comes outside to investigate before he can raise the alarm. Kill the other one when he patrols far away enough from the one remaining. So on and so forth. One mission has you kill a hospitalized man, who has his heart monitor as well as a panic button. Sometimes you need to use non-lethal hits, and in one notable mission you need to shoot the actual gun out of someone’s hand. Many of these missions and puzzles are giving people trouble if our forums are to be believed. Without giving anything away, let me just say that patience is a virtue. Try waiting a long time to see the targets cycle through all of their animations/patrols. It definitely helps.

I haven’t even gotten to the non-sniper missions! Sometimes you’ll bust out a handgun or an M4 and just mow down buildings full of people. There are some unique missions that only happen one time. That’s crazy to me. You’ll almost never see any AAA developer do that. If they take the time to design a mechanic or system, you can bet your bottom bullet that they’ll use it at least a few times. But that wasn’t the way Simon wanted this game to go. It’s bold, and the game is better for it. 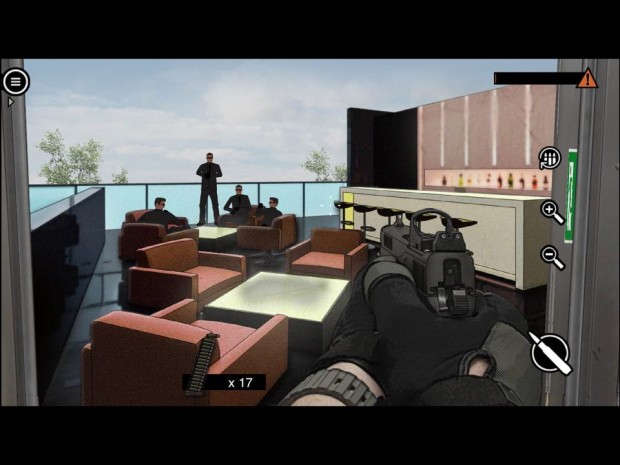 After each mission you’ll be rewarded for objectives completed, headshots, and accuracy. You can replay a mission until you get the badge for all headshots or 100% accuracy, and you can earn each on separate runs if you have to, but you can’t earn the money again until new game+. That money is used to buy new sniper rifles, new scopes, and various helpful items that affect things like recoil and stability. When the game decides to up the difficulty on you, it will add wind and distance effects. If you look at the sniper scope like an X and Y axis, it becomes pretty simple. Distance effects the X axis, requiring you to aim higher to account for gravity, while wind effects the Y axis. There are items for each mechanic that mark the new X and Y coordinates on your scope, basically, and you just have to line them up like you were doing some high school geometry. It is possible to play without the wind and distance meters, but you should definitely buy them. Every item, once bought, can be used with every other gun.

The gun physics and sound effects are extremely satisfying, and I saw on the developer Facebook that this was definitely a focus of the design. It shows. Even the breathing is just right, as your sight will be a little wobbly until you hear Lonewolf exhale. Then it’s smooth as butter. Bloody, skull fragmented butter. If you want to practice your mastery with any gun, including the handguns and machine guns, you’ll unlock various shooting ranges as you progress through the story. As an added bonus, there is a page of mini games, including speed variants for each gun, defense variants for each gun, a kick up game where you keep a ball airborne by shooting it repeatedly, a random game called ‘killhouse sniper’ that I didn’t understand, a zombie defense variant, and finally, a duck hunt game using the pistol. Each game lets you set a certain goal that you’ll wager money on. If you don’t reach that goal/score, you lose your money. 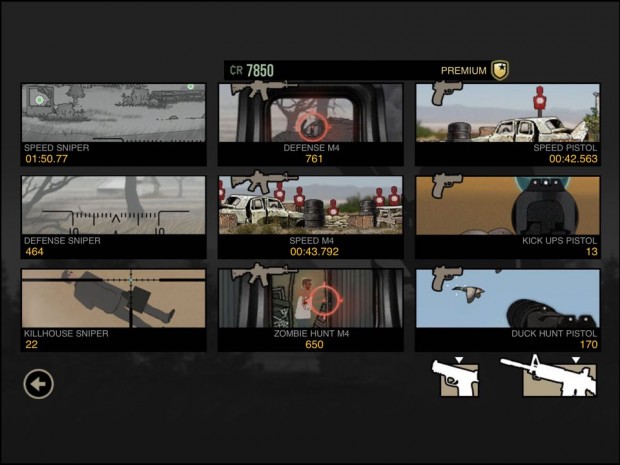 In the end, this game stands shoulder to shoulder with the likes of Hitman: Sniper ($0.99), despite the infinitely smaller budget and lower level of polish. But I have to get into the flaws. Chiefly, the way the freemium to premium transition is handled. The price to go premium is more than fair at only two dollars. Absolutely worthwhile. My issue is how obnoxious the game is in freemium mode. It is really up there. You have a freemium timer/health bullet meter that limits how many missions you can do, and you lose one of your ‘bullets’ every time you fail a mission, which can take only a few seconds as you’re trying to puzzle things out. On top of that, after every few losses, and sometimes after a win or apropos to nothing, you’ll be hit with thirty second advertisements. Once in a great while, these will be skippable.

It’s definitely worth upgrading to premium right away, except even that has some draw backs. The sense of progression is just destroyed, as the premium upgrade gives you enough money to buy the most expensive gun and scope in the game. And that gun isn’t even necessarily the best for each mission, because sometimes rate of fire is more important (for which the forum favorite is the 7.62 OBR). The final missions will be extremely hard without these guns though. But when there are a dozen other guns in between, it feels a little cheap and a little unsatisfying to skip ahead. I also had some problems with the user interface. It’s not as intuitive as it should be to access certain pages and information. Also, once you’ve bought every scope/item/rifle, you won’t be able to look at those items detail pages anymore. You’ll only be able to select them. If you’ve only bought some of the items, you’ll have to look at unpurchased items to scroll over to purchased ones and see details.

The final issue? Many people are having issues with crashing and getting all their progress reset. That’s a pretty nasty bug. I have to dock points from the game for these flaws and inform my readers here, but that doesn’t make the game less worthwhile to download in my opinion. It’s a unique game with heart, and some really challenging Game Center achievements that I kind of want to go for. The main one? Play through the entire game with 100% accuracy (not headshots thank god) and with no failed missions. This campaign is definitely meant to be replayed a few times. There are new chapters coming in future updates to continue the story as well. If this game sounds vaguely like your jam, it most probably definitely is. Super solid work, and I’m glad I played it.