While deep, engrossing mobile experiences have been somewhat downplayed by the general public, everyone knows that as far as quick fixes go, the platform is king. Dashy Crashy (Free) is yet another take on the success of Crossy Road, all the way down to its monetization scheme, but it’s a perfect example of a stop and go game that’s easy to pick up and hard to put down.

The game starts off in the simplest of ways — on a crowded road. You’ll likely crash in the first few seconds getting into the swing of things, but figuring out your car’s capabilities are a cinch. You can basically swerve back and forth between lanes, accelerate, and brake. It sounds shallow at first, but once you really dig into it, the nuances start to creep up on you. For instance, acceleration flicks are very touchy, to the point where you can continuously rev the engine by swiping upwards constantly. 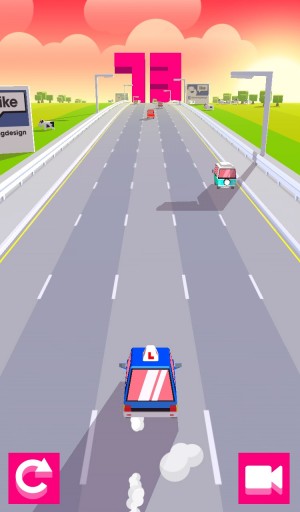 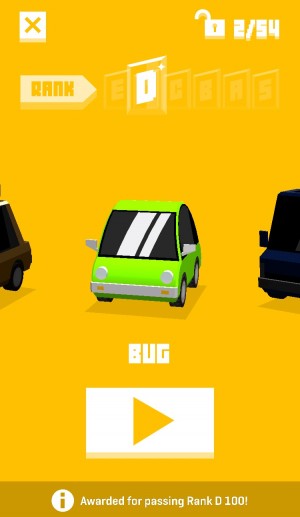 Crashy operates on a loop of sorts as an endless experience, but there’s plenty of different locales, patterns, and even a day and night cycle to help break things up. There’s nothing truly crazy here like highways on another planet or anything, but it gets the job done. What I really like though is how active Crashy is when it comes to player interaction. It’s almost OCD-like in nature, but the game is constantly communicating with you and giving you something else to deal with.

Whether it’s pesky cars swerving into you, “hazard" lanes that have car chases interrupt your run, or cars zipping by with emojis explaining their mood (and other players asynchronously), it can get busy on-screen. It adds to the charm as things can get rather hectic, constantly keeping players on their toes. The score screen that’s built into the horizon is also a nice aesthetic choice, as it keeps the HUD clean, leaving lots of room for the sharp, bright visuals.

Having said all that, the hectic nature can feel a bit cheap at times. After hitting the 100 distance mark or so cars can come out of nowhere, leading to unlikely crashes if you don’t have lightning fast reflexes. You can control a crash slightly after impact with an aftertouch effect of sorts, reminiscent of the Burnout series, but it’s not much, and likely won’t comfort you after a good run has just been cut short. It may, however, edge you just close enough to a new score level.

Its microtransaction model is also fair, which is another point in Crashy‘s favor. Without paying anything you’re limited by energy, which refills rather quickly after watching a video ad. By paying any amount of money ($0.99 at the lowest) you can bypass the system entirely, essentially “buying out" the game. You won’t get every car (those range from $0.99, to $1.99, to $2.99), but you’ll have the opportunity to play whenever you want and unlock more content over time. I do prefer Crossy Road’s more forgiving model of letting you play an unlimited amount of times, but this is very close.

If you’re looking to shut your brain off for a while, check out Dashy Crashy. It sports a delightful, easy to digest cartoon art style, and gameplay that keeps you coming back for more.