If the Teenage Mutant Ninja Turtles have one lesson to teach us, it’s that pizza is awesome. If they have a second lesson to teach us, it’s about the value of teamwork and watching out for your friends and family. The thing is, outside of the multiplayer TMNT games, we’re usually only seeing one of the brothers in action at a time. Sure, you can usually choose your favorite turtle, but what would Master Splinter say if he saw the team separated all the time like that? TMNT – Portal Power ($3.99)’s main claim to fame, as near as I can see it, is that it allows you, nay, requires you to control all four of the turtles at once. If that sounds like it could get hectic, you’re right. Portal Power isn’t quite as deep as some other TMNT games, but it’s still a pretty fun game that fans of the characters should enjoy.

Portal Power is based once again on the Nickelodeon CG animated series, and features all of the main voice actors from the show reprising their characters. You have to play through five worlds each set in a different location and composed of several stages. While each of the worlds has one or two side-stages that can only be reached by special means, for the most part it’s a linear run from start to finish. You’ll be brawling through several sets of enemies on each stage, and every few levels you’ll finish things off by dealing with a boss. Pretty standard fare for a TMNT beat-em-up, but the actual gameplay is different from previous action games in the series. 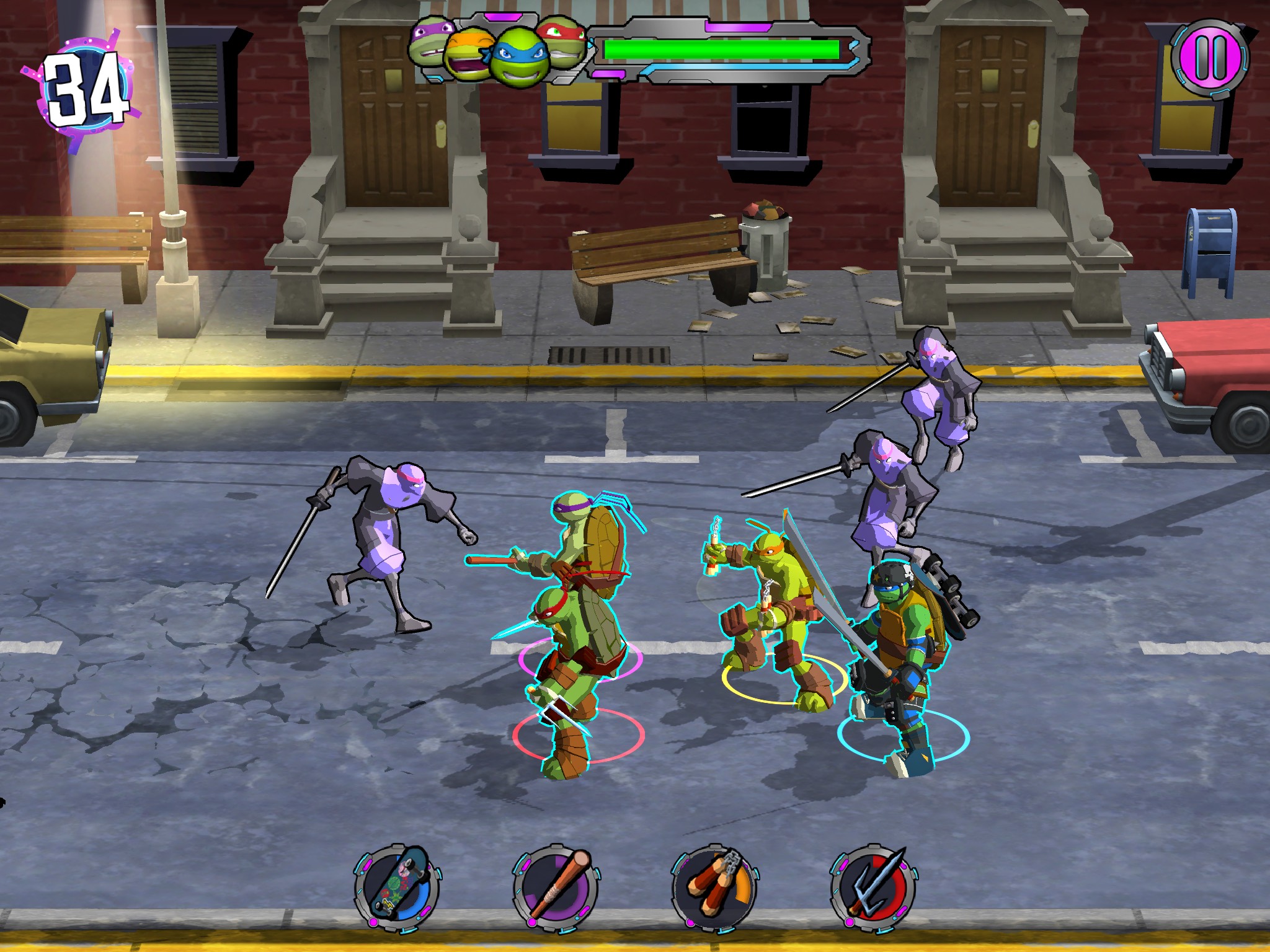 Since you’re controlling the whole team, you obviously aren’t in direct control of every move they make. Instead, you swipe across a turtle and he’ll start following your finger around. If you swipe over all of them, they’ll all follow where you’re dragging. Drop your finger on an enemy and they’ll gang up on it. As the game progresses, you’ll have to start breaking your group up to handle multiple threats at once, requiring precision swiping and a careful eye for where your turtles are in the chaos. It’s a little bit like a fast-paced take on Battleheart ($2.99), albeit without the RPG elements. As you beat down enemies, each of the turtles will charge up their own special move that you can use by tapping a button at the bottom of the screen. Every 50 hits in a combo that you can manage allows you to unleash a power team attack that will basically clear the screen. If you get hit, you lose the combo and any team attack you were holding on to, so it’s better to use it while you’ve got it.

An additional wrinkle comes in the form of special costumes that you can find littered throughout the stages. Equipping a turtle with a costume will grant them with a unique perk and swap out their special move for a different one. Each turtle keeps their own costumes so if, for example, you want to equip the knight costume on everyone, you’ll need to find four of them. The costumes are also needed to open up side-stages. You’ll usually have to come back to these at a later time, since you rarely have the needed costume when you stumble upon the branching point. There’s quite a large variety of costumes included in the game that are unlockable, but there are a few costumes that can only be unlocked by purchasing them via IAP. As you might expect, those costumes offer some very powerful perks and include some nods that fans will appreciate, like the Trenchcoat costume that allows you to summon the classic Party Wagon. You don’t need these IAP costumes to beat the game or unlock any stages, though. 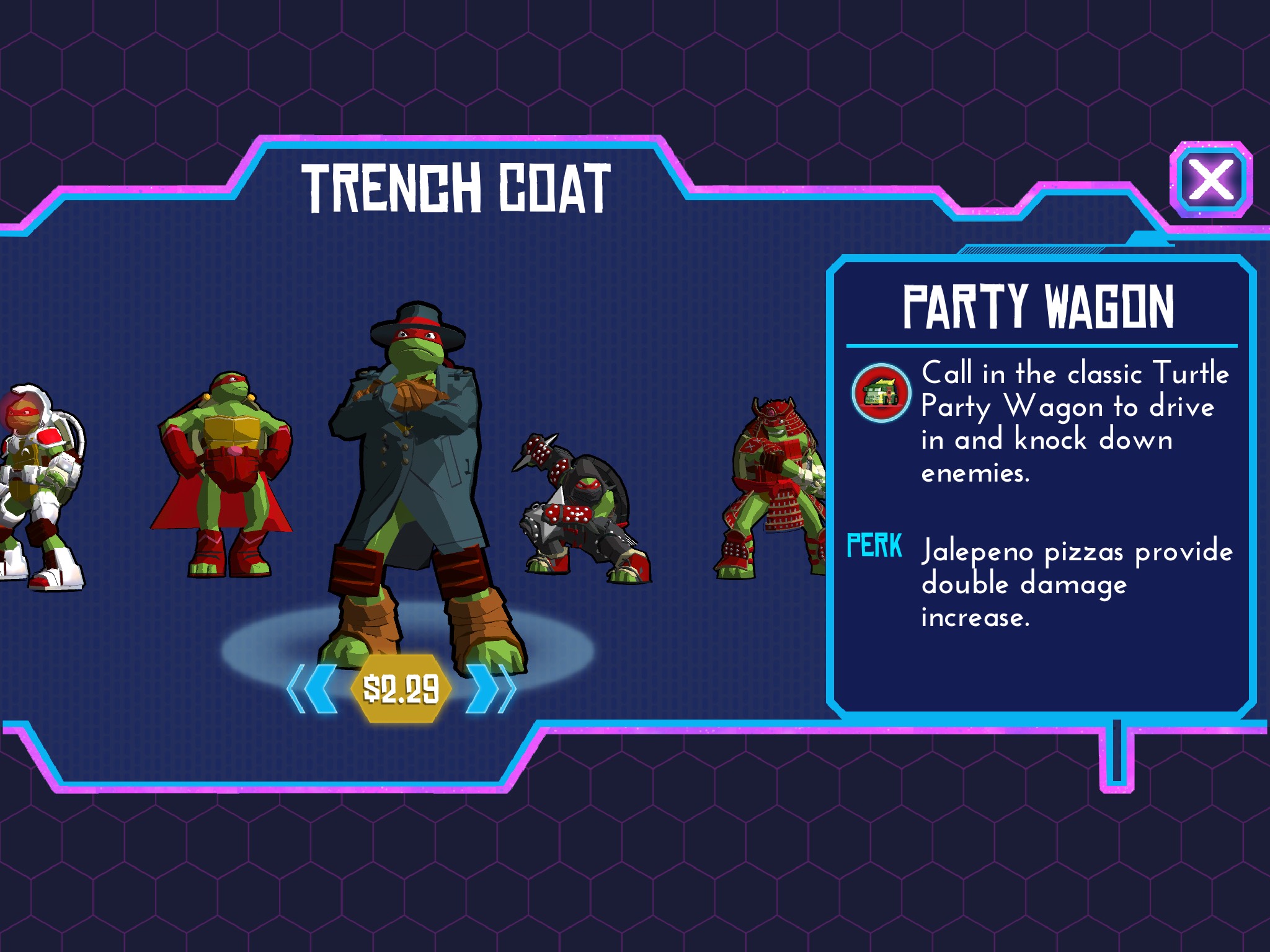 Clearing the game on regular difficulty is pretty easy and isn’t much more than an evening’s work if you want to clear it out in one sitting. There are a couple of additional challenges thanks to the presence of Kraang Crystals and the Nightmare difficulty setting, at least. Each stage has up to three Kraang Crystals you can earn by completing the stage without losing too much of your life bar. While it’s pretty simple to pull off early on in the normal difficulty, there’s a slight risk of missing out on that third crystal if you’re playing sloppily later on in the game. Nightmare difficulty, on the other hand, can be tricky simply to beat, let alone trying to earn all of the Crystals. It can be a bit frustrating since you can’t always see where your team members are at in the heat of battle, but it’s also fairly exciting to try and stay on top of the chaos.

In terms of presentation, the game looks and sounds the part, and has an easy-to-understand UI. It would be nice if there were a little bit more visual variety within each portal world, but most of the worlds are at least quite distinct from one another, so while you might get sick of seeing the same sets in New York, you’ll soon be moving on to something completely different. The turtles are chatty enough to justify having the proper voice actors without over-doing things, and though I will never get used to Donatello being voiced by the guy who used to voice Raph, I’m glad everyone decided to lend their talents to Portal Power. While there aren’t any Game Center achievements, that’s getting to be a liability for games the longer that Apple ignores the problems users are having, so I’m content with the in-game achievement system. 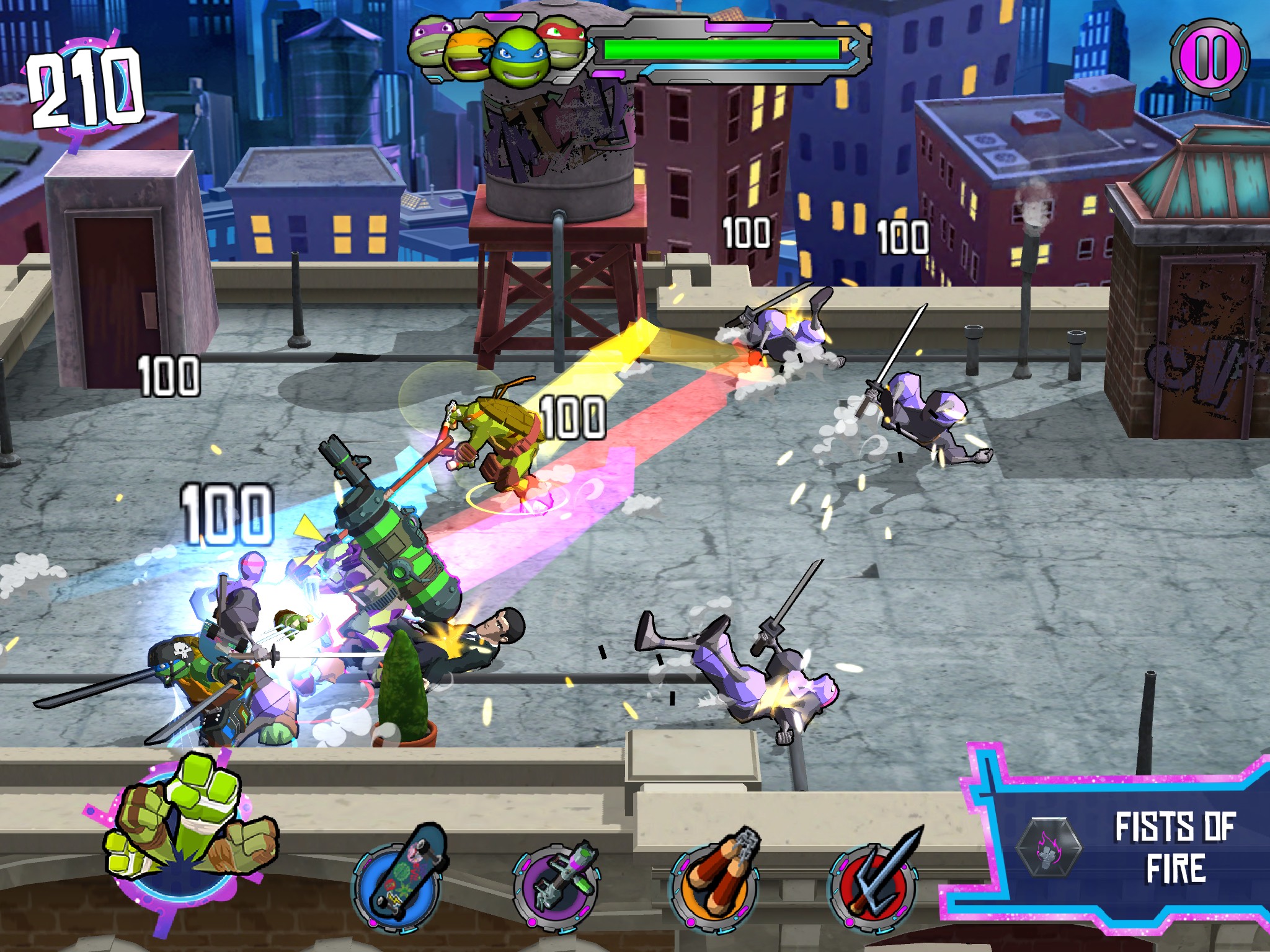 While it’s tempting to wish that Portal Power had some kind of RPG-style progression system based on its similarities to Battleheart, I think it’s fine that the game is just a straightforward, fast-paced action game. You’ll see everything it has to show you pretty quickly, but if you don’t mind the idea of replaying on a higher difficulty, you’ll get a good enough value out of the game. I don’t think there’s enough here to keep the interest of those who aren’t fans of TMNT, but if spending a day or two bashing scores of Foot soldiers with the brothers sounds like a good time to you, Portal Power won’t let you down.