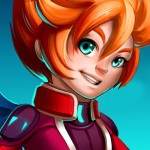 Hi-Rez Studios seems to be diversifying their portfolio. In addition to bringing back Tribes in 2011, they worked on SMITE, the action-oriented MOBA, and now, a rather un-imposing mobile game. I have to say though, if Jetpack Fighter (Free) is indicative of their future imprint on the platform, bring it on.

The concept is easy to pick up, which gels well with its free pricepoint. You play the role of the titular Jetpack Fighter, cruising through a futuristic city to destroy evil. Movement and attacks are one and the same, allowing you to traverse the air with ease. And basically, that’s it. Level layouts are very similar to a platforming game, but you can hover and fly at will to traverse them, so they’re not particularly tricky. Enemies are scattered about to keep things interesting though, and evolve as you make your way across the game’s story mode map. 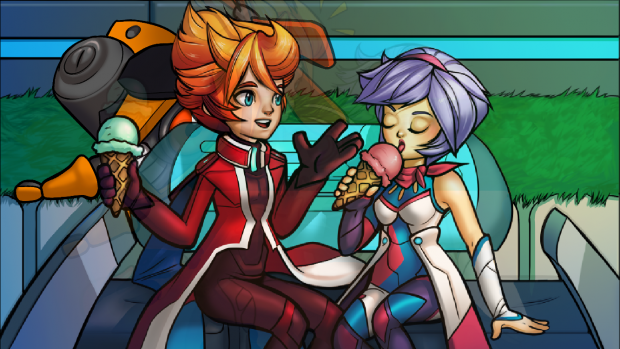 Jetpack Fighter uses a control scheme that feels native to touch devices, and only takes a few seconds to learn. There’s no clunky d-pad — all you do is swipe at the proper area, and said fighter will swoop in that direction — there’s no annoying slingshot effect, you just move in the direction you want. Since attacking and movement are all in one smooth motion, it’s easy to go anywhere you want on any given map. You can also hold, aim, and release to trigger a super dash, which has unique effects for each character. It adds a strategic element as standing still can put you in harm’s way, but definitely pays off if you can slam into multiple foes. That’s key, too, because hitting enemies in rapid succession will ensure that your combo chain is intact.

The visual style is bright and cartoony, giving off a modern Mega Man (or more recently, a Mighty No. 9 or ‘Splosion Man) vibe,  complete with enemies that mostly consist of robots. Humanoid boss characters also put up a fight, and are the best parts of the game as you’re flying through the air trying to battle your equal. Levels are usually set to the tune of roughly a minute or less, which makes it very easy to pick up and play — and likely geared towards its energy system. It’s a mixed bag, but for the most part, Hi-Rez is fair with it. Equipment feels tertiary to the experience, and even outright pointless sometimes, and I only had to occasionally go back and replace items after long sessions. 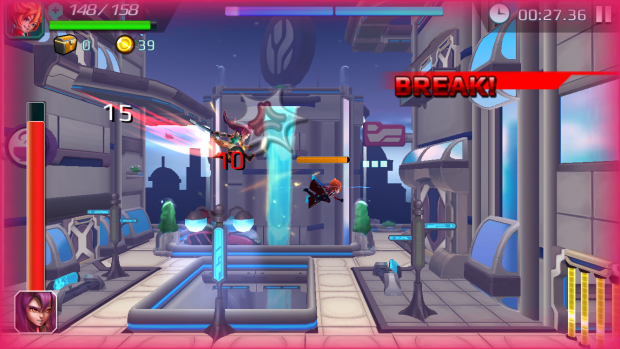 Fighter has a ton of IAP, which can be ignored for the most part, but does pop up every so often. For starters, energy is a go, even if you happen to make an IAP payment. It seems fairly generous in that it regenerates every 10 minutes or so, but that’s only for one heart, and eight are required for most levels. If at all possible, I’d rather see the system eliminated entirely. Elsewhere, gold and gems can be purchased in the typical increments. Gems are the premium currency that essentially funnel into everything else, granting more plays or gold, which allow you to unlock more fighters. The energy gimmick is more acceptable when you account for free gems earned through gameplay, which I immediately funneled back into hearts.

If you’re into platformers, I’d give Jetpack Fighter a try. Don’t let the free bit scare you off though, as you can get pretty far in without having to wait or spend a dime.