Pocket Mortys (Free) got announced last week and I think I literally jumped out of my chair in anticipation of reviewing this game. Now that it’s out, it’s time to go get it already. Adult Swim Games’ most recent offering is really amazing and free to boot so you can try it out right now to see a great Pokemon like game right here on iOS.

In case you have been living under someone living under a rock, the point of a Pokemon like game (in this case Pocket Mortys) is to gather a team of creatures and battle them against other creature trainers to see who is the best of the best. In this specific game, the co-star of the show also serves as the template from which dozens of variants are born. There are fish Mortys and there are biker Mortys and ghost Mortys and eyeless Mortys and… well you get the picture. There are a lot of Mortys, and your job as the best Rick around is to capture them with mind control chips and force them to fight for you. 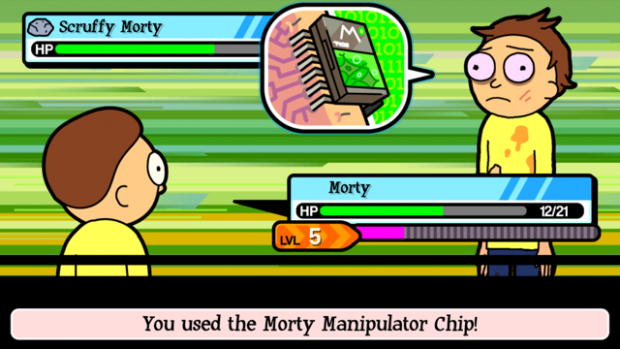 If you aren’t familiar with the show Rick and Morty, there is still a lot to enjoy about a Pokemon clone that has it’s own gameplay system and item crafting discovery. While your primary goal is to strengthen your squad of young Mortys, collecting additional Mortys and gathering crafting materials feeds into the crafting and evolution mini-game like interfaces. Now I won’t spoil too much of the fun of the crafting, but if you are already planning on playing this game, I have one thing you really must take away from this article. The mind control chips are craftable and it requires a supercharged battery(battery + turbulent juice tube), tin can, and a computer chip. This may seem like a minor thing to know, but it will allow you to capture a lot more Mortys without having to spend on extra IAP.

Even though there are only 3 ‘elements’ in Pocket Mortys, there is just enough complexity to keep combat interesting. Whenever a trainer prepares to bring out a new Morty, you’ll be given their name and picture but not their element and having them memorized gives you a big advantage in not having to orchestrate additional swaps. One of the most satisfying feelings in pokemon is carving out a huge chunk of health from or outright taking down a higher level pokemon simply because you anticipated an elemental weakness properly. That feeling is very much carried over in Pocket Mortys. Walking out of a fight at 90%+ health on all your Mortys is a mighty fine feeling. 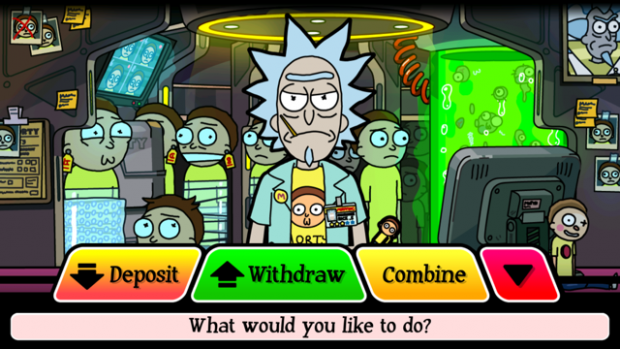 Morty evolution is a pretty lightweight system and from what I have seen so far, it is only contingent on two factors. One, having two of the same Morty and two, are they already fully evolved. If you have two Mortys that are not yet fully evolved, you can combine them and create a higher level version with better stat growth. I have not yet come across any Mortys that change element after evolving, but there are just a few blank spots in my Morty Deck, so I won’t fully rule out the possibility. Getting fully evolved Mortys quickly is the best reason to buy the IAP gacha packs and will definitely allow you to skirt a bit of the grind by having the ability to take down much higher level enemies.

Pocket Mortys is not a perfect game, but my list of complaints is really pretty short. It sits at less than 700 mb on my iPhone 6+, but it is one of the fastest battery draining games I currently am playing including a few 3D games. The game, which thankfully does not require an internet connection to play, would make for an even better escapist experience away from civilization if it were more in line with other 2D games that weren’t graphically intensive. As it is, you might want to bring a way to recharge your battery if you want to play Pocket Mortys while you are out and about. The other, slightly more involved, issue is that the game becomes a slog around the middle and continues to be quite a grind right up to the end. The gameplay differences between clearing levels and beating bosses in the game is minimal and almost purely cosmetic for a large portion of the game. 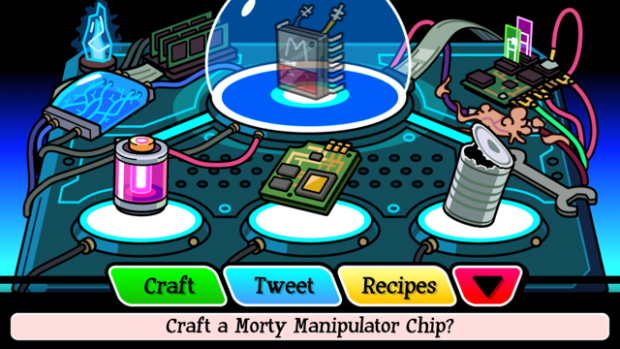 I would like to think that with an amazing IP and a solid monster capture platform, Adult Swim Games should have plenty of opportunity to not only spruce up it’s currently content, but to expand outwards with new story elements. As it is, I feel a little like if there were a Groundhog Day version of Pokemon, seeing the same town, same people and same events day in and day out over and over, it would have quite a bit in common with Pocket Mortys. Luckily there is still charm and mystery to be squeezed out of this one even if you start getting used to the build up to each Council Member fight. Overall this is a surprisingly well constructed game and nitpicks aside, you owe it to yourself to dig into the game and ask why aren’t there more big name Poke-clones out there.