Car combat is one of my favorite subgenres, despite the fact that it flies under the radar in just about every generation. My first taste was probably Rock ‘n’ Roll Racing on the SNES, before I graduated to the PlayStation platform, with Twisted Metal and Vigilante 8, among others. There’s something exhilarating about racing in a fast-paced environment while explosions are happening all over the screen, especially in some of the more flair-heavy games. While CaRRage (Free) isn’t as iconic as the aforementioned titles, it’s an incredibly fun way to pass the time on your mobile device. 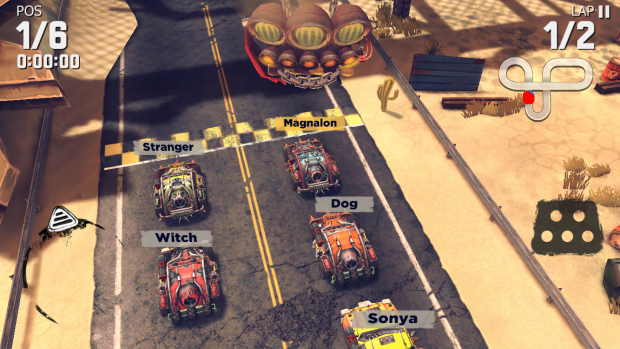 Featuring an isometric view like some of the more classic racers, CaRRage is basically a slot-car affair. Progression is gated behind stars, which are earned for completing races. It’s a typical format that you’ve seen many times before (all the way from the retro era to modern releases), and although it’s jarring at times, it works. There is a small arena function in CaRRage, but the core concept is mostly built on a foundation of racing, with short lap requirements (usually two to start off) and constant action. Players will have the essentials at their disposal to use during matches — including rockets, mines, and a boost. It sound simplistic, but all three of your basic kit options allow for just about every strategic move in the book (gaining a lead and keeping a lead respectively).

Despite the fast and loose arcade nature of the game, the control scheme is tough to get used to at first. Acceleration can be set to automatically propel you forward, and you’ll need to move your car by way of a virtual joystick in the lower left-hand corner, and reverse using another button. It’s incredibly finicky at first, and my initial run was mostly spent crashing into walls. Once you get the hang of the isometric viewpoint though it’s not so bad, and it’s a lot easier to acclimate than a lot of other similar titles. You can also flip the controls, or opt for a less analog form of movement and switch to a digital d-pad. It’s not exactly the most riveting array of options, but it gets the job done. 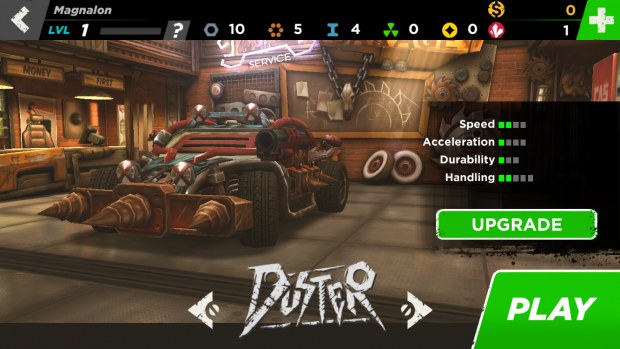 With 11 levels, a full campaign, local multiplayer (but no online), three modes, eight vehicles, nine weapons, and 34 modifications, there’s a lot to do in CaRRage. The game is free, and despite the baggage that comes with that monetization scheme, it’s actually rather fair. You can basically play to your heart’s content (including quick races on completed tracks), but additional coins, power-ups, and upgrades are available if you want to play. Thankfully, unlike a lot of other games with IAP these days, CaRRage works offline and doesn’t require any of these purchases. The only annoying thing is that when you first boot it up (or come back after a hiatus), it has to download a ton of information, which can take anywhere from five to 10 minutes.

If you’re into vehicular action games, you really can’t go wrong with giving CaRRage a try. It suffers from a lack of personality at times, especially in regards to the soundtrack, but for a free game it offers up a whole lot more than a lot of paid experiences.