My New Year’s Resolution was a weird one, while you guys are quitting smoking, going to the gym, and other lofty life-changing goals, I decided I would play Clash of Clans (Free) on a high level. Admittedly, it had a lot to do with seeing a Clash of Clans trailer before Star Wars and thinking to myself, “You know, it’s kind of dumb that I’m not regularly playing a mobile game that’s grown so huge it’s the last thing you see before the new frickin’ Star Wars starts." That being said, the cool part about hopping into the wild world of Clash of Clans now is that over the years they’ve added so many different quality of life improvements to the game. It’s sort of crazy how often I find myself thinking, “It would be nice if I could do ____________," only to delve deeper into the menus and see that already exists. That being said, the game has also grown exponentially in overall depth and complication, making the original version that I first played back when it was released years ago feel… Surprisingly basic in comparison.

The tricky part of all this is that for such a deep and complex game, the Clash of Clans tutorial is remarkably basic and really doesn’t do much to explain why you should do certain things, the strategy of doing other things, why what you think is a good idea might be really stupid, and other stuff. All that’s really covered is how to build buildings, how to train troops, and how to attack. Needless to say, there’s a lot more to this game than that- A surprising amount, in fact. If for some crazy reason you’ve never played the game before, Clash of Clans is all about base building and attacking other bases. It’s neat how they take the basic builder concept, and just crank the overall depth to 11 through clans, wars, countless strategies, and other stuff.

Anyway, here’s a few things I wish I would have known as I was just starting to play:

The main thing that limits your progress in the early game is builders. Builders, as their name indicates, are responsible for building everything in your base. You’ll also need a free builder to do things like remove trees and rocks from your map to make more room for your base and you’ll need an available builder to build/upgrade walls, even though they have no construction time. The game starts with you having a single builder hut, and the tutorial will require you spending 250 gems (the in-game currency) on another. Your third builder costs 500 gems, the fourth costs 1,000 gems, and the final builder will run you 2,000 gems. That’s a total of roughly $35 worth of in-game currency.

How to deal with acquiring your builders is going to be your first major decision of how you’re going to play the game. There’s thousands of gems available for free via unlocking various in-game achievements. As you play, Clash of Clans basically throws gems at you, but they’re in small allotments of 1-5 gems here and there. There’s an achievement called “Sweet Victory" that awards 450 gems once you’ve collected 1250 trophies, but earning that many trophies is going to require winning a ton of raids against other players while successfully defending a ton of raids against your own base. Everything is unlockable just by playing, like most free to play games, but being stuck with only two builders will significantly slow your progress. If you just want to plug along, you’ll slowly get there, but just be aware of how insanely far out the goal posts are, particularly for the fourth and fifth builder. It doesn’t take long before you’re coming across buildings that take entire days to build or upgrade, and you’re going to get to the far more interesting higher level content way quicker the more of those timers you have rolling at once. 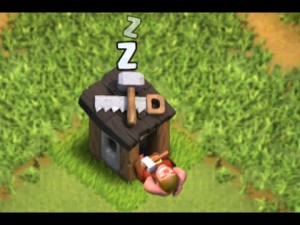 The next thing that isn’t super apparent is how you want to build your base out and what the best strategy is for attacking. Since we’re growing our base and trying to level up as quickly as possible, we want to follow the “farming" strategy, as the Clash players put it. There’s two main focuses when raiding, although they inevitably blend together at times. Players going for trophies are looking to kill your town hall with as few troops consumed as possible, while players looking for resources are going to be going after your gold and elixir stores. I say they go together at times because if someone three star’s your base and kills everything, they’re going to achieve both goals, so, be prepared for that.

The thing that makes Clash of Clans significantly more exciting than your typical builder is the fact that you can take other players’ resources, and in turn, they can take yours. Gold is used for building defensive structures, elixir production and storage structures, and walls which quickly turn into a huge gold sink. On the other side, elixir is used for creating and upgrading troops along with the buildings that support them and gold production/storage structures. Elixir pumps and gold mines passively produce their respective resources, and are collected by the player by tapping on them. When you are raided and these buildings are destroyed, you lose all of the uncollected gold/elixir. On the other hand, if your elixir or gold storage buildings are destroyed, you only lose 20% (or less if you’ve got them upgraded higher) of what was in them. It still stings, but not quite as much. 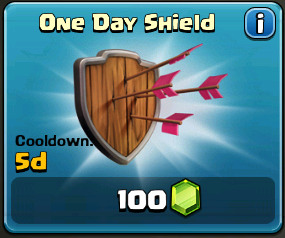 Before we get much deeper, let’s talk about shields. When you start the game, you’re given a three day shield. This means for 72 hours absolutely no one can attack your base. This timer appears on the top of the screen, and gets reduced each time you attack a player. So, for the first three days you’re playing it seems like a really good idea to only attack the goblins in the single player campaign and focus on building your base up as much as you can. Once your shield runs out, you’re open for attack from other players. Once you get attacked, you’ll earn another shield that grows based on how bad your base was demolished, and the cycle repeats itself. You can also spend gems on shields, but, at this stage in the game nothing you have is really valuable enough to make that worthwhile as opposed to just saving up those gems to spend on more builders.

The cool thing is, we can exploit this mechanic along with typical Clash players desire for trophies by building our base in a way that might initially seem really stupid. Standard wisdom would lead you to believe that you want to build your base in the center, with your various buildings and defenses all tied to making sure your town hall is protected. This seems like a solid strategy, but since we’re just building up our base at this point, we don’t really care too much about trophies. Players that do need to go through all of our defenses, likely destroying all of our gold/elixir collectors and stores, and then destroying our town hall.

Backing up a tiny bit, when you go out to attack players, you first scout bases by paying an insignificant amount of gold which slowly scales up as you upgrade your base. The whole idea of doing this is looking for an opponent that you can beat using as few resources as possible. So, let’s put all this together and come up with a low-level base design that’s specifically built around the idea of being a very appealing target for people to specifically kill our town hall with as few units as possible, triggering your shield, and leaving you to farm your resources in peace. As I said before, it seems super stupid, but it’s actually not a terrible idea to just leave your town hall totally out in the open in the corner of the map while reinforcing all your defenses around your resources. 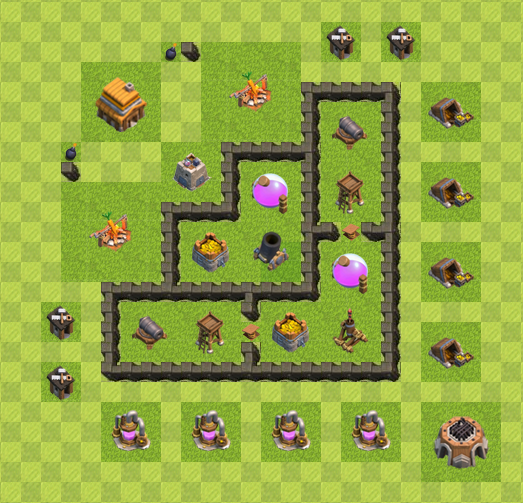 What’ll happen is players that are just going after PvP trophies will fight you and kill your town hall with minimal units. Meanwhile, anyone specifically raiding for resources won’t want to bother with heavily fortified gold mines, and will just move on to greener pastures. As soon as I restructured my base around this idea, the amount of resources I was losing to raids dropped significantly. Sure, people still come in and mow everything down, but the vast majority of the time I just get my town hall popped. The cool part is, since we’re setting ourselves up as such juicy targets, it doesn’t really matter if we go out attacking other players.

So what are we looking for? Well, again, early in the game it’s all about soaking up as many resources as possible. The juiciest targets are full elixir pumps and gold mines that no one has gone in to empty, and, often they’re the least defended structures in a early base. Before Town Hall 5, you really don’t have enough walls to wall them in, so, they’re ripe for the plucking. The things you’re going to want to be looking for when you attack are your potential opponent’s builder huts, as well as the state of the gold and elixir stores. The perfect base to go after is one where there’s Zzz’s coming out of the builder huts and little (if anything) in either their elixir or gold stores. This is a great indication that the person you’re attacking hasn’t logged in in a while, as if they had, their builders would be at work and their excess gold and elixir would be in their respective storage areas. Since this isn’t the case, their gold mines and elixir pumps are going to be chock full of unclaimed resources which we get 100% of by destroying.

Additionally, low level players don’t seem to often figure out how valuable these buildings can be, so they’ll largely be undefended. It’s kind of rare to find a base that fits all these criteria, but it isn’t hard to find one that fits most without much gold and maybe just one builder sleeping. So, go in, deploy your cheapest troops (barbarians and archers) and specifically go after the mines and pumps. Once you’ve got them destroyed, don’t deploy any more guys and just see what the remainder can get done. Chances are they’ll die to cannons or something like that, and you can just end the battle.

Convention wisdom would look at that and say, “Well, what’s the point? We didn’t get a single star or any trophies or anything." Through the lens of wanting to build our base up as quickly as possible, those things are irrelevant. If you can steal a few thousand gold and elixir for comparatively little elixir and gold investment, who cares about trophies? It’s not like you’re going to be able to compete in any serious manner this early in the game. This all changes as soon as things get real as you advance up a few Town Hall levels, but, the early game can be sped up significantly by being smarter with resources when it comes to both raiding and defending.

Anyway, Clash of Clans is a shockingly complex game, but these few things would have been ridiculously useful to know before I got started.