It’s weird how much gaming has changed since I was a kid. In the old days, sequels usually meant a game would be bigger and better in nearly every way, with more levels, characters, new modes, etc. Consider Perfect Dark, the spiritual sequel to Goldeneye 007, for example. It was absolutely bursting with new stuff to do. There was the campaign and multiplayer (like Goldeneye), but it also had a brand new challenge mode, a gun range, a co-op and counter-op campaign mode, a main menu that you could walk around in, and a massive customizable bot mode that I lost a large chunk of my adolescence to. These days, though, things are a bit different. Because games tend to have more content added through updates and DLC, that means version 1.0 of a sequel can often feel a bit lacking. It’s especially striking when you consider iOS classic Badland ($0.99), which is certainly one of the most updated games I can think of. It’s the reverse of my Perfect Dark example, where the original game is the one now bursting with levels and modes while the sequel feels a bit sparse in comparison. It’s an interesting problem to have, but even despite that, I think Badland 2 ($0.99) is a superior game to the original, with the potential to surpass it many times over in terms of quality and amount of content. 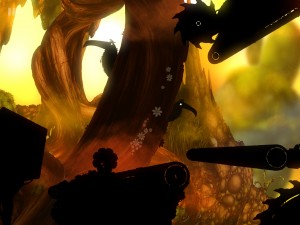 Of course, we can’t review a game based on what it could potentially be. Nearly every game on the App Store seems to have more levels and whatnot “COMING SOON!”, and half the time the promise is left unfulfilled. Still, I think Frogmind has earned our trust in the case of Badland 2, since the first game saw an absurd amount of levels and modes added after it was released. Remember, it didn’t launch with the awesome level editor or co-op multiplayer (among many other things), and it had far, far fewer levels. In fact, it’s at Update #26 as of this writing. That’s nuts!

Badland 2, on the other hand, is still sitting at V1.0 (being just released and all) and has no level editor or local multiplayer of any kind, and only 30 levels. It does have an online mode where you can compete against the rest of the world in special levels, but (for me at least) it seems to be a bit broken, just hanging at the loading screen until I get bored and go back to the story mode. (Might be that Game Center bug again?) Beyond that, it’s just the campaign with its few dozen-or-so levels and that’s it. 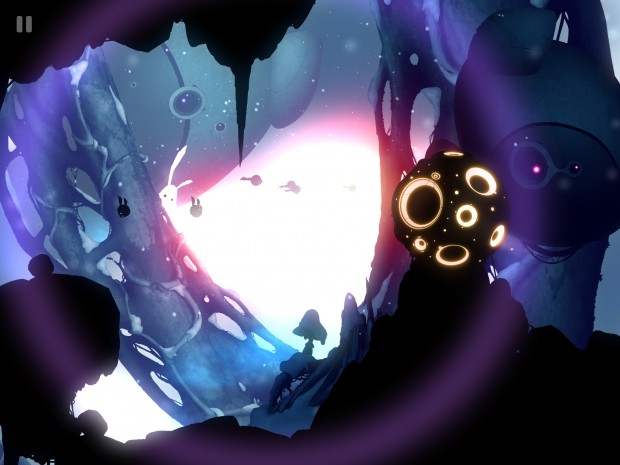 And still, despite all of that, I think it’s a better game than the original. How can that possibly be? Well, for starters, the game is somehow even more gorgeous than the first one. The style is basically the same, with those fuzzy silhouetted creatures still flapping across the foreground while the beautifully weird backgrounds slowly scroll by. It just looks a bit sharper and more colorful this time around, with stunning lighting effects bringing everything to life and making the world feel real, super fascinating, and even a bit terrifying at times.

Beyond how amazing the game looks and sounds, there are also several new mechanics in certain levels that change things up in fun ways, like liquids, lasers, and searing white lights that instantly cook whatever they touch. There’s also a super fun new wheel ability that lets you roll across the ground at high speeds, which is a welcome distraction from all the flapping. 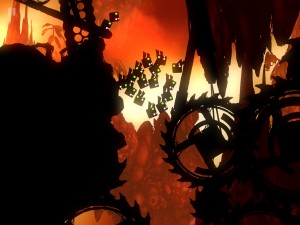 The main difference, though, is a bit of a game changer. Part of the reason the original worked so well is that the only input you needed was a single finger, with no virtual buttons or tilting or anything crazy like that. You just tap. In the sequel, you have two inputs, triggered by tapping the left and right sides of the screen. This is because you can now move backwards, which may seem minor, but it changes the game in some surprisingly substantial ways. For example, by alternating your taps back and forth (or holding both sides of the screen) you can move straight up. It means levels can now stretch their legs a bit and wind around in all directions. (Gone are the days of automatically going left to right and being done with it!) There are tunnels that go high into the air and deep chasms to fall into, and it makes each level feel even bigger–and even more interesting–than the ones found in the original game. You can’t always go everywhere you want, though, since the screen still auto-scrolls most of the time and if you’re caught off screen you’ll die instantly. Still, the ability to go backwards and up and down is a simple addition that changes how the game is played and now feels pretty essential to me. 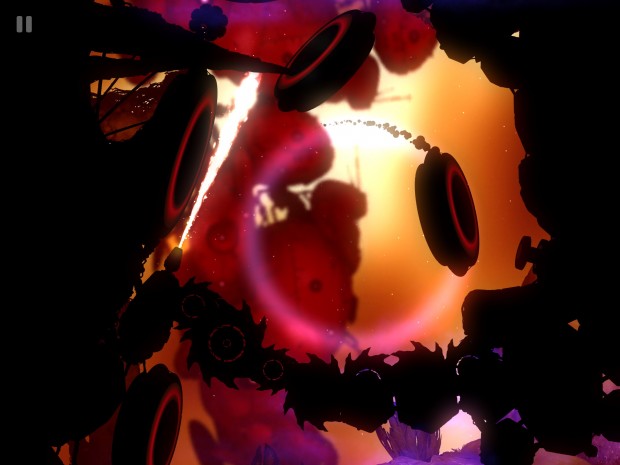 With that in mind, I can kinda see why they left local multiplayer out this time around. The left and right sides of the screen used to be for different players, and now they’ve been turned into forward/reverse controls for one. Still, I can think of a lot of ways around that: Give two players two corners each and split the screen so each person is oriented correctly, or let the other players use a MFi controller or some kind of free Badland controller app, or even slap some virtual buttons on the screen and let four people huddle around an iPad like before. None of those is quite as dead-simple and elegant as the first game’s brilliant multiplayer, but I wouldn’t be surprised if they added it anyway at some point in the future. Heck, they could even go back to one-tap controls for multiplayer only and everyone would probably be happy.

So yeah, the multiplayer is missing, there’s no level editor, there’s no community created content, and there are roughly a zillion fewer levels this time around (so far). Plus, the game’s single new mode only loaded for me one time. Even still, Badland 2 is prettier, more interesting, and even more fun to play than its predecessor. The addition of new mechanics changes up the gameplay in wonderful new ways without sacrificing an ounce of what made the original such a standout game in the first place. That right there is a five-star game, my friends, and that’s not even considering what the future holds for the sequel to one of the App Store’s most updated games of all time.