There’s something to be said about striking the cultural zeitgeist at the right time. Power Hover ($3.99) drops right when people are getting into hoverboards, what with the fascination over this being the year that Back to the Future Part 2 took place in, and those little scooter things that are called hoverboards despite not actually hovering. But I guess they have no better name. Point is, hoverboards are blowing up. Literally. And Power Hover is here to be an entertaining game where you race through deserts, on the ocean, and through tubes, on a hoverboard. It’s solid if not amazing, but fun for the time you’ll sink into it. 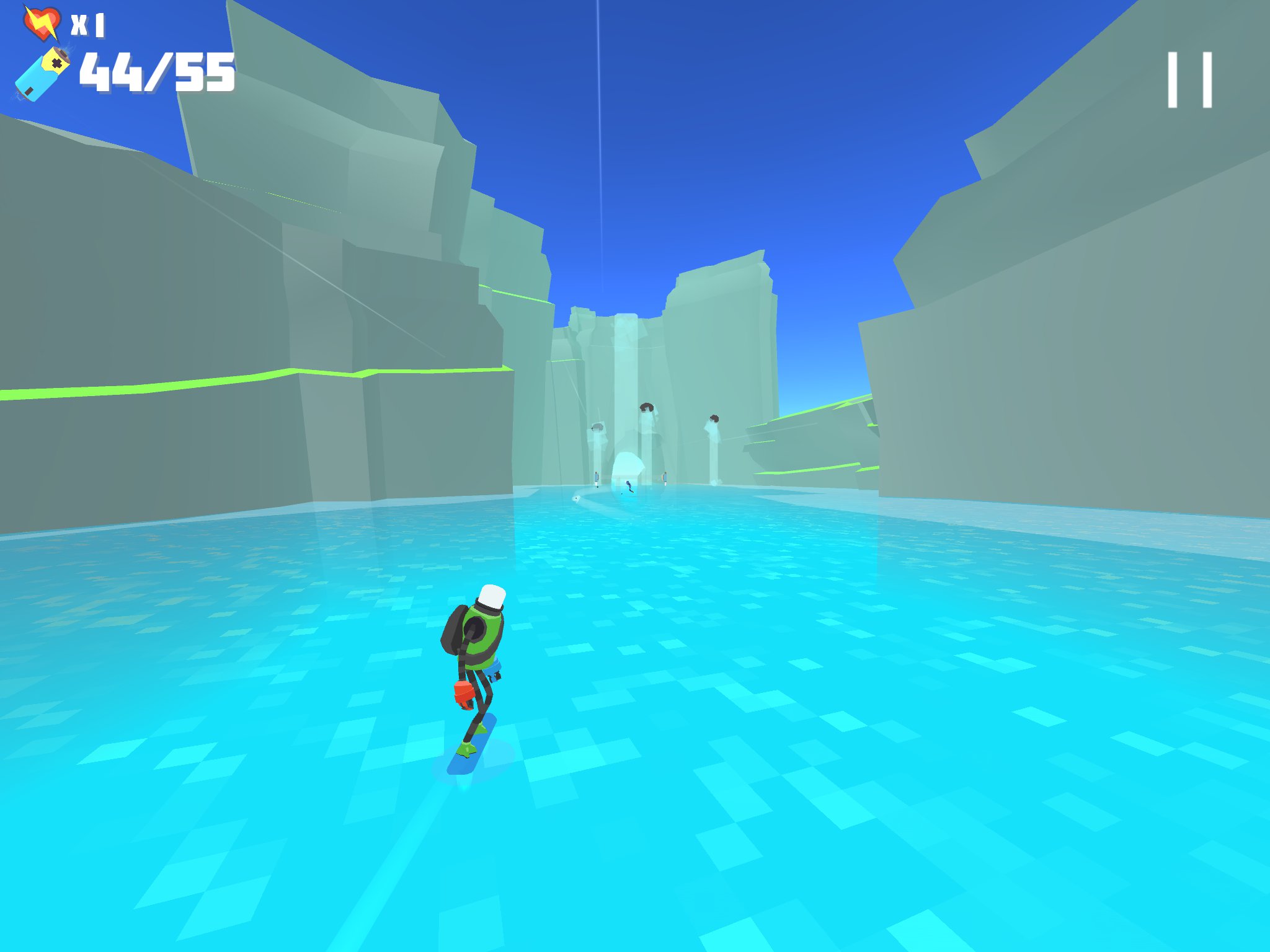 The core of the game is level-based, where you’re trying to make it to the end in one piece. You collect batteries that will go toward your star rating, with greater rewards in terms of energy bolts, the game’s currency, for better star ratings. The batteries are in fixed positions each run, but you’ll occasionally be pursuing a mysterious figure who drops the batteries, and the occasional bomb, so you need to react quickly or learn the level layouts. Getting 3 stars on most fixed levels is doable through effort; getting 3 stars on the endless levels requires some real patience and skill to get far enough to get the better ratings. Good luck with that!

The levels present a fantastic amount of variety, not just in terms of environments, but in terms of elements in those environments and how they play. Indoor levels will force you dodge lasers and other traps. Tubular levels make you deal with realizing which direction you’re spinning in, and how you perform in the new environment. You’ll have levels with more of a cinematic feel, as they shift the angle of the camera to be more dramatic, as you dodge giant creatures, and see more of the wild expanses ahead. The game’s story is told through optional tape players you find on the world map, though it’s easy to miss them. 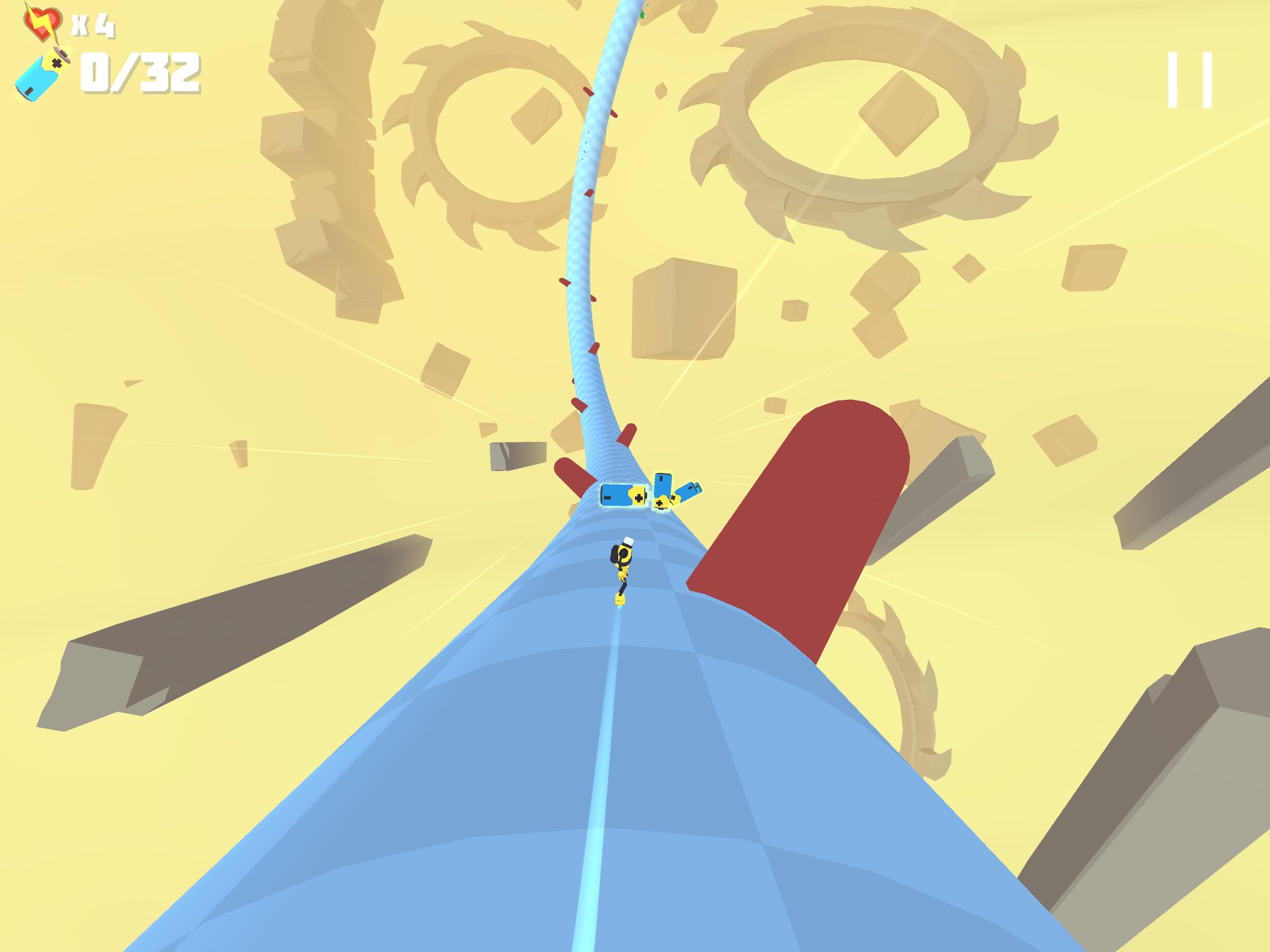 The hoverboarding has a particular physics and resistance to it, where you’re not just moving freely left and right, but you have some momentum and weight as you move in a direction. Move very quickly from one side of the screen to the other, and you’ll find it difficult to shift back to the other side. I don’t know what real-world hoverboards, if they ever exist, will feel like, but this feels like it would be close! You just have to tap and hold on either side of the screen to move left and right, but you have good control over your hoverboard.

It feels a lot like Power Hover was aiming for free-to-play, with the game being based around getting three stars on levels, with wait timers for some of the in-world things like extra lives that you can collect, and the level gates. This could just be that the game decided to use the elements that free-to-play games otherwise tend to incorporate, in order to feel familiar to casual players. Or, it could be that the game was going to be free-to-play and then a pivot was made at some point before release. Either way, you probably will recognize the exoskeleton of the game, but will be pleased that the upgrades to your starting life count and continues don’t cost too much, you just have to get three stars in more levels. 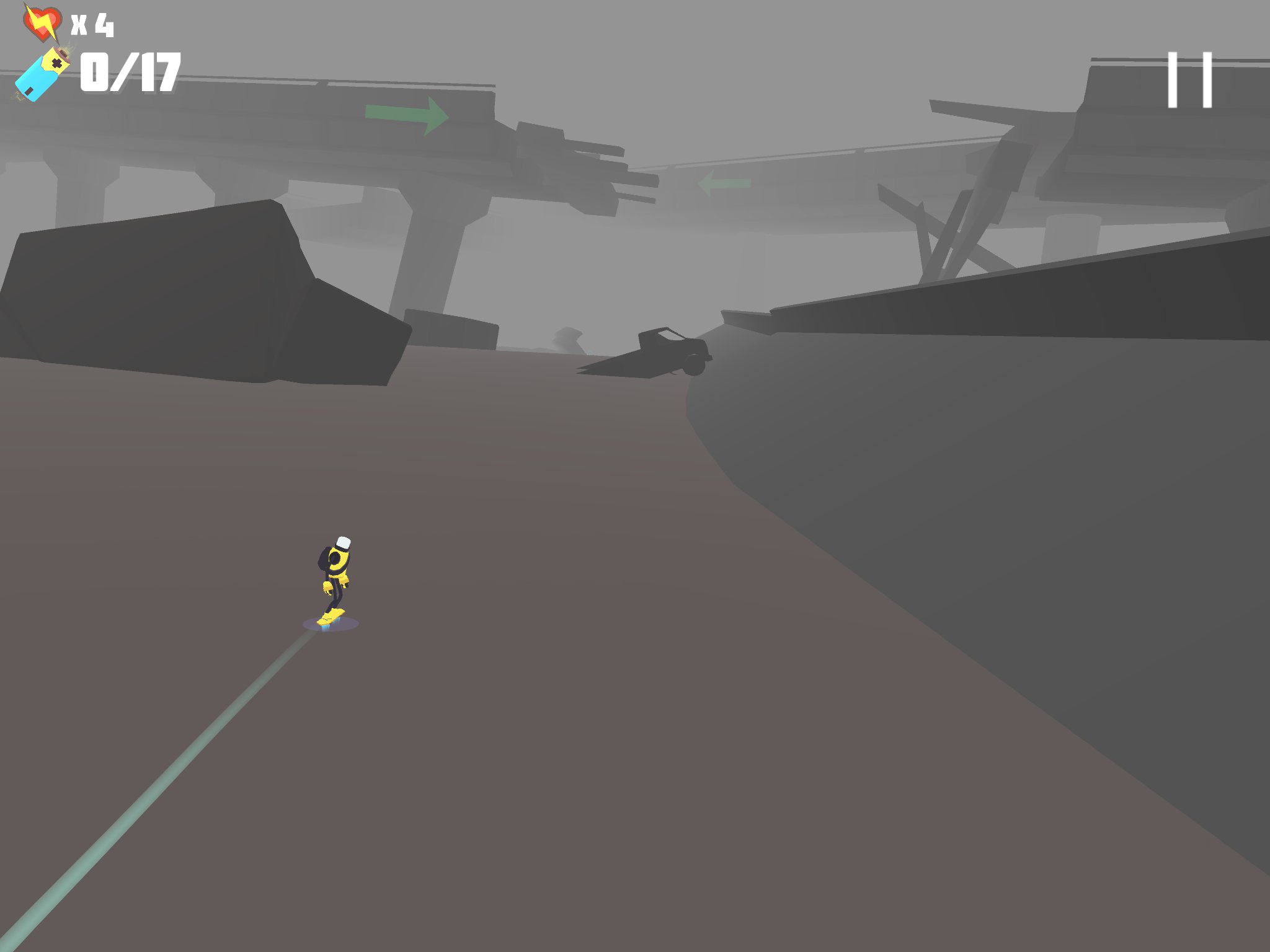 I think my opinion of Power Hover can be summed up in the way I feel about the game’s visuals. The graphics are kind of spartan, but effective. I don’t know if the game was going for a low-poly look, or if the whole thing just wound up feeling like it was empty and without a whole lot of detail, but it kind of works? The game has 20 levels, and 3 of them are endless, so the game kind of feels short, but maybe it’s the perfect length? I wouldn’t mind more to Power Hover, but if this is all I get to play of the game (though more is teased), I feel like I got a satisfactory experience? The game itself is pretty basic, with the ability to just go left and right, and maybe swipe to do the occasional trick in the air, but does it really need more?

Power Hover is just a solid little game. It’s a bit spartan, but not in a bad way. It could be bigger, longer, and more detailed, but what would the return on investment be? This is just a pretty fun, well-made game for a few bucks. If it intrigues you, check it out.