1080 Snowboarding, guys. I spent more time playing that on the Nintendo 64 than any other snowboarding game to date. It came out around the time Tony Hawk’s Pro Skater debuted, and I was basically obsessed with “extreme sports” in video games. Not only was it one of the best-looking and smoothest N64 games of its day, it was also ridiculous amounts of fun. Unfortunately, I missed out on the sequel (never had a Game Cube) and somehow missed the SSX craze as well. In fact, the only other snowboarding game I can recall being super into since then is the recent Alto’s Adventure ($4.99), which belongs to a completely different genre altogether. It’s something I hadn’t really considered, but when I first started playing Ratrod’s Snowboard Party 2 ($14.99), I finally realized how much I missed carving down the slopes in 3D while pulling off crazy tricks. 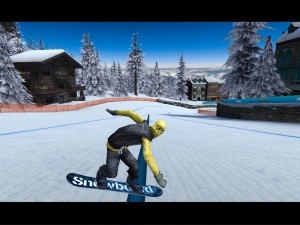 Maybe it’s unfair to compare a classic game from Nintendo to a two dollar mobile app, but I do it out of love. Snowboard Party 2 really does bring me back to those days spent playing 1080 for hours on end, and it feels pretty magical. Of course, Ratrod isn’t Nintendo, and there are some issues with the game. We’ll get to that later; for now, let’s dive right into how this game works.

Basically, you’ll know what you’re getting by just glancing at the screenshots in the App Store. You choose your rider, a board, and a course, and after some brief loading times the game spits you out on top of a mountain. From there, you let gravity and momentum do most of the talking and you just slide around and jump off stuff. It works really well, and the game has a decent sense of speed for what it is (I mean, you’re a guy scooting down a hill, not an anti-gravity ship). 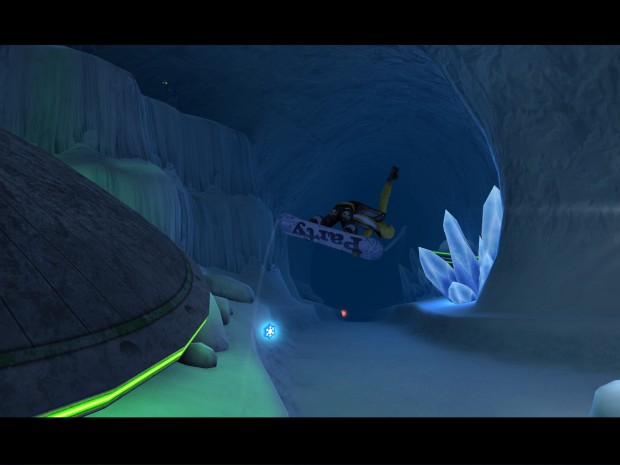 What’s really impressive about Snowboard Party 2 is the amount of things you can do. Maybe I’m too used to your typical shallow free-to-play racers and stuff, but the five modes on offer here seems super refreshing and generous in comparison (especially for only a few bucks!). The main one is Freestyle, which is a pretty standard “go fast and do lots of tricks” mode. From there things get more specific, with Halfpipe (more trick-focused, with shorter tracks made up almost entirely of half-pipes), Big Air (lots of ramps, jump jump jump), and Time-Attack (carve your way through a bunch of flags and try to get to the bottom as quickly as possible). On top of that, there’s a multiplayer mode that lets you join or host a game in whatever mode you like. 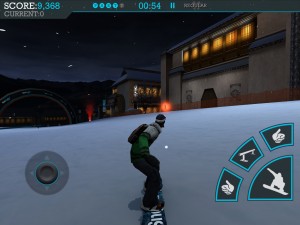 Control-wise, the game is about as good as it possibly can be (for better or worse). On the left, there’s a stick for controlling movement, and on the right there are four buttons: jump, grind, and left and right grabbing. There are tons of options to customize things exactly as you like, and you can even forgo the on-screen sticks for tilting if that’s your thing. Of course, the best way to go is with an MFi controller, but most people will probably have to get used to the touchscreen. It all works pretty well, but I never felt like I had quite as much control over my rider as I would have liked with the on-screen controls. Again, I think it’s probably as good as it can be, but if you have a controller lying around you might have a slightly better time. 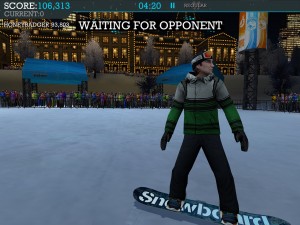 The game has a few other tiny problems as well. For one thing, multiplayer can be kind of a drag if you don’t get to the bottom of the hill at the same time as your opponent, as you could be waiting several minutes just staring at your character. Another problem I had a few times was getting stuck on flat surfaces while trying to find the hidden letters. It’s super frustrating when you’re trying desperately to get moving back down the hill and you don’t have any momentum or anything to get you out of your stand-still. Also, despite being “premium” the game has lots of options to buy XP (the game’s currency) with real money to buy better equipment and stuff. It doesn’t bother me in the slightest as I just ignored it and was able to buy the most expensive character after saving for only a few days, but I know some people around here really hate IAP in paid games so I thought I’d mention it anyway.

Honestly, I was not expecting to like Snowboard Party 2 as much as I did. I didn’t think that carving through snow would be anything but frustrating with a touchscreen, but I was (mostly) proven wrong. I have a hard time imagining virtual controls working any better than they do here, and you can always use a controller if you’ve got one. The few problems I had were exceedingly small and nit-picky in the grand scheme of things, and I think the game is a complete steal at only two bucks. (I know I should be used to it by now, but seriously, the value is nuts if you think about it.) The game has great graphics, smooth gameplay, and an absurd amount of content for a mobile game. Best of all, there were moments in the game that brought me back to playing 1080 as a kid, and I can’t think of any higher praise than that.