It’s been a really, really busy year for Nitrome, and they’ve got one more game to release before calling it a 2015: their roguelike Rust Bucket is releasing this week on December 17th, as a free ad-supported game with IAP to remove the ads. The bulk of the game is the endless mode, which gives you a point for each room you make it through, with coins to collect that right now serve as a sort of alternate score for you taking the risk to hunt them down. But they are being added to a running total and collected for some purpose. 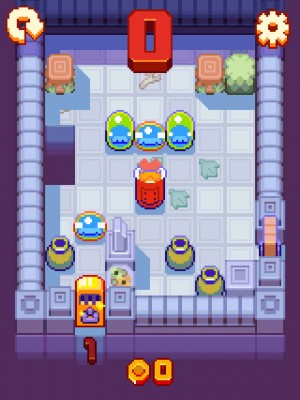 The game is turn-based, where you make a move and the enemies, who all have specific movement rulesets, all then taking their turns. The game is inspired by Nitrome’s earlier Flash game Turnament and designer Aaron Steed’s Ending ($1.99), who programmed this game, so if you liked those, this is kind of the conclusion of that trilogy. Though, this is a much brighter game than Ending was. The game is gorgeous, with that familiar Nitrome art style, which belies just how brutally challenging it can be, as you have to track several enemies at a time, and use limited resources along with your bopping to stay alive.

The game starts off by throwing you into a lengthy tutorial, but you shouldn’t look at it that way, more as a mini-campaign to play through that teaches you how to play the game while also legitimately testing your skills and learning how the game works on your own terms. There’s future content planned beyond the tutorial campaign and endless mode, with a mode locked away that from its icon suggests that it might point to a level select, which would be cool to have. But regardless, there’s some fantastic production values here already, and the game promises a brutal challenge for you in the endless mode. Check this one out when it releases this week.