The long road of Crashlands development is finally coming to an end on January 21st, 2016. That’s really close! But also really far away if you’ve been dying to get your hands on Crashlands during the past couple years of its development. As a way to ease the pain of these last five weeks of waiting, Crashlands developer Butterscotch Shenanigans suggests getting a head start on unlocking some bonus content in Crashlands by completing quests in their previous iOS games. Those games are: Quadropus Rampage (Free), Towelfight 2 (Free), Flop Rocket (Free), and Roid Rampage (Free). The perks and how to unlock them are as follows: 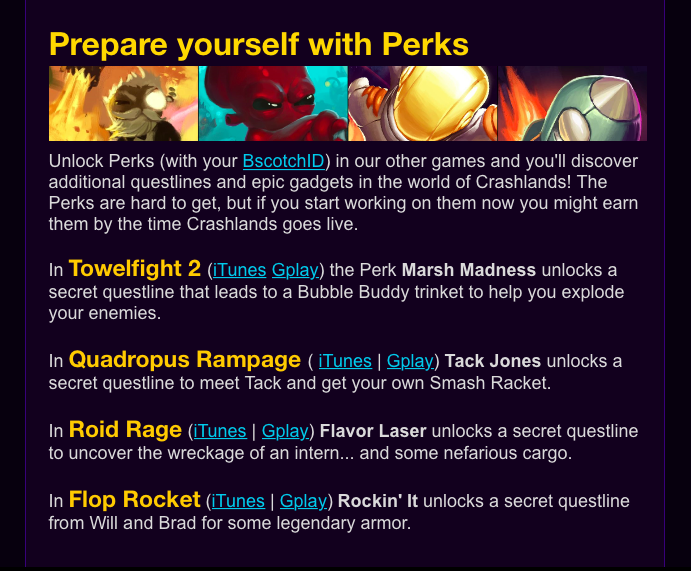 The Butterscotch bros are able to have this fancy cross-game content unlocking system thanks to their impressive BScotchID system, which they created from scratch precisely in order to have cross-platform functionality across desktop and mobile platforms for all their games. If you don’t have a BScotchID yet, you can sign up for one here, and I’d highly suggest doing so. Not only is there unlockable bonuses for the upcoming Crashlands, but there’s tons of unlockable stuff across all their games through BScotchID, and I’ve had a ton of fun over the past year or so since they created the system chasing after various unlocks and achievements in the entire Butterscotch library. And hey, all their games are free, so why not? Look for Crashlands to launch across iOS, Android and Steam on January 21st.