Clearly, Fizzpow and Noodlecake hit on something special with Bitcoin Billionaire (Free). It certainly wasn’t the first clicker ever, or even the first on the App Store. Still, it seems to easily be one of the more influential of the bunch. Just about every clicker that comes out these days has the same combination of upgrades, investments, random card draws, and opt-in video ads. It’s a great formula, and I’ve sunk an embarrassing number of hours into Billionaire over the last year or so. Still, when I reviewed Muchos Tacos a few months back I quietly decided not to try any more clickers unless one did something new and unexpected. (And sadly, folding tacos instead of tapping just doesn’t do it for me.) In fact, the only reason I downloaded Animoca Brands’ Groove Planet (Free) at all was because I didn’t realize it was a clicker. And while it does adhere to the Billionaire formula fairly closely, thankfully it does have one rather novel trick up its record sleeve. 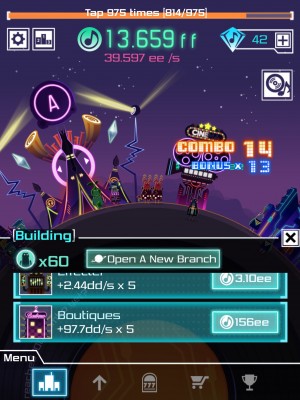 I’ll just come right out with it: Instead of jabbing the screen randomly with your greasy digits, you’ll be jabbing the screen to the beat with your greasy digits. (Seriously, wash your hands, bro.) It may seem like a small difference on paper, but it actually makes the tapping considerably more enjoyable–for me, anyway. I’ve been a drummer for nearly two decades, so I’m always rhythmically tapping on things anyway.

It works because in other clickers it’s easy to view tapping your screen as a chore. Most of them reward you for tapping as fast and long as possible, which has never seemed remotely fun to me. In fact, sometimes it can kinda hurt after long periods. (I enjoy the “investment” side of these games far more.) It really doesn’t seem like tapping to a beat should be much better than tapping randomly, but it’s easy to get into a groove and feel almost like you’re dancing. In fact, sometimes I do dance a little while playing. Don’t judge. 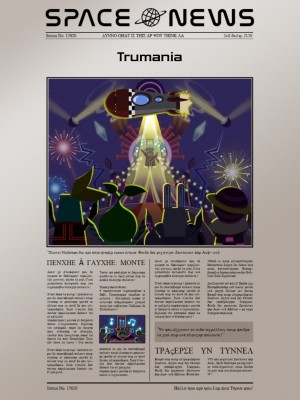 Two things make this satisfying: First, when you lock into a beat and are happily tapping away, your tap multiplier starts going up, and up, and up. It’s actually really crazy how much you can earn (“notes”, by the way, are the main currency here), especially when you’re tapping for several minutes and have like 300+ consecutive taps under your belt. The second reason it works is simple: the music in this game is absolutely killer. When you first download the app you’ll have several free songs included that are incredibly catchy and dance-y. The game is well aware of how good its tastes are, too, because if you stop tapping for 20 seconds it’ll go into “listening” mode and take away the menus so you can chill. If you don’t like the music it comes with, though, you can always load up some songs from your own library (provided you have one and don’t exclusively use Spotify or something).

Interestingly, the game also displays the chord of whatever song it’s playing (even your own songs!), which is totally unnecessary but super cool. It seems to have trouble with accuracy sometimes, but considering it’s only meant as a fun bonus and doesn’t effect gameplay at all, it’s still a really nice touch. Likewise, the color of the sky changes based on the key of the song. Neat! Another interesting thing is that it doesn’t seem to matter if the beat you’re tapping matches the song playing–just as long as your taps are consistent. For example, I racked up huge scores while listening to Christmas music on the couch with my iPad’s sound muted. I doubt the tempo of whatever the game was playing was exactly the same as Frosty the Snowman, but it still worked perfectly. 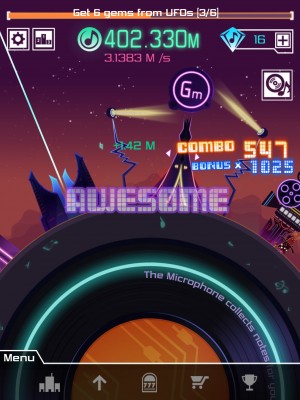 The investment side of things (and the rest of the game in general) is pretty good, too. I’m not sure what more to say about it, as it’s very typical and if you’ve played anything like Bitcoin Billionaire in the last year or two you’ll know exactly how everything works. You unlock buildings that “tap” for you, and then upgrade those buildings. Every once in a while a UFO will fly by and you can tap it for a burst of notes or a gem. Sometimes you’ll be asked to choose one of three cards that will give you something good or bad, which you can then double or skip with a video ad. Every few minutes you’ll get a new objective that will also give you stuff. If you get far enough, you can restart the whole thing from scratch with a bonus percentage to earn notes faster. None of this is bad, and the fun cartoon-future visuals help things stand out a bit, but it’s definitely all very familiar.

Unfortunately, as fun as the game is, it’s also a bit buggy. Sometimes the game will randomly “miss” notes while you’re tapping, especially if you’re tapping in quicker 8th notes. Much worse was the time the game froze and then completely stopped working altogether. I had to delete it, redownload it, and start over (losing several days of progress) before I could play again. Maybe it’s related to that stupid Game Center bug going around?

I have kind of a love-hate relationship with clickers. Most of the time the investment side of these games can be pretty rewarding in short bursts, but unfortunately, the actual “clicking” is usually about as fun as counting gravel. I can honestly say that Groove Planet is the first game in this genre where I actually have enjoyed the clicking, and that’s really saying something. It’s so fun, in fact, that I kinda wish they’d taken the concept even further, like allowing menu clicks to count as part of the beat so you never lose your combos, or intelligently recognizing different rhythms so you can improvise your own “tap solos” (as long as they stay in beat, of course!). That’s probably a bit too complicated to implement, and anyway, what Groove Planet does already is pretty outstanding. It’s a clicker that was clearly made by people with a deep love and understanding of music, and because of that, it just might be the most satisfying one I’ve ever played.