Geometry Dash ($1.99) is a crazy phenomenon. This super difficult speedrunning platformer has taken the world by storm, topping the iTunes charts and being so popular it was the first game we opened a dedicated forum for back in September (and incredibly, that hasn’t stopped the regular old forum thread from continuing to blow up). The last big update for Geometry Dash was the version 2.0 update in August, but now developer RobTop Games is teasing on Twitter a “secret Geometry Dash project" with this image. 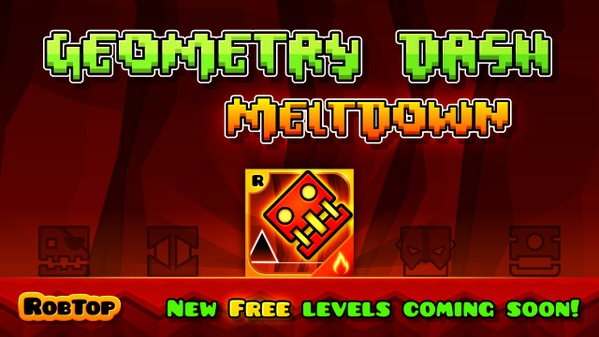 It sounds like the update love for Geometry Dash hasn’t slowed down with version 2.0, as “new free levels coming soon" sure sounds like an update to the existing game rather than some sort of separate spinoff. However, it could also be a new free version of the game as a way to drum up more interest in the existing paid and lite versions. Who knows! And I’d guess lava or hot surfaces or volcanoes or other type stuff may be involved, based on the art style of the teaser. Sounds cool! I mean hot. For more information on Geometry Dash Meltdown, keep your eye on RobTop’s Twitter or the afore-linked forum threads and we’ll let you know if we hear anything new as well.