I picked up an iPad Pro from my local Apple Store this morning, which was largely uneventful aside from the bafflingly inefficient system they had of retrieving web orders. But, hey, it wouldn’t be an Apple product launch without some kind of weirdness, right? If you too go to an Apple Store today, even just to look, you’ll see a load of iPad Pro’s on display. I’m not sure how anyone can walk away with a first impression that’s any different from, “Wow, this is comically large." Unboxing my iPad Pro and getting it in my hands for the first time brought all the memories of the original Xbox rushing back, as everything about that console (particularly the launch day unit) from the size of the Xbox itself to how huge the controller is just felt absurdly huge. In the case of the iPad Pro, that’s the whole point though, isn’t it? Hell, the iPad Pro is so big it makes my proper MacBook feel small in comparison. 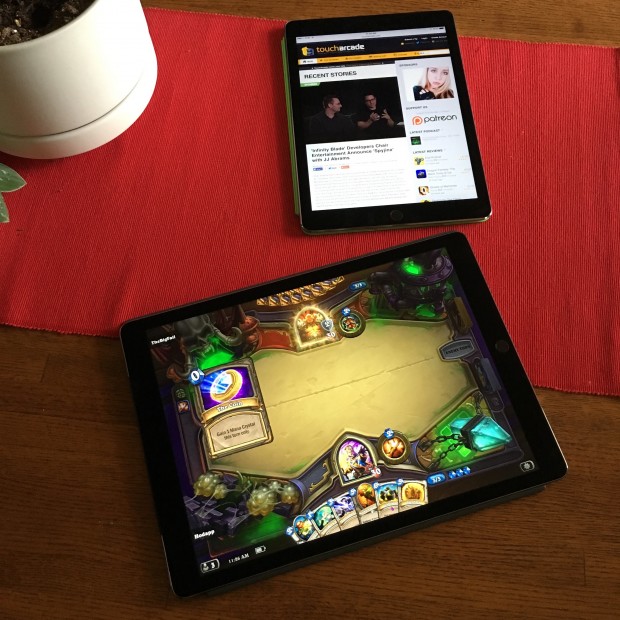 If you want a good size comparison without leaving the house, look around for a normal sized magazine. For whatever reason I’ve got an issue of People on my coffee table, and the screen of the iPad Pro is basically the exact same size. Add in a little extra around the edge for the bezel, and there you go. I know it’s super cliche to describe Apple products as “magical," but it’s hard to really come up with another way to convey how it feels to be holding a screen this huge, in your lap, with nothing connected to it. It’s like being in a Sci-Fi movie, particularly when you start doing more with it than looking at the home screen and gawking at how huge and high resolution it is.

It feels a little on the heavy side when compared to the iPad Air 2, but, the Air 2 is a pretty svelte device and this is almost twice as big so the difference in weight makes sense. It doesn’t feel heavy for its size, but if you’re used to carrying around the iPad Air 2, the iPad Pro will feel considerably more hefty. Once you’re done taking in the screen, size, and weight, the next big realization comes from just how insanely massive the difference the included four speakers make over the iPad Air 2’s… one speaker. Everything instantly feels so much more immersive without headphones. Four are (obviously) louder than one too, and while the bass response isn’t fabulous, the iPad Pro seems to be capable of putting out just as much sound as most of the smaller-sized external Bluetooth speakers I’ve used like the original Jambox.

The iPad Pro seems like a pretty great device to consume media with other people. Sure, you could always huddle around the original iPad, but the screen was just on the border of being too tiny for two people to watch comfortably unless you’re sitting super close. Similarly, the sound was always too quiet and the best way I came up with to fix that involved a pretty awkward setup with two pairs of headphones and one of these battery powered headphone amplifiers. 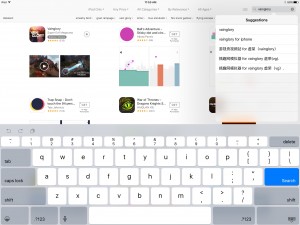 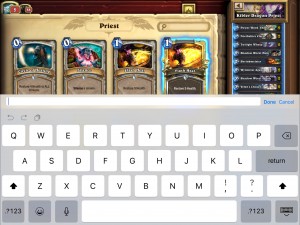 The inevitable downside of the iPad Pro on launch day is exactly what we’ve experienced before when Apple introduces new screen sizes or resolutions. Apple stuff predictably works great, everything else… Not so much. When you’re using an Apple app that supports the iPad Pro and its multitasking capabilities, it’s all really cool. However, if you want to use something other than effectively the things that come loaded on the iPad Pro like Safari, Apple Mail, Pages, etc, you get the super-gross up-scaled keyboard and other on-screen elements that seem to be rendered with the “normal" iPad screen size and resolution in mind and blown up. If you went from the iPhone 3GS to the iPhone 4, any iPhone 4 to any iPhone 5, and so on, you’ll know exactly what I’m talking about. This kind of thing is almost always temporary, and aside from a few totally forgotten and no longer supported apps, it seems like developers are pretty quick to fix these problems- Or, at least, that’s how every other transition has been.

As far as all the multitasking and other stuff is concerned, I’ve seen a lot of people try to argue that devices like the iPad Pro are “laptop killers" or any number of other ridiculous things. The cool thing with this is, all the hardware is there. The iPad Pro benchmarks faster than Apple’s recently released MacBook. The Smart Keyboard (which ships in a few weeks) adds a real, physical keyboard. The only thing left is software, which can always be updated and tweaked over the years. The current implementation feels like a few babysteps towards where it needs to be, but it’s hard to imagine anyone truly leaving their laptops behind anytime soon. I mean, I was able to do my job exclusively on my iPad Air 2 (especially when paired with something like one of the keyboard cases out there, but it always felt like a bit of a chore.

Doing my job involves a mess of windows all over my desktop including multiple Safari tabs, a few different chat clients, email, Evernote, iTunes, and other random utilities. All these functions exist on the iPad, and you can sort of Alt+Tab between them all, but, it feels like a clunky solution to a problem that’s already solved by just using a laptop. Splitting my screen between two apps (and having decent real estate in each) feels like a stopgap solution to Apple coming up with something better. 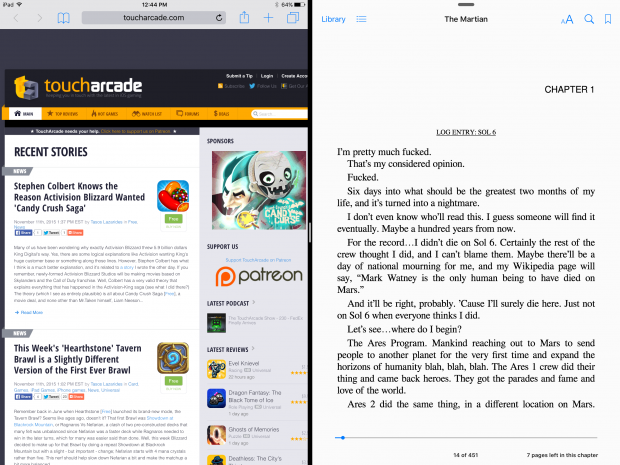 As far as games are concerned, again, the differences are basically what you’d imagine from what I’ve already described and from things you’ve likely experienced on your own by upgrading to a larger TV to play console games on. Games like The Room Three ($3.99) automatically get more immersive, particularly when you add the four speakers into the mix. Games with a lot of stuff going on like Vainglory (Free) get easier to see and things are easier to tap on. Hearthstone (Free), of course, is awesome on the iPad Pro as well. The other games I’ve tried all run well, and look cool on a larger screen, but I’ve yet to really see anything that seems like it takes advantage of the higher resolution display yet (which makes sense since developers are also getting their iPad Pro’s to test on today). Tilt games always feel a little clunky on the iPad, and when you add the size and weight of the iPad Pro into the mix it’s just insane. Playing Doodle Jump HD ($2.99) feels like driving a bus.

It’s hard to really say what the “best" iPad Pro games are going to be, as nothing has really been updated yet and nothing seems to really take advantage of the faster processor aside from just running well anyway… But, all games ran great on the iPad Air 2, so it’s not like there’s some massive performance difference to speak of just yet. The 4GB of RAM does make app switching pretty crazy, as you can switch in between huge, visually stunning games without them needing to reload anything.

I wish I could comment on the Apple Pencil or the Apple Smart Keyboard, but aside from just fiddling with them briefly at the Apple Store I don’t have a whole lot to say. My particular Apple Store only seemed to get one Apple Pencil and a couple Smart Keyboards, so I didn’t have much time to do anything beyond be like “Yep, they work like the keynote" with a bunch of people also waiting around to try them. 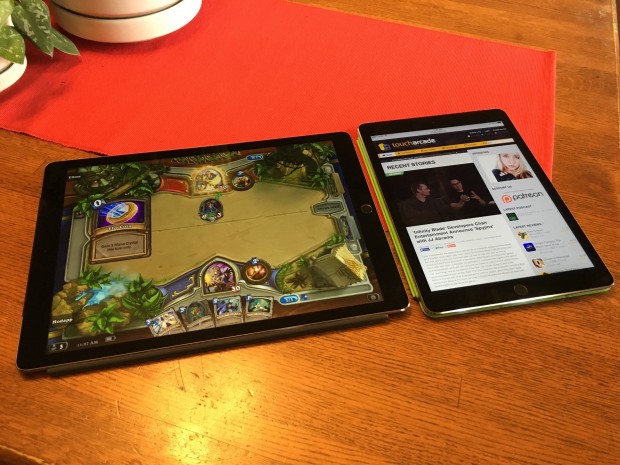 I think the iPad Pro is a really cool addition to the iOS family of devices. It may be a little less portable than the iPad Air 2, but it’s not like the iPad Air 2 was that tiny. Besides, people have been carrying around magazines for years, and most bags have a magazine-sized pocket (the ones I use do, anyway) so it’s not like the iPad Pro is going to be that crazy to haul around instead. It’s neat that Apple’s lineup is so expansive though, between wanting a tablet with loads of portability in the iPad mini to the iPad Pro which feels like it’d probably live most of its life on your coffee table or somewhere else inside your house where it’d make sense to grab it and use it for a while. If you don’t care about the huge screen, the better speakers, or the increased performance (which nothing seems to really utilize yet), the iPad Air 2 really does feel just right.

However, if you’re all about everything iOS like we are, the iPad Pro should be somewhere near the top of your Christmas list this year. By then most apps should be updated to support the iPad Pro, and developers likely will have figured out just how much they can ramp up their graphical settings in games.