Between Horizon Chase (Free) and Kalin Krastev’s Moto RKD Dash (Free), it seems there’s been a bit of a resurgence in retro racers lately on iOS. Which is totally fine by me, as one of my earliest gaming memories ever was playing Pole Position on my parents’ Atari. Dash apparently takes its inspiration from a series of old motorcycle games that spanned a number of mechanical, arcade, and LCD handheld systems involving a motorcycle sliding back and forth avoiding other motorcycles. I’d never actually heard of any of those old games, but watching youtube videos of Sega Moto Champ in particular was certainly illuminating. Anyway, Horizon Chase ended up being a great throwback that worked surprisingly well on iOS, so what about Moto RKD Dash? 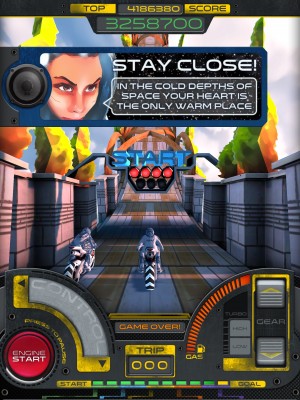 Spoiler alert: It’s also pretty fun! It’s also not quite like anything I’ve played before. Each level is basically like the Discovery One centrifuge from 2001: A Space Odyssey. The environments spin round and round in a perfectly straight circle (though it often tilts a little), and your job is to get to the finish line before running out of gas. Unfortunately, there are a bunch of other motorcycles on the same hamster wheel, and they aren’t particularly fond of letting you pass. Actually, they seem pretty indifferent to your bike overall, but it’s certainly not easy getting around them. Often they’ll strafe back and forth across the road or ram into you from behind, and most of the game’s challenge comes from trying your best to avoid them.

Luckily, the controls do a pretty good job of translating your movement through the touchscreen while staying out of your way. There’s a big red “start” button that you push at the beginning of each level, and once your motorcycle starts moving forward you can begin shifting gears. Buttons for that are on the right, and basically you’ll just want to shift up as fast as possible so you’re going “turbo”. Once you’re blazing down the road with reckless abandon, you can begin dodging other bikes by tapping (or sliding) your thumb on the left. You can also simply tap either side of the screen if you’d rather do that, and either method works pretty well. 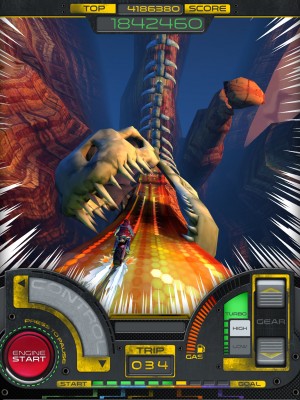 As far as the actual racing is concerned, the best advice I can possibly give is–as I said earlier–to shift up to your top speed as soon as possible. If you don’t, you’ll be under constant attack from the rear (settle down, children) as the other bikes start ramming you and killing your speed. It’s incredibly frustrating when you get caught in a loop of getting hit, slowing down, trying to speed up, getting hit again, slowing down, etc. It’s best if you can just keep going turbo for the entire time, really. (Plus, if you can manage to race an entire track without getting hit, you’ll get a bonus continue!)

Continues? Yep, just like in the old days. You start with three, and you have to try and beat every track in a row without running out of them. If you do run out, you’ll have to start over from the beginning. Luckily, there are only nine tracks and they generally last under a minute so it’s not a huge blow when you have to go back to square one. When you finally do get to the end of the game, you’ll be treated to an extra bonus level that sees you racing against only one other person while apparently falling in love with them. (And if you manage to beat that one, you’ll also unlock an endless mode that’s basically a recreation of one of the old LCD games that inspired Dash.)

Some of that probably sounds pretty weird, and it is, a little. But it’s a good kind of weird, and that otherworldliness can be found in many of the levels even before the ending. On one track, you’re racing through a giant set of dinosaur bones and all the other bikes have been replaced with wolves. In another, you’re flying through a city block that feels like someone built Mario Kart’s Delfino Square track in the world of Inception. Tying all of it together is an absolutely gorgeous visual style that’s slick and colorful, and it looks great as you zoom through it at high speeds.

I wasn’t sure what to expect when I first started playing Moto RKD Dash, but I’m glad I did. Despite being based on a very old concept, it winds up feeling incredibly unique and fresh on modern devices. It’s a little short, and can be pretty frustrating when one tiny mistake leads to endlessly being rammed until you run out of gas, but I suppose that’s just more encouragement to get better. Overall, though, it’s a pretty fascinating little slice of motorcycle racing that’s not quite like anything I’ve played before.