Brothers: A Tale Of Two Sons ($2.99) is a tragic story about personal loss and the things we do to deal with those situations. For example, when Sony’s The Last Guardian appeared to have been canceled and designer Fumito Ueda left the company, I coped by replaying Ico and Shadow Of The Colossus. Starbreeze Studios, on the other hand, appear to have coped by creating this game, a gushing love letter to one of gaming’s most unique developers. It would have been easy for this to feel cynical or uninspired, but to its credit, Brothers generally feels like its own gorgeous thing, albeit with a few tips of the hat here and there. While I didn’t feel it quite hit the target it was aiming for, it’s still a trip worth taking.

The game starts by introducing us to the younger brother of the titular pair. He suffered a terrible tragedy while out on the water with his mother one day, watching her drown right in front of him. When we meet him, he’s attending to her grave, and it’s clear the incident still weighs heavily on him. Before long, his older brother comes to get his help. Their father has taken ill, and they need to bring him to the village healer. Unfortunately, there’s nothing the healer can do for their father without the water of the Tree Of Life. The brothers decide to go on the treacherous journey to help their father, a journey that will take them through some pretty incredible circumstances. 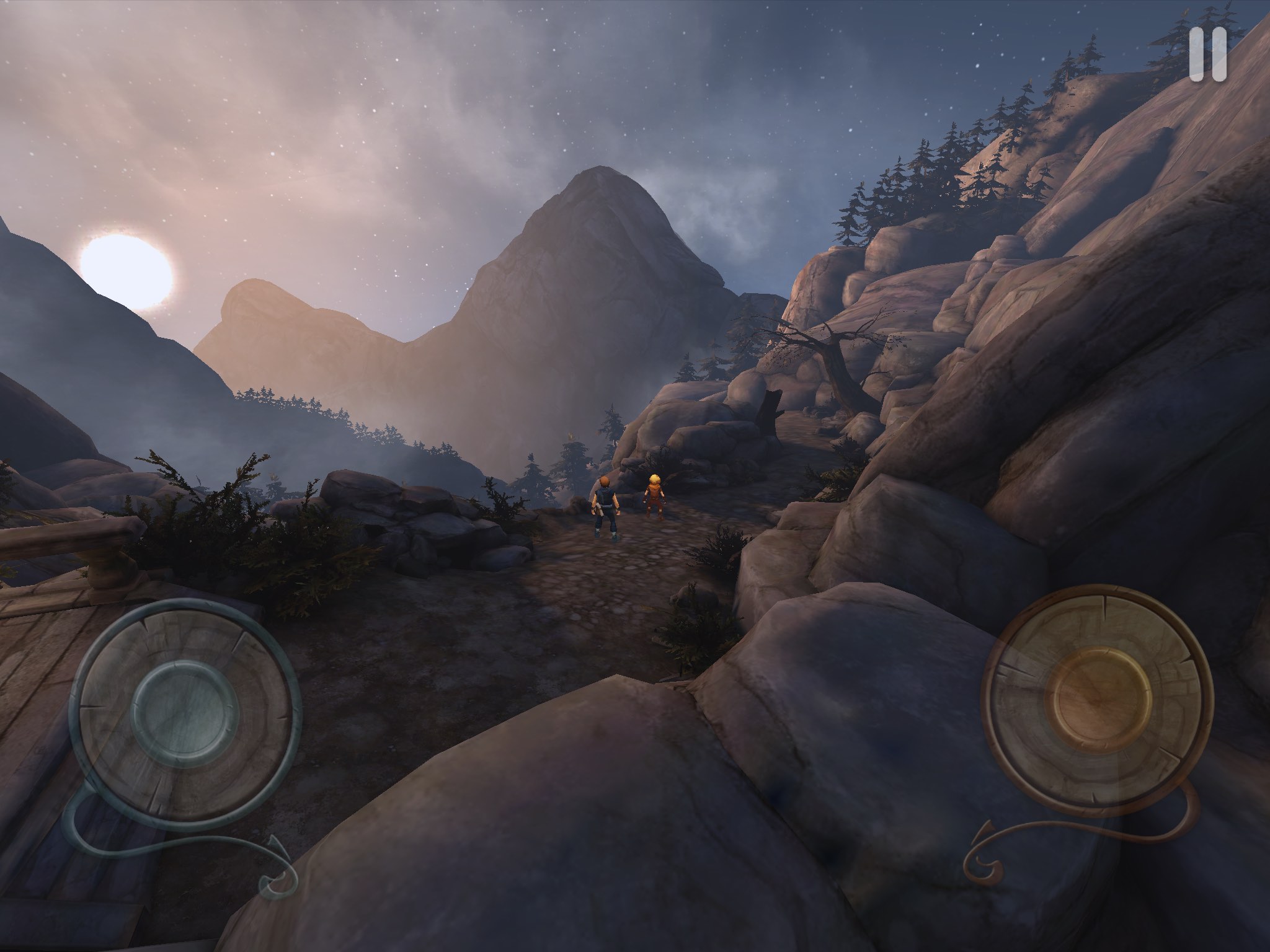 You control both brothers, which is sort of this game’s stock in trade. The left side of the screen controls the older brother, whose strength allows him to pull heavy levers, boost his little brother up to higher ledges, and swim like a pro. The right side of the screen controls the younger brother, who is generally quite helpless, but can slip through bars and assist his brother in a variety of tasks. Little brother’s trauma from his mother’s death has resulted in him being afraid of deep water, so whenever the situation comes up, older brother has to carry him on his back. The mechanics serve the narrative well, helping you feel the competence of the older brother and how much the younger brother needs to rely on him. It’s also used to great effect in the game’s many puzzles, though it can be tricky to keep the two characters sorted in your brain. Like the classic Ico, neither of these two can get where they need to go alone, so they must work together.

I should note that while I refer to the challenges in the game as puzzles, there is very little puzzle-solving to be done here. Since your characters only use a virtual stick and a single context-sensitive button to interact with the world, it’s pretty easy to figure out what they have to do at any given point. And since the world itself is quite linear and seems to only contain what you need to move on most of the time, it’s not hard to put these things together within a second or two. Brothers isn’t interested in getting you stuck anywhere along the road. It has far too much to show you to risk that. 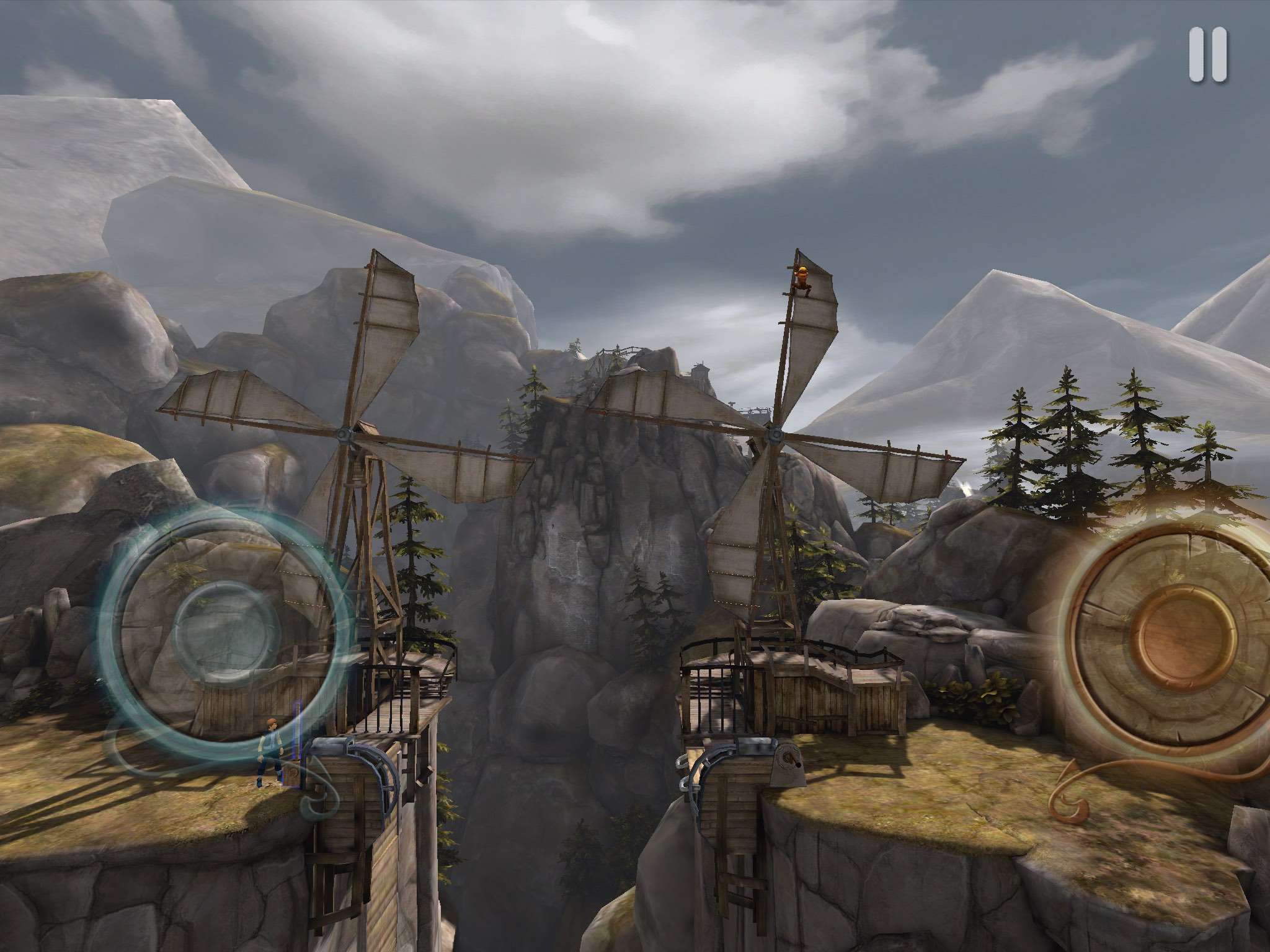 On the presentation side, Brothers could not be a greater success. While it’s not quite up to the standards of the console versions, this game is still absolutely gorgeous from start to finish. A lot of that is owing to excellent art direction, with almost every point of the game looking like it’s been deliberately framed. There’s quite a variety on offer, too, and a lot of it is simply astounding. I don’t want to spoil much, since the game is rather short as it is, but as an example, you’ll come across what was clearly the site of a battle between giants. Their fallen bodies are the obstacles you’ll need to traverse, and the water in this section runs red with their blood. I don’t think I’ve ever seen anything quite like this in a game before, and it’s only one of several sections of Brothers that evoke that same sense of wonder. On the audio side, the game opts for a made-up language that allows your imagination to fill in the details, which is another useful trick the developers probably picked up from Ico. The soundtrack is powerful, though at times it’s almost a little too overpowering, hammering in some of the game’s emotional spikes with a little too much strength.

Brothers divides its eggs between two baskets. The novel control scheme helps to keep the game interesting even while the obstacles themselves are a bit rote, and it even ultimately tries to tie into the narrative itself. It doesn’t quite work as well on mobile as it did on the other versions, and not for a lack of buttons but rather a lack of trust in the player at a crucial moment, but I can’t really say more without spoiling important things, so I’ll leave it at that. The other basket is, of course, the story, and I’m of two minds about it. I think the main plot doesn’t work nearly as well as it’s trying to. The emotional climax feels absurdly slipshod and unearned for something the game was clearly leading up to for its entire run. Then there’s the denouement, which in other versions contains a moment that seems to be the game’s crown jewel. That’s the moment I was referring to a few sentences ago, unfortunately. It still has some oomph, but not really enough to wash away the distaste of the botched climax. 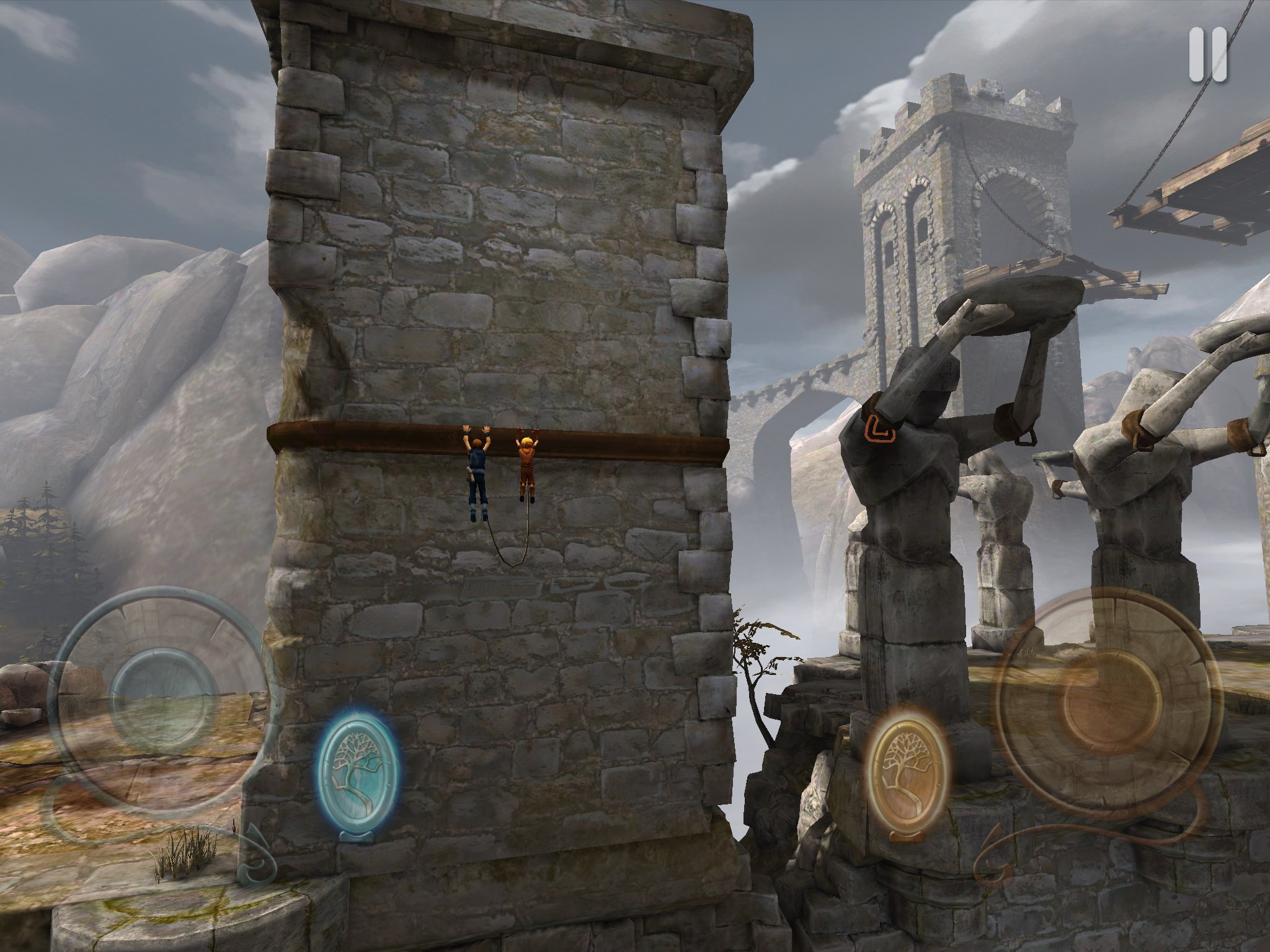 I found the story elements happening in the background to work far better than the main plot. Little side details that you can choose to see or not, like the brothers’ differing reactions to various pieces of the environment. Characters you can choose to interact with or simply pass on by. Older brother talks to an old man and gets directions, while younger brother will stand there and play rock-paper-scissors with the old fellow until you get tired of seeing it. Even set pieces like the battlefield of the giants that I talked about earlier seem steeped in history, making it feel like there’s a whole world out there that isn’t particularly concerned with a quest that means everything to your protagonists. The best parts of the game are found in these details, and they’re more than worth playing the game for. There are some very exciting set pieces, too. They’re often situations that you have the barest amount of control over, but they’re choreographed so well that it’s hard not to get at least a little excited. It’s kind of odd that Brothers is able to check off just about every box except the one it seems to have striven for the most, but it certainly softens the blow of that particular miss.

Setting aside the goof-up near the end, the game has made a pretty strong transition to mobile. The visuals and audio haven’t suffered greatly, though even the newest hardware is going to run into framerate issues here and there. The controls work fairly well, though there were times where the default press and hold layout was more irritating than convenient. Luckily, a virtual button option is a short hop into the options menu away, so I tended to flip back and forth as needed. The game is crying out for MFi support, but for whatever reason, it’s not included. Brothers also lacks support for iCloud saving, which is nearly criminal for a game that takes up this much memory. 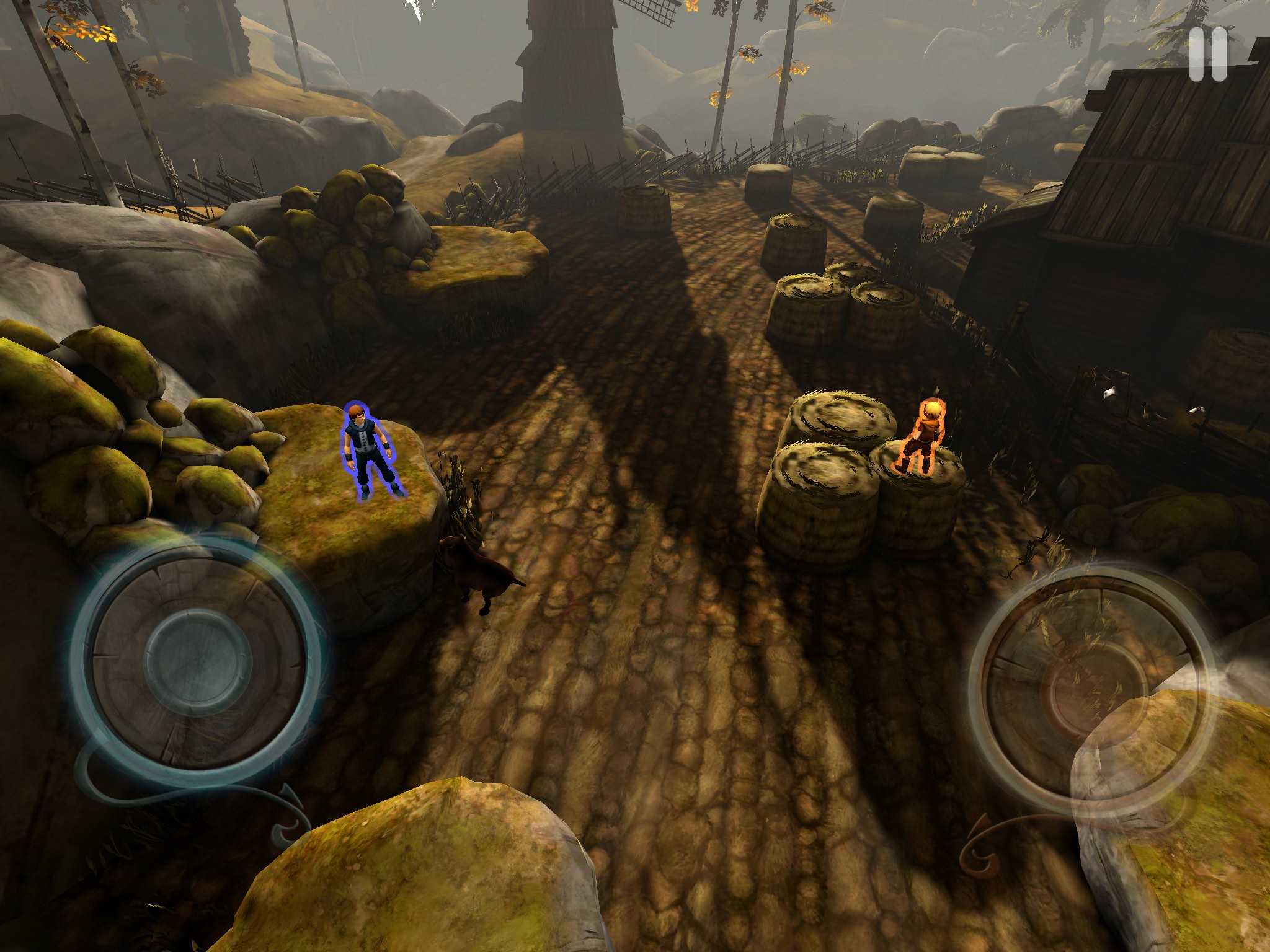 While Brothers: A Tale Of Two Sons doesn’t exactly hit the lofty mark it appears to be shooting for, it’s still quite an impressive effort, and it certainly has a wow factor to it that will have you grinning throughout your first playthrough. There’s even a good chance that it’ll put you through the emotional ringer, depending on how well its story beats resonate with you. I would have liked to have seen the game have a little more confidence in the player, with regards to both the complexity of its puzzles and the alteration made to that scene near the end, and while I ate up every slice of the scenery, the game probably could have been half as long and still made its point just as well. This is a really good game, however, and it’s one I doubt many mobile gamers would regret playing through.