Depending on your persuasion, the first thing you’ll do when you fire up Please, Don’t Touch Anything ($4.99) and get the one bit of narrative over how you shouldn’t touch anything is one of two things. One, you’ll do nothing and the game will end when the person who told you not to touch anything returns. Two, you hit the big red button, flip the switch that pops up, and then hit the button again. This causes the city on the screen in front of you to blow up. Whoops! 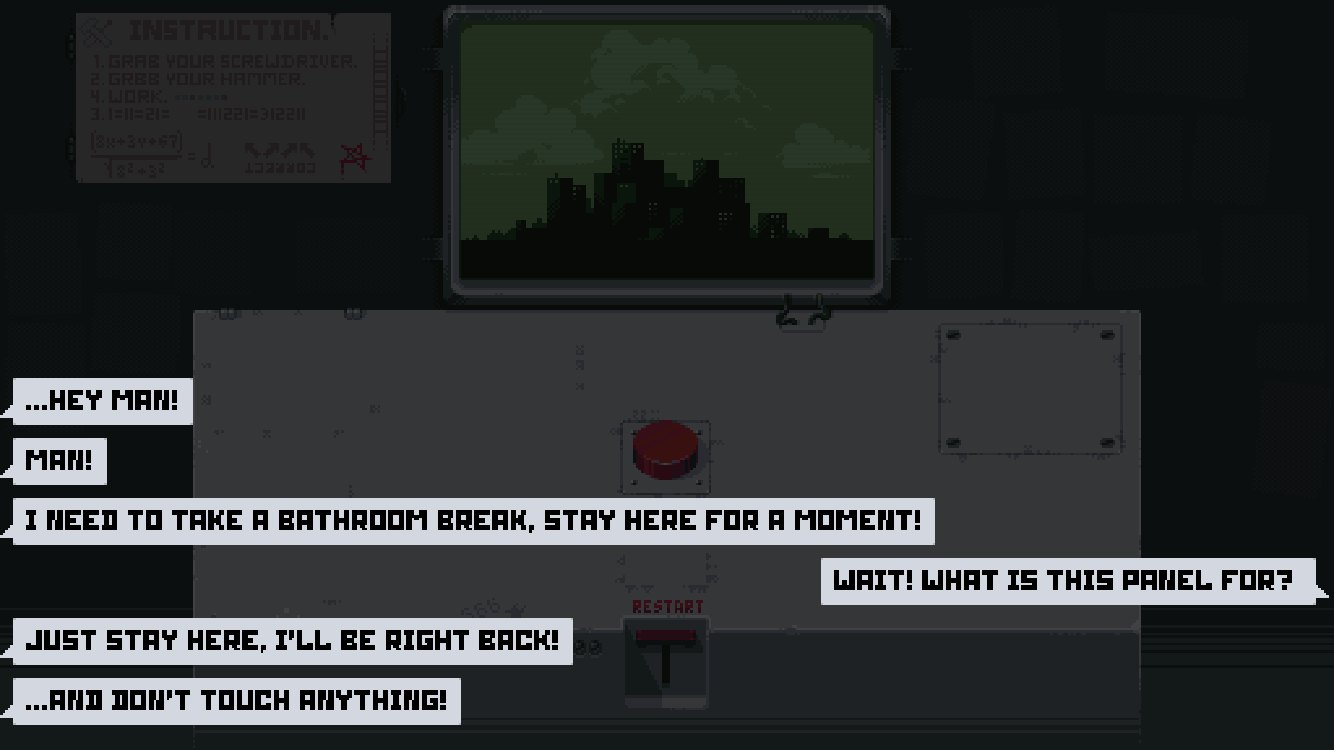 The crazy things that happen in this game are the point of the experience: you mess around and try to solve things in order to discover all 25 of the game’s endings. You have a massive array of buttons and switches to manipulate, with different events that happen based on you discovering what they do. You have a few hints available to you on the warning screen on the top left, and occasionally scattered around the machine, which you just need to piece together. Those hints will help, but a lot of the game is discovery and doing things for yourself, mashing buttons until you cause things to happen.

Half of the fun of Please, Don’t Touch Anything is seeing the various wacky things happen for yourself. The endings range from the apocalyptic to the creepy to the referential to the downright goofy. It’s rough sledding to find many of the endings, as the solutions can feel esoteric and found through experimentation, but that’s kind of the point. Sometimes the solution, when you find it, feels so obvious that you feel like a dunce for not discovering it before. 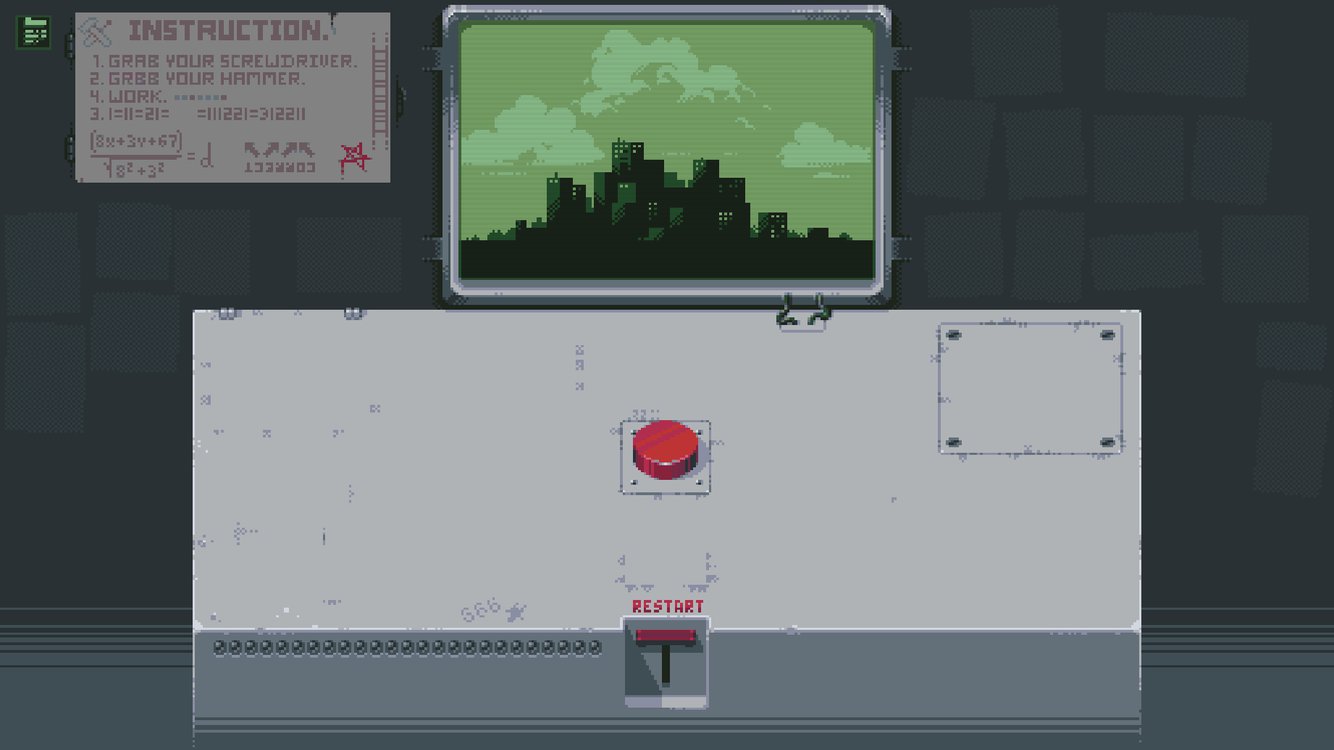 The other half of Please, Don’t Touch Anything’s fun is collecting the endings. There are 25 in total in the mobile version, up from the desktop launch’s 16 (and update which brought it to 21). This means that you have something to shoot for, some reason to keep digging beyond “I wonder what happens to the city this time?" All the endings you have unlocked are helpfully signified by lights on the machine, and posters that get put up as you unlock their corresponding endings.

With this combination of discovering esoteric things and an incentive to collect them, this makes the game good for two things: one, collaborating with people to find some of those endings, and sharing the process and experience of discovery. This is what our forums have been doing, particularly as the mobile version’s endings aren’t catalogued like the desktop version’s endings are. Which leads to the second thing: if you get stuck, there are walkthroughs available since this has existed on desktop for a bit. So, if you get stuck, you have recourse to get unstuck. Or, if the catch is better than the chase for you, then you can just find the endings for yourself. Hey, no judgment here. There were a few endings I had to consult guides for. Just getting to see the process of how to unlock the endings is fun in and of itself to me, but I enjoyed assembling Lego sets to say I assembled them, so I’m weird.

But I will say that after seeing the solutions, I often was just missing an otherwise obvious hint. Some still feel like I just mashed buttons to find them, but mashing buttons is a very valid strategy here. While it appears that as of writing, not all the endings have been found, I’m sure we’ll all be punching ourselves after it’s found when it was under our nose the whole time. 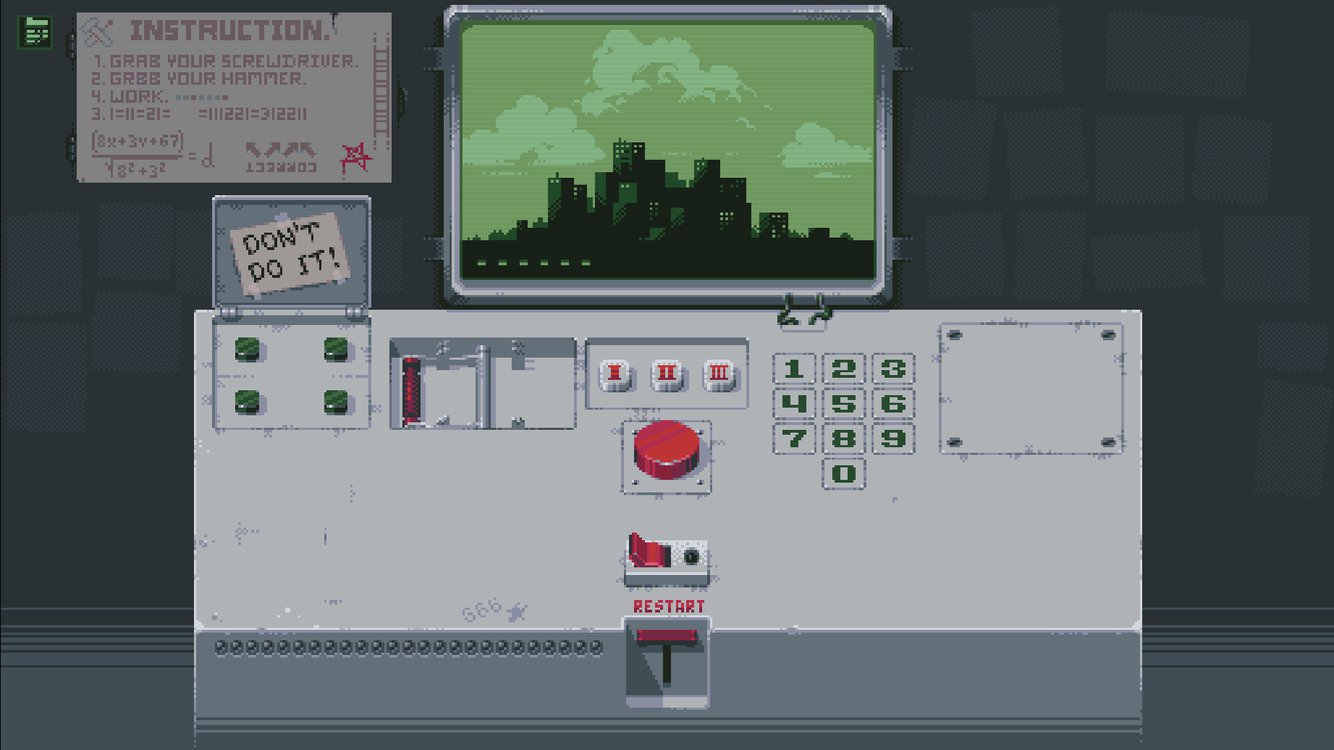 If solving mysteries sounds like fun to you, then Please, Don’t Touch Anything is for you. There’s not a greater plot to uncover, necessarily, it’s a game where the value comes from exploring its premise to ridiculous lengths and rewarding you for cracking its puzzles with another tally on your wall. If you were expecting something on par with, say, The Stanley Parable, you’ll be disappointed. It’s kind of a pointless game, I suppose, but it’s entertaining to a great degree.

There were concerns about adapting this to mobile, and the zoom function works well to alleviate concerns about playing the game. On an iPad, you’ll only have to zoom for the tiniest of buttons. On iPhone, you’ll need to use the zoom more often as buttons are a little more difficult to press on the smaller screen. The pixel art gets a bit blurry as you zoom in. Also, the visuals feel compressed to fit on the 4:3 iPad display. (Update: A BulkyPix representative has informed us that this stretch aspect on iPad will be fixed in an update pending approval) The game recommends wearing headphones, which is mostly unnecessary except for one moment when it is necessary. You’ll probably know when if you find it.

Please, Don’t Touch Anything is an entertaining experience, many certainly rewarding if you enjoy solving cryptic puzzles, which this game provides in spades! It’s perhaps limited as it’s focused toward amusement and tallying up the endings versus telling some kind of grand, cryptic story with it. But if goofy animations for solving cryptic puzzles sounds like fun to you, download this. You’ll have a good time.