Much as I’ve enjoyed recent releases from gamebook publisher Tin Man Games, I have to admit there’s been one area I’ve wanted to see some improvement in that has remained largely static across the bulk of their releases: the combat system. Given that the raison d’etre for the company has been to bring Fighting Fantasy-style gamebooks to mobile as accurately as possible, it’s hard to complain too much about the simple dice-based back-and-forth battles they’ve used in many of their releases. Still, the occasional tantalizing flash of something more, as in their brilliant conversion of Appointment With F.E.A.R. ($5.99), has had me wishing they would take greater advantage of not being shackled to the rules of physical books.

With a new engine set to debut with their long-awaited release of the original Fighting Fantasy title, Warlock of Firetop Mountain, you might think Tin Man would be content to stick to the basics with their remaining titles that use the classic Gamebook Adventures engine. Legacy Of Dorn: Herald Of Oblivion ($0.99) makes a good late showing of just what that old engine can do, however. Oh, to be sure, much of it is familiar if you’ve played the publisher’s prior works. While the style has been gussied up, you’re still flipping around pages in a virtual book, making choices here and there that send you to different sections, hopefully collecting the items you need to win, and fighting frequent battles. There’s something a little different in the water here, though, and a lot of that has to do with the new battle system the game uses. 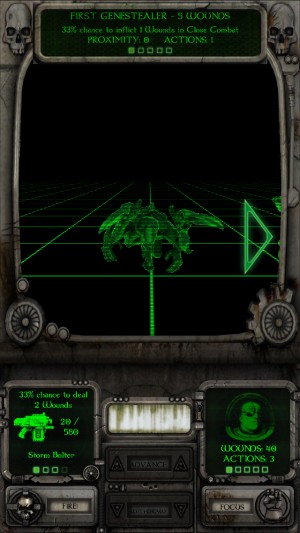 Naturally, with this being a Warhammer 40K gamebook, you’re playing as a Space Marine. Specifically, you’re a member of the Imperial Fists, heading out on a mission with your squad to purge the xenos from a floating space hulk called the Herald Of Oblivion. Very few gamebooks follow a party of characters, however, so a teleportation accident ensures that you are separated from your brothers almost immediately. You now have a secondary mission to reunite with your brothers, but it’s important to not lose sight of why you’re on the Herald to begin with. It’s a pretty good premise, allowing you to control a powerful character in an uncommonly disadvantaged scenario. You can choose the order in which you’d like to look for your colleagues, and like a perverse game of Mega Man, choosing the correct route will give you an easier time of things.

Like most things Warhammer, the text is incredibly jargon-heavy, but it’s not completely impenetrable. The book was penned by veteran gamebook author Jonathan Green, who also wrote the physical book this conversion is based on. I can’t speak to how similar they are to one another, as the physical Warhammer 40K: Path To Victory books were pretty hard to come by at the best of times, and let me tell you, rural Japan is not the best of times in this particular category. Either way, it reads like it should, and the actual story is certainly intriguing, if a little on the short side. There’s a nice touch of horror to the proceedings, that skin-crawling paranoia that only a lonely romp on a deserted spaceship can deliver in just the right mixture.

Since you’re a Space Marine, however, you can’t shirk from your duties, and the game will actually penalize you if you try to. Staying true to the ideals of the Imperial Fists will keep your Purity score high, while acting out of character will cost you points. Purity is used in several locations as a sort of cosmic luck score, and if you don’t have enough of it, things will go pretty badly for you. If you’re not sure how to roleplay a Space Marine, just err on the side of being a zealous warrior and you’ll do okay. You can probably guess that living up to that role is going to involve a lot of fighting. 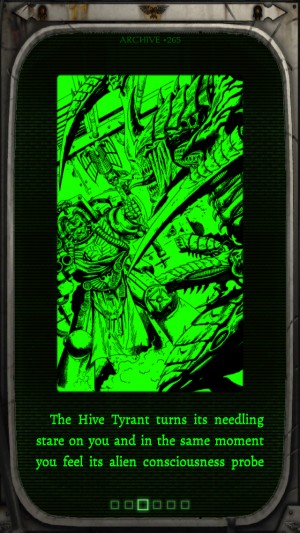 Fortunately, the battle system in Herald Of Oblivion is the best-looking and most fun to play of any of Tin Man’s releases. The basic in-world explanation for how you’re seeing battles is that you’re viewing them through a holographic display, so every enemy is cast in the same shades of green and placed on a grid. The models for the enemies are obviously taken from the miniatures used in the Warhammer 40K board games, but they’re lightly animated to make them seem more alive. In terms of the gameplay, each battle participant receives a certain number of actions per turn. You can use those actions to attack with one of your weapons, reload a gun, focus for a more powerful attack or defense, or move forwards and backwards on the grid. Melee attacks are slightly more accurate but require you to be right up in the enemy’s face, something you may have no choice in at times. Ranged attacks tend to deal more damage and let you deal damage at a distance, but you’ll consume ammunition and will need to spend an action point to reload when you empty a clip.

On top of that, certain battles and enemies will have special conditions. You might need to finish a battle in or survive for a set number of turns, or be faced with an enemy who can poison you at melee range. In my opinion, battles are usually the weakest parts of traditional gamebooks, quickly devolving into repetition, but Herald Of Oblivion not only offers up more strategic options in general, it also varies the parameters of the fights to keep things fresh. You’ll also frequently face off against a pretty big group of foes, which can be pretty exciting. Landing a couple of critical hits to clear out a bit of the herd before they can counter-attack always feels good. I found myself looking forward to each battle in this gamebook, which is a rare thing when it comes to myself and gamebooks.

The branching structure of the game makes use of a lot of random choices with no indication of which path might be the right one, something that usually gets my goat in gamebooks, but it didn’t feel as bad here. There are only a few instances where the penalty for a lack of clairvoyance is death, and only one of them is especially bad. You might have to take a do-over if you trip that one, but that’s not awful by the standards of the genre. No, the random choices here just lead you to different situations, and you have a lot of freedom to go back and head the other way up to a certain point. Certain paths might lead to items that will make your life easier, but Herald Of Oblivion mostly side-steps the Golden Path problem of forcing the player to do exactly the right steps in the right order to win. 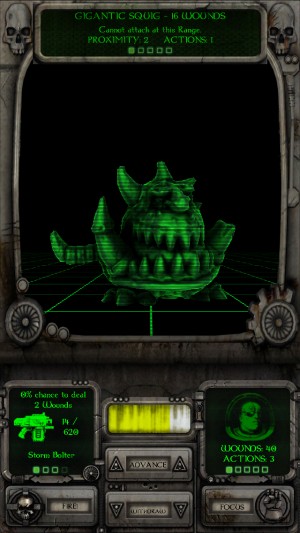 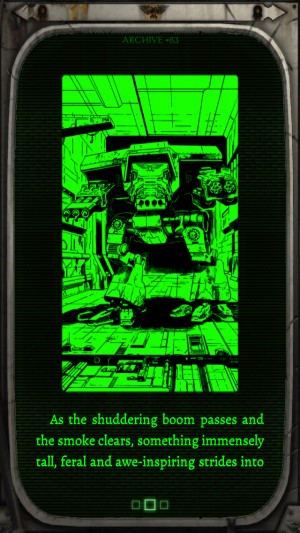 You get the usual Tin Man bells and whistles here. Multiple difficulty settings that allow you to make things more difficult or a walk in the park as you see fit, font and text size options, an assortment of achievements, and unlockable pieces of art. I found Herald‘s difficulty to be somewhat less punishing than the average gamebook, but the highest setting is still quite a challenge. I do have a couple of gripes about the game, though. I’ve mentioned this already, but it feels pretty short. A lot happens, but it feels like it happens too quickly. That’s good for the pacing, I suppose, but it sometimes felt like I was skipping around from situation to situation. The other issue is that while I appreciate that Tin Man is going for a certain visual style here, the use of bright green text on a black background was a bit hard on my eyes. It felt like I was back in the late 1990’s, playing my Virtual Boy and reading Geocities webpages. I would have liked to have had an option to at least invert the colors, if nothing else.

Legacy Of Dorn: Herald Of Oblivion is an enjoyable, creepy adventure with a great setting and a fun combat system. It’s steeped in its license, so those unfamiliar with the Warhammer 40K universe might find it a little intimidating, and its commitment to its aesthetic approach has a bad side-effect or two, but on the whole, it’s an easy recommendation to Warhammer 40K fans, those who like sci-fi horror stories, and players who enjoy battle-heavy gamebooks. General RPG fans will likely appreciate the battle system more than the usual gamebook fare, too. Even though I’m not a big fan of the wider Warhammer 40K universe, I’ll definitely be looking forward to further installments in this series.