Even though I should know better by now, I still frequently make judgements from the names of games. An evocative title will catch my attention and get me curious enough to at least give a game a try, while a generic one might leave a game lost in the shuffle. It’s especially a problem on a platform with as many on-going releases as iOS. Super Happy Fun Block (Free) has a pretty plain name. It’s so plain that even after it was recommended to me by someone whose opinion I really respect, I downloaded the game and left it unplayed for a while. When I finally did get around to it, I found a pretty amazing puzzle-platformer with a nice sense of style that few people seem to have noticed. Well, hopefully the old adage about late being better than never has some truth to it, because while the name might be bland, the game is fantastic and more people ought to be playing it.

You play as a little ball-shaped character with arms and legs named Ball, who lives in a world that consists of only black and white until the day the blocks arrive. Malicious, and in some cases deadly, these invading blocks are both your obstacles and your tools. In each stage of the game, you’ll be searching for a certain number of stars and the exit. Some of the stars will be on the main path, but most of them will require you to do some thinking and the occasional quick bit of action-platforming to reach. The set-up works a bit like Super Mario 64 in that you need a certain number of stars to open up the next world. There are four worlds in total, with some extra secret levels to be found by careful explorers. 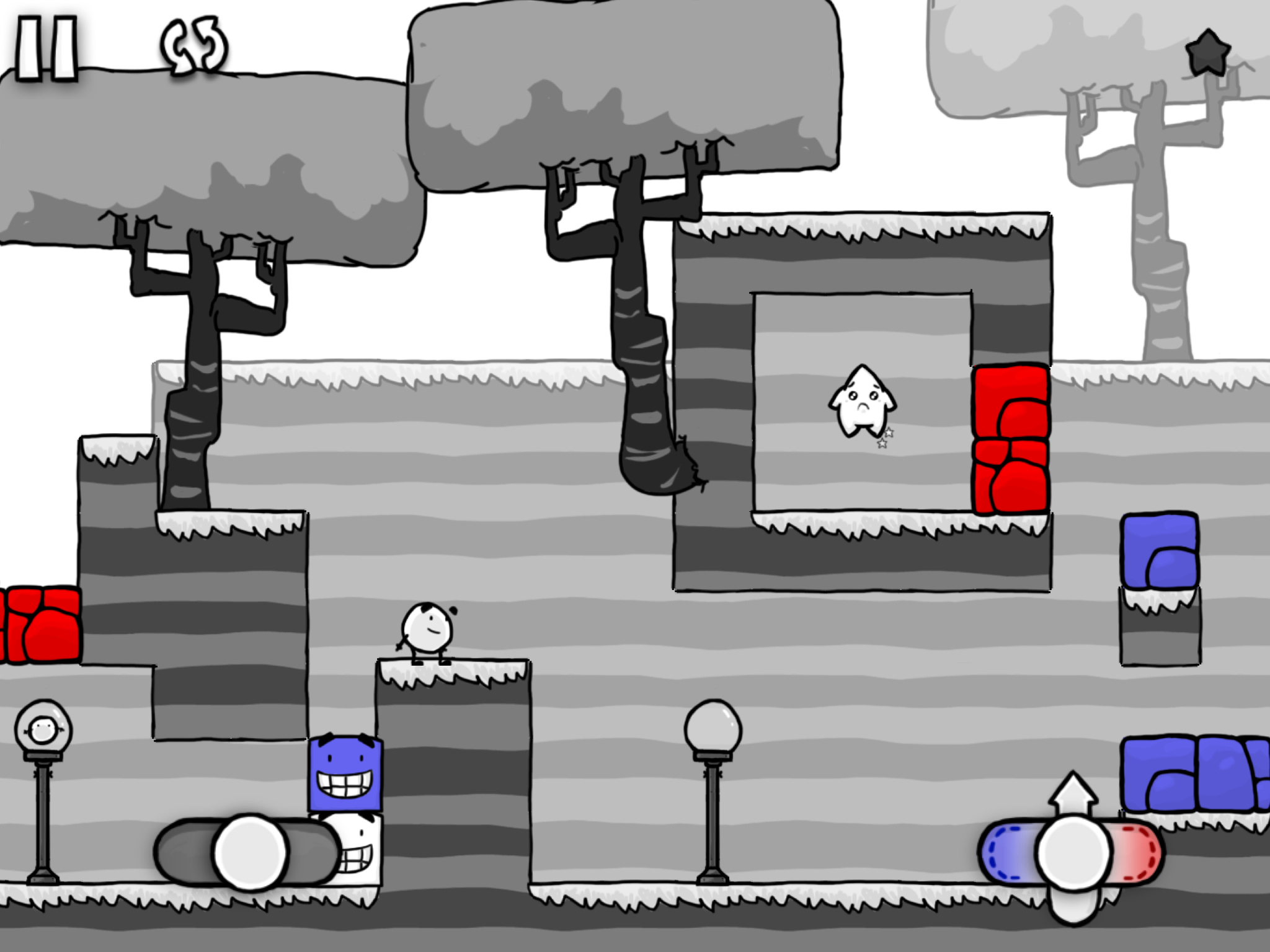 The main character can run, jump, and manipulate blocks by pushing or pulling them. Ball’s other trick is being able to phase red blocks, blue blocks, or both into and out of the physical world at will. If you’ve ever played Wayforward’s Mighty Switch Force, you’ll recognize the mechanic quickly, though Super Happy Fun Block applies it in some interesting ways that game never did. Notably, the second set of stages introduces the idea of painting yourself in different colors. If you’re the same color as another object, you’ll pass through it and be unable to interact with it directly. If you’re painted red or blue, using the phase ability will wink Ball out of the physical plane. You can’t move in this state, but it’s still useful for solving puzzles. The game gets a lot of mileage out of its gimmick largely because it provides a steady drip of new applications of it. Naturally, the game uses these twists to build more difficult and complex puzzles, but it’s equally willing to use them to section off possibilities for the player, almost invisibly guiding you towards solutions.

Lives are unlimited and the stages offer frequent checkpoints, so you’re free to experiment without much in the way of consequences. The only caveat is that if you want to get a gold clear on the stage, you have to pull it off without dying. Generally, it’s not too hard to do once you’ve figured out the solutions to the puzzles on each map, but later levels do have some tricky bits that will require you to demonstrate some good timing. The puzzles in Super Happy Fun Block have a weird feeling to them at times, though. You occasionally have to do some very non-conventional things to create a path forward, and while that might just have been me finding solutions the designer didn’t anticipate, in at least a few cases there wasn’t any other way to proceed. 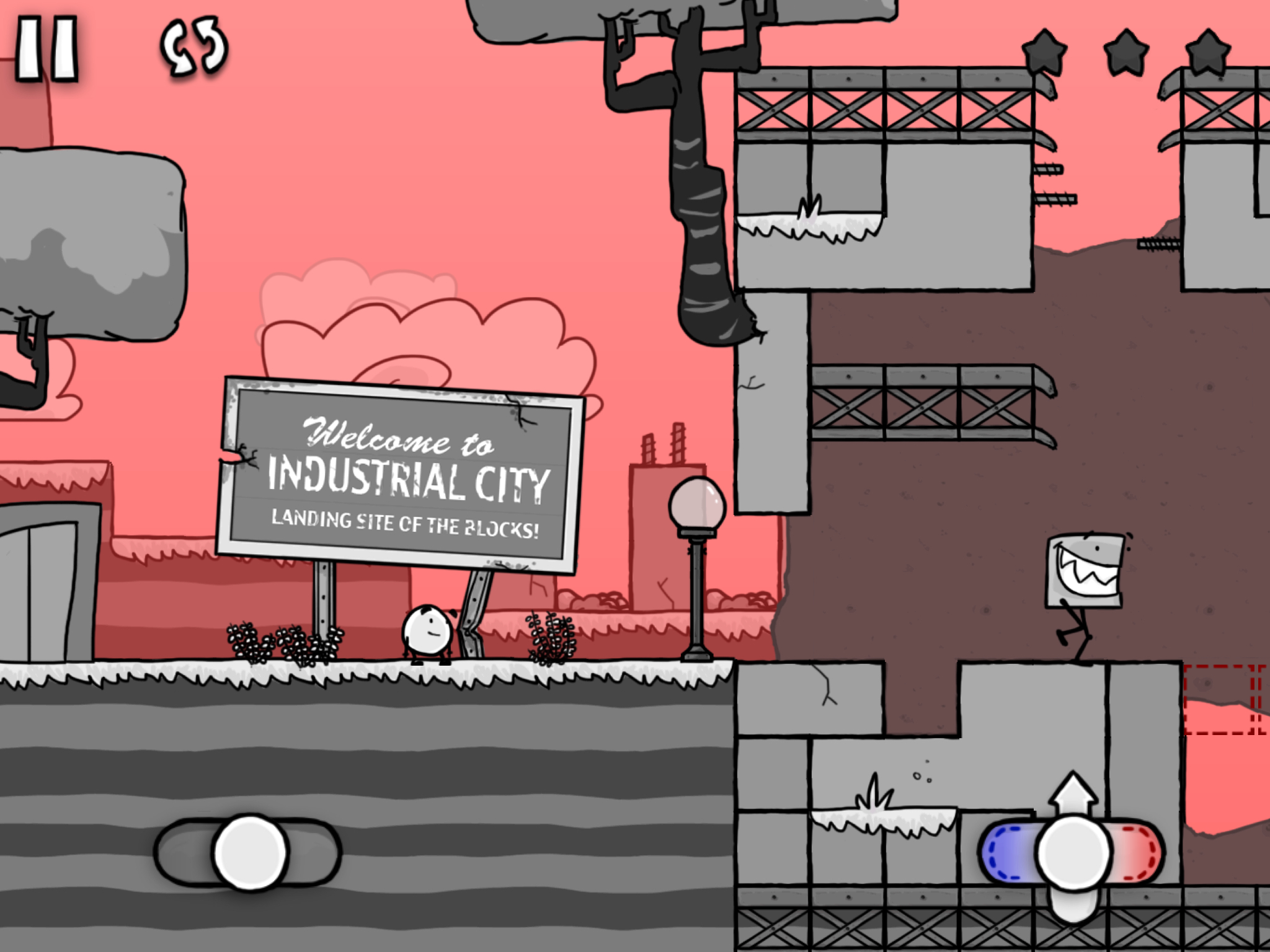 I’m of two minds about this kind of puzzle design. On the one hand, it gives you that feeling that you have found your own personal answer to a puzzle, but on the other, there’s a certain question as to whether you found the actual solution or just fudged your way through. One thing that is assuredly positive about the somewhat open puzzle designs is that they help the game feel like something different from the typical Sokoban/Boxxle puzzler. I’m also pretty impressed with the gentle difficulty curve in the game. It layers complexity on carefully, making sure the player is fully comfortable with one concept before it tosses on another. It gets pretty tough about halfway through, but never unfairly so. The secrets are pretty well-hidden, though, so you’ll have to really think outside of the box to find them all.

The mechanics are well-thought out and the level designs are, on the whole, quite good, but Super Happy Fun Block additionally benefits from its presentation style. Though objects are drawn in a rather simple fashion and color is in short supply by design, the visuals still manage to charm. Everything is animated nicely, with touches here and there that make the world come alive. It’s all a bit abstract but it’s easy to spot at a glance where and what everything is. The few humans that appear in the game are stylized and cartoony, fitting the theme well. Super Happy Fun Block also loves its sight gags, with lots of little animations dedicated to goofy or just plain bizarre happenings. The audio side of things is less memorable, but certainly does its job without detracting from the experience. While there isn’t a ton of text in the game, what’s here is well-written and pretty funny all-around. Each star you find has something to say, and while not every attempted joke lands, even the less funny ones help shape the feel-good tone of the game. 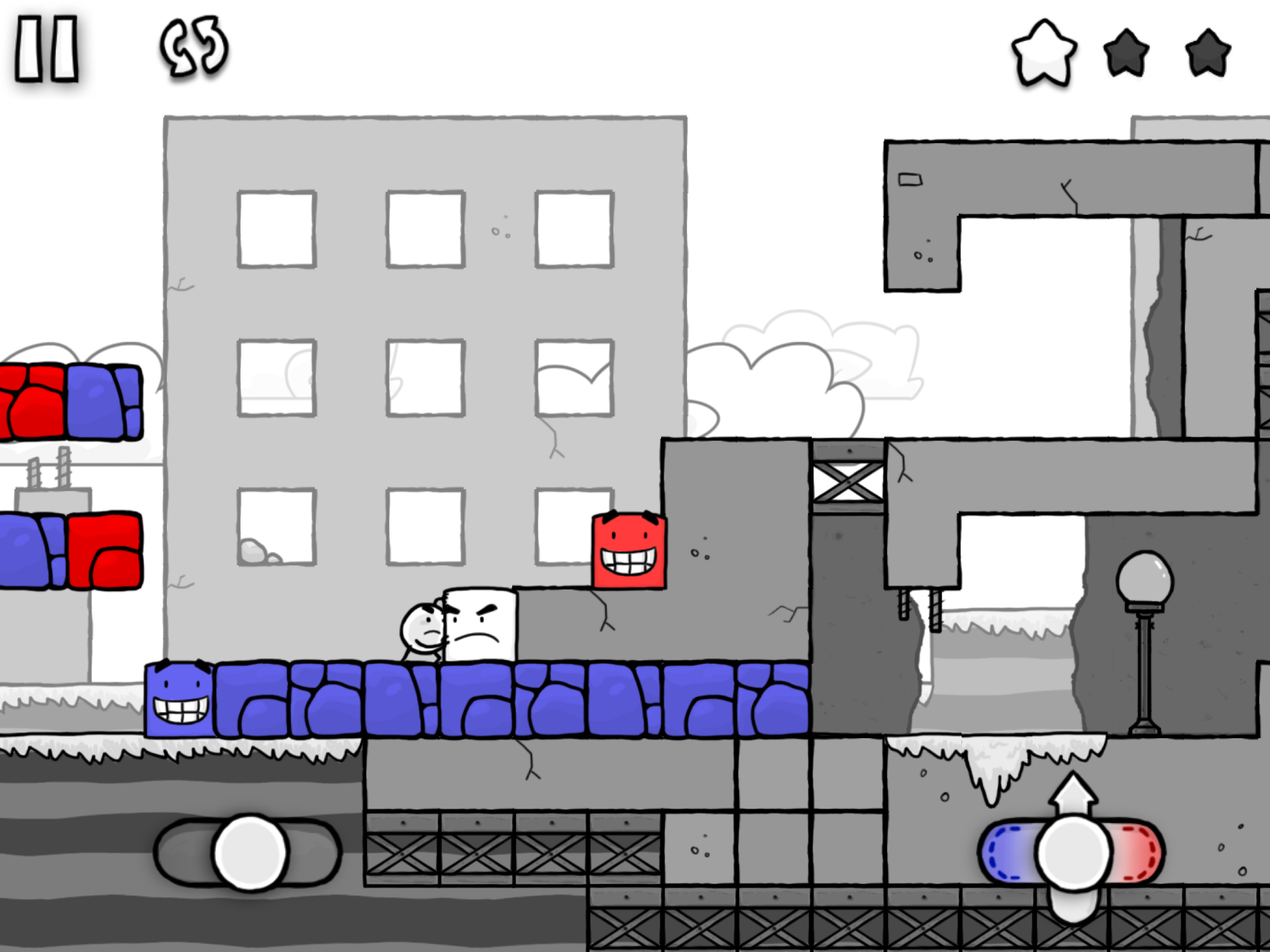 Super Happy Fun Block is a bit on the shorter side, but it has the courtesy to end while its gameplay is still fun and its ideas are still fresh, and I appreciate it for that. Apart from a few instances where the relatively open puzzle designs feel a little too open, this is a really terrific, surprisingly polished game. The controls work well, with MFi support for those with a controller and well-implemented virtual buttons for those without, and the movement of your character feels good using either option. The way the stage designs slowly build up the challenge and the interesting ways the game spins old tricks into something fresh make it a winner on the design front, too. Super Happy Fun Block‘s name might have caused it to slip by your notice, but the game behind it is a real winner and shouldn’t be passed on.