Shortly before iOS took over my life, one of my favorite games was Boom Blox on the Wii. It was the brainchild of a little known game designer by the name of Steven Spielberg (who also dabbles in film, I’m told), and it was absurdly fun. There’s something about huge explosions and large structures toppling over that delights the eight year old boy in me, and Boom Blox (and especially it’s sequel, Bash Party) took over my free time for countless weeks. Ever since those days I’ve been yearning for something like that on mobile, and while there have been a couple physics-based games that provide a similar feeling (my favorite being Turbo Dismount (Free)), none have quite captured the floaty, block-on-block destruction I’ve craved since 2009. [Dramatic pause.] …That is, until now. 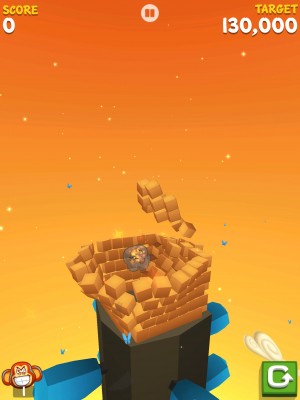 Monkeyrama (Free) by Tuomas Erikoinen feels really, really close to Boom Blox. The physics are absolutely dead-on, and because of that it’s an utter joy to play. Each level presents you with a structure (or two or three) made of different types of blocks (wood, stone, ice, etc.) and your job is simply to destroy it. To do that, you need to throw monkeys at it. Yes, monkeys. (Well, their heads, anyway.) Like the blocks, there are different flavors of monkeys, including explosive monkeys, heavy monkeys, and–my favorite–sticky monkeys. To pass a level you just need to hit a certain score threshold, which is achieved by having as many blocks as possible fall off the foundation. It’s incredibly easy to grasp once you dive in, and part of what makes it work so well is how intuitive everything is.

Controlling the game is as simple as swiping and tapping. Swiping to swivel the level around or up and down to get a better view, and tapping to fire off a monkey. It’s super simple, and I’m glad the developer didn’t try to ape (heh) the Boom Blox series too closely by using some kind of crazy accelerometer controls for throwing, since I have vivid memories of my right arm being incredibly sore the day after playing those games. (Also, I rather like my iPhone not being stuck halfway into the wall.)

Just mimicking the physics of a beloved Wii game isn’t enough to make a great mobile experience, though. Thankfully, Monkeyrama absolutely nails the level design, with structures that range from pure explosive fun to surprisingly devious puzzles. For example, (spoilers?) there’s a pirate ship later on that has three explosive blocks on stilts and you only have two throws to knock it all down. I spent literally 20 minutes trying in vain to destroy the damn thing, when I accidentally scrolled the screen up and noticed the secret: larger explosives high above that could easily be knocked onto the other blocks to obliterate everything. I literally laughed out loud when I realized how simple it was. 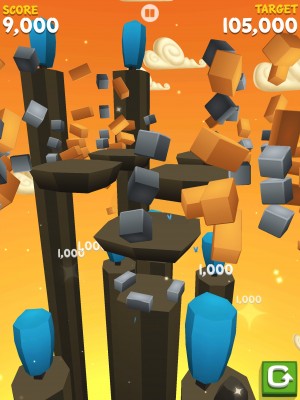 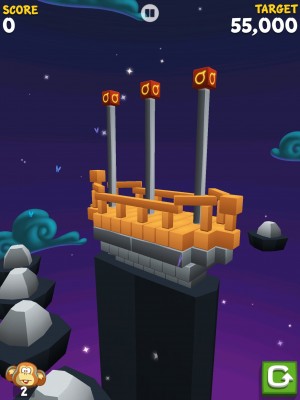 Everything in the game works so well, actually, that all of my complaints are things that aren’t there, rather than problems with the things that are. For example, despite the fact that there are almost 90 different levels to complete, I finished all of them almost in one sitting. I suppose it’s a good thing to leave your audience wanting more, but Monkeyrama accomplished that a little too well. (Of course, it’s only 99 cents, and there are more levels supposedly on the way.) Another thing that pains me is that there’s no level editor included, which was by far the best part of the Boom Blox series. I mean, I literally made a giant piano and a working Minesweeper board in Bash Party. And then blew them up over and over. More realistically, it’d be great if there were replay options in Monkeyrama, like the ability to rewind the action and play it back at different speeds (like Turbo Dismount). Finally, it really sucks that there are no leaderboards. What the heck, Tuomas?

On paper, Monkeyrama doesn’t seem particularly exciting. It’s kind of hard to give a high rating to something that’s basically a super stripped down version of a previous game about throwing balls at blocks. But you know what? It’s only a buck, and it provides an experience that’s absolutely perfect for large interactive screens like the iPad. Plus, it got more smiles-per-minute out of me than almost any other game I’ve played this year. I’m not sure what that says about me, and I don’t care. I whole-hearted love this game. (Mic drop.)