The biggest strength of interactive fiction is in how it lets the player shape the story of the game. While other genres are improving in that regard, they’re limited largely due to the costs associated with visual and audio assets. It simply doesn’t make sense to spend millions of dollars on content that only a small percentage of players will experience. Text isn’t quite free, but it’s certainly a lot cheaper. That said, with all of that freedom, there are still an awful lot of games in the genre that have you playing a similar character in the broad sense. Violence may not be a useful answer in our modern society, but it will sure get you far in plenty of games. Ratings War ($2.99) does something different, and in doing so, feels a lot more real in spite of its far-flung futuristic setting. You play as a journalist, and although you get to decide what kind of journalist you are, there’s very little room for action-heroics in this story.

You start off as a low-level blogger trying to bargain your way into a story, but it’s not long before fate gives you a chance at something bigger. Once you’ve got your shot, you’ll have to decide how you want to play it. Are you a hard-nosed reporter that seeks the truth above all else? A flashy personality who isn’t afraid to massage the truth for higher ratings? Are you a lone wolf who will sell out anyone to get the story, or are you a team player who prizes harmony over personal glory? Those are the choices you’ll have to make as you play through the game. It’s a bit on the short side, with only three main stories to investigate, and I know I was certainly left wanting more at the end. That’s sometimes a good thing, but I sure hope this game gets a follow-up of some sort down the road, because I wasn’t even the slightest bit tired of its style by the time the game was finished. 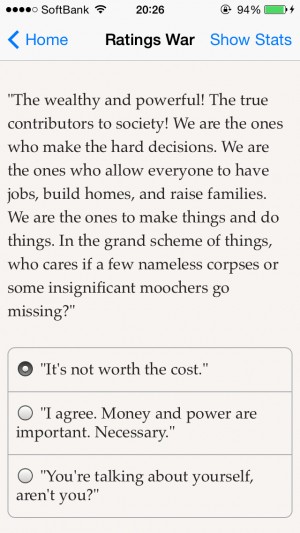 All of the usual elements found in games from Choice Of Games can be found here, albeit in more limited quantities. There are only two possible romantic partners, and you might be limited to just one depending on which gender and sexual orientation you choose. Personally, I didn’t find either possible relationship to be very well-written in Ratings War, though. It felt tacked-on, which is out of the ordinary for this publisher’s works. Like Choice’s other games, progress is less about having the right items or solving puzzles so much as it is playing the character you develop in a way consistent with their personality. As you make decisions, your character’s personality and skills will be shaped, and those stats determine how well you’ll be able to pull off certain choices later on.

I rather enjoyed the futuristic setting of the game, which is a fairly believable, only slightly-pessimistic extension of our reality. It doesn’t dwell much on the background details, but I found little things like its speculation on where privacy laws might go in the future to be interesting. At its heart it’s a story about uncovering corruption, a well-worn concept if there ever was one, but author Eddy Webb is careful enough to give the villains of the piece reasonable motivations for their actions. It’s easy to pursue your principles until it involves sacrificing something dear to you, but who’s to say what anyone would do in that kind of situation until they’re there? As a reporter, what you choose to report and how will have consequences for people. It’s a concept Ratings War plays around with frequently.

I think that’s why I enjoyed Ratings War as much as I did. Instead of being another gamebook about conquering enemies or traveling through dangerous, fantastical worlds, it opts to focus on more relatable topics like obsession, the value of truth, and whether people who do bad things for good reasons deserve second chances. Those thoughts are woven into a enjoyable, fresh, fast-paced story about investigative journalism, making for a pretty strong package all-around. Really, the most serious drawback is that it’s over all too soon. If I had my druthers, I’d prefer the romance aspects to either be fleshed out a little more or cut altogether, and the ending lacks in punch, but those issues don’t detract greatly from the game. 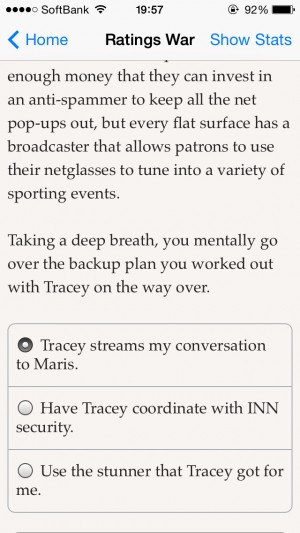 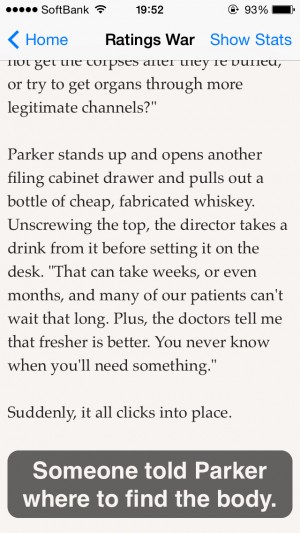 The standard disclaimer about Choice Of Games adventures applies here. This is a purely text-based interactive story with only one picture in the whole game, a title illustration that evokes images of Blade Runner. Other than that, you’ve got words on plain backgrounds, and a status screen with a few colored meters on it showing your parameters. That simplicity allows it to be accessible to a wide variety of gamers, but if you’re looking for something flashy to show off that new A9 chip, this probably isn’t going to do the job.

Ratings War is a compelling piece of interactive fiction, with an unusual premise and a fun plot that’s ripe for the different available personality types to riff off of. While it’s a little on the short side, that element of the game keeps the pace lively and, if nothing else, helps avoid the problem of the concept spreading itself too thinly. The romance options are a little half-baked and the ending is a bit anti-climactic, but that’s not enough to keep me from giving this one a pretty solid recommendation, especially if you’re looking for something off the beaten path of the genre.