Dust: An Elysian Tail ($5.99) is the kind of game you can really lose yourself in. The sort of game that you want to take to a comfortable corner and just give all of your attention to until it’s finished. In spite of the many releases each week on iOS, plenty of which are good games in their own right, we don’t see efforts like this terribly often on the platform. At least half the time we do see titles like this, they’re ports from another platform, as Dust itself is. That’s a sad economic reality of the iOS ecosystem. The platform’s main appeal, judging by the charts, is in games that entertain in short bites, perfect for the busy player or someone on the go. That’s fine sometimes, but other times, you really want to get into a game, and players on mobile devices perhaps don’t get as many opportunities to do so as we’d like. Luckily, it’s easy to forget those gripes when you get stuck into something like Dust.

Initially released as an Xbox 360 exclusive in 2012, Dust: An Elysian Tail is an exploratory platformer with a heavy emphasis on action. You’ll travel through a variety of interconnected stages, battling enemies, searching out treasure, and unlocking new abilities which allow you to get at previously unreachable locations. You’ll meet a bunch of lively characters who will give you quests or carry the story forward in one way or another, and all of them are voiced. It’s a fairly plot-heavy game, and while it’s probably not going to win any prizes for its story, it’s at least more engaging than the average Castlevania tale. It doesn’t at all hurt that Dust is incredibly gorgeous. The world bristles with animation and detail, and each character in the game gets an animated close-up portrait that is used when you speak with them. You’ll visit lush forests, caves illuminated by glowing fungus, and other beautiful places, each of them a treat for the eyes. 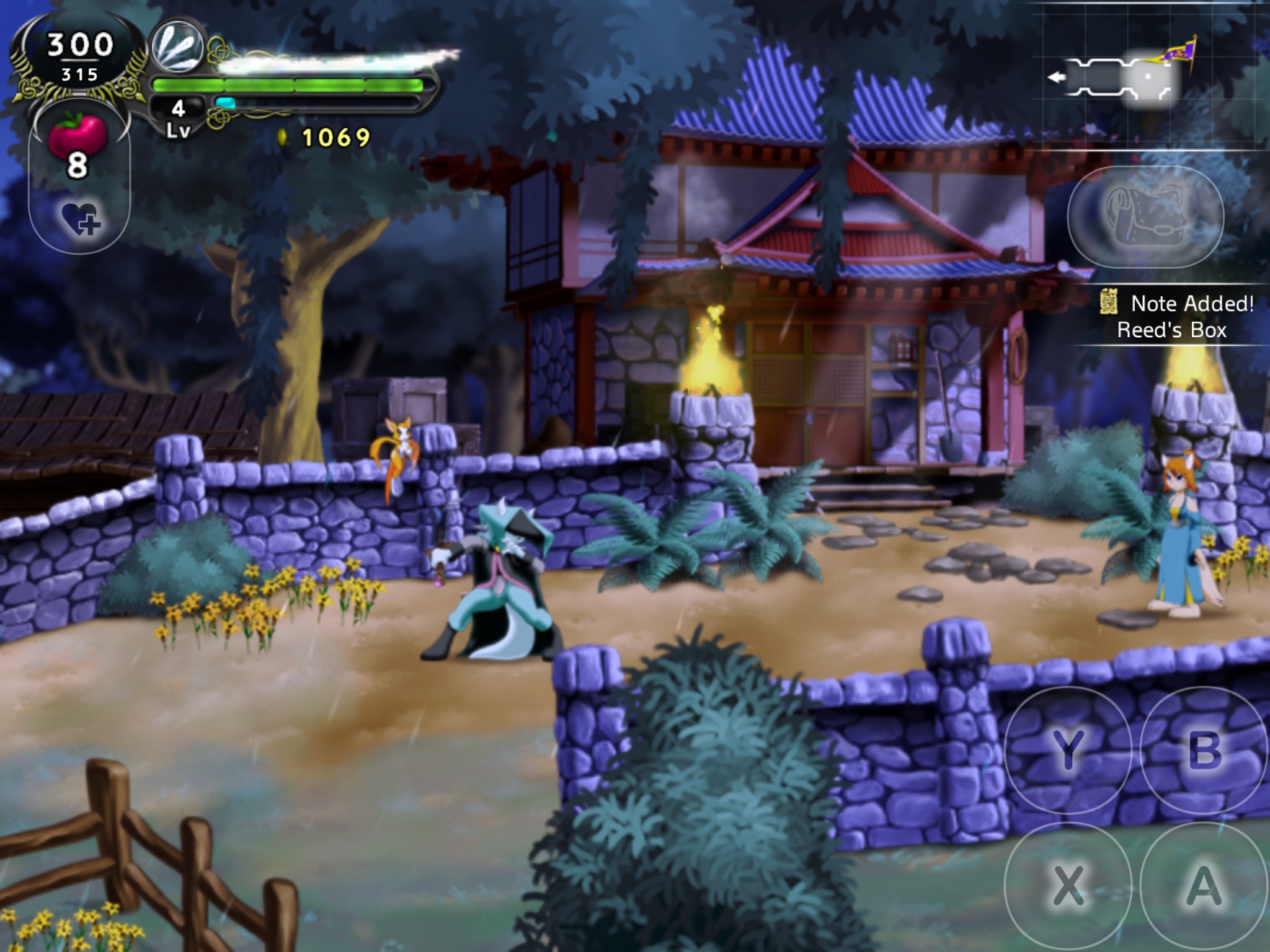 While the gameplay is primarily based around navigating the levels and engaging in melee combat, there are plenty of RPG mechanics in Dust as well. Defeating enemies and solving quests will earn you experience points, and each time you level up, you can pick one of four parameters to improve. You can also find, buy, or craft new equipment for your character to use. Crafting requires both materials and a blueprint, both of which can be dropped by defeated enemies or found in chests. Opening those chests requires keys, which can be bought at a shop or found hidden in the stages. Generally speaking, finding keys and opening chests are the main reasons to return to a level later on, and the game helpfully indicates where items remain both on the world map and in individual screens on the stage map. You still have to figure out how to reach them, but it’s comforting knowing when you’re completely done with an area.

The combat is functional and flashy, though you’re fairly limited in terms of moves. As you progress through the game, there’s a greater emphasis placed on parrying, the timing of which can be tricky to learn. Other than that, you just have to keep on hammering the main attack button, maybe throwing in the odd aerial attack or magic ability to take care of enemies that aren’t sitting in the path of your sword. It looks cool and certainly feels good, but you’ll be doing a lot of hacking and slashing throughout the course of the game, so there’s a chance you’ll reach a point where the battles start to feel a bit repetitive. It’s a pretty long game, too. Just making your way to the end will take several hours, and if you decide to get everything, you’re probably going to double that. A fair bit of that is backtracking, which is par for the course in this style of game. You can get around a lot of it by using the teleport stone item you can find or buy in the game, but if you forget to pack a couple of them, you might find yourself trekking a long way to get to particular secrets or back to the world map. 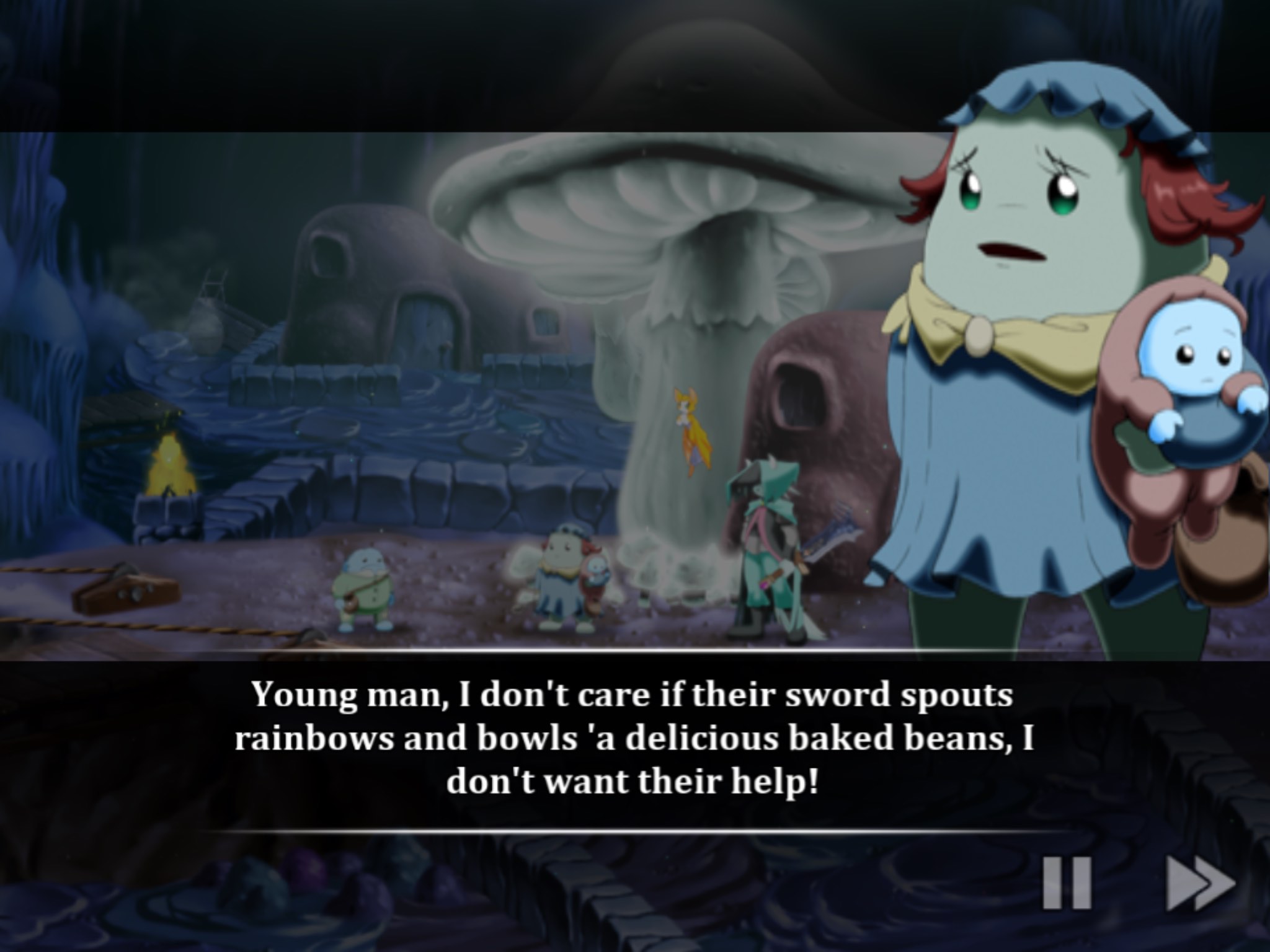 Of course, most of the flaws I’ve mentioned are endemic to the genre itself. Dust is quite content to do what it does very well, rather than experiment for the sake of correcting issues that even the greats of the genre haven’t solved. The presentation is excellent, the essential gameplay mechanics are a lot of fun, and the game world is both enjoyable to navigate and interesting to explore. It would be nice if the rewards for doing so were a bit more tangible, but I guess the old expression about journeys and destinations comes in handy here. There are some pretty great Easter Eggs involving cameo appearances from other indie game characters, and those certainly provide good incentive to dig around. Even if you don’t want to get into the treasure-hunting, the main game’s story and action provide more than enough entertainment to keep you playing until the end.

Surprisingly, the game adapts rather well to iOS devices. The graphics are considerably less sharp than the console versions, but they still look really good. The audio sometimes cuts out during heavy action, but nothing was cut from the music or the voice work, as near as I can tell. It runs pretty smoothly, but you’ll need a higher-end device to play it. Dust goes the predictable route of mapping the controls to virtual buttons, but they work really well for the most part. I only ever had issues with ducking and sliding using the default controls, and the game offers a few optional layouts that take care of that nicely. I could see having some issues if you can’t get on with virtual buttons at all, but I found it surprisingly easy to manage even in the game’s trickier moments. Speaking of which, the game offers multiple difficulty settings, and you can change it on the fly if you like. Dust also offers support for iCloud saving, like every game ideally should.

While I don’t think this version of the game is the one to beat, those who haven’t played Dust: An Elysian Tail before or simply want a portable version of the game will be well-served by this thoughtful port. If you primarily play games on your iOS device, this is an easy recommendation. It’s a substantial, enjoyable action-adventure game with superb visuals and a strong sense of style. The developer clearly took the needs of the platform into account, providing all kinds of options that make sense for mobile players, but without compromising an inch on the gameplay. This is one of the best games I’ve played on iOS this year, which I suppose is Shaun-speak for “go buy this game now, friends".