When I was a kid my dad taught me how to draw a Penrose triangle, which is regarded as one of the purest example of an impossible object. I drew it on everything, and my poor teachers at the time probably thought my family was part of some secret order or something. I just find the shape kind of fascinating since it forces your brain to reset itself depending on where you’re looking. Also, isn’t it slightly mind blowing that in order to depict an object too complicated to exist in three dimensional space, you have to dumb it down to a flat plane? Maybe “too complicated” isn’t the right way to describe it (indeed, the fact that it’s missing a dimension is precisely what allows the illusion to work), but there’s still something rather enigmatic about impossible shapes. And apparently I’m not the only one who thinks so, since there are quite a few games that use the idea as the basis for mind warping puzzles. Like Hocus ($0.99), for example. 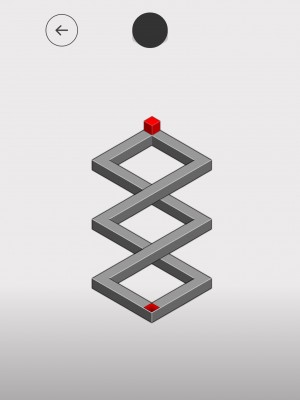 In Hocus by Yunus Ayyildiz you play as a small red cube that needs to traverse a wide variety of impossible geometries. Why? Well, to get to a small red hole. Once you do, the level is completed and you move on to the next. There are 50 overall, which may not sound like much, but it’s a good amount for the price (with the obligatory promise of more to come, of course).

Gameplay-wise, it’s basically an optical illusion “platformer” like Monument Valley ($3.99) or Echocrome. Unlike those games, however, you can’t actually manipulate the environment. The shapes never change, and all you have control over is your little cube. A simple swipe in any direction moves the cube along whatever face of the shape it’s currently touching, with a handy indicator at the top of the screen telling you which directions you can move. (The first thing that came to my mind when playing was actually App Store classic Edge ($2.99), since that game also featured a cube rolling through black and white levels apparently suspended in thin air.)

The trick is that you may think one face of the shape is pointing outward when in fact, further along, it’s actually pointing inward. That’s basically the whole point of a Penrose triangle, and it’s a pretty ingenious concept for a game like this. It’s actually sort of difficult to describe the core concept without just showing a picture, but once you see it in action it makes complete sense. Wrapping your brain around how to solve the puzzles themselves, though, is another matter entirely. 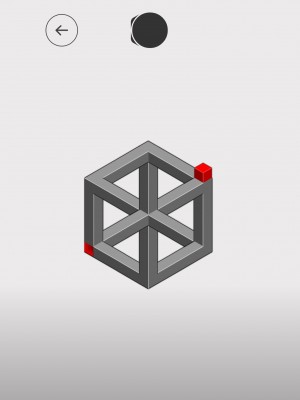 Each one is sort of like a maze, with correct paths and dead ends. Some of the earlier levels you can try to use your eyes and trace backwards from the finish hole to the starting point, but later on things get a bit too tricky for that (for me, anyway). Another strategy is to just brute force each level through trial and error, traveling down paths at random until you find yourself close to the end. Most often a combination of the two is required, and luckily there’s no timer manufacturing stress where there shouldn’t be any.

As brilliant as the concept is, though, I had a few small problems. First of all, swiping was not terribly reliable in my time with the game. It’s not clear how big/small/fast/slow your swipes should be, and as a result I often had to try several times to get the cube to go in the direction I wanted. Second, by the very nature of the puzzles there are times when your cube is completely obstructed by the twists and turns of the shape it’s rolling across. It’s not always obvious where you are, and as a result it can be extra-frustrating trying to remember where you were planning on going. (The directional indicator at the top of the screen helps, but something like a wireframe hint of where your cube is when it’s blocked by something would help even more.) Finally, there are times when your cube seems unsure if it’s behind a shape or in front (again, this is the nature of impossible objects) and a corner of it might pop in or out in a way that breaks the illusion a bit. Not a huge deal, but I just thought I’d mention it.

I began this review by suggesting that the Penrose triangle might be the purest example of an impossible object, and I think the same could be said of the game Hocus. It’s nowhere near as complex (or as beautiful or inventive) as something like Monument Valley, but if you like these sorts of perspective illusion puzzlers, this one is just about as pure as you’re likely to get. There are no leaderboards, timers, extra modes, characters, or any of that stuff. Heck, there’s hardly even any color. But there’s still something to be said for a game so focused on one single, brilliant idea, and Hocus is a fine example of that.