I can’t recall if it’s been formally announced, but this twelfth installment in Tin Man’s long-running Gamebook Adventures series is, at least for now, the last. The series has had ups and downs, but even the weaker installments helped flesh out the fascinating fantasy world of Orlandes, so I’m a little sad to see it going on hiatus. I am, however, ecstatic that it’s doing so with Asuria Awakens ($5.99), which is not only the best Gamebook Adventures yet, but also one of the finer traditional-style gamebooks I’ve ever played. The creative team behind this game seemingly held nothing back, giving us a quest that takes your character from a lowly gofer to a savior. There are a lot of gamebooks that do that, mind you, but you really have to earn it in this one, and it feels great.

The story starts off with your character being summoned in a rather unusual way by the Duke. In recounting your past adventures to him, you determine your character’s special skills and abilities. Once that’s done, he sends you on a mission to visit the city of Casporur and search for his missing emissary. Upon arriving at the city, you’ll probably notice that something strange is in the air. Tremors are shaking the city, and people are whispering about the return of the legendary god Asuria. I don’t want to spoil any of the story, but the game is essentially broken into four parts, with smaller bits in between. Each part could probably stand on its own as an individual adventure, but every time you think you might be coming to the end, something else happens. When the ending finally does come, it doesn’t let you down. One of the problems I’ve seen crop up in Tin Man’s original works a little too often is the tendency for the stories to have anticlimactic endings. Well, there’s no risk of that here, I assure you. You will feel like a hero by the time you get to the end of Asuria Awakens. 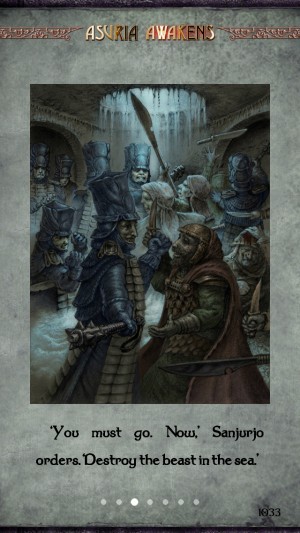 The game offers a nice pace by alternating between open areas that allow for exploration and more focused, linear sections. There are a few ways to solve most of the puzzles you’ll come across, greatly cutting back on the frustrations that arise in many gamebooks when you fall off the so-called golden path. You will want to make sure you pull a good fitness roll in the beginning, however. That stat gets a heavy workout in this adventure. There are a lot of battles, but you’re almost always given the chance to get a leg up on them in some fashion or another, depending on your character’s abilities and inventory. There are a couple of fights that border on ridiculous if you’re ill-equipped, but they’re not surprising in their difficulty if you’re paying attention to the lead-up to each. In fact, I’d say the game is in general quite fair in its challenge. There are a handful of wild fights, and there are a couple of missable items you’ll almost certainly need to win, but the game again heavily telegraphs the necessity of those items. If you choose not to make the effort to look for them before moving on, it’s kind of your own fault.

While the game’s narrative swings more towards the side of fun swashbuckling than anything else, there is a bit of a creepy horror vibe twisted into it that can make for some truly ghastly situations. There’s a little bit of everything packed in here. Some parts feel like a mystery story, some like a horror, and still others feeling like good old-fashioned fantasy action. There’s a treasure hunt, a maze, and even a series of trials at one point. The author of this installment, Stuart Lloyd, is well-known in gamebook circles for his admiration and analysis of the gamebook form, and he applies his talents handily here. His gamebook is like a Fighting Fantasy book as we remember them as opposed to how they often really are, using lots of familiar beats but implemented in a fairer and less frustrating manner.

The main weak point in the story is that few of the characters stand out strongly against the admittedly overpowering main plot. You’re given the opportunity to get to know several people, but at least half of them feel like cardboard props rather than living members of this world. I suppose that’s intentional with some of them, but there’s a certain pop I’m used to getting with the supporting cast that didn’t come through here. That said, there are a few absolutely crucial characters that drive the story, and most of them come out quite well. The antagonist who ends up being behind everything is given reasonable motivations for their actions, making them almost sympathetic in a way. It’s a nice touch in a genre that has perhaps a few too many cackling mustache-twirlers at the end of the story. 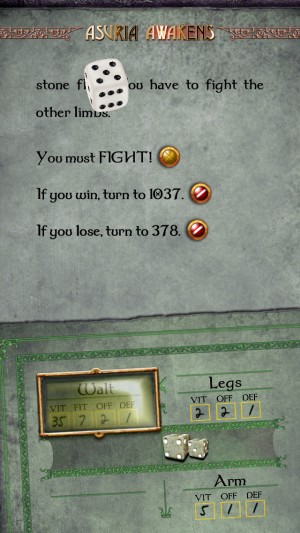 Tony Hough’s artwork also adds depth to the story. He’s got a unique style that blends colorful, cartoonish designs with an unusual amount of fine detail. I loved his work in Spellcaster: Forgotten Spell ($3.99) and Bloodbones ($5.99), and he’s done an equally wonderful job of illustrating the many moods of Asuria Awakens. His odd-looking people, deft use of colors, and attention to background details make every one of his illustrations in this book a treat. Make sure to take them in completely when you come across them. It’s just a shame they feel a bit sparse as a consequence of the length of the game. It feels like there are the usual number of illustrations in here compared to Tin Man’s other productions, but spread across a lot more text. As a result, they tend to pop up more frequently as exclamation points than atmospheric art. As usual, the game keeps track of the art you’ve unlocked and allows you to view it as you like from the main menu, and especially in this case, it’s worth chasing every piece down.

By now, most of you are probably at least a little familiar with the work of Tin Man Games. The usual options are present here, including the aforementioned art gallery, a list of achievements, three difficulty settings that allow you to cheat as much or as little as you’d like, and a good-sized chunk of background information on the world of Orlandes. At this stage, we’re probably not going to get anymore surprises out of this well-worn engine, but it does what it needs to do, and it does it well.

At the end of it all, Asuria Awakens is still a very traditional gamebook in terms of form and function. It just happens to be an exceptionally-crafted traditional gamebook, and indeed one of my very favorites so far. It’s varied in themes, substantial in content, and an awful lot of fun to play, with a truly impressive adventure that fills the belly in a way few others in the genre manage. If Asuria Awakens really must serve as the finale of the Gamebook Adventures series, I can’t imagine a higher note to go out on. A true must-have for gamebook fans.