Laser Dog Games’ Hopiko ($0.99) is a title I’ve been dying to see come to fruition since I first saw it and played it. The preview build I got to try had some real promise, but the game has come so far along that it’s become this amazing, cohesive, and stylish experience. It’s a demanding game, and one with some flaws, but Hopiko is too cool to pass up. 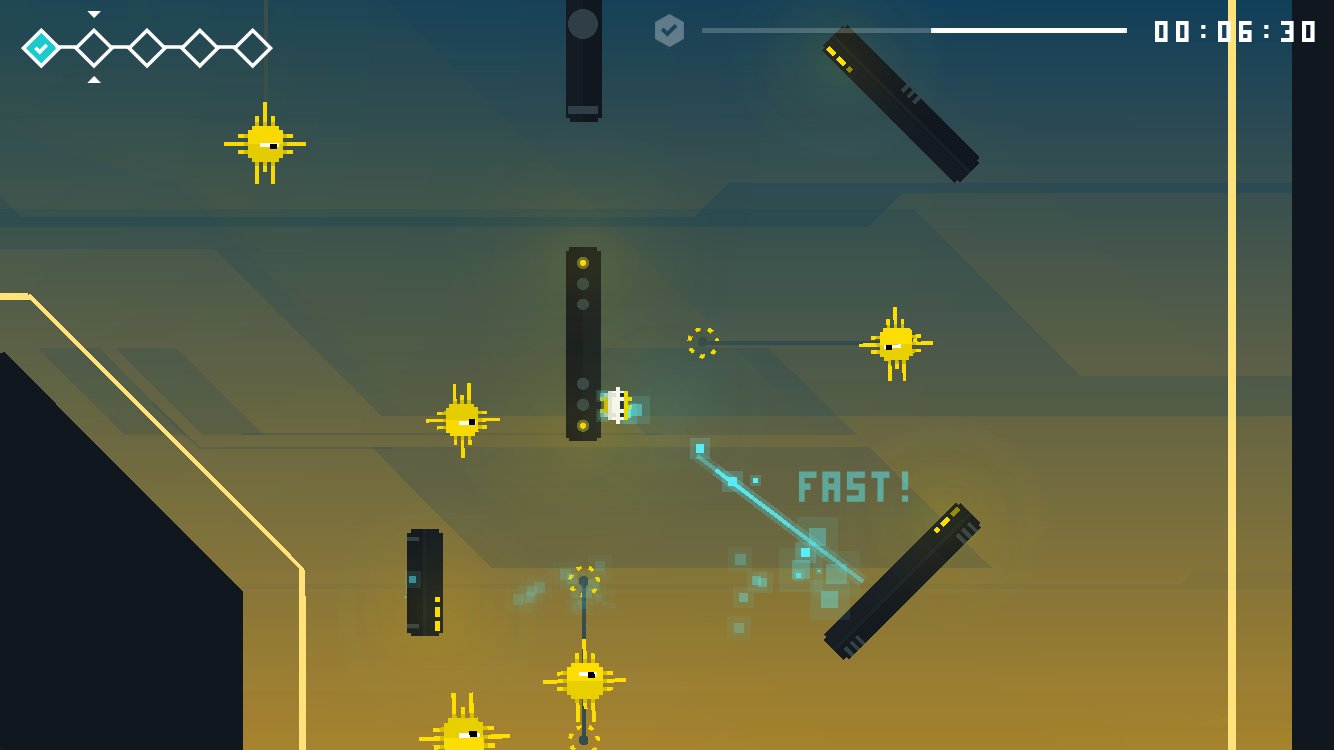 This is a speedrun platformer of sorts, except your goal is to jump from platform to platform in an environment where you stick to whatever is safe to land on. You can tap to jump directly up off of whatever you’ve landed on (up being relative to your character), or swipe to fly in a certain direction, trying to get to the end of the level. Levels are arranged in runs of 5, and you have to complete all 5 levels in a run to advance, with several stages full of 10 runs and a super-challenging bonus run to complete. All of this in the name of saving video games from creatures who have corrupted video games, and I don’t mean the writers over at Polygon.

Hopiko is all about speed. It’s a speedrun game, and each level gives you a goal time to beat it in to get the check mark for that level, sure. But also, most platforms explode if you sit on them too long, and making timely jumps lets you fly faster through the air, and it just plain feels better to go fast. But this game makes going fast feel good and not just be an optional part of the experience. You gotta go fast. Go full Sanic. While for some games, like the upcoming Mos Speedrun 2, which boasts exploration as part of the game with speedruns, it makes sense to enable slow play. But Hopiko making fast play as part of its DNA makes sense for it, too. 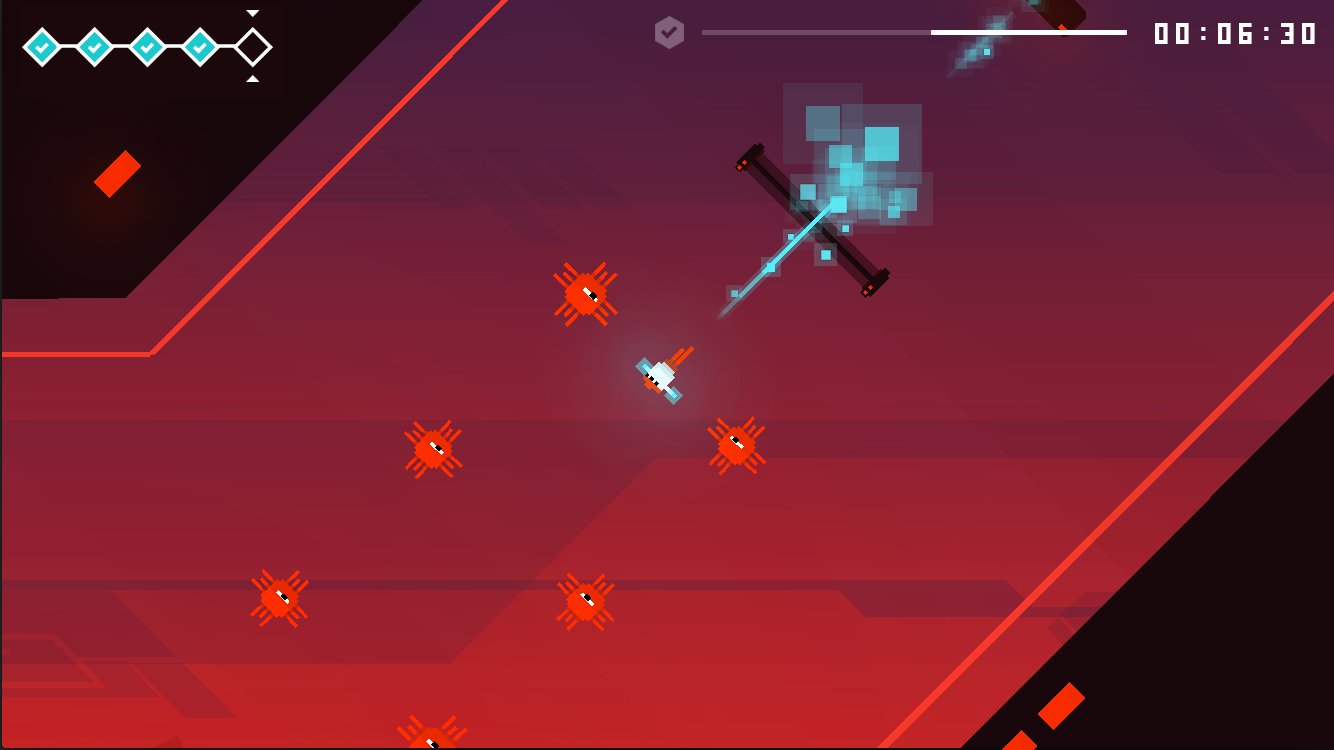 Hopiko is so full of style. The visuals are very blocky and pixel-esque, without being necessarily all about traditional pixel art. The music is great, with the whole chiptunes composed on actual Game Boys factor in play here. The game ships with lower-quality music, but you can actually download higher-quality files by going into the options and downloading a high-quality version of the files. The low-quality stuff is fine, because hey, Game Boy music, but nothing wrong with pristine quality!

The problem is that the music has nothing to do the game itself, it just kind of endlessly repeats one track until you manually change it. I’d love an option to shuffle tracks from one to another, or something that doesn’t just play the same track for 15 minutes at a time. And for a game that forces you to react quickly, a nicer variety in tracks beyond all the high-intensity tracks you get would be welcome. I actually sometimes listened to Jake Bowen’s Isometric album for some more chilled-out bleep-bloop sounds that go well with the game that also don’t trigger anxiety. 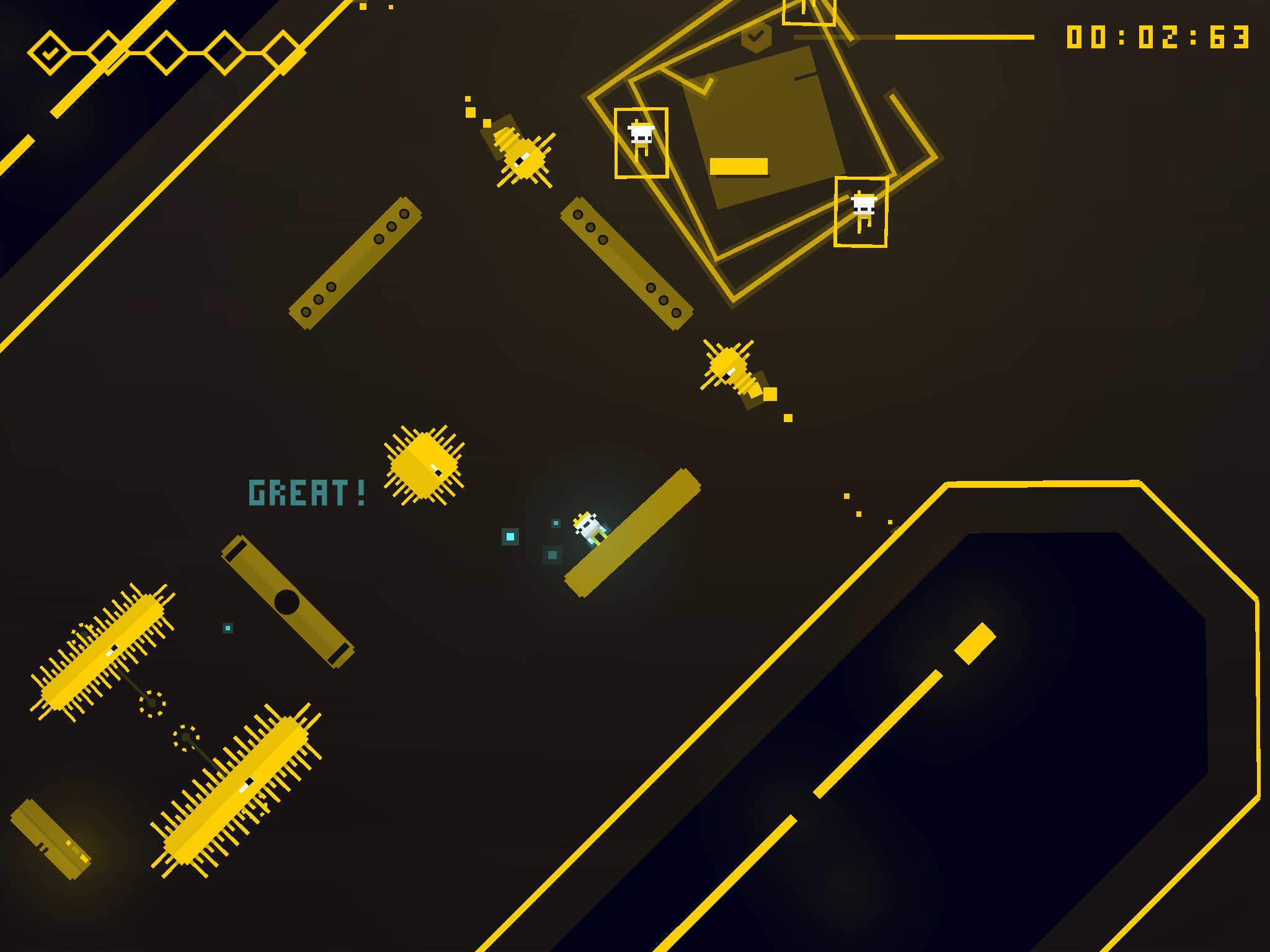 The controls work great, which is quite welcome for a game built around very, very fast reactions. And the game makes it so that you can react in lickety-split speeds, making every jump as necessary. I don’t know how you’d play this game with anything but swipes. The issue comes in where swiping accurately is a challenge. Part of this is just repetition fatigue, but there are some very narrow angles that you have to hit with the swipes to beat some levels. Sometimes you’ll screw up because in the fraction of a second you had to react, you were just slightly off. It’s just the nature of the beast here.

You’re going to have to love repetition to enjoy Hopiko, because the game is so built around its “Complete the 5 levels in a row" structure. The annoyance of this structure is minimized because a 5-level run really only takes a few seconds to beat, but that doesn’t mean that the inherent flaws of this structure aren’t still apparent. Later levels become more difficult because you have less practice to complete them, so you have to react and learn what they are in a very quick manner. This can be best exemplified by this video of what I think is a glitch, where all sorts of runs are overlaid with each other, and you can tell even just by the slowdown of the game in early levels of each run, how the deaths start to stack up.

But what’s nice about the structure is that, inherently, it’s perfect for mobile. It’s a game where you can get a few genuine attempts in while in any downtime, because you only need to spend a few seconds in order to get a good run in. And the controls work no matter if you choose to play it with your thumb (I preferred this for the speed), or your pointer finger (better for accuracy), and the game really supports either hand if you so choose. The lack of iCloud support between devices is a real shame, since if it’s just syncing up unlock data and maybe best times, it feels like there should be this feature.

The structure is a fantastic balance between making a game mobile-friendly, and not letting up on the player. If you watched a previous Mobcrush stream, you saw how many attempts it takes some of the levels even in the 2nd stage to complete. The game is built for short sessions, but that doesn’t mean that it’s easy at all. You have to learn how to play the game well, you have to figure out how the platforms work, to identify what everything is, and to act with the perfect timing. It’s a real test of skill and endurance, and good luck trying to advance in this game, because it is an intense challenge.

Hopiko isn’t perfect, but this game aims really high in trying to be this really challenging, mobile-friendly speedrun game, and it succeeds far more than it ever fails at what it sets out to do. Definitely check this out.