UPDATE: See below! Last week saw the arrival of Land Sliders (Free), the debut game from Prettygreat. It’s one of my favorite new games to come along in some time, and we even picked it as our Game of the Week. Land Sliders is a fun high-scoring game that uses a unique land-sliding mechanic, but beyond actually playing the game it also has a ton of personality. The dozens of silly characters to unlock and the randomly generated levels which have a tendency to place strange and interesting things around the game world are big parts of the appeal of Land Sliders for me. There are even logic-style puzzles to solve spread throughout the game, and one that has been stumping me and the members in our forums as of late is the mystery behind the coordinates you’ll happen upon in the game.

As you slide around in Land Sliders, occasionally you’ll come across a strange stone block with three lines of text on it and a tiny red symbol. The tiny symbol is the same one that can also found on the ground in much larger form, and it seems the coordinates and this larger version of the symbol may be related somehow. The lines of text on the block include a hint on top (or sometimes a series of question marks), followed by two coordinates. Typing these coordinates into Google Maps brings up a multitude of different things. Here’s an example of one I came across below. The hint is just question marks and the coordinates pull up a bridge in Turkey in Google Maps. 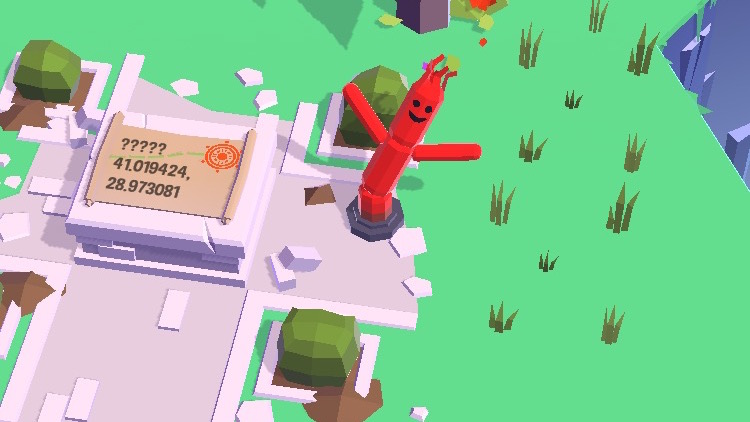 If you flip through the Land Sliders thread in our forums, you’ll see plenty of other players who have come across their own set of weird coordinates, and the places those coordinates lead to in Google Maps are all over the place. An enterprising forum member named Cactuario has created a shared Google Map listing all the points people have found already. The hope, I think, is that as more and more coordinate points are added to the map the overall picture will become more clear. As I said before the little symbol on the coordinate blocks in the game also has a large version, which when stood on brings up a keypad-type window that says “Restricted" with 9 symbol keys on it. (Here’s an example.)

It seems like the “Restricted" puzzle and the coordinates have to be linked somehow, but what’s it all about? What does it all MEAN? What other weird secrets are waiting for us in Land Sliders? I feel like I’m playing a Simogo game. If you’re interested in helping the cause, head over to the forums with any coordinates you’ve come across or any other insights you may have, and let’s crack this nut together!

UPDATE: Holy moly, a Land Sliders player who lived near one of the coordinates investigated the real-world site and discovered something amazing: A package left by George Broussard, of all people! The package included a USB stick with a single image on it. The folks who found it have posted pictures in our forums of both where the package was found and the image that was on the stick. Investigations are still ongoing as to what it all means, and plans are being made to investigate more of the coordinates. More to come from this I’m sure, so stay tuned! 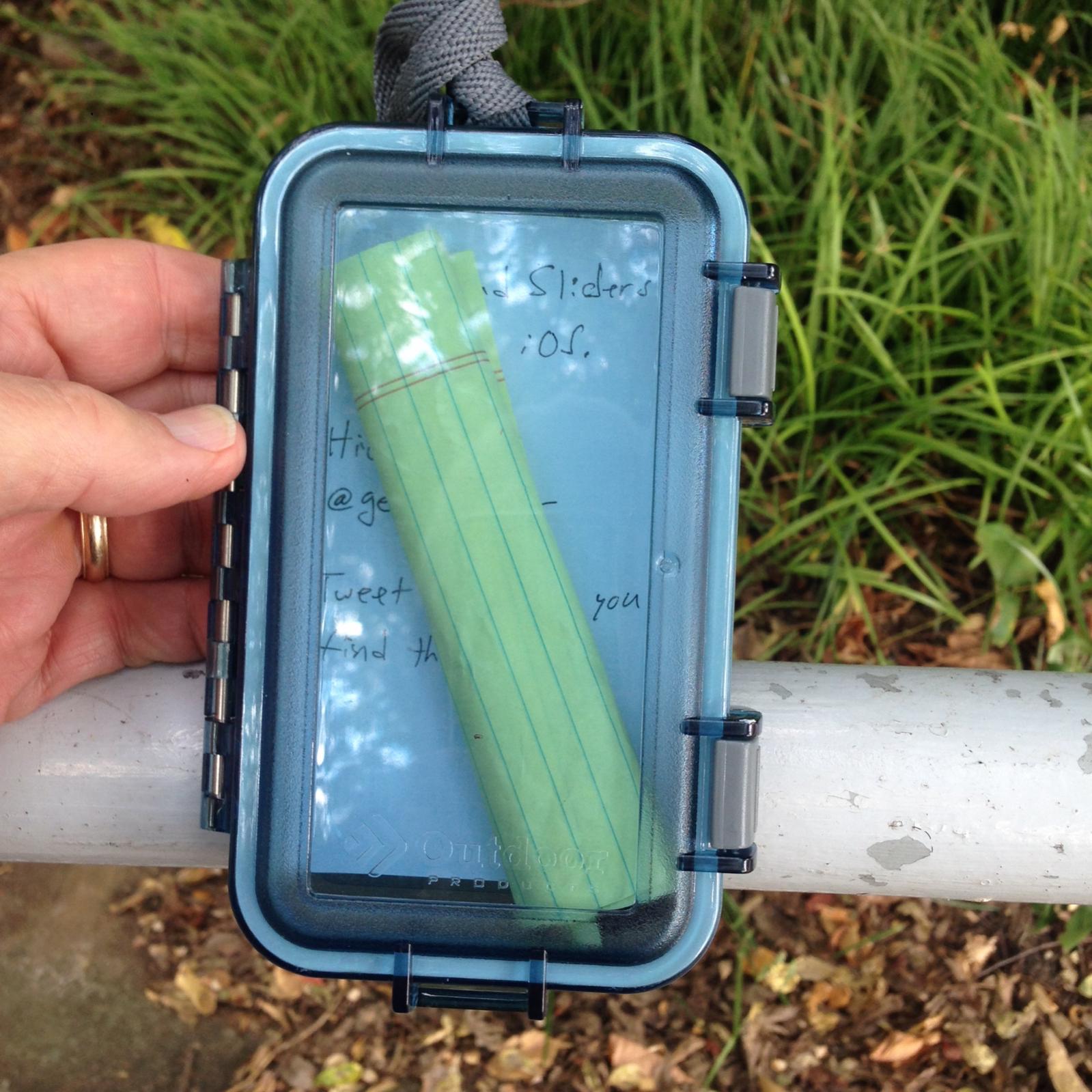 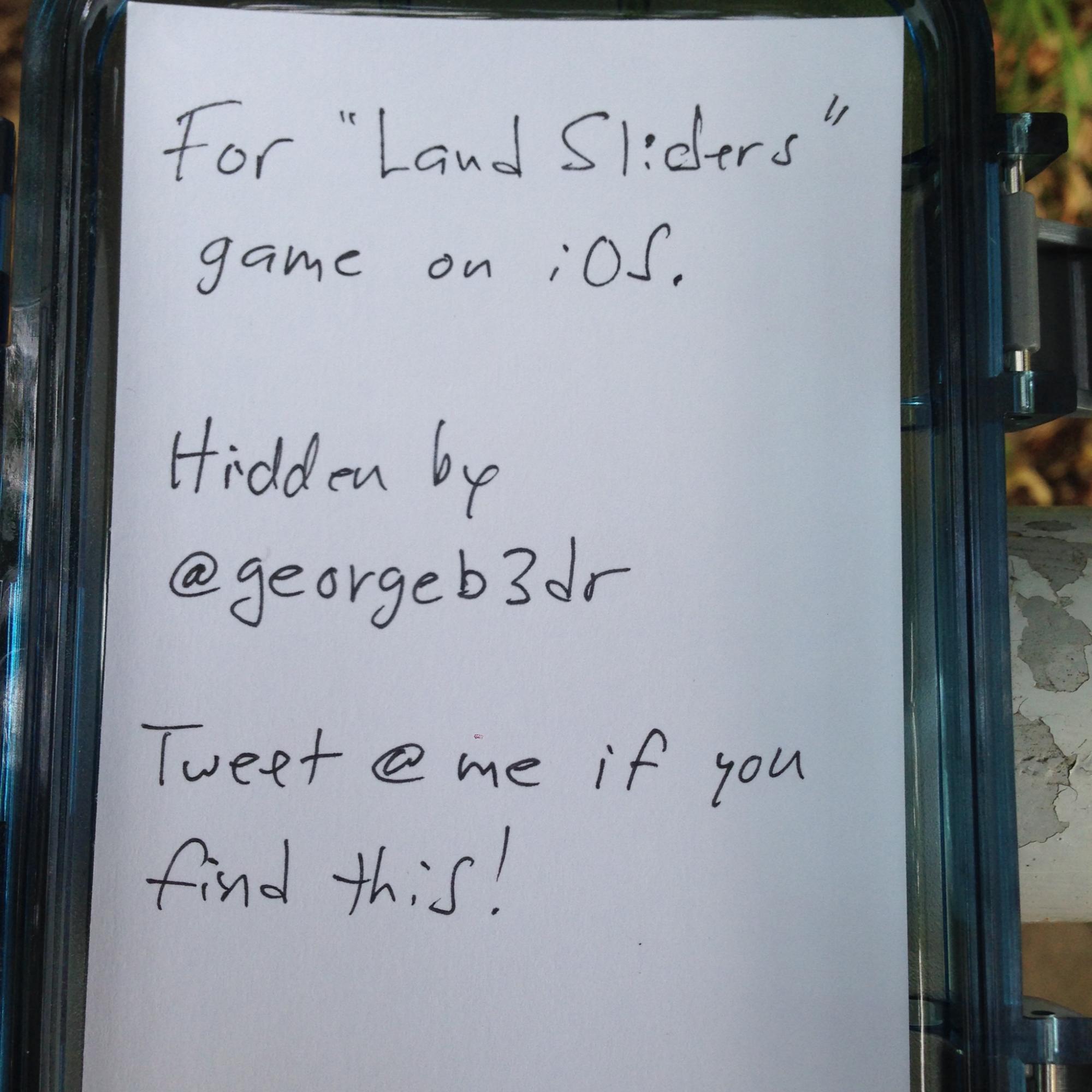