I had several moments while playing EinheitB’s Cavernaut ($0.99) where I thought to myself, “This is exactly why I love mobile." It’s a game that’s probably not going to change the world, but that’s okay. It’s just a great, tight little experience that could really only exist on this platform.

In Cavernaut you play as a little LEM-inspired craft that needs to make it to the surface of a very deep and complex cave system. (Actually, the craft–and the game itself–was probably more inspired by Atari’s classic Lunar Lander than anything humans have done in real life.) Each round begins with your little ship at the bottom of a randomly generated cave, and your job is to tilt and thrust your way up as far as you can before running out of fuel or crashing into something deadly. The fuel needs to be used carefully, since each time you fire one of your jets you’ll be expending a small amount of it. It adds up (or subtracts, I suppose) quickly, but thankfully there are refueling stations scattered about that will top you off if you land on one. 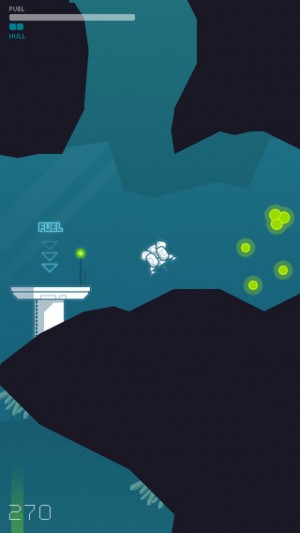 That’s the gist, but there are also a number of items you can collect along the way. First, there are glowing yellow dots called Luminum Crystals. These contribute to your score, but they also act as the game’s currency (which we’ll get to in a bit). There are also powerups to collect that enhance your lander’s abilities for the duration of your run. Finally, you can seek out little yellow cubes that unlock mysterious artifacts. These don’t affect the gameplay at all, but provide a welcome long-term goal if you are a completionist.

All of this is pretty basic stuff, but what surprised me about the game is how it all comes together into a tense, surprisingly strategic experience. Since each cave is randomly generated and the game only shows a little of what’s on either side of you (since it’s in portrait) you literally have no idea where any of the rocky shafts and corridors lead to. Do you go down the narrow path on the left, hoping it leads to a useful power-up or artefact for your collection? Or follow the group of luminum crystals on the right? You still have half a fuel tank left… maybe you can risk doing both? Weighing the potential monetary and score gains against the cost of fuel is a constant battle between risk and reward that did something I did not expect: it made me feel like I was actually the commander of a mission making important decisions, rather than a dude sitting on the toilet screwing around with an iPhone game. 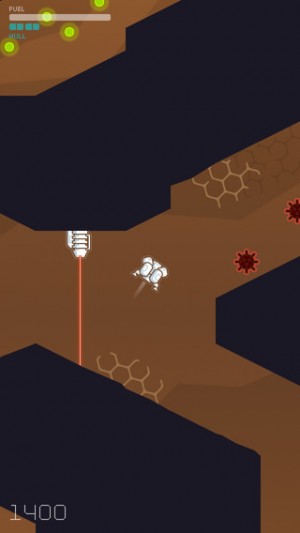 I think part of the reason your choices seem to carry so much weight is that each round can last a really, really long time for a mobile game. Most of my runs go well over 20 minutes, and trust me–when you’ve come that far, you really don’t want to make a bad decision and end up wasting your last amount of fuel on a long, dark dead end. Alternatively, when you take that risk and end up finding something really helpful and then barely make it back to a refueling pad, it can feel amazing. For example, at one point I ran out of while fuel chasing a big group of luminum crystals, and I used my last couple of fumes to push me over to where I thought there was a fuel pad down below. I fell for what seemed like ages, and landed right in the middle of it. I seriously cheered out loud.

As great as the game is, though, there are a few minor issues I had. For one thing, the game consistently froze right before the title screen on my iPad Air. A few people in the forums had this problem as well, and it apparently has something to do with Game Center, iOS 9, and not having much space on your device. Luckily it seems to be a pretty rare problem that could be fixed easily, and the game plays perfectly on my iPhone. The biggest problem I had, though, is that the power-up upgrades in the shop are pretty pricey. It’s not that big of an issue, but just be aware that it will take you a while if you want everything maxed out. (Also, the game is fully premium, so you can’t just buy a coin doubler or anything like that.)

I think it’s fair to say that Cavernaut surprised me. Judging by the screenshots, the game looks like it’s simply a fun, modern take on Lunar Lander that’s been tailor-made for mobile. I suppose it is that to a degree, but it’s also surprisingly deep and stressful at times. Maybe it’s an exaggeration, but to me it feels like one of those rare games that you don’t want to play again right away, not because it’s bad, but because you’re just exhausted afterwards. How many other 99 cent games can you say that about?