Starseed: Origin ($2.99) is not a game you play for an original concept or to casually tap with half your attention elsewhere. Starseed is a game you play until it gets too hard and too fast and you blow up and die.

Crescent Games’ recent release is a throw back bullet hell style space shooter with some really solid chops. It’s interesting that a developer who is already known for a bullet hell game(Operation Dracula($2.99)) has made a game in the same genre, but with a much different theme and feel. What’s more interesting is that Starseed is a legit and slick homage to how shooter games used to be.

I think it might be best if I borrowed a quote from the poet Ernie Cline to convey the feeling of Starseed: Origin to you:

we didn’t have any fancy Sony Playstation video games
with high-resolution 3-D graphics.
We had the Atari 2600!
With games like Space Invaders and Asteroids.
And the graphics sucked ass!
Your guy was just a square!
You had to use your imagination!
And there were no multiple levels or screens.
It was just ONE screen, forever,
and you could never win.
The game just kept getting harder and faster and until you died.
Just like LIFE!

Cline is a little bit crazy, but I feel like he really would like Starseed: Origin. With a killer soundtrack and low res graphics, it fits right in with the games many of us can still remember playing back then. The great part is that there are some nice touches that would probably not have graced those games of old. 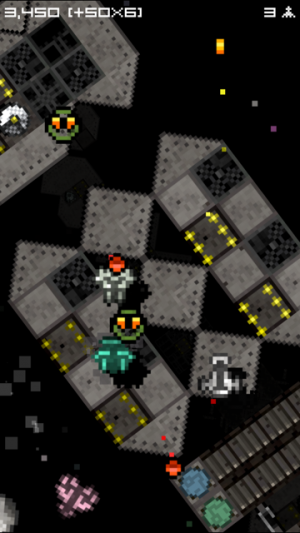 The level design in Starseed is pretty cool. Each level you approach the space station you must ultimately destroy but before you can do so you must fight and survive waves upon waves of fighter sized spacecraft as well as asteroids and explosive mines set in your way. As you circumnavigate the station, the shields eventually weaken and you can take aim at towers and defensive structures on the surface of the station. Once you kill it all, you race away from the debris caused from the explosion towards victory!

If that sounds familiar, well you probably have seen Star Wars before. If you are going to copy a plot, I suppose it may as well be a good one. Each level has a really nice crescendo of action that leads up to a frantic rush of enemies swarming you as you put the finishing touches on their beloved base. After the first few levels, the difficulty really ramps up and even with multiple lives it becomes a challenge to survive until the end.

As you beat each level, you unlock a brand new Starseed ship to fly and they generally get better as you go along. Fast bullets, double bullets, multi-directional bullets and more await as you burn down base after base. The trick to keeping your upgrades is that you need to be able to deftly avoid all the garbage flying at you and pick up shield buffs to keep yourself alive. Dying won’t immediately end your run, but you do lose all previous upgrades on death. 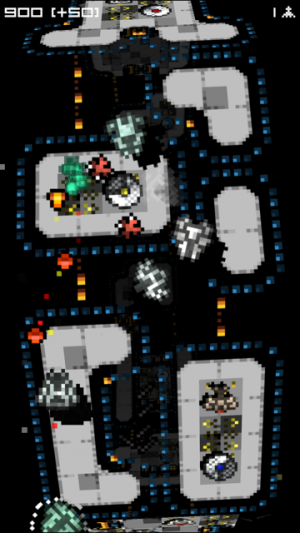 You start the game with 5 lives and however many you finish a level with, that is how many you can take to the next level even if you start a new game on that later level. This means that just skating by a level is going to give you less lives in the future than clearing a map without dying. You can also rack up big scores by ‘grazing’ bullets when you have no shields. If you get a big enough score an additional life token spawns so you can actually end a level with more lives than you entered with if you are exceptionally skilled.

Really the only things I wish were different about Starseed would first be mifi controller support and secondly a slightly larger screen resolution just so I can see enemies coming from a little further away. They are not huge problems and they don’t really detract from the overall quality, but the controller thing especially would be really sweet. As it is, my finger ends up covering up possible attack vectors and creates a blind spot that a controller would alleviate.

Starseed: Origin has a faithful Atari veneer and intriguing game play elements that will keep you engaged and trying to beat your previous best even on early levels. If you don’t dig the pixel scene, you can probably safely avoid this but anyone that wants a quick shot of nostalgic action, you can’t go wrong here.