I first heard about Mozart’s opera The Magic Flute when I was a music major in college. I remember thinking the title was sort of ridiculous, and the plot seemed equally silly. Something about a guy and his bird buddy meeting some witches or something and then rescuing a princess somewhere. And, of course, there’s a magical flute. It was hard to take seriously since opera was never my thing, but reading about it on wikipedia all these years later it actually sounds kind of interesting. The main plot is supposed to be kind of light and silly, but underneath there’s a subtext about religion, reason, and enlightment. Oh! And there’s an iPhone game based on it now. Did I mention that part? 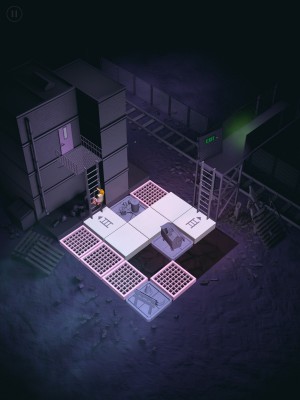 In Lab Like’s Magic Flute by Mozart ($3.99), you are basically following the first act of the opera, as staged by the legendary Amon Miyamoto (for all you Amon Miyamoto fans out there). The actual gameplay is basically a bunch of sliding block puzzles spread out over 32 levels. You usually start each stage with one or two of the main characters (most often it’s some combination of Tamino, Pamina, and Papageno) and you’ll have to guide them to an exit door to “solve" the puzzle. Sliding the tiles and blocks they have to walk on is as easy as touching and dragging, but the rest of the game is anything but easy.

It starts off simple enough, and indeed the game bills itself as a “casual puzzler", but more than a few of the puzzles had me tearing my hair out. There are tons of traps, enemies, switches, and un-moveable pieces that have to be considered and worked around to get your characters safely to the end, and it’s kind of surprising how complex things can get when the board is so small and constrained. Making things even more difficult is that you can speedrun each stage for a better rating, which is often required to unlock later levels. (I must confess I have a sneaking suspicion I’m just bad at sliding puzzles in general, though, so feel free to take this all with a grain of salt). 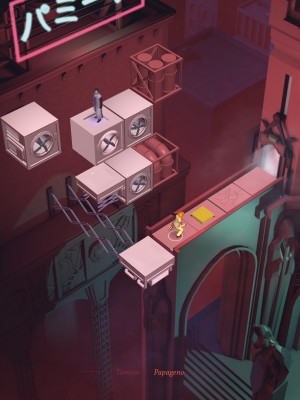 Visually the game is really impressive. It sort of reminds me of a cross between Monument Valley ($3.99)’s colorful surrealism with Hitman Go ($4.99)’s sleek, square look. It works really well and lends a lot of fun character to the game while keeping everything easy to see and keep track of. The cutscenes in particular are well-done, despite being almost completely static. As far as audio goes, there is some nice, professional sounding voiceover narrating a lot of the action and simple sound effects when your characters walk or when you slide things around.

The music is obviously one of the most important parts of the game, but it also winds up being one of the most disappointing. It sounds good, as far as MIDI music goes, but I think having real musicians performing the score live would have made the experience a lot better. Of course, that would have been way more difficult to incorporate into a an interactive game (not to mention several orders of magnitude more expensive), so I can’t really fault them for not going down that route. 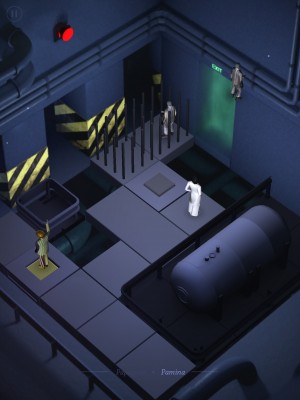 There are a few other things that hold the game back from greatness as well. First, it’s a little buggy sometimes. On more than one occasion I saw characters walk off the board entirely and start floating into some nether-space, never to be seen again. Also in that vein, the movement of the patrolling guards in later levels seemed kind of random and hard to predict. Sometimes they would walk back and forth how they were supposed to, and other times they would just stand still as if trapped by some invisible force. My biggest problem, though, is how unclear it is how fast you’re supposed to solve a puzzle to get a three flute-hole rating (which is the equivalent of a “three star" rating in other games). There’s no timer in the game to show how fast you’re going, and there aren’t any goal times written anywhere to tell you what you should be shooting for. And, as mentioned earlier, you often need to get the best rating you can to unlock more levels. I can’t express how maddening it is to play a particularly hard puzzle over and over until finally getting what seems like a superhuman time of 40-something seconds, and still only get two stars with no indication of how close or far you were from three.

In the grand scheme of things, though, those are fairly minor gripes. What the game does well (the visuals, the way it tells the story, and the challenging and satisfying nature of most puzzles) it does really well. I don’t think I’m cultured enough to fully enjoy the opera part, or smart enough to really get the most out of all the puzzles (see: speedrunning), but I still greatly enjoyed the overall experience of playing through Lab Like’s Magic Flute by Mozart.