So, there’s some interesting news today as FanDuel, the daily fantasy sports service, has bought out AlphaDraft, a fantasy esports service where people can assemble a team based on members of real-world eSports teams, and win prizes by assembling the best team based on daily performance. Up until now, FanDuel has focused on traditional, real-world sports, but they’re jumping into a burgeoning market that seems only poised to explode to bigger heights in the coming years.

And the potential for massive scandals is a huge issue.

Right now, AlphaDraft supports Hearthstone (Free), and it’s not hard to see where other games could come into play. Heck, maybe the secret for Vainglory (Free) or Call of Champions (Free) or whatever MOBA wants to try and take off on mobile would be to get gamblers’ attention. After all, football is the biggest sport for fantasy and gambling purposes, and it’s a tremendously watchable event. Other eSports that are viewer-friendly could easily attract potential gamblers, and short-session mobile games could be the trick to mainstream eSports acceptance, and the rise of eSports gambling.

And yes, daily fantasy is gambling. It’s barely legal in the US thanks to restrictions on online gambling allowing for fantasy sports to operate. Daily fantasy services operate under that fantasy sports loophole, offering contests with fixed entry fees where players choose a team of athletes, and hope they perform well enough to win them money. Daily fantasy services claim that it’s a game of skill, and there definitely is an element there, but let’s be real. It’s barely-legal gambling.

If you don’t think so, let Scott Van Pelt, a long-time ESPN personality and major sports gambling aficionado, explain it to you.

Daily fantasy has such money behind it – FanDuel is valued at over $1 billion, DraftKings has another massive valuation and a parternship with ESPN. If you watch any sort of sporting event, you know that the ads for DraftKings and FanDuel in particular are ubiquitous. Even television show The League got into it recently by literally having an ad integrated into the show. 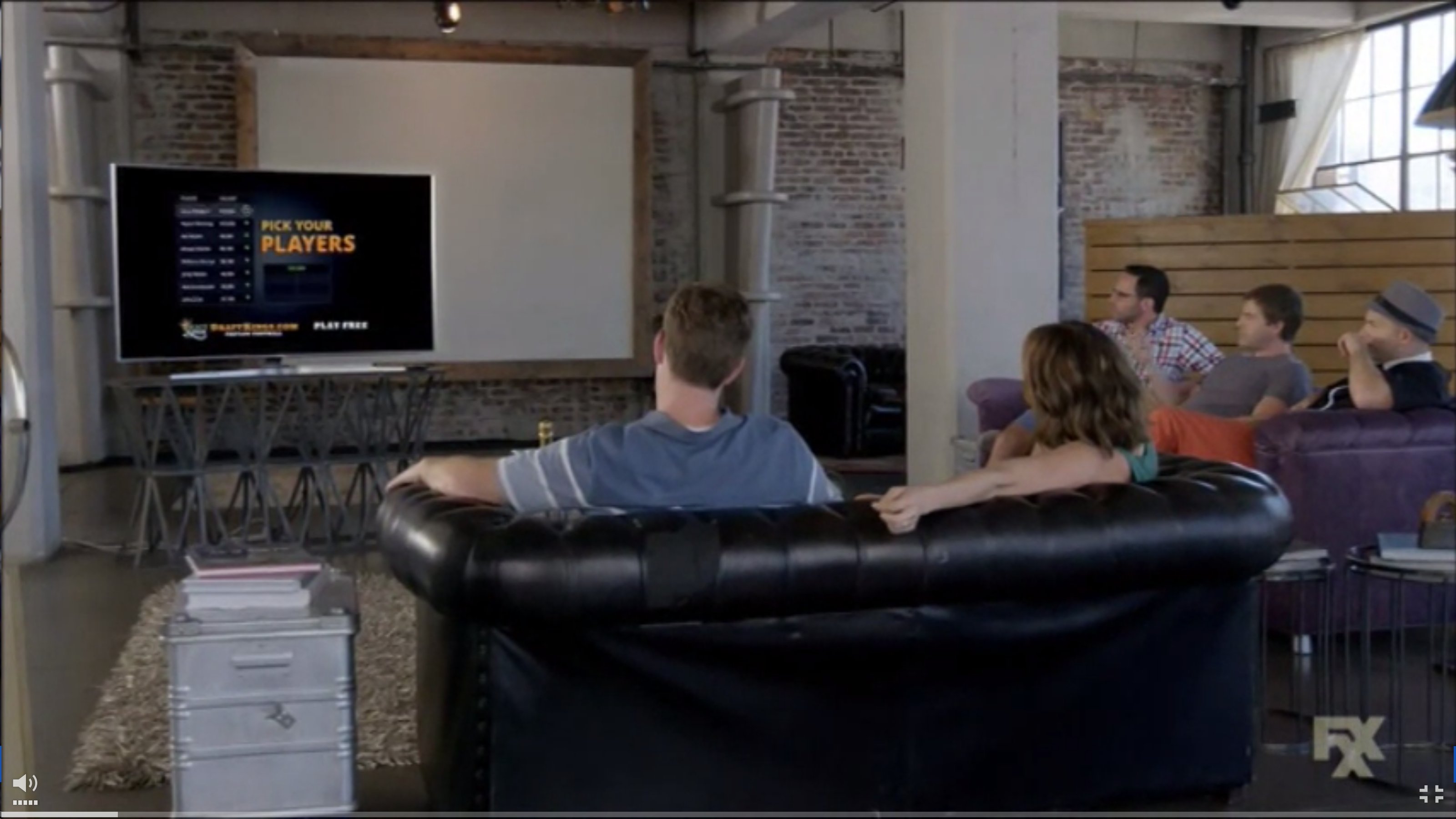 With daily fantasy currently operating as legal entities, and with those companies, along with the leagues and networks they directly partner with, there’s a lot of money there. And it makes sense that FanDuel would want to get involved in fantasy eSports. After all, if you’re a company living on the razor’s edge and have millions to burn, you might as well try to stay as relevant as possible. Plus, there’s so many eyes on eSports, and such a potential global audience, that it makes sense that there will be people who not only care about eSports, but would be willing to gamble money on the events. So yeah, FanDuel buying AlphaDraft makes a ton of sense.

Let’s look at a mobile MOBA like Vainglory, where there’s an interest in getting an eSports structure going. Why not build intrigue for these events by partnering with a daily fantasy service to get people to care through the allure of gambling via daily fantasy sites? Maybe it won’t work, maybe it’s putting the cart before the horse, but if it works to make the game a sustainable long-term moneymaker, why not? Considering the potential of mobile gaming and eSports, where there’s a potential audience of billions, it might behoove those interested in jump-starting eSports on mobile to get involved with daily fantasy eSports, and it might be what causes enthusiasts to jump over to mobile games in bigger numbers.

My number one concern with the rise of daily fantasy eSports is that there’s a much higher chance of corruption, which could hurt eSports in general, due to the fact that eSports leagues don’t have the structure and security that professional sporting leagues have established in order to resist corruption.

While many of the threats of high-stakes, low-morals gamblers wanting to ensure their payouts by paying players to underperform in order to give them an advantage in making money are common among sports and eSports, consider the difference in the nature of the threats. In sports, here’s plenty of built-in factors to dissuade players from getting involved. One is that salaries for the big men’s leagues are absolutely massive at this point, that the potential gains from point shaving feel like unnecessary risks when you could be getting $10 million a year just for being a semi-competent player in your sport of choice. Plus, only a small selection of gamblers are going to have the money to influence players, as compared to say, college sports where athletes not being paid as employees of their schools – which I believe they should be – could be influenced by moneyed interests to partake in throwing of games and point shaving.

As well, there are many cultural factors involved in making gambling’s influence in sports a smaller factor. Baseball in particular has dealt with gambling and cheating issues in the past. Notably, the 1919 White Sox were accused of throwing the World Series, and Pete Rose is still banned for life because he bet on baseball while managing the Cincinnati Reds. There are “no gambling" signs posted up in every clubhouse. And the attitudes on cheating in general is skewed so much that players are in favor of harsher penalties against performance-enhancing drug users in baseball.

Where fantasy eSports causes a problem is that the esports haven’t suffered the drawbacks of gambling for this to be a default, ingrained part of their culture. Plus, there’s the concern that because these are built around such transient games. No one’s really concerned that we’re not going to be playing baseball in 3 years, but it’s quite possible that 5 different games could be on the sidebar of AlphaDraft, or FanDuel’s esports section, or whatever it winds up being. Even then, with new leagues and other contests constantly appearing, opportunity is ripe for unscrupulous parties to make money if there’s money to be had in the results of eSports contests. Oversight of these leagues and participants to ensure that contests are fair is difficult when there’s so many moving pieces. And because the possibility for corruption is so high, I fully believe that daily fantasy eSports will lead to a major scandal when a player willingly underperforms in order to make money from unscrupulous gamblers looking to profit.

Cheating is already going on with eSports gambling still in its early days. Hearthstone players are already cheating during major tournaments, and a major Nvidia-sponsored tournament had matches that were not played, and instead decided by coin flips. There is a blue ocean of possibility for those who want to fix matches and influence the results to increase their gambling profits.

And the problem becomes this: eSports in general will suffer if gambling becomes a problem, for the same reason that it’s a problem with mainstream sports. The thrill of sports in general is that you don’t know the results beforehand, the drama that anything could happen at any moment is part of the thrill. And at least with wrestling, you know that the entire thing is scripted, sure. But there’s drama in not knowing what will happen, and the marvel at the physical performances of the wrestlers. And the audience knows that it’s not real…hopefully. But with sports, audiences need to know the bargain ahead of time. If there’s any legitimate form of uncertainty over that events portrayed as genuine competitions of skill are actually influenced in the name of moneyed interests, then people will stop watching.

The onus falls first on major daily fantasy providers looking to get into eSports to work with the leagues to ensure that contests – both for the eSports competitors and for the people gambling on them – are fair contests.

But also, while I’ll admit to having a very libertarian “people should do what they want if it doesn’t hurt others" streak when it comes to personal freedom, and I think daily fantasy should be legal, I also think that it should be regulated as gambling. Gambling regulations help ensure that while the games are always set up in such a way that the house always wins, players know that they are partaking in fair contests, and have recourse if things go wrong.

Companies could try to disavow eSports gambling in any form, but I think it would fail. The problem is that it’s something that people want to do, and publishers and leagues are better off making it something where they have a say in how it’s operated and regulated so as to preserve the fairness of their contests. Their integrity is at stake, and if the NFL can’t stick its head in the sand and pretend sports gambling doesn’t exist, then eSports leagues sure can’t. There’s too much interest from all sides for this not to be something that eSports leagues need to be involved in, for the sake of their leagues. Gamers can be an often conspiratorial bunch, after all.

But right now, even if the big names in daily fantasy are legitimate operations – and I’m not sold that they are – there are plenty of smaller players that could easily fleece players who generally think that the concept is safe. And thanks to the largely un-regulated state of fantasy sports, it would be possible for a fly-by-night entity to take people’s money and run away. Or, in the case of corruption, for an unscrupulous entity to be permissive to having moneyed interests influencing events. This is especially worse in eSports, where the scene is so chaotic that cheating could be happening and it’d be impossible to tell.

Plus, even the game developers could be influenced by moneyed interests. Imagine it: these competitive games are massively influenced by even tiny changes in variables to dramatically shift the way the games play. So, if a cheater bribes a developer to perhaps surreptitiously alter the balance of a game, and then the cheater uses that knowledge to influence the events of contests, knowing who might be at an advantage in contests based on insider information…the possibilities seem endless in the chaotic world of eSports.

And that’s the thing that scares me about daily fantasy eSports: it’s gambling, and gambling attracts all sorts of issues since people are putting large sums of money at stake. But unless laws and regulations change – and I think there’s too much money from too many powerful sources for that to realistically happen absent a major scandal that makes supporting daily fantasy a toxic endeavor – then it’s here to stay. And there will be scandals. Especially if and when mobile gaming and its massive audiences play a bigger role in eSports, and the money involved starts to draw the eyes of those who see that they can cheat a system that is ripe for manipulation. The onus is on developers of eSports-focused games and the leagues to balance out the desire for fans to gamble with ensuring that gambling doesn’t have a wayward influence on their contests, because the opportunities will only get greater from here on out.