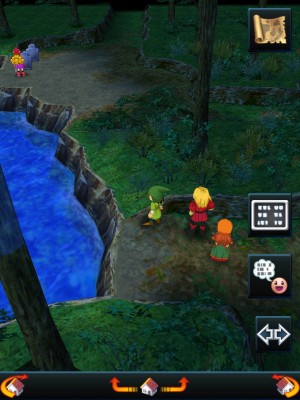 The last of Square Enix’s announced ports of the mainline Dragon Quest games arrived in the Japanese App Store late last week, and although I’ve been pretty busy, I’ve still managed to tuck in around 20 hours on it. Now, that’s only between about a fifth to a quarter of the way through Dragon Quest 7, the longest game in the series by a good measure, but I think it’s far enough to give you my impressions, friends. Fair warning: although I’ve called this article a preview, we have no confirmation or clue as to whether or not Square Enix plans to localize this game outside of Japan. It’s a massive game and it needs a completely new English script. That was enough to keep the Nintendo 3DS version from making the jump so far, and it very well may turn out to be the case here.

That might be the worst news in the whole preview, actually. The port itself is superb. Based on the Nintendo 3DS remake rather than the PlayStation 1 original, the iOS version of the game was developed by the very same developer that created the 3DS version to begin with, Arte Piazza. The upshot of that is that the game runs just as smoothly as it did on the 3DS, its framerate a far cry from the tragic wheezings of the mobile port of Dragon Quest 8 ($19.99). Like the other mobile Dragon Quest games, it plays only in portrait mode, with the screen expanded vertically most of the time to fill in the extra space. Unfortunately, unlike Dragon Quest 8, the cut-scenes haven’t been redone here, so there are black bars at the top and bottom of the screen due to the original version’s dimensions. Another benefit of being based on a 3DS game is that this remake was designed to work with touch controls in the first place, so that big movement dial seen in the other mobile Dragon Quest games is nowhere to be found here, replaced instead with a floating virtual stick.

The original PlayStation version of the game wasn’t just noteworthy for its length. The way the story and world progressed were quite unusual, and there were a lot more puzzles than are typically found in Dragon Quest games. The job system is probably as big and full of possibilities as any implementation in the series, and in fact sort of approaches ridiculousness with its number of learnable skills and abilities. It’s been streamlined just a little bit in the remake version of the game, but it still offers an absurd amount of options. Better still, you don’t need to earn nearly as many job points to level up jobs, an appreciated gesture. Job changes are now reflected on your party’s character models, so you can see at a glance who’s using which job. 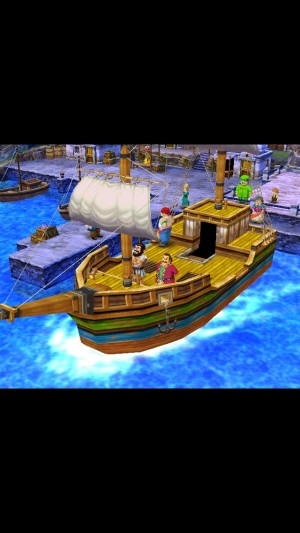 There are lots of other changes in store for players who remember the PlayStation version.  There’s a shard radar that helps you track down hard to find pieces, a necessary process for beating the game. The Monster Park and Immigrant Town have seen some pretty big changes, as well. But the most striking difference between the remake and the original comes down to presentation. Dragon Quest 7‘s remake looks and sounds outstanding. When the PlayStation version of Dragon Quest 7 first released in August 2000, it looked a little out of date, to be kind. That’s not a problem here, as Dragon Quest 7‘s remake can stand up with the best of the series visually. Everything is in full 3D, and the world map now looks more like the one in Dragon Quest 8 and Dragon Quest 9, with wide open spaces and treasure chests tucked away in places for explorers to find. Battles are also in 3D, with fully-animated polygonal models for both the enemies and the main characters. The soundtrack has been replaced with an orchestral version recorded by the Tokyo Philharmonic, and it sounds great.

For those who didn’t play the original version, and statistically that’s got to be a lot of you, Dragon Quest 7 is a bit of an oddball. The premise is that you’re a fisherman’s son who lives in a small village on the only island in the world. While you and your friend are exploring the nearby ruins one day, you stumble on a secret that will change the entire world. The game is most famous for its length, running anywhere from 80 to 100 hours for most players, and its puzzling nature compared to the other games in the series. Dragon Quest 7 basically builds up on high on what Dragon Quest 6 ($14.99) did. It retains and exponentially expands the job class system, adding in monster classes and tons of jobs not found in the previous game. It also doubles down on Dragon Quest 6‘s focus on smaller mini-stories, with the main plot almost entirely giving way to a ton of loosely-connected vignettes. Oh, and pack the tissues, friends. This one gets pretty emotional at times.

Even in this streamlined remake version, the game tends to feel a bit overstuffed at times. Yuji Horii never made another Dragon Quest this long again, after all. It’s not five hours to the first battle like it was in the original version, but you’ll still be waiting a long time before you can first beat a little slime senseless with a stick in this installment. I feel that the long introduction serves an important narrative purpose in the game, but it requires more patience than even RPG fans can sometimes muster. Is it worth it? I think so. I’m not going to say I love every little story in the game, and the main plot is kind of a hot mess, but the game delivers its main themes well. The remake version this is based on does a great job of pushing the strengths of Dragon Quest 7 while cutting back on some of its weaknesses, making for a more well-rounded and slightly less bloated game.

Here’s hoping you’ll all get to experience Dragon Quest 7 yourselves without having to study a foreign language. This is really a wonderful port of the game, perhaps the best mobile port the series has seen yet. I wish we had even a vague promise about a localization, but all we’ve got to go on is Yuji Horii supposedly spilling the goods on French localizations of the 3DS versions of Dragon Quest 7 and Dragon Quest 8. So keep your fingers crossed, and we’ll be sure to bring you any word that comes our way about an English version of this great game.