Ravenous Games has been around iOS for a long time. League of Evil ($2.99) was one of the first platformers on the App Store that actually worked, and it quickly became one of my favorite iPhone games. The controls were shockingly responsive (for the time), and speedrunning each level for leaderboard supremacy wasn’t just doable, it was actually really fun. Of course, these days there are hundreds of platformers on the App Store and it seems the genre has come a long way since LoE took over my iDevice all those years ago. Unfortunately, though, in a lot of ways Ravenous’s own games (which seem to make up about half of all the platformers on iOS) haven’t changed with the times. 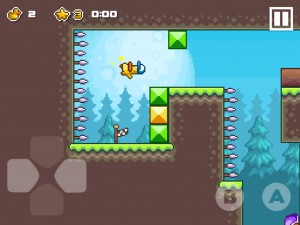 Take Gravity Duck Islands ($2.99), for example. (Hey! That’s the game I’m reviewing!) The game is extremely similar to its predecessor Gravity Duck ($2.99), with the exact same art style, button layout, and more. In fact, even the character model of the duck is identical down to the last pixel, as I found when I A/B’d the two games’ icons back and forth. (In fairness, though, you do have the ability to add a hat to the duck this time. So there’s that.)

For those who never played the original, here’s the basic idea: You’re a duck trapped in a series of small 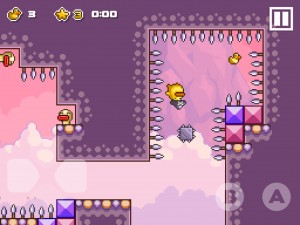 pixelated levels, and you need to find the exit. It seems like a pretty basic Ravenous platformer on the surface, but the gimmick setting it apart is that you can reverse gravity by hitting your trusty A button. Further, there are these swirly little yellow things scattered around each stage that turn gravity sideways. It lends a slight puzzle-y feel as you need to figure out the best (and fastest, if you’re so inclined) way to get to the finish without hitting any traps. There have been a number of platformers that use similar mechanics (most notably VVVVVV ($2.99)) and it works well enough here. 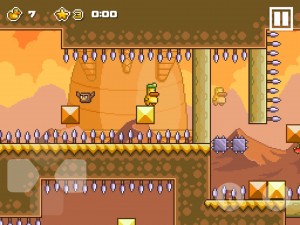 The main difference between the original Duck and this one is that each of the titular Islands has a brand new gameplay mechanic assigned to a new B button. In the first island you have the ability to jump, and in subsequent islands that same B button makes you inflate like a pufferfish (allowing you to float around slowly), teleport a short distance ahead (which is my personal favorite), and turn blocks from solid to empty (so you can stand on them or walk through them). Each one mixes up the game in rather interesting ways, and I looked forward to beating each section so I could try out the new abilities around the corner. The stages are all cleverly designed around your B button ability, too, making things feel even more puzzle-centric than the first game. 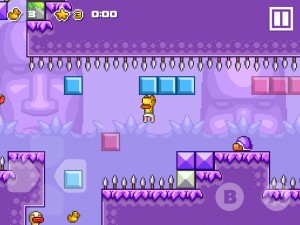 Unfortunately, while the new mechanics are a great evolution of the formula, just about every other aspect of the game is a bit of a letdown. (Note: I didn’t say “bad", I said “a bit of a letdown".) Take, for instance, the controls. They work well! Just like all Ravenous games. And that’s the problem: with few exceptions, all of their games have the exact same controls and don’t let you customize them. Are your hands a little smaller or bigger than the average person? Too bad. Also, despite allowing you to speedrun each level for a three star rating, there aren’t any leaderboards at all. Why even have speedrunning, then? And, of course, there’s the thing I mentioned earlier about how the game looks exactly (exactly) the same as the first one–and most other Ravenous games for that matter.

I suppose therein lies my real beef with Gravity Duck Islands: it’s just another Ravenous platformer. It feels like they had a hit with League of Evil and have basically been re-making it over and over with slightly different themes and mechanics. They make some new sprites, come up with one or two new wrinkles to add to the gameplay, and then send it off to the level designers. That might not be such a bad thing since their games are generally really fun, but a lot of times it seems like their newer games have fewer and fewer features (like missing game center support and no control customization). I can see how it might be tempting to view it as them phoning it in or being lazy, since it sometimes feels like they’re just hitting a big “MAKE RAVENOUS PLATFORMER" button on a computer somewhere and calling it a day (I mean, even their app descriptions seem copy/pasted each time), but in reality I think it’s just the nature of selling a game at 99 cents. They have a great formula and it’s probably just not cost effective to spend years making something wildly different. I guess this is really just a long way of saying that if you’ve played more than a few Ravenous titles over the years, you know pretty much what to expect with Gravity Duck Islands. Again, that’s not bad. Just… a bit of a letdown.