Seashine (Free) is an endless “swimmer", whereby the player is encouraged to guide a jellyfish hatchling through the darkest depths of the ocean, seeking safe passage from predators and clinging to small sources of light to part the watery blackness.

The goal is to beat your own high score, as well as compete for space on the leaderboard, by venturing further and further through the randomly generated levels. The player can explore a labyrinth of underwater caves, collecting sources of light, discovering secret passageways, dodging eerie aquatic enemies, and enjoying the tranquil and ambient soundtrack. 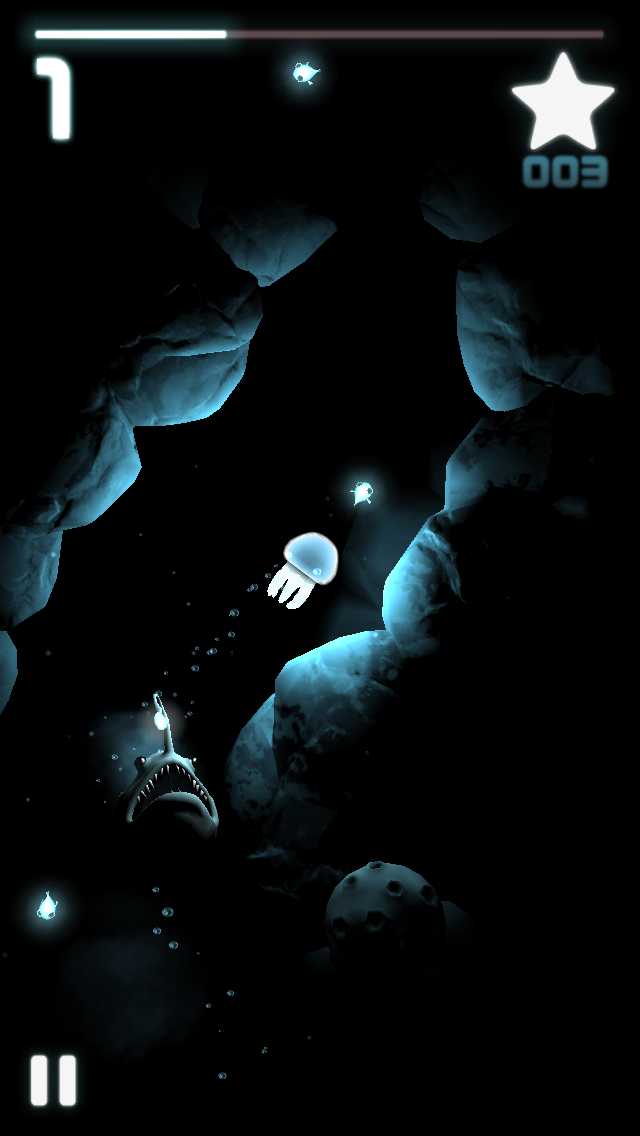 The tutorial offers precious few details, showing how to swipe for clumsy, floating movement and to tap to use a collected “star" to provide a few moments of prolonged illumination. Most details about goals and gameplay are provided through meta details, such as the iTunes app game description and the achievement list accessible on the homescreen. The game does not hold your hand. This made my initial few playthroughs challenging and more than a little frustrating. However, upon gleaning the required information, the minimalistic instruction actually fits quite smoothly with the game’s aesthetic.

The encroaching darkness provides suspense even amidst game action that, at times, feels frustratingly slow. The clumsiness of the jellyfish character seems at odds with the lyrical beauty of the game but this is also where most of the challenge comes from. Once you are used to the pacing and controls (this won’t take long), there is a simple joy to be found in fumbling and falling your way through intricate levels painted in moody blues. As you progress, power-ups can be traded for stars (speed boost, poison antidote, or a debris-clearing shockwave), which will make the levels easier. Watching ads will pay 3 stars, which is good because stars can be used as currency but are also important in-game illumination tools, so they are hard to save up.

The gameplay is simple and atmospheric. Movement through the seascape is accentuated by music and sound effects timed with the player’s turns, flows, bumps, and bursts. The ambient music is one of the strongest components of the gameplay. Shadowy sea creatures fade in and out of dark nooks, some benign and others deadly. The scenery is captivating and beautiful but also capitalized on that sneaking fear of dark waters that so many of us possess.

There is a terrifying sense of claustrophobia as the jellyfish character squeezes between cave walls and dodges falling debris, which makes the small pockets of breathable space even more enthralling. Seashine is a game with a lot of spirit, great artistic direction, and a clever blend of wonder and terror.