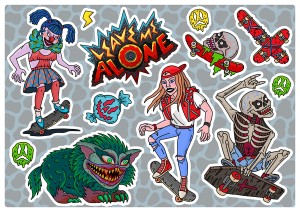 Have you played the beautiful and serene Alto’s Adventure ($4.99)? You know, that almost silent, introspective journey through a mountainous world filled with nothing but Lamas? Well, Leave Me Alone is what happens when Alto stops to smell the hallucinogenic flowers along the way. This upcoming game by Onvision Studio definitely has a weird, late-80s vibe and an art that will definitely be the game’s talking point. I’m not sure everyone will love the art style, by I’m all for crazy apocalyptic settings that look like Beavis and Butthead on peyote. The game has mutants, huge clowns, flying..somethings or others, and apparently you get to ride dragons and shoot down UFOs. Yeah, it’s that nuts.

While the art style definitely caught my eye, the gameplay also looks like a lot of fun as it’s an ambitious combination of skateboarding and combat that looks like it’s going to be a blast to play. The trailer shows some cool platforming action where you can use skateboarding tricks as weapons to defeat the various crazy enemies. Add to that Boss fights and a big variety of environments, and I think most fans of platforming games will be interested in Leave me Alone. The trailer states September 24th as a release date for iOS and Android, but we’ll see whether the game hits that date or not. Either way, looks like a fun game to me. If you like the game’s art, go to our forums and you might be able to get a sticker sheet from the game’s publisher.