I don’t want to waste your time here, so I’m just going to come right out with it: Gathering Sky ($2.99) by A Stranger Gravity is a game that’s probably not going to be everyone’s cup of tea. In fact, it’s barely even a “game” at all. There were long stretches during my playthrough that I didn’t even touch the screen or have any input whatsoever. It’s one of those games that’s more of an experience, maaaan. But stick with me here, ‘cause it’s actually a really good experience.

When the game begins, you have control over a single black bird soaring high above a patch of green land. Soon you meet another bird, and suddenly you have the beginnings of a flock. There are no instructions beyond letting you know you should touch the screen to direct the birds, but it quickly becomes clear that you need to follow the wind. As you travel and take in more of the scenery, you’ll collect more and more birds until you have a small swarm. At that point… well, you can just sit back and watch, if you want. The currents of wind can do most of the work for you. 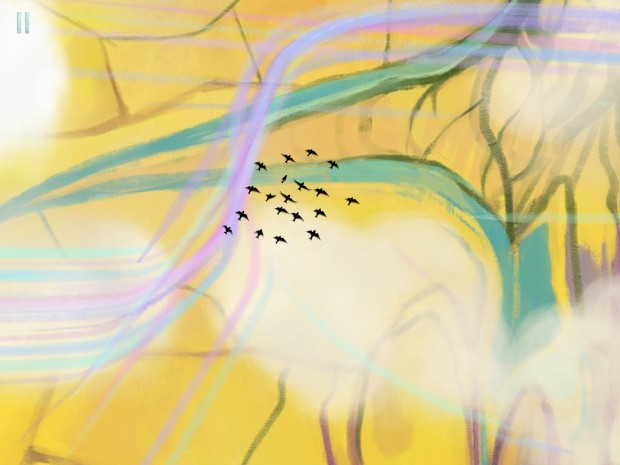 That’s it for the most part, though there a few wrinkles thrown in every once in a while. Sometimes you’ll meet larger birds that temporarily break up your flock, and there are glowing dots to collect in certain levels. The game never tests you or puts up a fight, but that’s not really the point of it. The point is to pop in some earbuds, sit back on the couch with your iPad, and listen to the wonderful music as your birds ride the wind over the hand-painted landscapes.

Actually, I’m not sure if anything in the game was literally painted by hand, but it looks like it, and that’s good enough for me. One thing that definitely is real, though, is the musical score. Written by Dren McDonald and beautifully performed by the San Francisco Conservatory of Music, the music is in some ways the real star of the game. It begins with low, dancing strings and a playful flute sitting on top and grows and expands from there. The hopeful melodies of the first few levels eventually give way to bleakness and despair as your flock dwindles later in the game, and I was surprised at how absorbed I became in the narrative it created.

Writing a review of a game like Gathering Sky is a bit tricky since it’s not the sort of thing where you can say “the controls could be better” or “the boss on level 34 was too hard”. There’s barely any gameplay at all, and the experience only lasts about 45 minutes. But it’s still an experience I’d heartily recommend to anyone who is vaguely into this sort of thing. The great music and colorful visuals do an impressive job of telling a complete story without words, and once you “beat” it you can go back and play through your favorite levels again as much as you want. On the surface it seems like a game with modest goals, but I think what it does is actually a lot harder than it looks. And, I’m happy to say, it pulls it off beautifully.