Not every game needs to have tight design. Those might be blasphemous words coming from a game reviewer, but there’s truth in them. I have great respect for games where every little aspect has been placed to work in perfect harmony with every other part, but games can also be unbalanced, messy things and still be a heck of a lot of fun to play. That’s the case with Demon’s Rise ($7.99), a turn-based strategy RPG from newcomer Wave Light Games. It draws its principle mechanics from popular SRPGs like Warhammer Quest ($2.99) and X-COM ($4.99), lets you form your party from a whopping 25 different characters each with their own skills, then throws a pile of content at you to merrily hack, zap, and smash your way through. It’s horrifically unbalanced, but it’s hard to care much about that as you guide your wacky group of characters through the monster-filled dungeons.

There’s trouble brewing under the dwarven stronghold Angor, and as these things go, it can only be solved by a group of exactly six members. Your party is drawn from a total of 25 different characters, and while the trusty fantasy stand-bys are well-represented, there are a fair few unusual choices for your consideration. You can choose some rare, but not unheard of, characters like samurai and mage hunters, or you can go all out and welcome Groot’s cousin and a bizarre walking cannon to your team. In addition to being differentiated by stats and usable equipment, each character has six unique skills that they’ll eventually unlock. Not all of these skills are terribly useful, but everyone has something cool they can contribute to the team. You can also choose to bring in multiples of the same character if you’d like, making for a massive number of potential party combinations. It should go without saying that some are considerably better than others, of course. 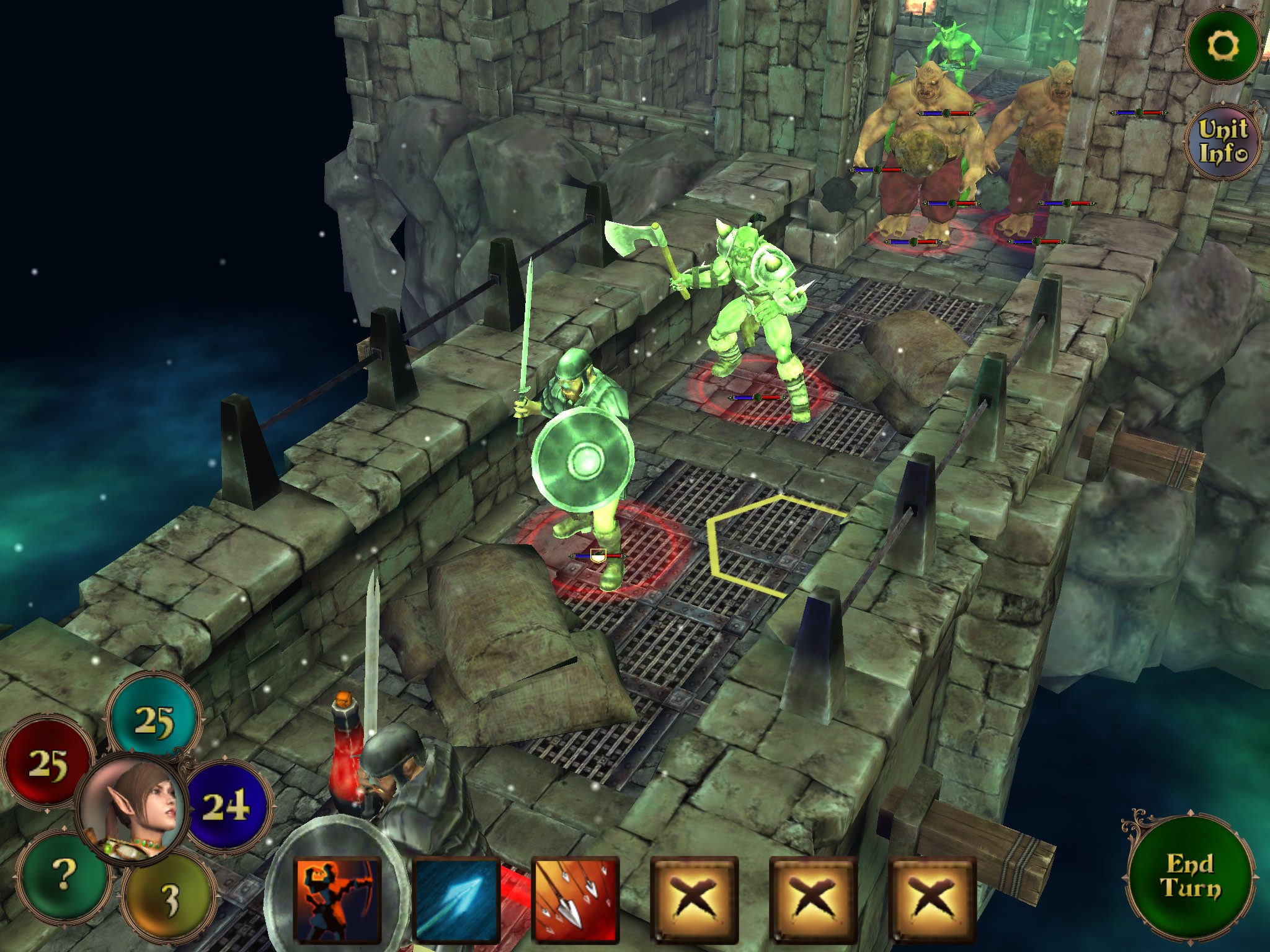 In general, Demon’s Rise seems to believe in generous portions. The campaign runs 67 stages long, and the roster of enemies includes 50 different creatures ranging from small, relatively harmless ratmen to huge dragons. While most of the lower-level goons are only differentiated by their stats and whether or not they can use ranged attacks, as you progress through the game, you’ll encounter a wide variety of enemy behaviors. The game isn’t shy about throwing an impressive number of foes at you, either. One of the random patrol maps I came across put me in the middle of a fight between a giant scorpion and what must have been more than a dozen other enemies. I had to choose when and where to butt in to this particular affair, and watching this huge battle play out while I picked off scragglers certainly felt epic. Of course, enemies won’t usually be at each other’s throats, so you’ll have plenty of opportunities to be the star of such massive battles.

The loot system is also great. Completing any mission will earn you at least a few treasures, and you’ll find new stuff in the shop every time you come back to camp. Each character has 13 gear slots, and many pieces are specific to a few characters, so you can imagine the variety of things you’ll come across. Magical gear uses a system similar to that found in games like Diablo, where various adjectives will bring certain effects to a piece. You never know what you’re going to find, and to be frank, you won’t be able to use a good chunk of it depending on the party you’ve put together. That said, the shop will pay a fair price for it, and odds are good that it will in turn be selling something you want. It takes a long while to come across enough pieces to fill out everyone’s slots, which makes it feel very special when you find something you really need. 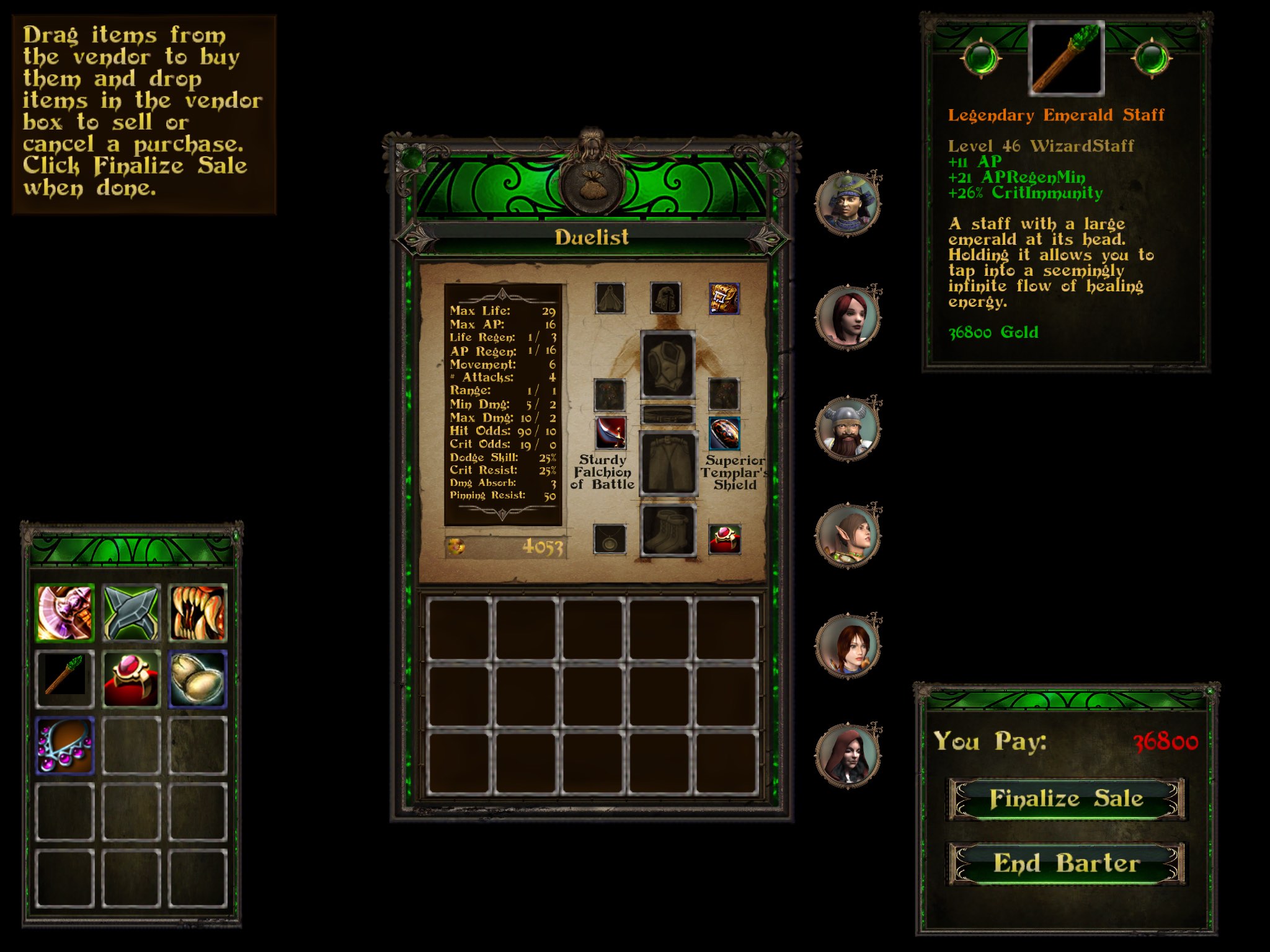 Along with the decision of who is in your party, the gear is your only means of customizing your team. Experience is counted at the end of each battle, and if a character has enough, they’ll automatically level up, gaining set stat bonuses and new skills here and there. You have no choices here. There aren’t any skill trees, and you can’t pick which stats to improve. Normally I might complain about this more, but I personally felt satisfied with the amount of input I had in my party’s composition as it was. I wish I could swap out members at my leisure during a campaign, though. As it is, if you want to try new characters, you’ll have to start a new game. It makes it a little tough to test out combinations. If nothing else, I suppose it gives the game solid replay value.

As for the actual battles, the game uses a fairly typical turn-based strategy system. You and the enemy take turns moving all of your characters at once. Characters can move a specific amount of spaces, attack, and use their skills provided they have enough action points. You can do all of these things on a single turn, and if you have enough action points, you can even use multiple skills. There are a couple of other interesting wrinkles in Demon’s Rise, too. Unlike many fantasy-based strategy games, you can make use of cover in this game. If you find a good place to tuck into, it gets very difficult for ranged attackers to hit you. Of course, this goes for the enemy just as well as it does for you. 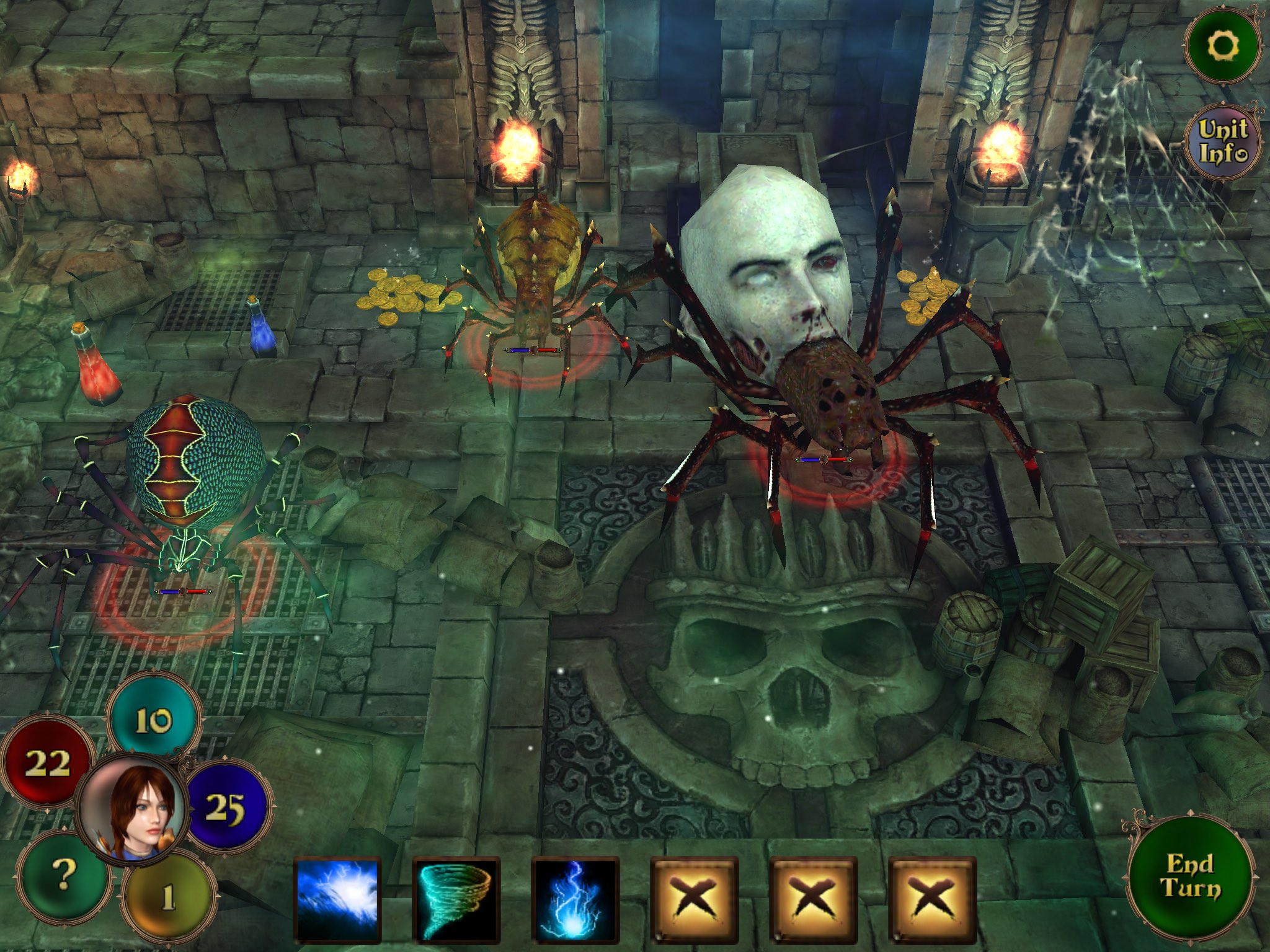 Another interesting inclusion is the game’s morale system. If a character or enemy is placed in certain situations, they might panic or go into a frenzy. Units in either state will be unable to use their skills until they calm down, among other effects. The calculations behind this are invisible, but generally, if things are going well for a unit, they’ll probably stay calm. If they get cornered or watch a bunch of teammates bite the dust, they might freak out. This gives you extra incentive for paying attention to your formations, as lone wolves can often find themselves losing morale.

Demon’s Rise offers a good range of difficulty settings, allowing you to pick what’s best for your skill level. Even on normal difficulty, there’s a pleasant bite to the game once you get past the initial few stages. Certain parties can break the game wide open, of course, but that’s all in good fun. The game is fortunately reasonably forgiving of defeat, simply offering you the choice to try the stage again or head back to camp to regroup. You don’t have to worry about permanently losing any of your team members or anything like that, at least. That gives you the freedom to try some wild ideas here and there, with the length of the stages adding a little tension to keep things somewhat in check. The missions are divided into two categories, quest and patrol. Quest missions follows a specific order that tells the game’s main story. The patrol missions are random and serve as done-in-one mini-episodes. If you’re unable to get your party past the current quest stage, you can always spend some time on patrols to beef up. 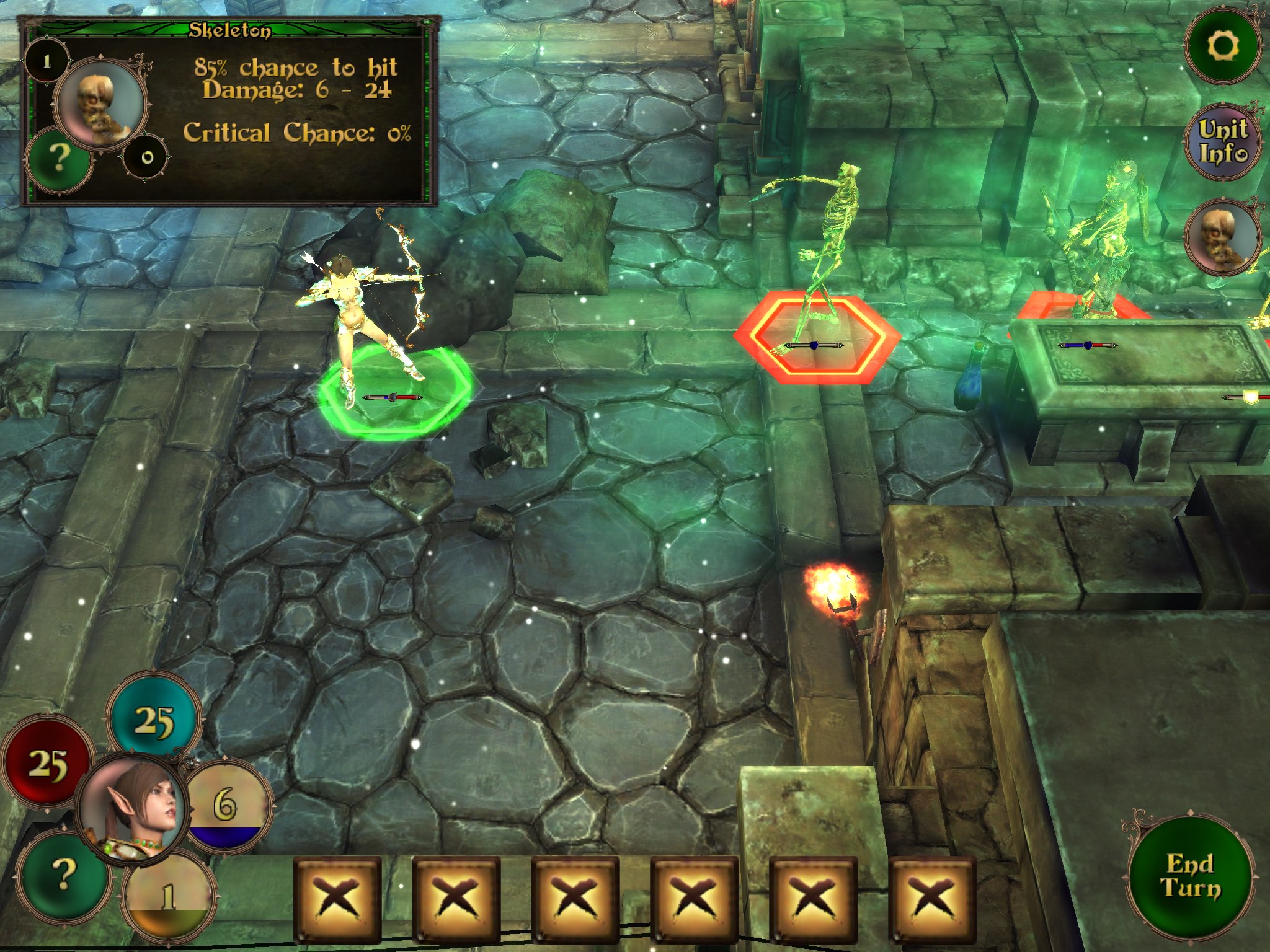 The presentation doesn’t let down its end of business, either. The visuals are very good, especially when you consider the amount of models and animations required for the huge roster of characters and enemies. You can adjust certain details in the options menu, so if you’re sporting a newer device and don’t mind the toll it takes on your battery, you should go ahead and flick on those settings when you start up the game to get the full effect. The main weak point is the lack of variety in your surroundings. The whole game takes place in the dungeons, and while the layouts differ from stage to stage, all the pieces look the same. It’s justified within the narrative, but it would be nice to have some other locations to battle in.

You’re free to move the camera around as you like, and while it can be a bit fussy at first, there are settings you can play with to try and find something that works for you. The audio side of things isn’t quite as strong. The music is good, and there are lots of sound effects, but it just doesn’t feel as immersive as the rest of the package. As far as the UI goes, it’s all very intuitive and easy to use, which is a good thing because the tutorial is a bit lacking. I also wish there were mid-battle saves of some sort. It doesn’t take much for the game to get kicked out of memory, and if that happens in the middle of a mission, you’ll have to start over again. Since missions tend to run over 20 minutes, not having this feature is pretty bad. 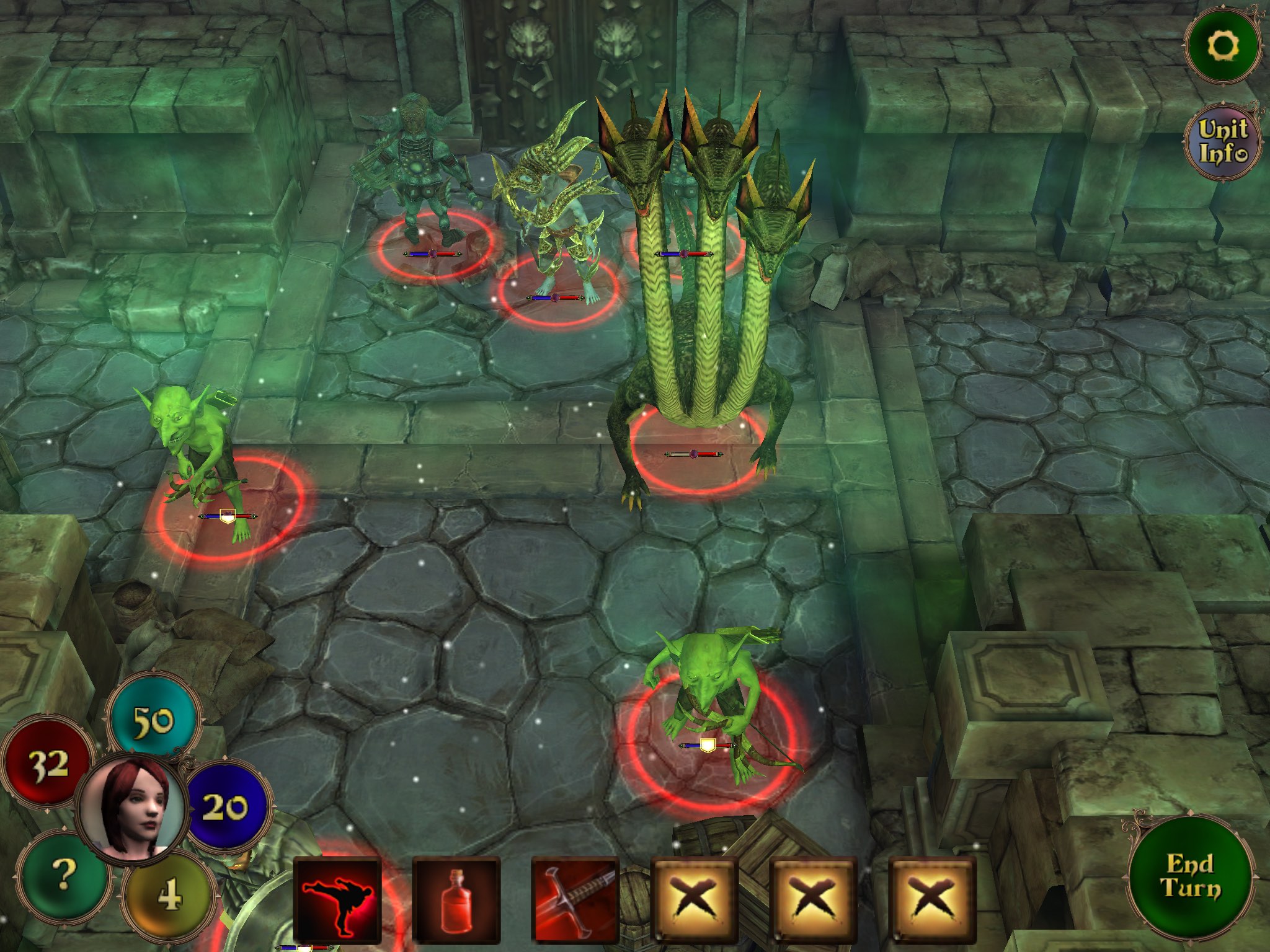 I should mention that I came across a few bugs while I was playing. Sometimes, characters would stop responding altogether, requiring a reset. The Illusionist character has a buggy skill that lets you control enemies, and I’d advise strongly against using it, since it can make the mission unwinnable, something you won’t find out until the very end of the map. Fortunately, Wave Light Games seems to be a very responsive developer. They’ve put out one update already, and they have two more ready to go that apparently fix these problems. Better still, they’ve already added one new character to the game at no cost to the player, and more content of all sorts will be coming in future updates. The idea seems to be that the price will be increased with each major update, so if you want in on the current ridiculously low price, you should probably dive in sooner rather than later.

While Demon’s Rise is probably lacking the balance, challenge, and polish to satisfy some players, I enjoyed the game quite a bit. That’s saying something, given the presence of bugs that ruined at least a few good runs. The sheer variety and amount of things to do and play around with outclass most of the game’s peers in this genre. It’s not doing anything particularly interesting from a mechanics point of view, but it’s a good, solid-constructed, enjoyable experience that offers plenty of genuine replay value. That alone gives Demon’s Rise an edge in a very competitive category. Plus, can you really say no to a team of misfits led by a minotaur?