It’s pretty difficult to pull off the first part of an intended series of stories. You have make sure you end it with a lot of possbilities in the air, but at the same time, you have to give people a satisying enough standalone plot that they’ll want to stick around. It’s especially important in games, where the player should feel some sense of accomplishment at the end of each part, particularly when the continuation might be a ways off. Versus – The Lost Ones ($3.99) is the latest release from prolific gamebook publisher Choice Of Games, and it’s meant to kick off an on-going series. It’s a successful opening in as much as I’m rather interested to see where the story goes from here, but taken as a standalone work, it’s a little mixed.

Adding to the difficulties is that author Zachary Sergi, who also wrote the popular Heroes Rise trilogy, isn’t simply introducing a new story here, but also an entirely new universe. You play as a young soldier from the planet Prisca, where a seemingly-impossible war is being fought against an alien force called the Blots. Through a series of events, you’re whisked away to a totally different world called Versus, where specially-selected beings from around the galaxy are brought to battle for mysterious purposes. If you survive and are deemed worthy, you will be reborn as a deity-like figure. If you fail, it means death on a world far from home. There’s also the possibility that you survive but aren’t considered worthy, in which case you wait around on Versus for the next round. Many of the odd characters you’ll meet in this gamebook fall into that latter category. 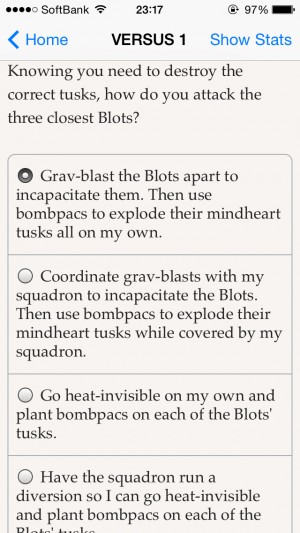 As you can guess, there’s a lot of world-building that needs to take place here, and some of it in a very short span of time. Your character’s homeworld of Prisca is fairly different from Earth in a lot of ways. Most of that stems from the special abilities of Priscans, which allow them to temporarily absorb the memories, thoughts, and abilities of others. The gamebook makes an effort to explain these cultural differences almost immediately, and it feels like something of a text dump as a result. At the same time, it does its best to give you a strong connection to your character’s family, presumably to give you something to care about at home after you’ve been taken away. At least for me, it didn’t work out very well. Once I’d hit planet Versus, it was pretty easy to forget about my character’s family, and I had little attachment to Prisca.

I didn’t care much for the initial sections on Versus, either. Thankfully, the explanations behind the planet roll out at a better pace, but you’re introduced to several characters in a very short amount of time, most of whom exit as quickly as they entered. It’s probably intentionally bewildering, trying to evoke the same reaction from the player that the character should be feeling. In a story that for me had yet to find any sort of grounding, it caused me to feel disengaged from the whole thing. Once it’s done marching out most of the important characters for introductions, the story starts to pick up a little. Your character has an ability that allows them to see past events that they weren’t there for, and this technique is used quite well to flesh out the story without adding more baggage to the main plot before it’s ready.

As you start to learn about the competing factions, personal agendas, and dangerous threats that surround the competition, Versus hits that sweet spot where it’s very difficult to stop reading. I wanted to keep going to find out as much as I could about this interesting universe and the various players in it. Of course, as first chapters must, The Lost Ones comes to an abrupt end without much resolved. It’s reasonably climactic, I suppose, but it’s clear that there’s so much more to come in the story that we’re unlikely to get an answer to the big questions anytime soon. It’s a slow starter with a strong middle and an ending that feels like it comes far too early. The quality of the writing is generally good, and it reads well enough, but it does suffer from the usual gamebook problem of having to justify why your character is the center of everyone’s universe. It’s only partly successful at that, at least for now. 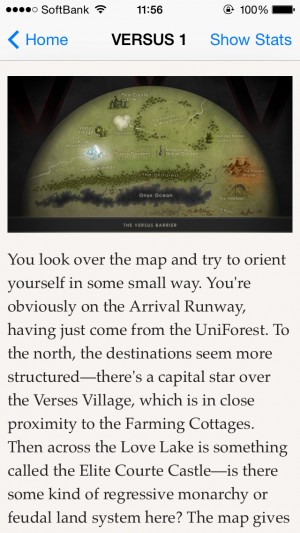 I also didn’t care for how open it was about its game bits. There’s a narrative excuse for why your character is talking about their stats and so on, but it feels like it’s knocking on the fourth wall a little too much, especially when it inserts its IAP sales pitch right in the middle of the story. That IAP is a trifle, so don’t worry too much about it. It just shows you the “best" choice in any situation. You can buy it for $0.99 if you want it, but I can’t imagine why anyone would do that. It’s possible to die in this gamebook, unlike some of the other games from this publisher, but it’s very, very hard to do so. Hard enough that there’s an achievement for it, in fact. That the IAP is there doesn’t bother me, though. It’s just that it kind of stops and turns to the camera to try and sell it to you as the story is in progress, with the characters themselves acting as the salespeople.

It felt like there were fewer choices in this gamebook than usual, and if action sequences are your thing, there are better places to look. Most of the maneuvering you do in this game is of the political sort, which made for a lot of fun selections. You’re most successful in Versus by picking a direction and playing to it. The game makes no bones about the disadvantages of being neutral, and if you try to sit in the middle too long, you’ll get some stern warnings. In general, I felt a little less free to play the character I wanted to compared to the last couple of Choice Of Games releases I’ve played. I’m probably just spoiled, given there are still several ways you could work your way through this one.

As usual for a release from this publisher, there are a handful of romance options, no matter which gender and sexual orientation you want to play as. Since we’re doing the whole sci-fi thing here, the possibilities even include androids or aliens from races without definable genders. The game uses non-gender-specific pronouns for the latter, which I’ll admit stuck out somewhat initially, but I quickly got used to them. After the somewhat clumsy handling of explaining the Priscans, I was a bit worried about how the many other beings would have their cultures described, but it was generally handled really well. I felt like there was a good variety on display, and although we have our usual space robots and space elves, there are lots of other interesting cultures and beings that you’ll get to know over the course of Versus. 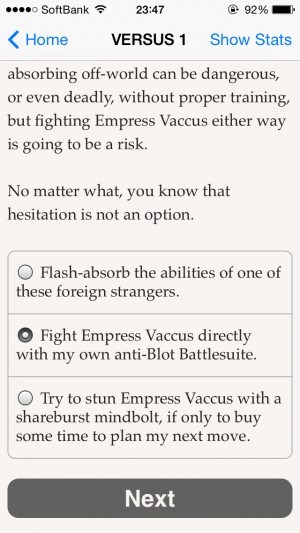 To tell the truth, I found about half of the romances to play out awkwardly. I imagine it’s difficult to try to realistically build a relationship between two characters in this format, but there’s an oddly direct nature to just about every romance option, and it only suits two of the characters particularly well. We’ll have to see how things go in future installments, though, since this one basically covers the start of each romance to their first physical encounter and not much farther. By any standards, that’s early enough in a relationship for things to still be awkward and people to be behaving out of their normal character. Fair warning: the sex scenes can get a bit spicy, so you’ll probably want to keep that in mind if anyone’s reading over your shoulder.

I probably don’t need to say it, but just in case you’re not already familiar with Choice Of Games, you shouldn’t expect much in terms of presentation. There are two pictures in the game, and one of them is on the title screen. The rest is just text on a plain white background, with radio buttons to make choices and a stats screen you can pop into and out of at any time to see how your various paramaters are stacking up. There isn’t any music or sound, so feel free to get your own music going while you play. Of course, one of the benefits of this approach is that it’s a very accessible game, with support for iOS’s Voiceover feature. I’m always happy to see that feature used.

I enjoyed the majority of my time with Versus – The Lost Ones, but a weak beginning and an ending that satisfies little of one’s curiosity definitely hurt the game overall. The world-building is strong on the whole and the plot is pretty interesting, even if the characters are a little thin so far. I’m invested in the universe and the plot, so the author certainly did his job well, but until I can see how that investment pays off, I’m left to judge this game as a standalone. In that capacity, it’s pretty good, but far from the best work from either Choice Of Games or Zachary Sergi.