There have been a lot of weird crossovers throughout the history of entertainment, and only half of them involve Angry Birds.  Remember when Inspector Gadget showed up on the Super Mario Bros. Super Show, or that time when Archie met the Punisher, or when the Harlem Globetrotters helped Scooby-Doo and the gang solve a mystery? If you look at it that way, perhaps Pocket God Vs Desert Ashes ($4.99) isn’t that strange after all. Still, a combination of Bolt Creative’s Pocket God ($0.99) and Nine Tales Digital’s Mecho Wars/Desert Ashes probably wouldn’t be the first team-up you would imagine for either franchise, and it certainly begs a question or two. How exactly could they reconcile the former’s simple god game mechanics with the latter’s Advance Wars-inspired turn-based strategy?

The short answer is that they didn’t. Mechanically, there’s absolutely nothing separating Pocket God Vs Desert Ashes from Nine Tails Digital’s now-delisted Mecho Wars HD. The Winged Crusade characters, along with a few other sprites, have been swapped out for Pocket God-related ones that nevertheless perform the exact same roles. Of course, the maps and layouts are all new, and present as much gameplay time as Mecho Wars. Even if one were inclined to be cynical, you’d have to admit this is at least a solid expansion pack on that point alone. That the original game has been pulled from the App Store lends this safe follow-up some additional value, as well. With that said, I can’t help but feel this was a missed opportunity to play around with the core gameplay a bit. Mecho Wars (or as it’s known elsewhere, Desert Ashes) has always lacked a certain sizzle when compared to its peers, and this crossover would have been the perfect excuse to throw in some hybrid elements to see how they went over. 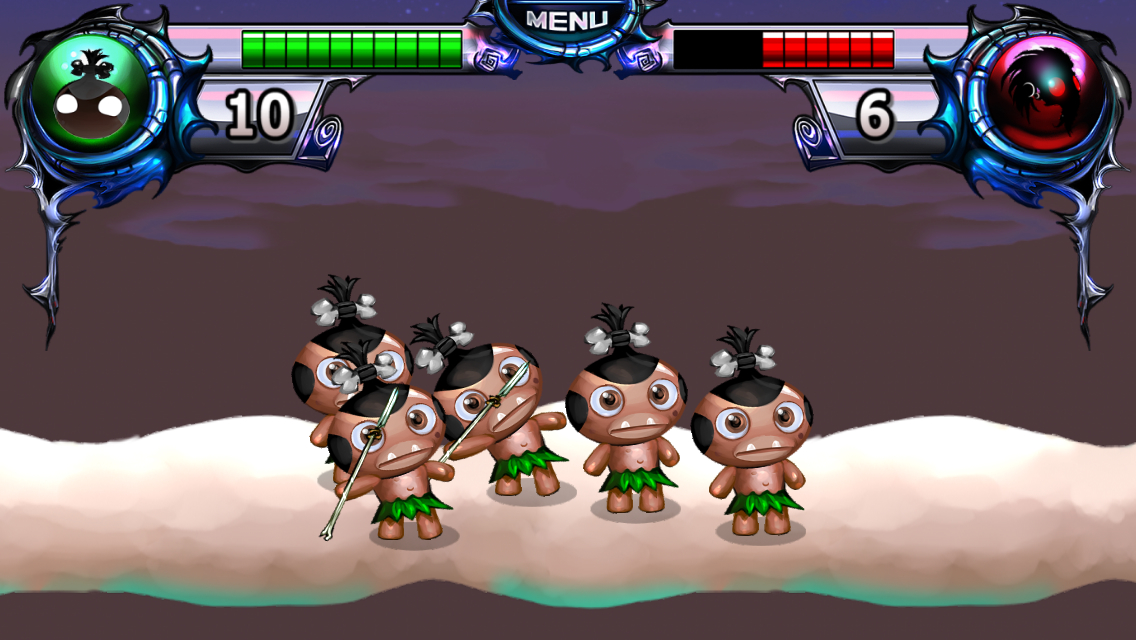 If you haven’t played Mecho Wars before, it’s a stage-based, turn-based strategy game. Two forces face off on a relatively small map that with various points that can be controlled by one side or the other to gain an advantage. Cities give you a chunk of cash each turn that you hold them, factories allow you to build units and increase the maximum number you can deploy at once, and headquarters let you build a small selection of units. More importantly, headquarters serve as your life on each map. Whichever side takes the other’s headquarters first, wins. There are other features on the map, such as different types of terrain that offer attack bonuses at the cost of impeding movement, or temples where a unit can pray to get healed. In general, the key to success is taking and controlling cities and factories, inching the line forward little by little. Points can only be captured by what are essentially the weakest units in your force, so you’ll need to create a path for them using more powerful units. Naturally, you’ll also need to defend your own controlled points, because they’re just as easy to lose as they are to gain. If you’ve played Nintendo’s seemingly-defunct Advance Wars series, you’ll find this game to be quite familiar.

Like its predecessor, Pocket God Vs Desert Ashes offers three modes of play. You can go through a single-player campaign which spans a dozen or so proper missions, play online across platforms through Nine Tails’ Mecho.net service, or do single-map skirmishes against either the computer or a local friend. The first part of the single-player campaign acts as a tutorial, but after a few maps of showing you the ropes, business picks right up. Some of the missions in the single-player mode can take between a half hour to an hour to finish, depending on how you play. It’s not terribly difficult to win, but progress is hard-won in certain maps to the point that financially starving your enemy is one of the best strategies. Like Advance Wars, it’s awfully hard to make a comeback once you start losing in Pocket God Vs Desert Ashes, and unlike that game, there won’t be any miraculous CO powers to bail you out in a pinch. 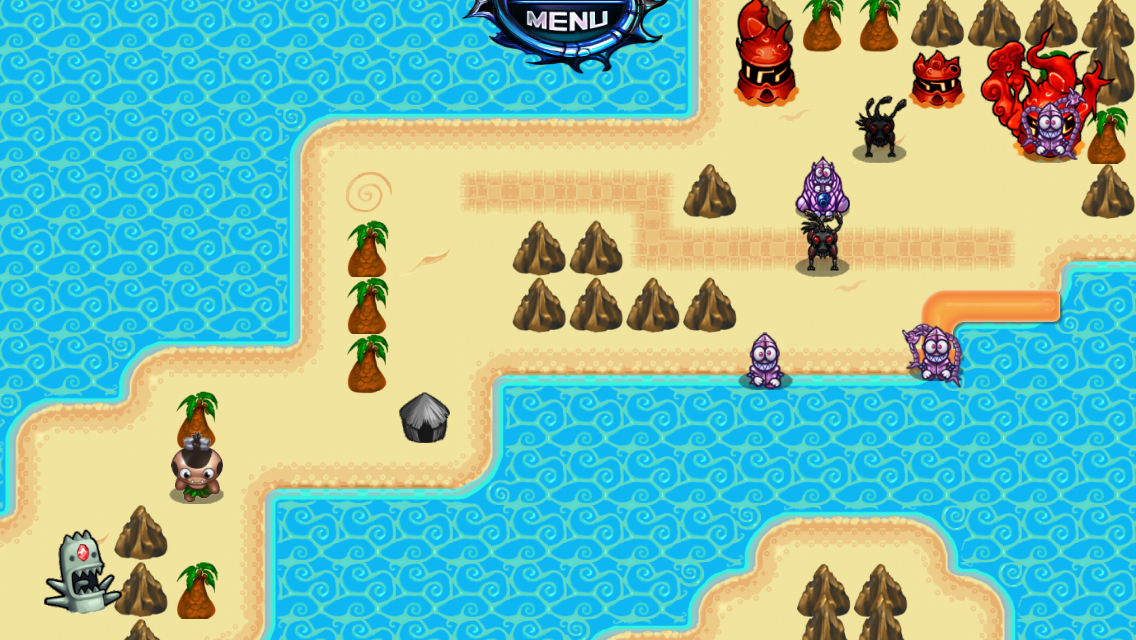 Although the opposing forces look completely different from each other, each side has access to exactly the same units at the same costs. From the first real mission onward, you can build anything you want in a factory provided you have the cash available. As such, most of the game’s increase in complexity and challenge comes from the position you occupy at the start of the map. Early on, your side will be placed such that all you really have to do to win is pinch, so to speak. As you work your way through, those favors will turn against you, forcing you to play boldly yet carefully to secure territory. The multiplayer maps are, for obvious reasons, more balanced in their placements. There are several to choose from, offering a nice selection of scenarios to enjoy. Some place more importance on your marine units, while others have long, narrow bridges that serve as choke points for whoever manages to lock them down quickly enough. I had some trouble finding other players in the online mode, but I imagine that situation will improve as the game launches on additional platforms.

It’s all fun enough to play, and you can certainly sink a lot of time into it if you get into the swing. The maps are well-designed, and if you can find someone to play multiplayer with, you’ll get plenty of thrills. Taken as a single-player experience, I’m not sure if it’s going to be for everyone. There’s only one difficulty setting, and I suspect it’s too easy for most experienced strategy fans, while perhaps being a little too hard for newcomers lured in by the Pocket God name. The rock-scissors-paper way units interact with each other works well enough, and the varying types of terrain puts at least one additional layer of consideration onto things, but it often seems to be for naught. Don’t send scissors after rock, and if scissors must fight scissors, make sure you have the terrain advantage. Park a shark in the right position with someone to watch its back, and you can make short work of just about any enemy. The deployment limits are a good idea, but they’re not balanced out well with your cash flow. You’ll probably have excess cash after the first few turns, and unless things go very badly for you, you’ll never look back. If you don’t keep infantry handy and healthy, it can sometimes be a long, slow trek across the map from your nearest factory. 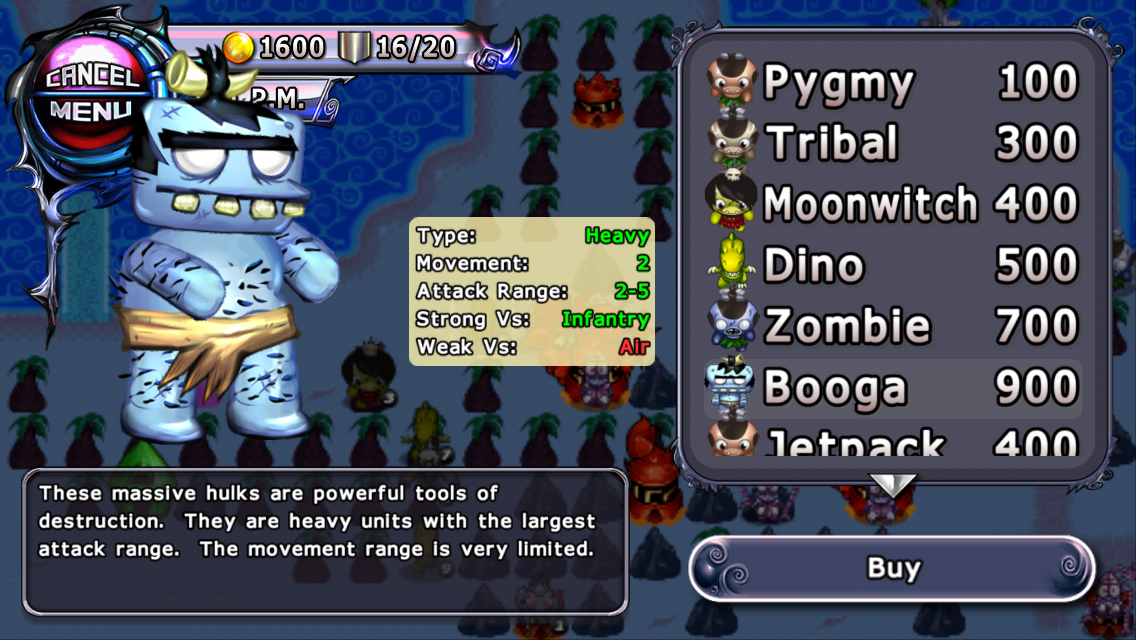 Advance Wars offered answers to all of these situations, answers not present in Pocket God Vs Desert Ashes. That was fine six years ago when Mecho Wars launched, because there honestly wasn’t a lot of competition at the time. To see nothing in the mechanics changed or bettered with that much water under the bridge is a little disappointing, in my opinion. For Mecho Wars fans, especially those who may have lost the original game over time, this is an easy buy, as it’s nothing more or less than another giant scoop of that game. Additionally, if you’re looking for a game similar to Advance Wars in design and accessibility, Pocket God Vs Desert Ashes is one of the best choices around. It holds up its end in both single-player and multiplayer, when most other options drop the ball on one or the other. And hey, since it’s published by Bolt Creative, it might even stick around the App Store this time, unlike the previous two releases of its predecessor.

Even considering Mecho Wars‘ faults, there was a gap left in the App Store when it departed. Pocket God Vs Desert Ashes happens to be of the exact same measurements, filling that gap nicely. It’s a lot of fun to play with friends, and it’s a good choice if you’re looking for an accessible entry into the strategy genre. I also really like the odd art style that Nine Tails Digital uses in their games. The lack of difficulty options in single-player hurt that side of the experience a lot, and I really do wish there was at least an attempt at advancing the mechanics or adopting some of Pocket God‘s DNA past a visual theme. It’s unfortunate that a crossover that seemed so odd when it was announced ended up being so very ordinary.