A few days ago, I wrote a story about how Collectible Card Games are flourishing on mobile devices, with Hearthstone, of course, leading the way. If you haven’t read the article, a new report from SuperData Research stated that the portability and popularity of mobile devices have created an excellent environment for digital CCGs. Why have I started a review of Dropforge Games‘ Loot & Legends (Free), which from its screenshots looks like a table-top board game, with a discussion about CCGs? Well, maybe the name of Loot & Legends‘ PC predecessor might give you a clue: Card Hunter, Blue Manchu’s 2013 hit that cleverly put a table-top board game of old and a CCG into a blender and out came a game that cleverly injected a deck-building component into your RPG. Loot & Legends continues that tradition, producing a fun digital table-top experience that has CCG mechanics at its core.

When I wrote a preview of the game a few months back, I talked about the differences between Card Hunter and Loot & Legends, so go read that article if you want to know more about those differences. In this review, I’m going to focus on Loot & Legends and how Dropforge Games has managed to deliver a very entertaining game that could take advantage of the upsurge in popularity of CCG games. While the game has a few issues and a couple of questionable decisions, overall Loot & Legends delivers on its promises and provides hours of entertainment, especially for those who love gathering crazy amounts of loot. 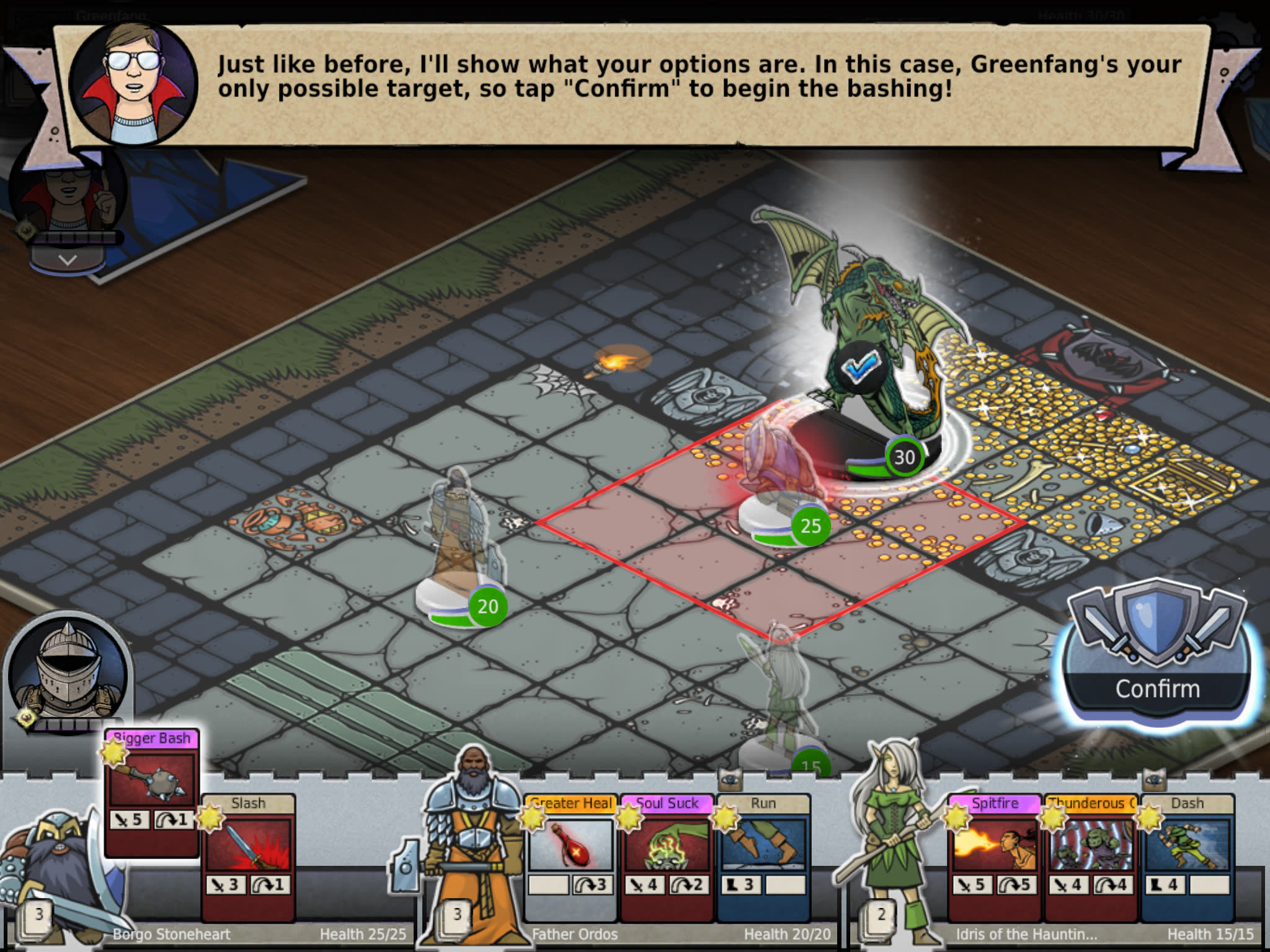 First, though, let me explain how the game works. You lead a group of up to three characters, a Dwarf Warrior, an Elf Wizard, and a Human Priest, through successive dungeons where you fight against a range of enemies, all the while gaining all kinds of weapons, staffs, armor, and so on. You fight across a linear map with challenges of increasing difficulty and nuance. When your team enters a dungeon or a map location, it encounters a number of enemies, sometimes one or two, sometimes many more, and each member of your team use his or her cards to move around the map, attack opponents, cast or counter spells, and so on. In Loot & Legends you can’t just move your warrior around the map in an attempt to get closer to that Dragon looming at the center of the dungeon; instead, you have to use the move/run/dash (and so on) cards in your deck to move the designated amount of spaces. The game plays, as expected, in a turn-based fashion, and once your hand is empty or you simply don’t want to play any other cards, you can pass your turn; once the other side passes too, another turn begins, you draw more cards, and so on until either you perish, either they perish, or you fulfill a map’s goal (such as standing in a specific part of the map for a number of turns). 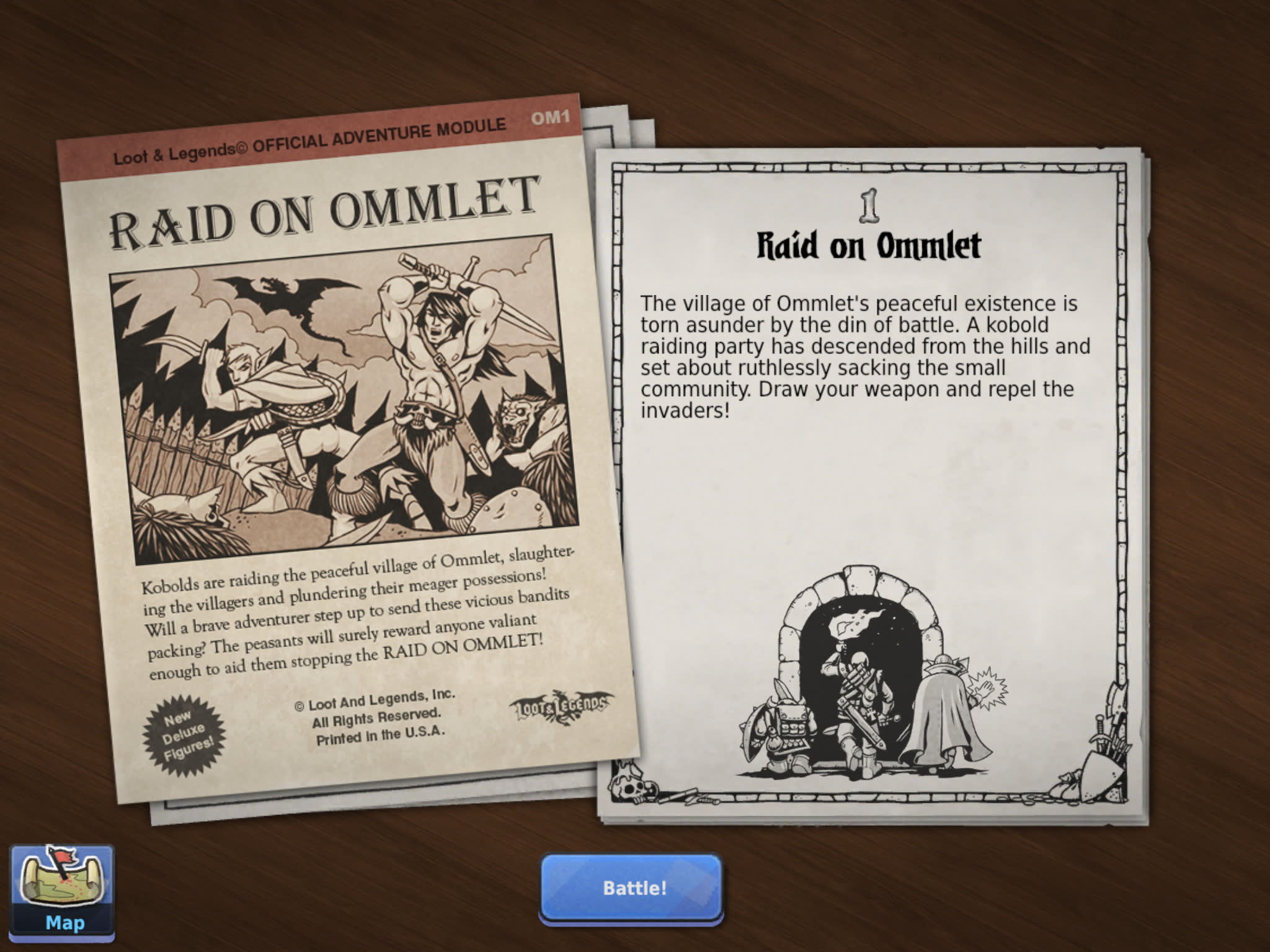 In a way, then, the game has rather simple rules; you fight, gain loot, equip better loot, fight stronger enemies, gain better loot, and so on. However, the CCG aspect of the game nicely complicates this simple flow by turning each piece of equipment into a number of cards, and when you pick an axe for instance, you get all the cards that comprise that axe. Very rarely do you find “perfect" pieces of equipment whose cards fit perfectly into your playstyle; instead, you have to make compromises, which give the game part of its strategic appeal. For instance, you might find a pickaxe that gives you the ability to pull enemies closer to you, but with those three Hook cards come two other cards whose attack value increase by two for each enemy adjacent to the enemy you originally attacked. Now, both of those types of cards can be great, but they don’t necessarily work well together (although in some instances, they do). 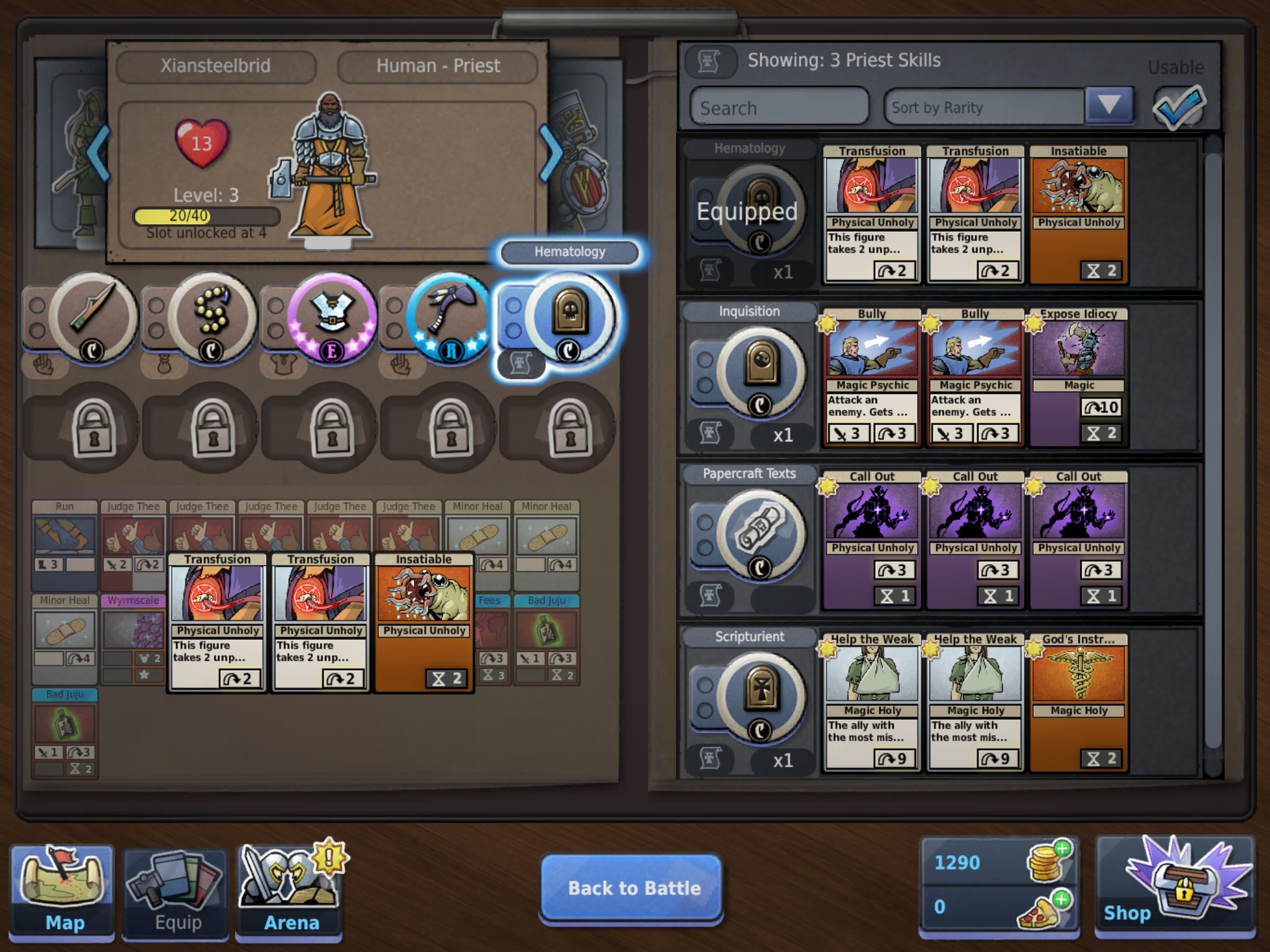 This aspect of deck-building makes Loot & Legends stand out among most other similar dungeon crawlers because CCGs have relatively different strategies than RPGs. You have to figure out how many move cards you want to have in your deck (they don’t all come from equipping boots, they can also be found in other pieces of equipment or armor), you have to build your deck according to the opponent’s deck, which means not simply adding the right weapon for the right kind of enemy but also figuring out what kind of cards you’ll need to counter the enemy’s cards. This complex dance of constantly fiddling with your deck has led to some players complaining about weird difficulty spikes; however, those spikes mostly arise when players don’t realize that the equipment with the highest rarity doesn’t always translate into better equipment in this game. 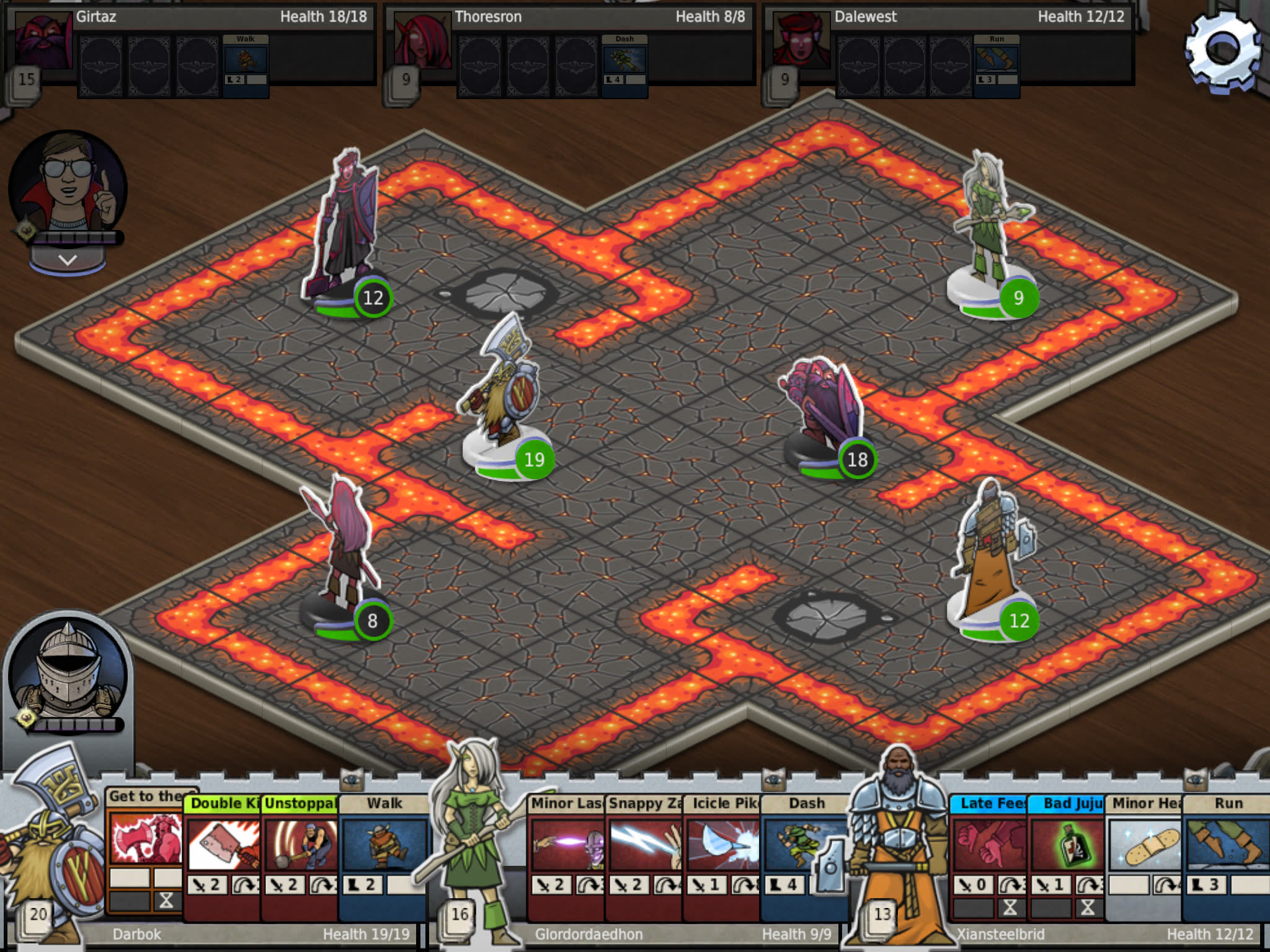 Instead, you sometimes might need to equip “weaker" equipment simply because the cards that come with a common weapon synergize better with other pieces of your equipment or counter your opponent’s cards better. The game encourages constant experimentation by design, however, I found that it does so silently; I feel that this principle should have been made clearer to players early in the game so they could understand that they’ll need to tamper with their decks often if they are to defeat the enemies. Another important piece of information that I found missing from the game was information about the terrain. The maps include terrain that might block movement but not line of sight or terrain that might block both, and I often found it hard to know which is which. I would have liked to have more information regarding the terrain because in a game where positioning is crucial, you shouldn’t be moving and hoping the position you are in will allow you to cast that spell you planned. 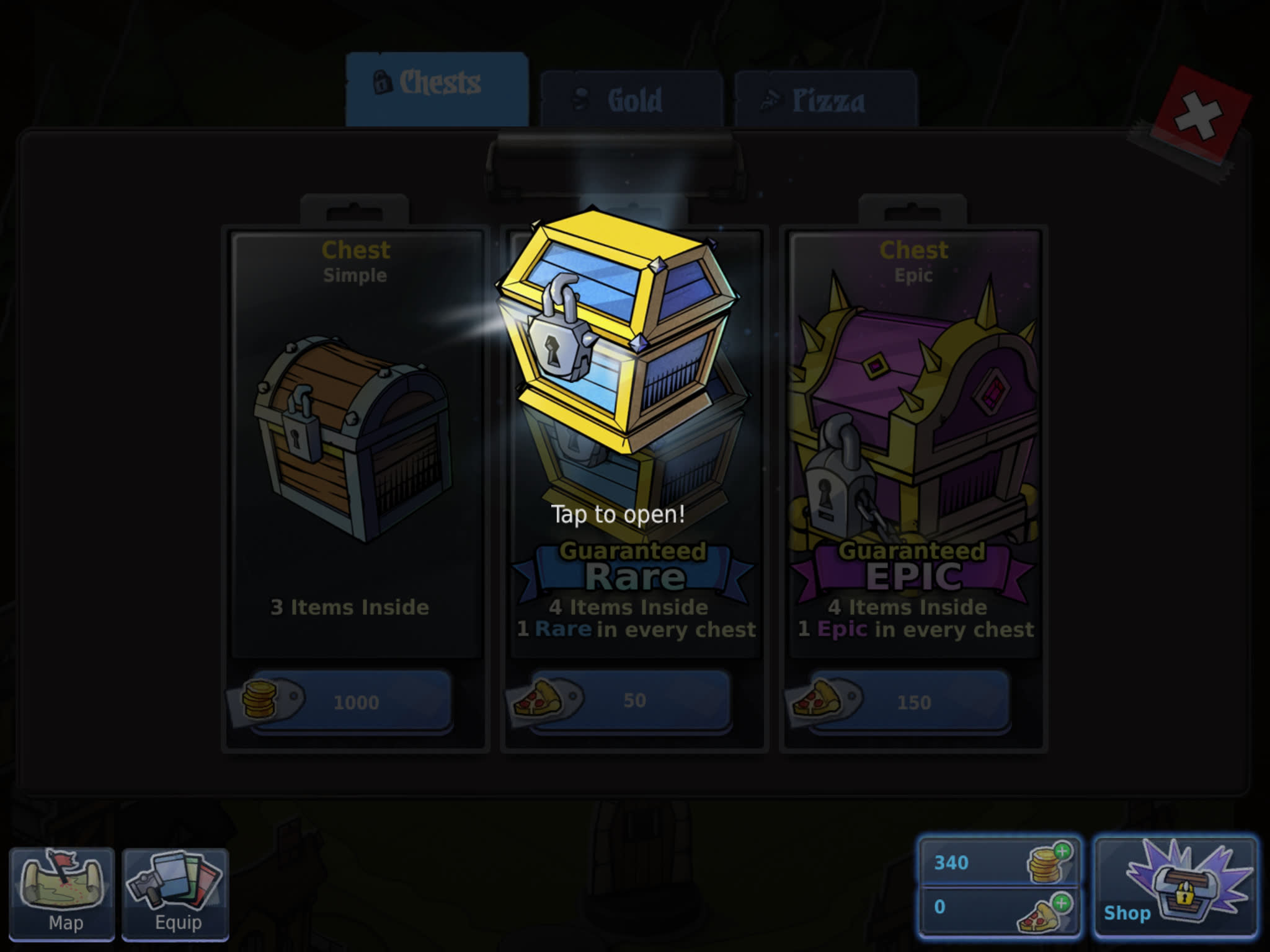 Surprisingly, despite the great number of little pieces that make up Loot & Legends, the UI is very well designed, clear and precise while still retaining the tactility of a board game. While there’s plenty of dragging cards around, Dropforge Games cleverly chose to allow you to occasionally tap rather than drag; for instance, you switch equipment simply by tapping on the weapon you want to use rather than having to drag it across the screen. Also, when you want to examine cards, you simply tap and hold the card and it pops up in your view, and this mechanic works flawlessly. All the moves in-battle have to be confirmed, which reduces any chance of mistaps. What I do wish was for the ability to zoom out a bit so I can see the board better, and perhaps even the ability to rotate, although not having that ability was never really an issue in terms of figuring out the positioning of all the characters on the board. 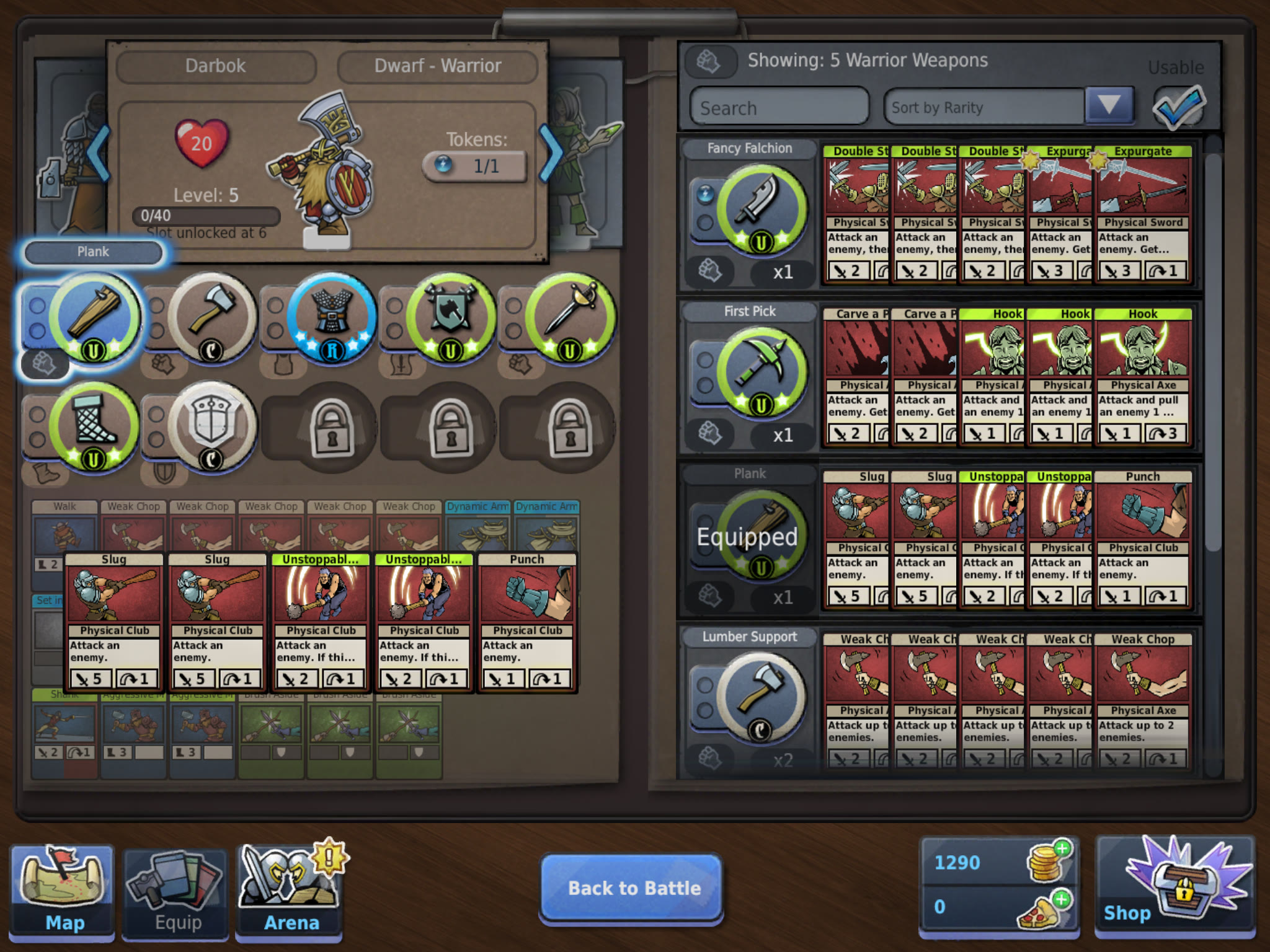 When it comes to all the loot that the game’s named after, each of your heroes comes with ten equipment slots that progressively become available as the characters level up. In relatively-traditional RPG fashion, there are slots for weapons, shields, boots, armor, skills, and so on. As you get better loot, you also find equipment that requires Tokens to work, adding another layer of decision-making to the mix. You get equipment from beating the various battles and also from buying chests either with in-game coins or with Pizza, the game’s IAP currency. There’s also the ability to be a “Club Member" for a day or a week, which you buy by using Pizza or you get as an Arena reward, that gives you better equipment after each battle (in this way the Club Membership is a lot like World of Tanks: Blitz Premium account). 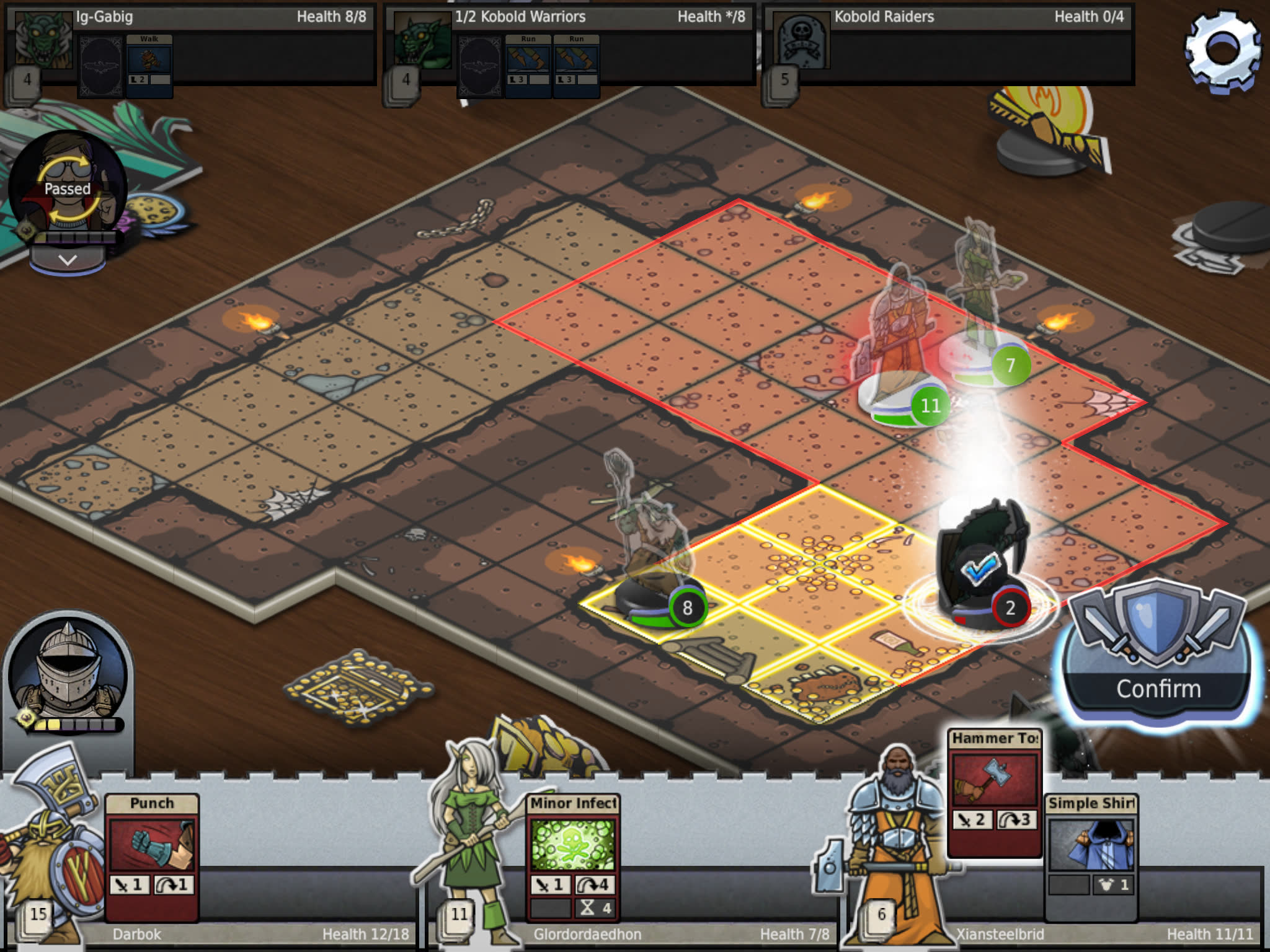 I’ve seen some complaints in the forums that the timed nature of the Club Membership doesn’t fit well with the game’s mobile nature, and I have to agree. Having your membership slowly tick away while you sleep feels wrong in a way; you might even plan to spend the whole day making the most out of your membership only to lose the opportunity for better loot because of one reason or another. Perhaps the developers should have metered the membership in another way. The positive, though, is that the game contains no energy meters to stop you from playing when you want to, and the rewards seem plentiful enough that if you spend the time strategizing and building your deck correctly, you shouldn’t feel that you hit a pay-wall. 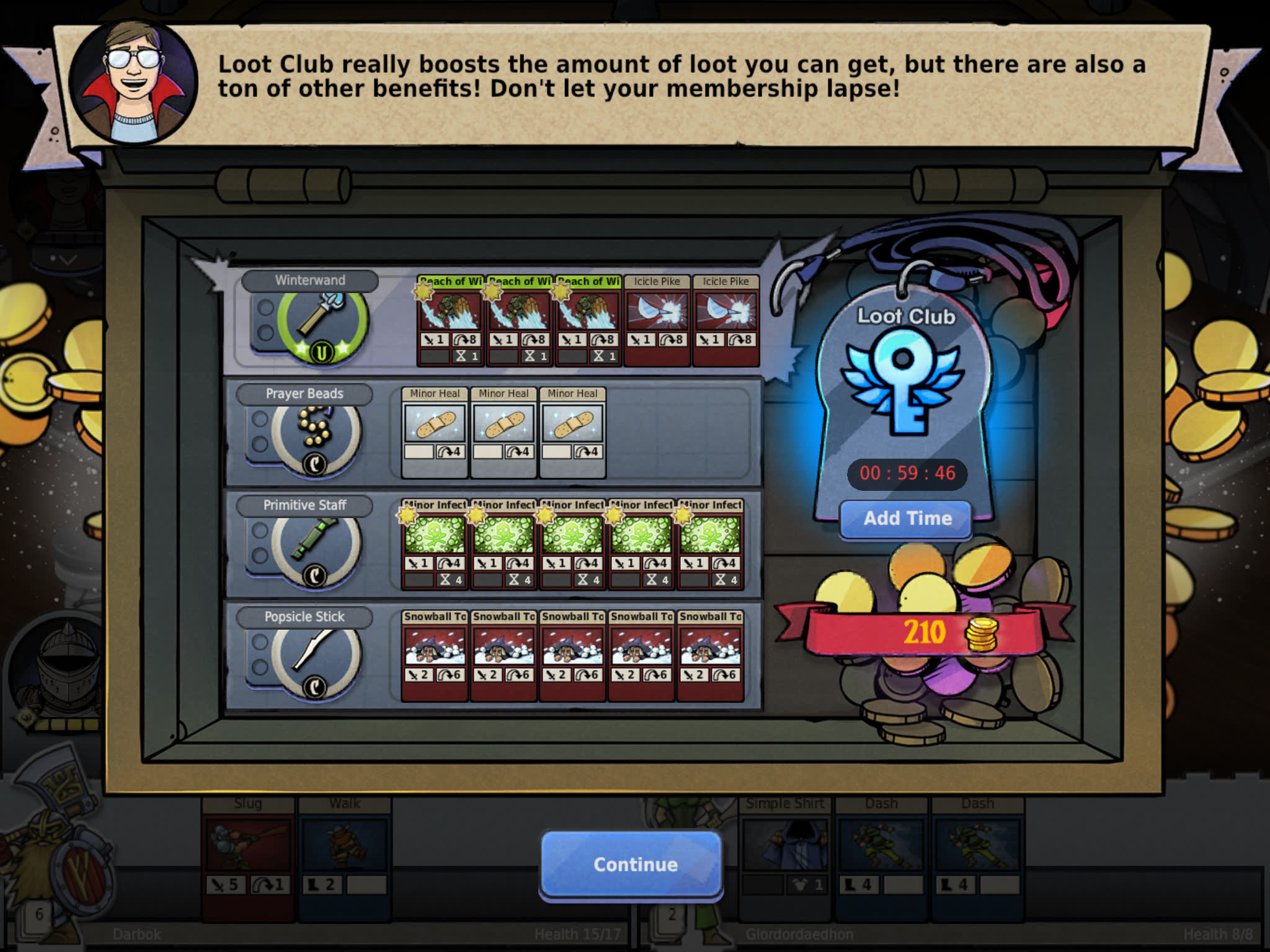 The equipment, characters, and the boards are all drawn as faithful representations of their cardboard brethren, giving the game an art-style that, much like Card Hunter, makes it stick out among most of the competition. That goes for the cards too, whose art might be on the relatively stark side but are pretty nevertheless. The whole art style fits well with the fiction of the game since Loot & Legends goes the “meta" route by having you pretend to be an actual human player playing with a novice, and clumsy, gamemaster called Gary. This notion of you as a player playing a player playing the game helps the game break out of what is usually a very dry procession of dungeon after dungeon. Instead, your journey through Lootlandia (the universe you are playing in according to Gary) is quite humorous because of your GM’s incompetence. However, I wish Dropforge Games hadn’t gone with the “Gary is so nerdy" jokes to the degree it does; I think culturally we’ve moved beyond the “that nerdy guy can’t even verbalize anything meaningful when he sees girls," no matter how that story ends. 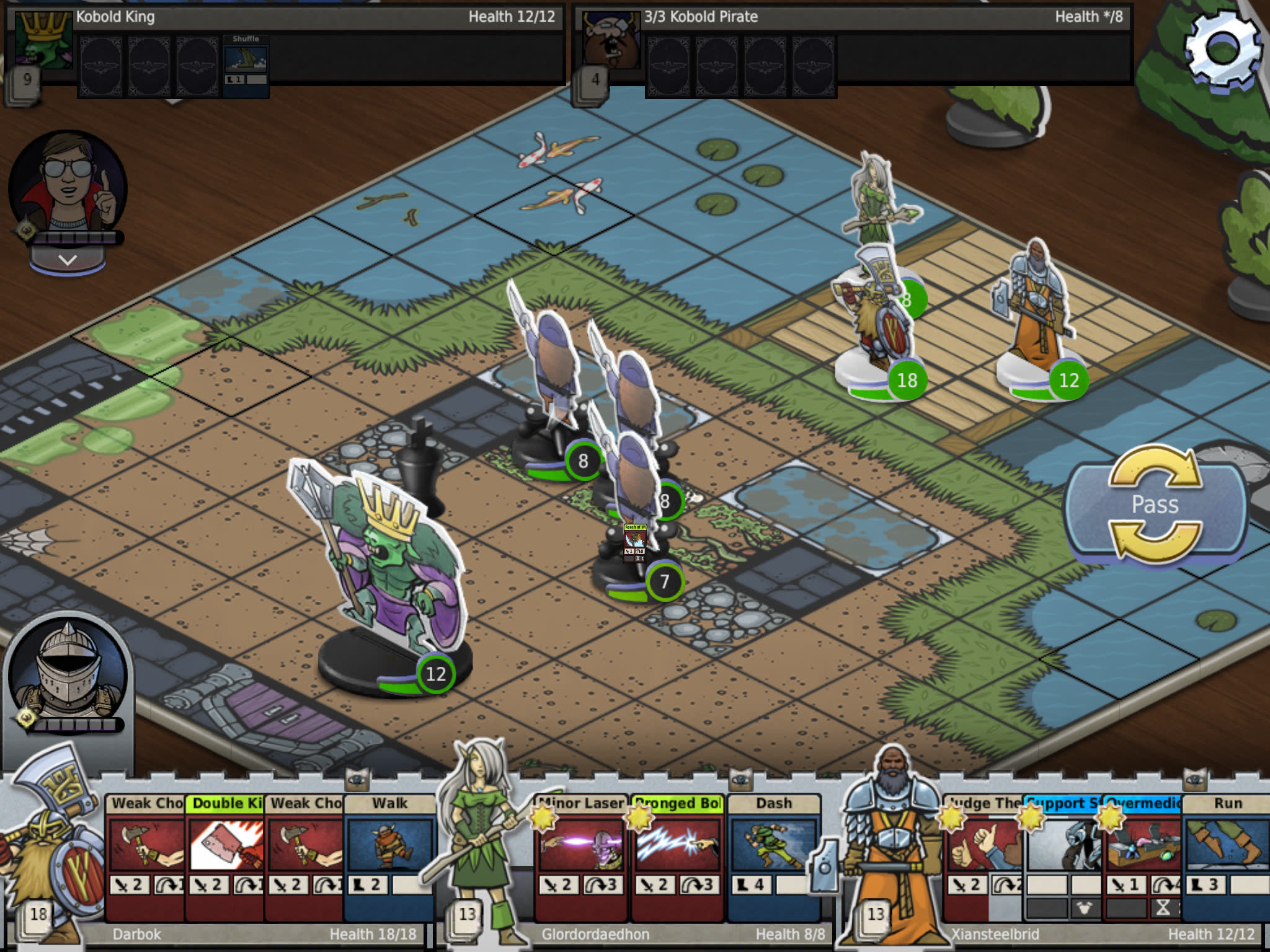 In terms of content, the game offers plenty of dungeons and other locations to tackle, an obscene amount of loot to collect, and the Arena mode, a PvE mode that adds “endless content" according to the developers. Arena has ten unique boards and sets you against AI-controlled 3-hero teams roughly similar to your own team. After each win, you get gold and points (and XP in the future according to the developers), and as you get more points, you claim higher rewards. Arena is the only mode where you can earn Pizza, and the final reward will always be a new Legendary item. The Arena costs gold to enter, but you also get free plays every few hours. This mode is entertaining, and it does offer additional content on top of the Campaign. Whether it will be enough for a player who’s already completed the campaign, I’m not sure, especially since you can’t play Arena continuously. 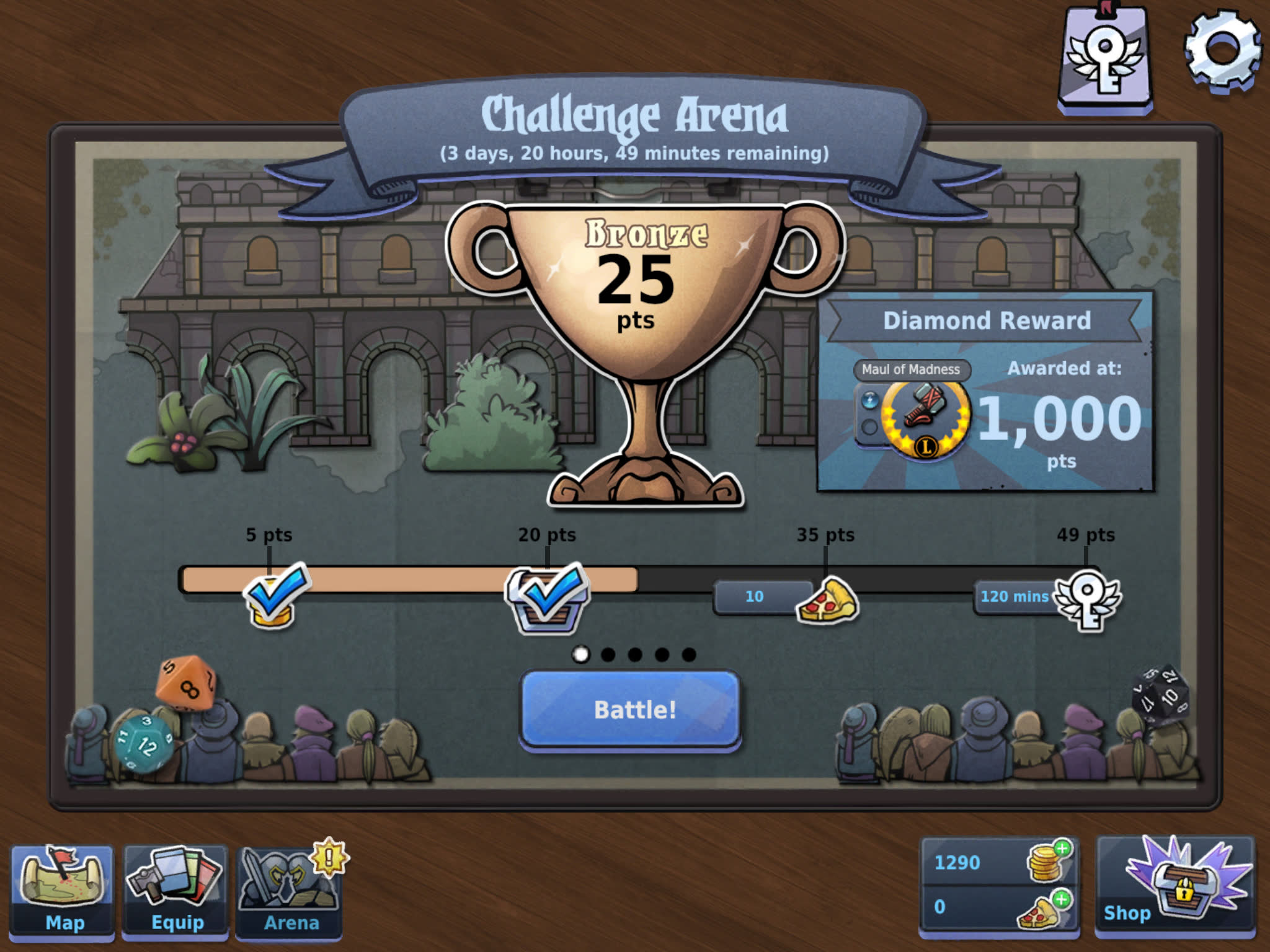 Overall, I like Loot & Legends. It feels like the perfect fit for a tablet and feels well designed and quite polished. I know that some in the forums have encountered numerous crashes, but I’ve been playing the game constantly on an iPad Air and iPad Air 2 (including streaming it on Mobcrush for more than an hour) and haven’t had a crash yet. The game does have its issues, including the lack of terrain information and the slightly unfair Club Membership, but overall I found it a relatively fair F2P game. The developers are hoping to add a multiplayer mode in the future, which would indeed be a great addition, and a crafting mode for your many, many extra cards. If you enjoy CCGs and RPGs, I think you’ll get many hours of entertainment traveling and battling in Loot & Legends’ silly, funny universe.