As you might have guessed from all my articles on Hearthstone, I really enjoy Collectible Card Games (CCGs). Military games are one of my passions, and it’s not a great leap to go from enjoying those games to enjoying CCGs since good CCGs are, after all, all about strategies and tactics. iOS developers apparently know, and cater, to my personal tastes in games because they’ve been adding CCG mechanics into all kinds of other genres (I’m looking at you, Tekken Card Tournament). If your game has CCG mechanics as an essential part of its design, I’ll probably be playing it, at least briefly. So, I was quite interested when I heard that Dropforge Games would be porting Card Hunter, Blue Manchu’s hit and winner of Most Original PC game of 2013, to the iPad under the name Loot & Legends. Card Hunter cleverly injected a deck-building component into an otherwise-traditional RPG game and provided players with the opportunity to create their own card-based hero parties that went on to play through many campaigns created by the novice gamemaster, Gary. 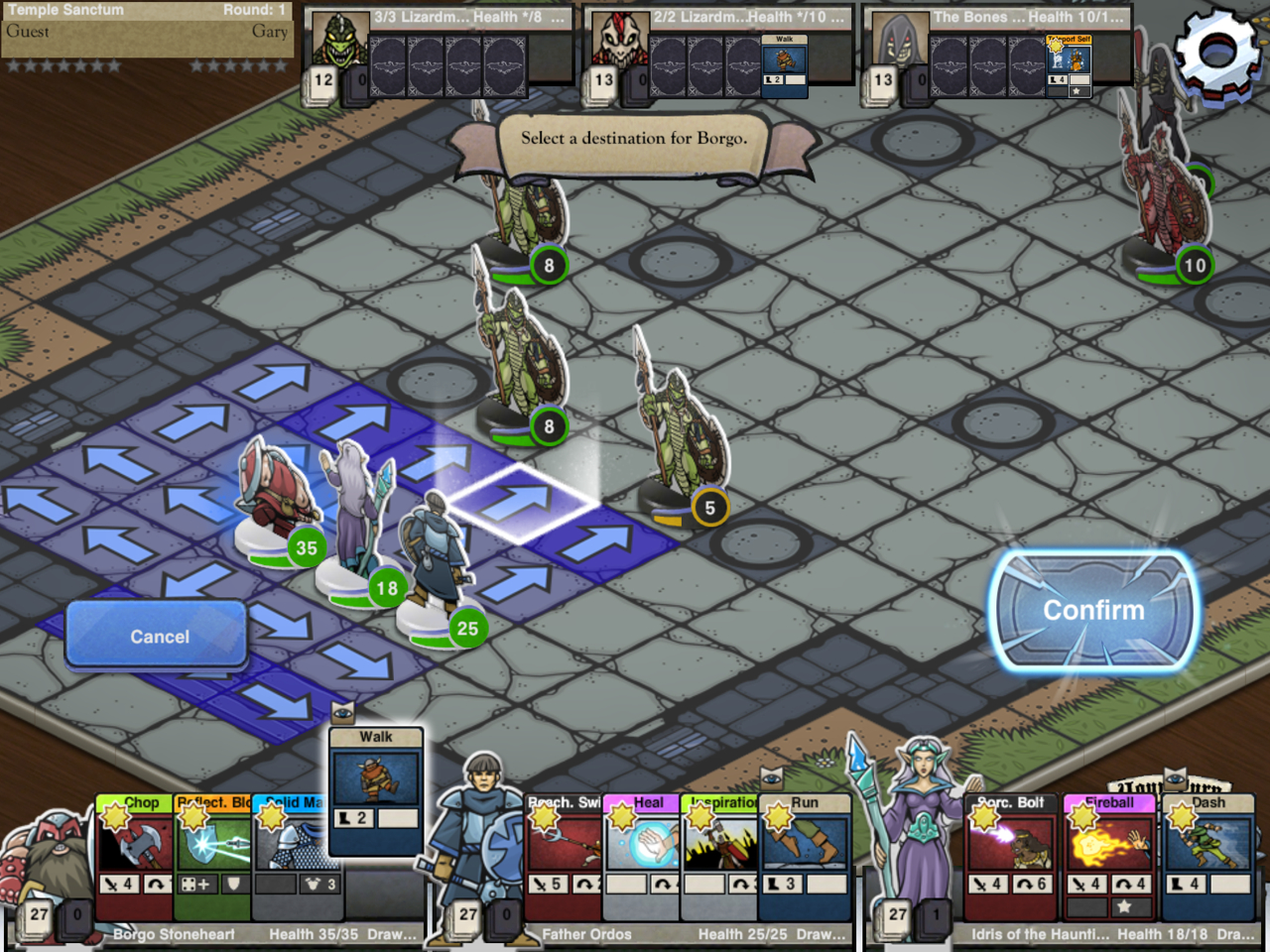 In order to understand Loot & Legends‘s design and gameplay, you first need to know a few things about its predecessor. In Card Hunter, the player leads a group of up to three heroes across many 2D dungeons to battle against numerous hordes and dragons. The game’s innovation is that each piece of equipment heroes carry into the dungeons adds 3 or more cards to that heroes’ deck. So, instead of choosing individual cards to construct a deck, like in most CCGs, in Card Hunter you construct your deck by choosing your equipment, a design choice that adds an interesting twist to the traditional CCG formula. The equipment system forces you to add cards to your decks that you wouldn’t have added otherwise, and that creates fun tactical problems that get you thinking in different ways than if you were playing a straight-up CCG.

Loot & Legends translates many of Card Hunter‘s mechanics and systems to the iPad. Most of the time you’ll be controlling a group of up to three heroes, a Dwarf Warrior, an Elf Wizard, and a Human Priest, and collecting an increasing number of loot (equipment) that offers your heroes different tactical possibilities. For example, by choosing certain pieces of equipment for your heroes, you can have a fire-casting or ice-casting Wizard, a polearm- or axe-wielding Warrior, and a holy or unholy Priest. Each archetype enables specific ways of playing, and each equipment decision you make defines what cards your heroes will carry to battle. 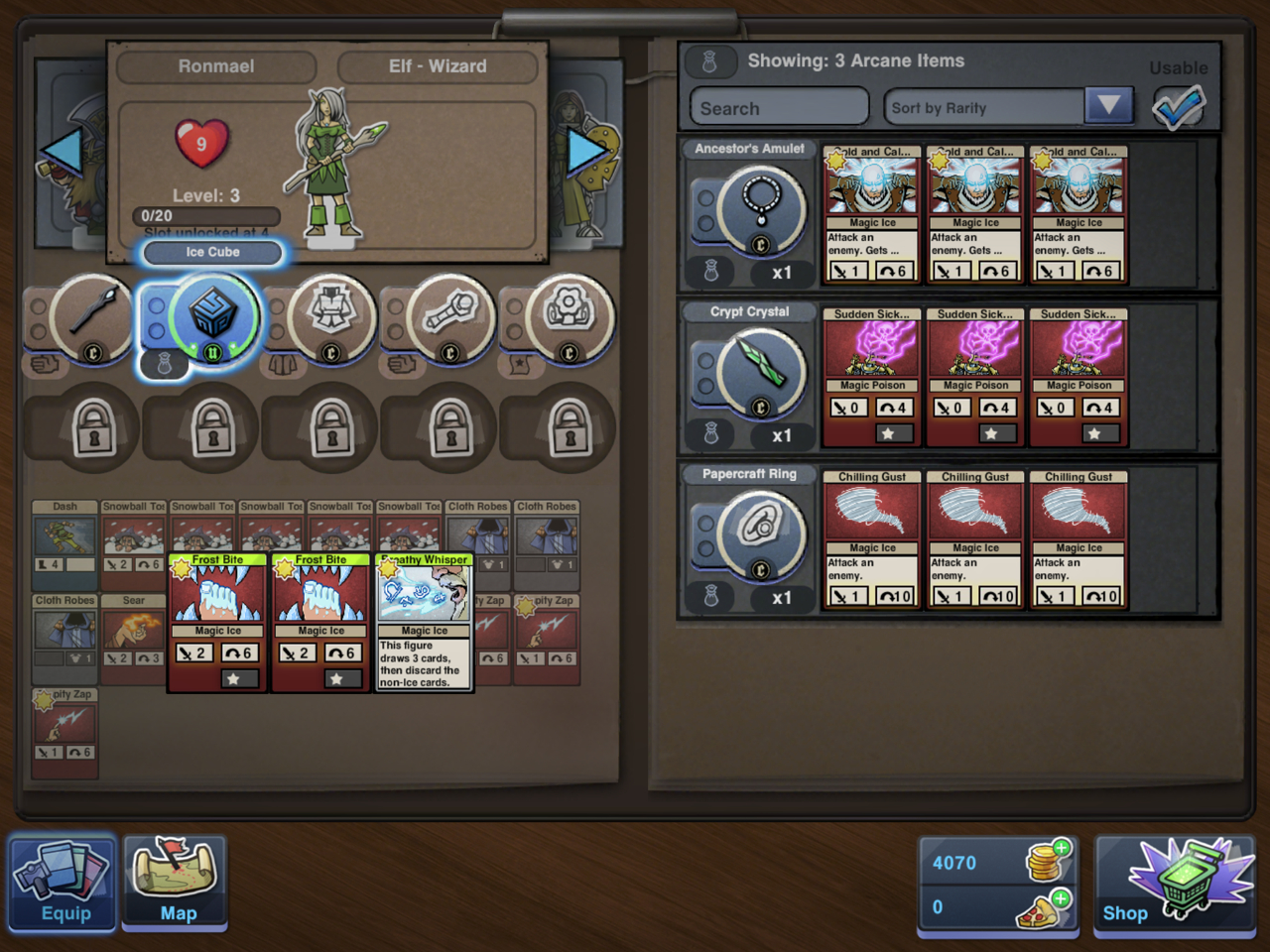 During my time with the game so far, Loot & Legends‘s equipment mechanics feel more coherent than those of its PC ancestor. According to the Dev Diaries of Jonathon Loucks, Loot & Legends’s lead designer, Dropforge Games has been rethinking the way equipment should work in the game, with Loot & Legends preferring a more equipment-based design (creating equipment first and its cards later) rather than the card-based design of Card Hunter (creating and balancing cards first and then building equipment with them). By the way, if you are even remotely interested in game design, you should definitely read these Dev Diaries as they give you a great insight into the way game designers think about game mechanics and how they solve various issues that pop up during game design.

I think I’m going to like Loot & Legends‘s equipment system better than Card Hunter‘s, and keep in mind that I really liked Card Hunter. The CCG elements of Loot & Legends‘s design seem to be more prevalent in the iPad iteration of the system. It is, of course, early to say whether the re-design will be successful because these kind of design choices reverberate throughout a game and, while they can work in the early stages, they might fall apart towards the end when players become more aware of the mechanics. Still, I think these design changes are the right way to go. 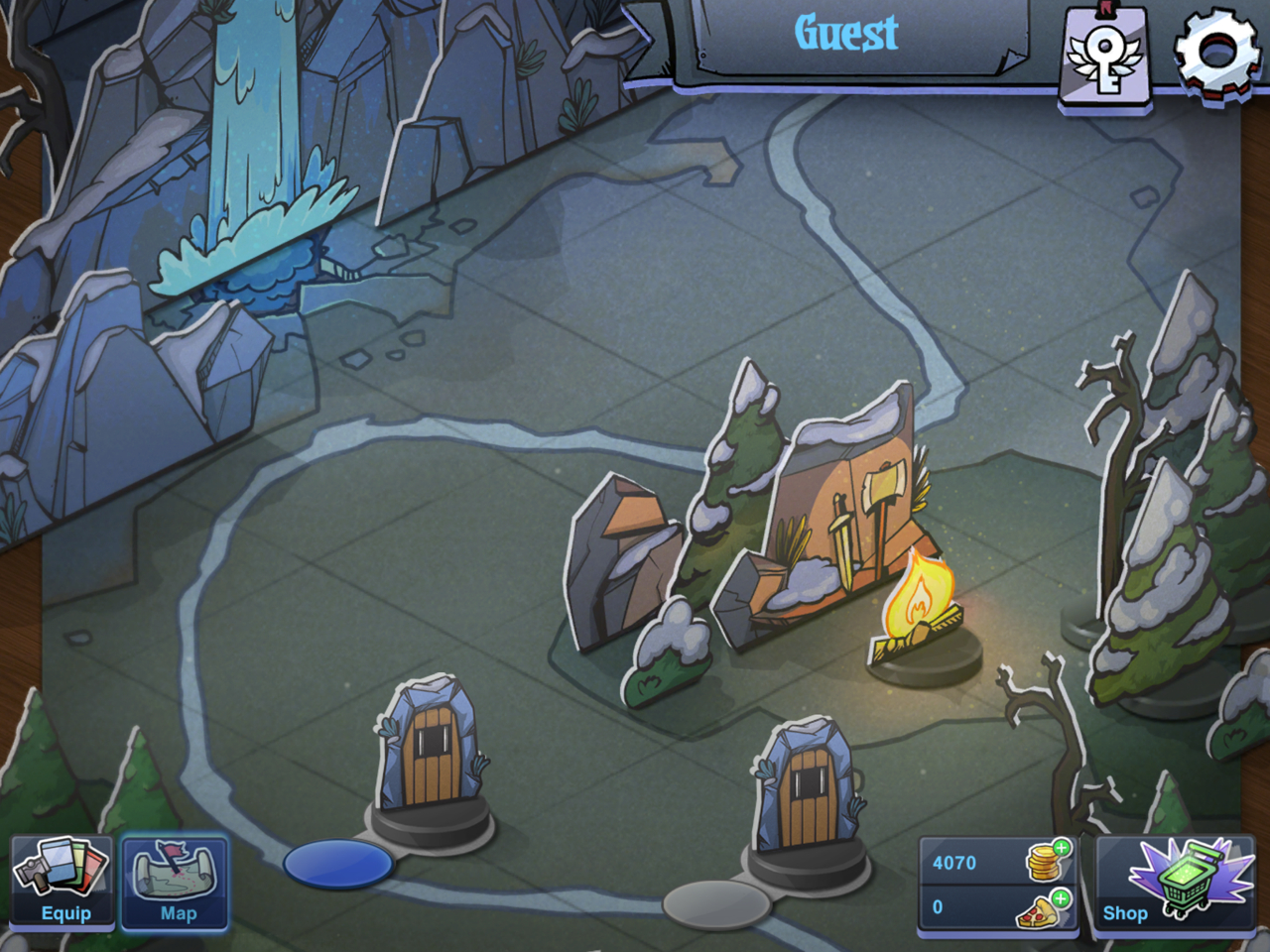 In addition to having an intriguing design, the game is also lovely to look at. As you can see from the images in this article, the game’s art is cleverly designed to make Loot & Legends resemble a board game consisting of 2D cardboard characters played on your friend’s kitchen table. Loot & Legends is once more building upon the foundations of Card Hunter, but the game’s art is not a direct translation of the PC game’s art onto the tablet; rather, it’s a subtle re-imagining, especially when it comes to the game’s map, which by the way is gorgeous in its “cardboardness." The humor that runs throughout the game’s story and characters is also present in the artwork, with enemies often consisting of a 2D character heavily taped onto a chess piece (as I’ve said, Gary the gamemaster is quite…inventive).

The beta I’ve been playing doesn’t include all of the planned features of the complete product, with the crafting system (which the developers haven’t unveiled yet), much of the equipment, and, most notably, the PVP parts of the game missing. The game will be F2P, just like Card Hunter, but I’ve never found Card Hunter‘s monetization system to be a hindrance, and I expect the same experience with Loot & Legends. The game is still in development, but I’m enjoying the direction its going and so do the members of our forums. And I still marvel at the fact that I can sit on a couch and play on my tablet a video game emulating a tabletop game. Marty McFly would’ve been dumbfounded.