The first monster you fight in Doom & Destiny Advanced ($2.99) is a giant poop. Not long after, your characters complain that something has attacked “(GameString not set)", before they run into expies of Hulk Hogan and Macho Man Randy Savage en route to rescuing Princess MacGuffin from alternate universe versions of themselves. One of the characters remarks that he’s very likely to crap his pants. And then everyone dies. Or something. I don’t know. I do know that you soon run into an angry skeleton who laments the loss of his wiener, and a nobleman who disintegrates at the sound of your barbarian’s mighty belch. I think you’ve got the idea by now, friends. Doom & Destiny ($2.99) was a ridiculously over-the-top RPG with surprisingly solid mechanics and an absurd script rendered even more wacky by its… interesting translation. Somehow, its follow-up feels even more extreme in every regard, and I’m not sure if I find it charming or completely idiotic. If the first game was the Bill & Ted of RPGs, this one is the Pauly Shore.

I will immediately mention that this game is considered to be in Early Access by its developer. It doesn’t say that in the App Store, but the game released as an Early Access title a few months ago on Steam, and it’s still classified as such. There are apparently two more phases to go before the game is considered a proper release on Steam, and I’m pretty sure mobile players need to use similar considerations, because man alive, this game is buggy. Crashes, long freezes, corrupted save files, glitchy gameplay systems, you name it. It basically functions, I’ll give it that much. Even if you run into few problems, you’ll likely need to restart the game now and then due to a memory leak that seems to be connected to the background music. Well, that’s how it goes sometimes. 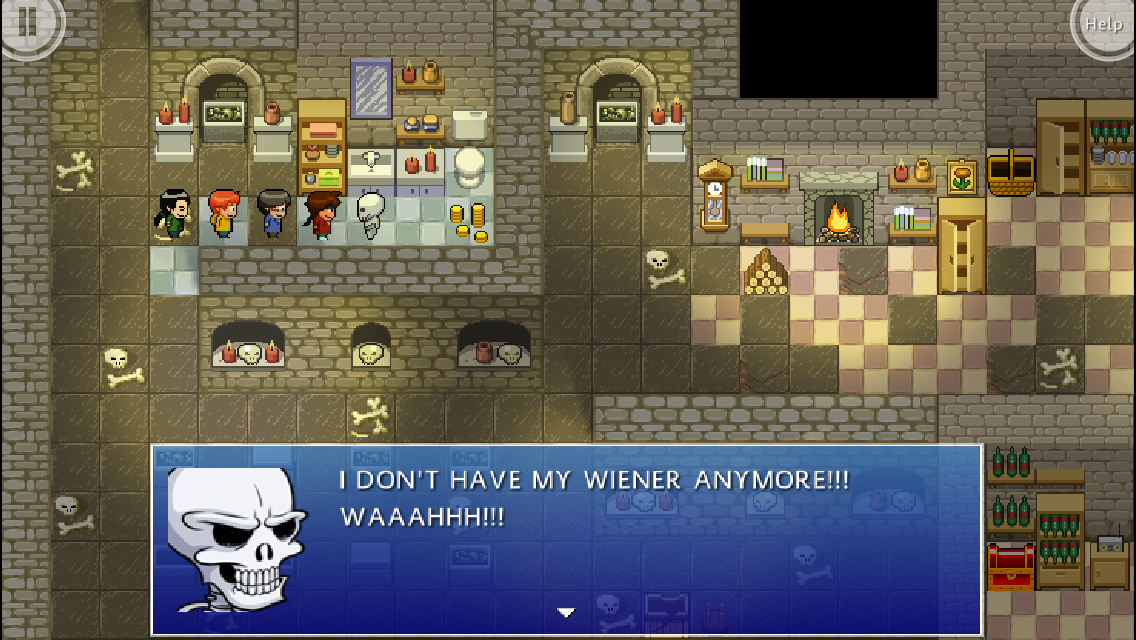 The good news is, provided you don’t run into any serious problems, the underlying game is once again pretty good. You’ll have the same four characters at your disposal, but this time you can unlock new jobs as you go. You can switch jobs at large crystals you’ll find around the world, which also double as checkpoints in case you lose in a fight. The job system is pretty typical of JRPG-like games, which each class having access to particular combat skills. New skills are learned by leveling the job up, which is not a matter of fighting battles but rather spending rare materials you’ll find around the world. In addition to combat skills, each job has at least one map action. For example, the knight can push heavy boulders, the cook can prepare a tasty lunch at a crock pot, and the barbarian can belch, which will offend any upper-class gentlemen who might be blocking your route. There are 15 jobs in total in the current version of the game, and the notes promise more on the way.

As in the original game, there are tons of secrets to find, many of which contain special moves that can be assigned to any character. You’ll also sometimes find rare materials for leveling up jobs in these rooms, so you’ll really want to keep your eyes peeled. You’ll find the odd chest here and there even if you don’t find any secrets. These will often contain new equipment which is automatically attached to the appropriate character, or at least, should be automatically attached. The game sometimes forgets to do it, and since there’s no way to manually change your gear, there’s nothing you can do about that when it happens. You also can’t sell your old gear, but money is fairly plentiful for the most part, so it’s not a huge issue. Cash is just laying around everywhere, along with food, alchemy ingredients, and machinery parts that can be consumed to fire off certain special moves. 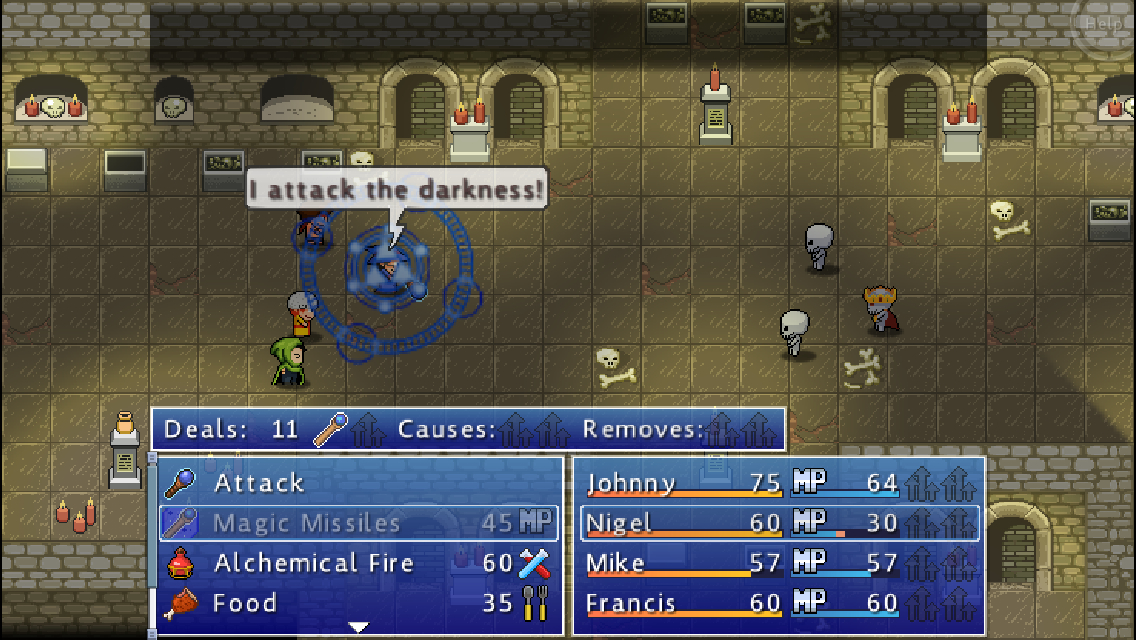 Apart from those changes, the game will be pretty familiar for those who played the original. It’s a riff on classic JRPGs, with random turn-based encounters, dungeons to explore, towns to rest and gear up in, and so on. The story premise once again has four pen and paper role-playing fans heading to their buddy’s house for a night of gaming only to get pulled into a wild fantasy adventure. Kind of. It’s all very complicated this time around, thanks to dimension-hopping antagonist Steel. The opening of the game is a bit too confusing for its own good, and it takes a while before any questions are answered properly, but once the story gets going, it’s actually a reasonably original plot. It’s less of a straight send-up of JRPG tropes this time around and more of a self-parody.

The translation is somehow even worse than the original game. I’m not sure if there’s a single text box that doesn’t have one mistake or another in it. The jokes oscillate between pop culture references and junior high school humor, and they’re virtually non-stop. Doom & Destiny Advanced goes even more over-the-top than its already-silly predecessor, with the script in a seemingly perpetual state of TMI. When you take all of that together, you’ve got quite the recipe for stupidity, and this game’s script is indeed pretty stupid. It’s so stupid, in fact, that it’s almost endearing at times. Other times, well, not so much. For whatever it’s worth, the dialogue of the main characters does ring true apart from the choppy grammar. They sound like four close friends who spend a lot of time playing games together, and each of them has their own role in that sort of mini-clique. But for the serious-minded players out there, consider yourself warned: I didn’t throw that Pauly Shore reference into the review lightly. 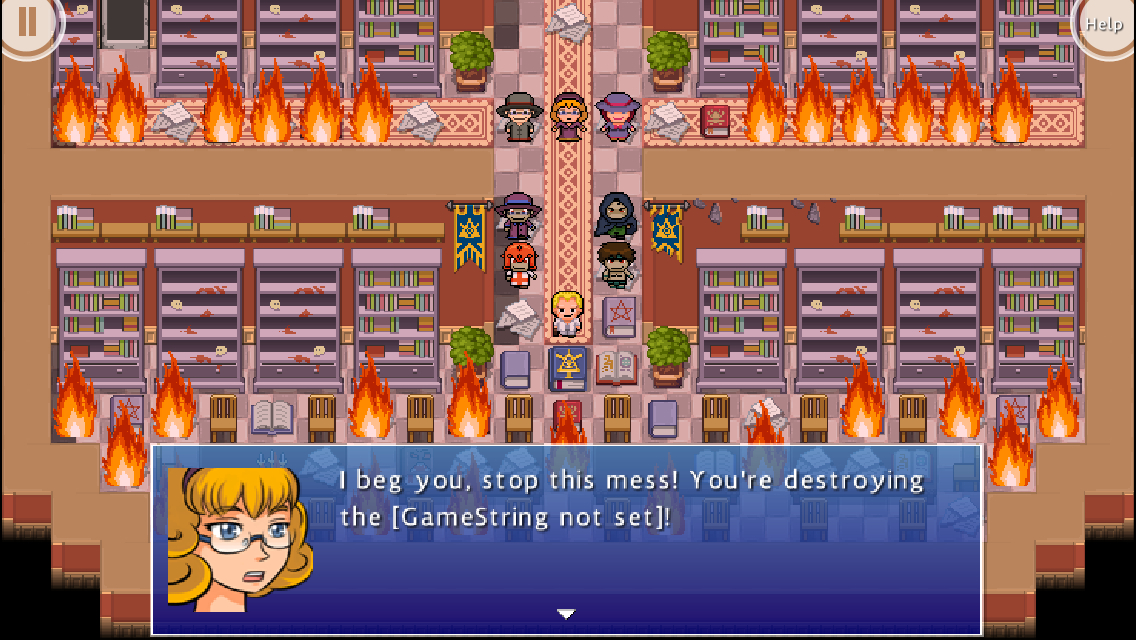 The biggest problems I have with Doom & Destiny Advanced at the moment are its rough state of completion and just how goofy it can get at times. The game is obviously not finished, by the developers’ own admission, but there’s no sign of that on the App Store page. Instead, the bugs and glitches wait as an unpleasant surprise for the buyer. Even your save files aren’t safe, and in an RPG with a single auto-save slot, that’s just about a deal-breaker. As for the humor, there’s a certain nostalgic charm to its juvenile nature, but more sensitive players will probably want to steer well clear, because it’s not afraid to step into language many might find uncomfortable or even downright offensive.

In spite of all that, there’s a really good game at the core of Doom & Destiny Advanced. The encounters are challenging and offer a surprising variety, the dungeons are satisfying to explore with lots of secrets, and the new job system is pretty fun to play around with. I really enjoy the chaotic story, and when the jokes land just right, there are plenty of laughs to be had. The script doesn’t take itself all that seriously, but the gameplay does. That’s my kind of mix, even if I have some quibbles with the specific quantities here. 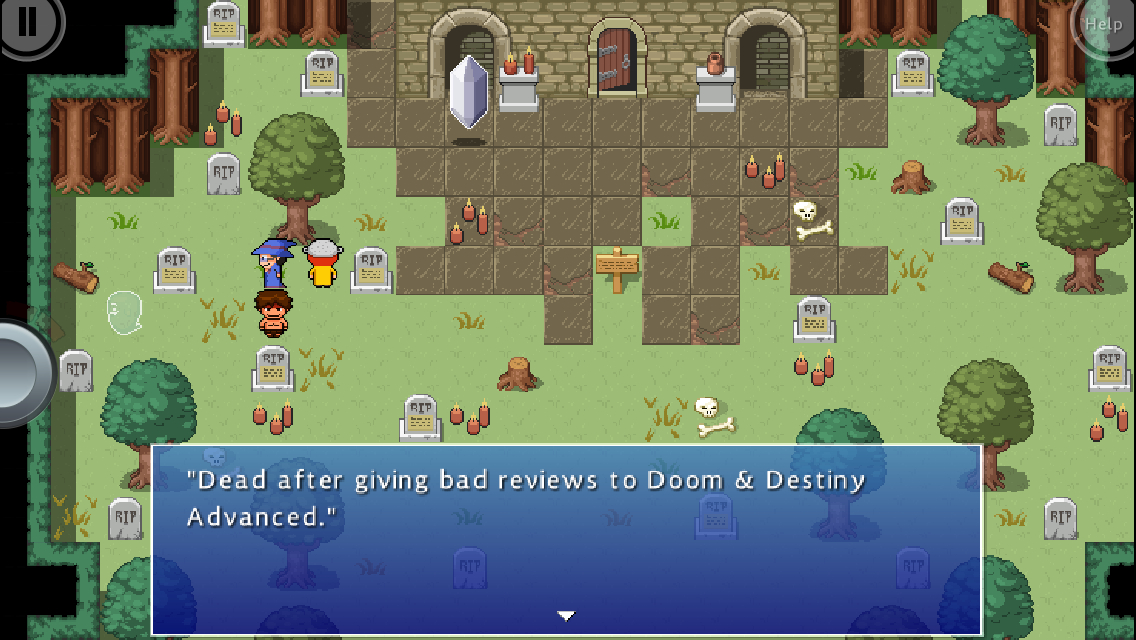 The developers apparently plan to take a similar strategy to games like Wayward Souls here. Updates will be free, but as content is added, the price of the game will go up. As such, if you enjoyed the first game, I’d strongly recommend getting in on Doom & Destiny Advanced even in the rough state that it’s in. It still has a long ways to go, but I’m feeling confident about its chances of being better than the original in the long run. That’s no small achievement, as the original game was a very good RPG behind its goofy mask. It’s hard to say how long it will take to get there, however, which means you’ll need a great deal of patience both to deal with its current issues and to wait for it to get the polish it sorely needs.