The new PikPok and Adult Swim Games title Monsters Ate My Metropolis (Free) is certainly not what you might have expected when you heard a new Monsters Ate My Condo ($0.99) game was in the works, but it makes sense – with that wacky and well-defined universe, why not explore it in other ways? The studios deciding to go with a competitive card game? That was an interesting move. I chatted with Chris Viggers, product manager at PikPok, about the game. 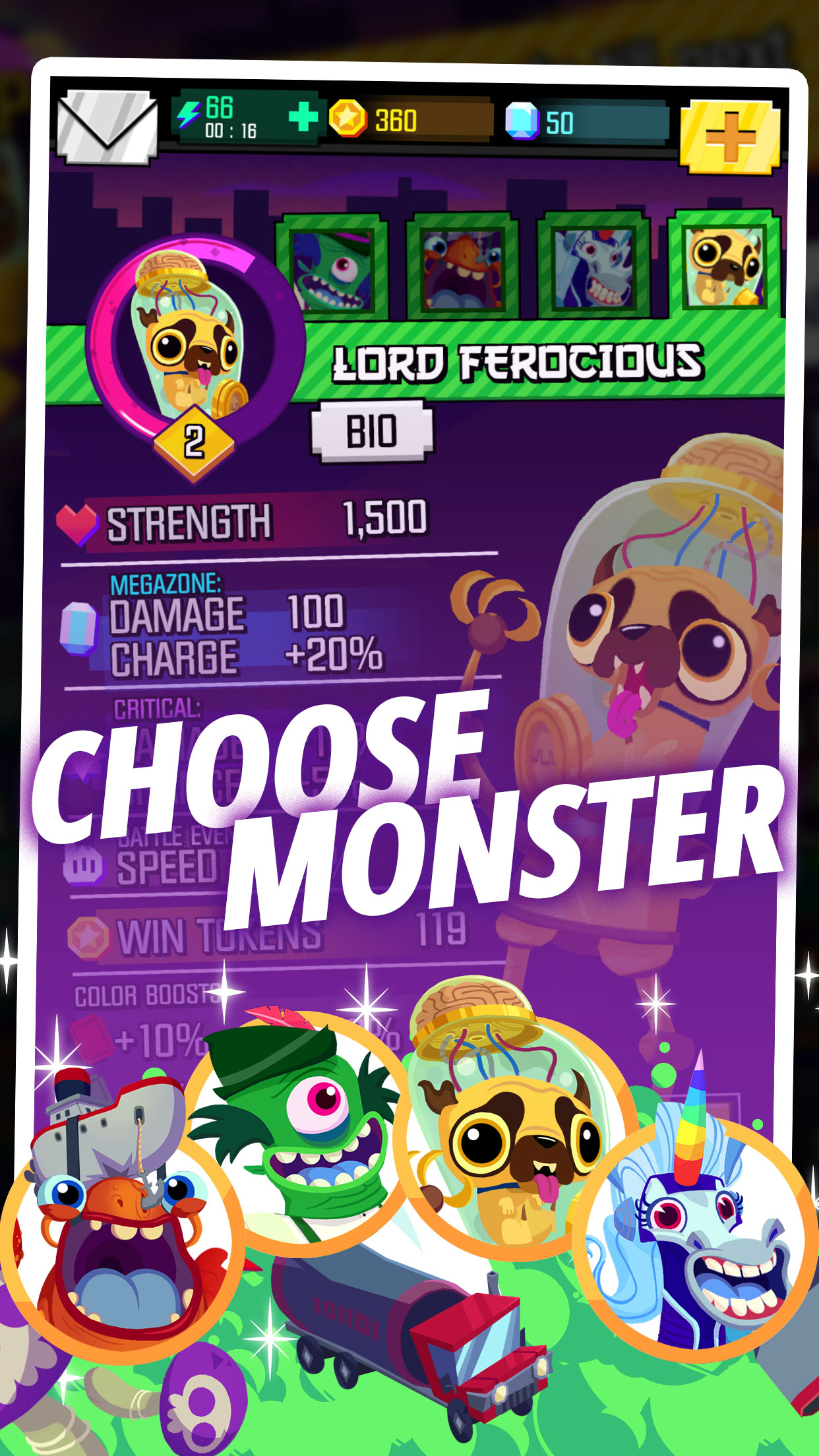 PikPok: We really wanted to do something new and exciting with the Monsters Ate My Condo universe. We love those characters and the zany gameplay and also knew that we have a lot of fans out there who also love the first two games. We wanted to go back to the drawing board on this one and offer something new, for us and for fans, that would capture the cool art and fast paced gameplay, and allow us to really stretch our creativity.

TA: Card games are definitely a genre getting more and more popular, where do you think Monsters Ate My Metropolis fits into the genre? Why should someone play this alongside other card games?

PikPok: Card games are some of our favourite mobile games here at PikPok and we knew that we could combine our experience in developing these games (Rival Stars Basketball (Free)) with the ‘Monsters’ IP and create something that is very different to other card games out there.

A lot of the card games out there already are quite complex and dry experiences, with usually quite a serious tone or fantasy style. Those games are great, but we wanted to offer a more accessible, fast-paced experience in a turn-based card game. This was definitely a challenge!

This is a card game for people who don’t want to spend ages learning new rules or getting into the depths of a hardcore game from the outset. We focused on having fast paced battles, lots of over-the-top effects, outlandish card names and really awesome game changing skills. This is definitely the kind of game you can pick up and play in just a few moments, but you’ll discover new card skills over time that change your experience and how you play. 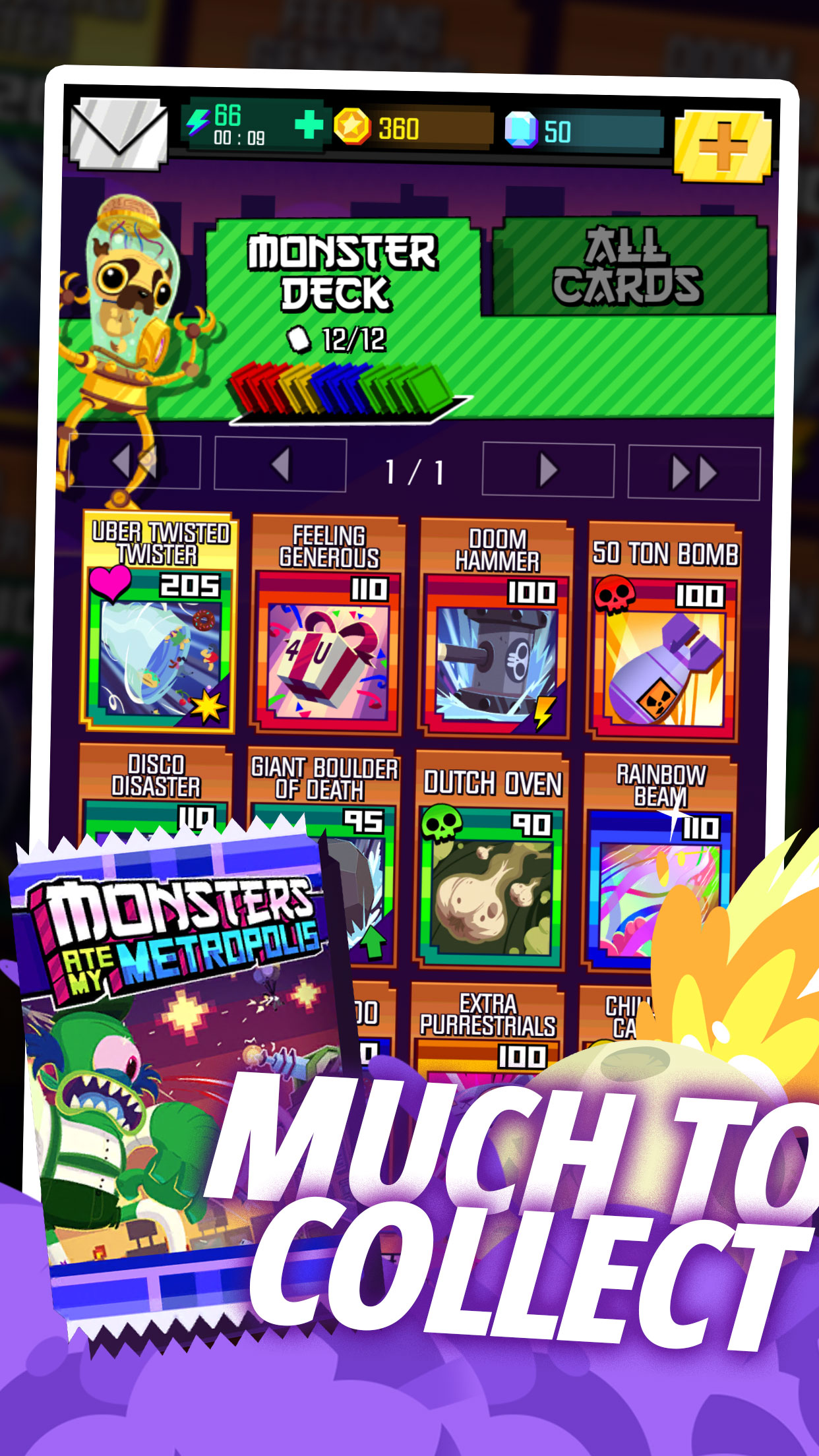 TA: There also seems to be an element of base-building, albeit with the city cards – how did this element come about, and how is it implemented into the game?

PikPok: We wanted to make a competitive multiplayer experience as we all love those styles of games. We definitely did not want the Monsters fighting each other however as they are friends, not enemies. We know that the Monsters love buildings, so it made sense for the player to be the mayor of their city, using their monster to attack other cities and steal their population to become more popular.

We have two distinct card decks in the game, one that is used for your monster to attack with and one that is used for your city to defend with. Even though there is still some crossover of card skills within these two decks, we wanted to have a clear distinction for the player as you don’t always want the same card skills for attack as you do for defence, and we did not want players having to modify their decks all the time.

You can set up your city (defence) deck separately and then see via a battle report how other players fared when they attacked your city and then make adjustments from there, without compromising the cool cards that you have collected for your monster (attack) deck.

We also have specific defence cards skills like Stealth (where the card is not revealed until it is played) and provoke (which makes your battle event super quick) that add to the tension and flow of the battles. 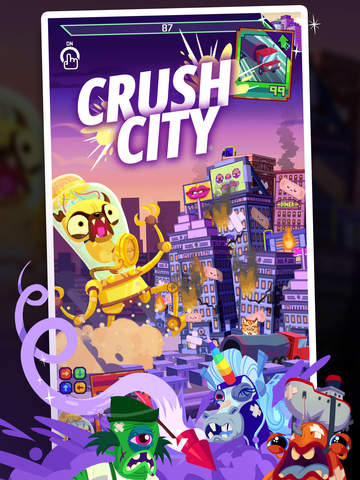 TA: There’s an interesting back-and-forth strategy with the elemental chain and the “Who goes first" aspect, how did this come about?

PikPok: We went through a lot of prototypes and iteration early on, as getting a card play game to be fast paced and accessible is a challenge! Colour is a very important aspect of the previous ‘Monsters’ games (colour matching blocks, feeding blocks of the right colour to the right monster, etc.) so we wanted to build on that as a core mechanic of this game.

We came up with a great solution where we would use the colours as ‘elements’ where some colours are strong against others. We also make the comparison moment in battle really extreme, which makes it really exciting as a ‘game changer’. Some one can play a diamond card against your silver card, but if you get the colour clash correct, you can cut that diamond card damage in half, and boost your own, which feels amazing.

We also wanted a ‘open deck’ where players can see each others cards. This is unusual, but made the game way more fun as you can see what the other player has, make some educated guesses on what they might play, and then try and counter it. This ‘open deck’ approach also gave us the opportunity to have interesting cards, such as poison blocker cards, or drain steal cards (which steals the healing effect) which give an added layer of strategy to the game.

The turn-based nature also feels great. When it is the city’s turn, you are reacting to what they have just chosen. You might have to play your weakest attack card just to beat the colour clash or you can take glee when you scupper a super high city card. Conversely when it is your turn, you are stepping off the precipice, choosing a card, weighing up what you ‘think’ the city will play on the next turn. This definitely gives a nice ebb and flow to the gameplay.

TA: With making a big departure game like this, how do you brace for the feedback from people who might have thought this was another puzzle game?

PikPok: We wanted to create an accessible multiplayer experience that would delight people with the characters, madcap humour, stupid card names and cool effects and I think the team achieved this with gusto!

Our ultimate goal was to offer something different that would still appeal to the existing fans, but also to a broader audience in addition to giving the game more depth and longevity. We still have all the key markers of the Monsters brand in there, such as the characters, the colour mechanics, the over the top effects and awesome music so we think people will have fun with this.

The original Monsters Ate My Condo games are fantastic but it would have been tough to add any major differences over the perfection of those titles, and we wanted to see what else we could do with the universe that would be different but still exciting.

Of course, people can still download and play Super Monsters Ate My Condo (Free). We at PikPok still play this all the time!