My first ever interaction with golf was on the NES. I remember being fascinated by the concept of hitting a ball across a screen, and although the idea of woods and irons completely eluded me, I was content with whacking away Happy Gilmore style. Over time golf became far less foreign, and though the sport’s popularity has waxed and waned over the years, I still have a certain degree of interest in it, at least at a base level. Battle Golf (Free) doesn’t really do a whole lot for me though.

The concept of Battle Golf lies in its simplistic conceit — you are literally battling another player on each side of the screen, trying to sink your ball first in a series of holes. The theme is pumped up on the App Store with references to Fight Club, but it’s as vanilla as it gets, with a pixelated art style that works, but doesn’t really say anything from a visual standpoint. Every so often something cool will happen like a whale rising from the water, but for the most part, the phase shifts of the arena at hand are literally par for the course. 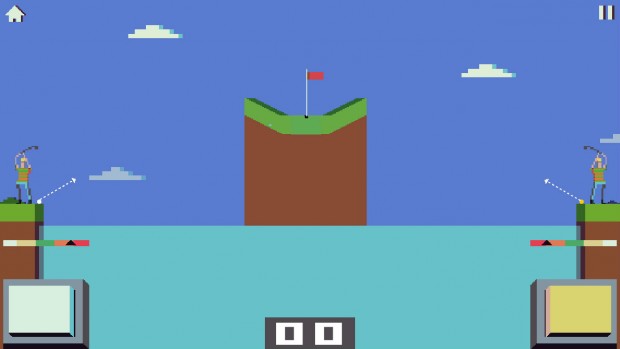 You’ll be able to play against someone head-to-head on the same screen, or by yourself by way of a score attack mode. Sadly, there’s no compromise here, as there’s no option to play against an AI opponent solo. Instead, you’ll just hit balls until time runs out, attempting to best your own high score. It gets old after about 30 minutes.

Having said that, multiplayer is rather fun if you can muster up another teammate. Things get pretty hectic, and since there’s only one button, which controls your angle and power with two respective taps, it’s not difficult to get into the swing of things, even when you’re hunched over one device.

With no online capabilities or AI play however, you might get bored quickly. Since Battle Golf is a one-trick pony, there’s no real IAP outside of the ability to pay $1.99 to remove advertisements. It’s fair, especially when you consider the fact that the ads aren’t all that annoying in the first place. Where the developer really failed is to offer any sort of carrot program.

If you were constantly unlocking new content, levels, or gametypes, I would have been inspired to play over and over. Instead, topping your own high score can only go so far. The repetition is only exacerbated by the fact that there are only two characters that are randomly generated, both of which have the exact same physics system and skillset.

When you get Battle Golf going with a friend, it’s fun to play. But those moments are often fleeting, and that enjoyment will likely plummet once you’re alone with it. Maybe it’ll get some much-needed content by way of future updates. Until then, stay off the grass unless you have someone to play with.