If your sense of humor gravitates towards appreciating absolute absurdity, you might want to know about this truly terrible game that just popped up on our forums and shot up our hot games list. It’s called Tappy Twerk 3D (Free) and it’s effectively the unholy union of what happens when some maniac decides to combine Flappy Bird with … twerking. This once again has us on the same page as Jurassic Park’s Dr. Ian Malcom:

Anyway, here’s the premise of Tappy Twerk 3D: Playing as either a male or female dancer, you’ve got to stop the beach (?) from exploding while making as much money as possible. Coins spawn randomly, as do bombs, for some reason, and you diffuse the bombs in about as sensible of a fashion as their existence at all: By bopping them with your in-game butt. You twerk by swiping, which causes your dancer’s butt to go flying all over the place. Doing well in Tappy Twerk 3D involves swiping wildly and slamming your rear into coins, bombs, and… timed piles of money that appear …without letting any of the bombs explode.

Oddly enough, the game also features some form of difficulty setting, by allowing you to modify the size of your butt. Want to make the game a little easier? Pause and select the “2x" butt. Are you a true twerk master? Do the same but select the “-2x" butt. Whatever butt size you choose, make sure you play with sound, as the totally blown out bass of the musical track included in the game brings it all to a whole new level. 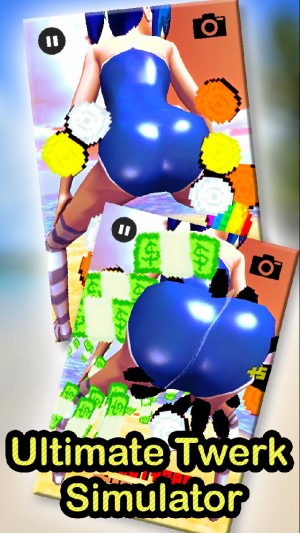 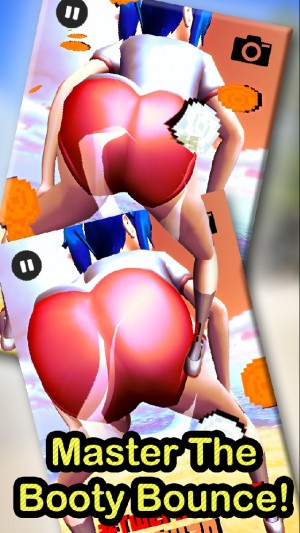 Tappy Twerk 3D is a truly terrible game, but the combination of all the awful mechanics are unintentionally hilarious, particularly as the background music kicks up and you inevitably find yourself twerking in time. It comes in two iterations, a paid and a free version, and honestly, there’s not much reason to buy the “premium" version. All you get is a few more dancers and the removal of ads, but considering you’ll probably just play it twice, laugh, and delete it… You might as well just stick with the free one. Alternatively, you can get almost the entire experience by watching me playing as myself in-game, twerking away-

This definitely raises (or lowers) the bar of the most ridiculous sh*t I’ve seen on the App Store. It’s a never-ending arms race that I’m not sure I want to see the end of.