It’s often said that there’s a fine line between inspiration and imitation. We see both in varying degrees in the hobby of gaming. The former is without question a good thing, but even the latter can be okay depending on how closely it hews to the source. There’s one more category that expression doesn’t cover, however, and it’s something a bit closer to plagiarism. It’s a practice that is unfortunately all too familiar to mobile gaming fans in particular, and it’s almost universally frowned upon. In these situations, games are basically copied one-to-one, adding nothing to the medium and depriving the original creator of their rightful reward. It’s legal, as far as I can tell, particularly if you’re wise enough to swap out art assets, but at least as far as I’m concerned, it’s not ethically okay nor is it contributing anything positive to gaming on the whole.

Rockstars Of Ooo – Adventure Time ($1.99) is a rip-off of Rhythm Heaven. I wish I could say it was just inspired by it, because I think there’s plenty of value in using Nintendo’s popular series as a jumping off point. But no, this is a rip-off. Cartoon Network has taken six of the mini-games from various installments of Rhythm Heaven, recreated them with Adventure Time art, and called it a day. It’s not even remotely subtle. In some cases, they’ve even copied minor details, like the other members of your choir giving you a sour face in the “Belly Of The Beast" mini-game when you make too many mistakes, just as they do in Rhythm Heaven‘s “Glee Club". I’ll grant that it’s a decent copy, if a little lacking in challenge and content. For its price it offers a nice little chunk of Nintendo’s game in Adventure Time clothes. If you’re okay with the shenanigans Cartoon Network is pulling here, you’ll most likely enjoy your time with the game, however short it may be. 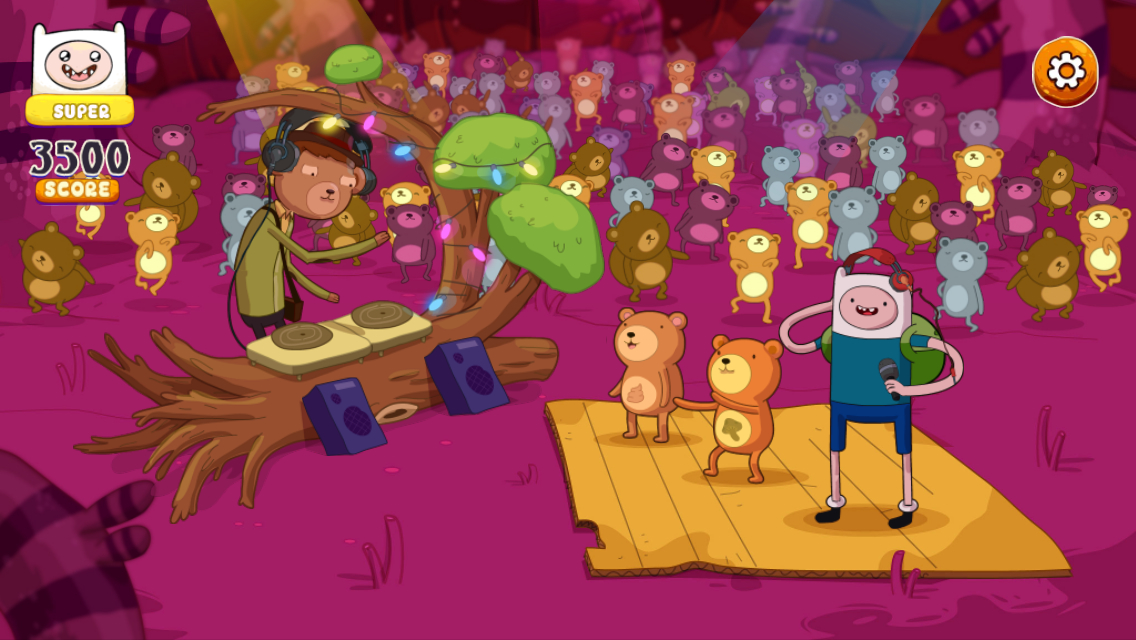 Each of the six mini-games has you tapping and holding to the beat in various configurations. “Belly Of The Beast", a near-direct copy of RH‘s “Glee Club", has you tapping to sing along with two other members and a DJ. The first two will sing, and then you have to match what they did. When the DJ hits the lights, you have to follow his pattern. In “BMO Noire", a take-off of RH‘s “Ringside", BMO will ask three different types of questions and you’ll have to tap the appropriate amount of times to react. “Wizard Battle", as seen in RH as “Built To Scale", has you watching for various colored bouncing balls to meet in the middle. You’ll need to quickly tap when they do to extend your arm and launch the balls at your foe. In “What Was Missing", aka RH‘s “Rockers", Marceline plays her guitar, and you’ll have to tap to play BMO in reply as she finishes each piece. “Fionna And Cake", a slight derivation of RH‘s “Shoot-‘Em-Up", has you tapping to swing your sword at enemies in various configurations quickly as they appear. Finally, there’s “Henchman", this game’s take on RH‘s “Tap Trial", where you have to tap once, twice, or three times according to the signal Marceline gives.

There are five increasingly difficult stage variations for each mini-game, and you’ll need to earn at least a C-rank score to move forward. Generally, it’s pretty easy to finish all but the last stage of each game with an A-rank score, even if you’re not terribly good at this kind of game. Even the last stages aren’t too rough. They feel like a good starting point for something more satisfying. Sadly, there are no remixes, which are some of the best parts of the Rhythm Heaven games. I suspect most players will have the game 100% cleared in one or two gameplay sessions. 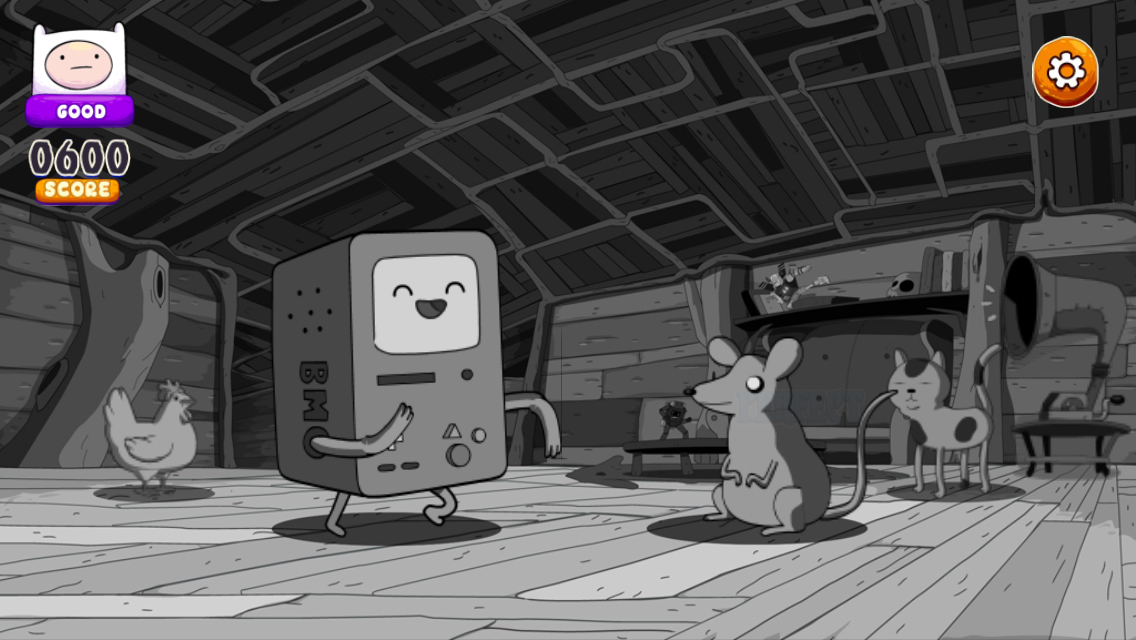 This sort of gets to the problem with this kind of tracing, for lack of a better word. If all you’re doing is moving someone else’s design over and adding none of your own ideas, chances are good that you’re going to miss a lot of the intangibles that make the original great. Especially in the case of a game dripping with as much personality as the Rhythm Heaven games. Rockstars Of Ooo has six games yanked from that series, but without the larger context of the remixes and heavy-duty challenge in the long game, it’s missing a great deal of what draws people to those games. And in taking its beats from Rhythm Heaven instead of going with the Adventure Time flow, it ends up with none of the oddball charms of either.

A rhythm game starring the cast of Adventure Time is a fantastic idea. Looking to Rhythm Heaven for tips isn’t a bad way to go, either. The well-rounded and detailed nature of each of the included games tells me this team has the chops to make a proper rhythm game, too. The timing on taps is good, the patterns are fun, the visual flourishes are quite welcome, and the music is pretty good. It’s extremely crash-prone on lower-end devices, however. Many of its other shortcomings are down to a simple lack of fleshing the game out, which is somewhat forgivable given its scale. So with all that in mind, why copy Nintendo’s homework? I expect better, both from Adventure Time as a franchise, and from Cartoon Network Games in particular. You’re far better off picking up one of Nintendo’s Rhythm Heaven games, provided you have the hardware to play them on.