Remember Cube Runner (Free)? Of course you do. It was probably one of the first games you put on your iPhone back in the day. It had some smooth 3D visuals and fun quick-reaction type gameplay that was a perfect fit for mobile. Well, flash forward five or six years and the New Hotness in town is a little game by Flippfly called Race the Sun ($4.99), which is… well, it’s pretty much the same thing. So why is everyone getting so excited about it? 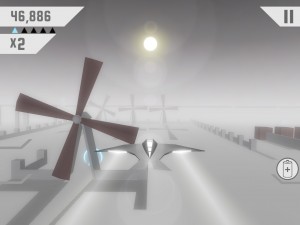 I’ll tell you why. (In fact, that’s literally my job.) But first, let me explain what it is. In Race the Sun you play as a sleek little spaceship flying through a completely flat landscape with a bunch of random geometric objects strewn about. You need to tap the left and right sides of the screen to fly between them, or else you’ll be turned into a glowing puff of smoke faster than you can blink. (Pro tip: Don’t blink.) So far, so Cube Runner, right?

Well, not quite. But there isn’t really one major thing that sets Race apart from Cube; rather, it’s a dozen smaller things. The controls feel better. The speeds are faster. The environments are more varied and interesting. There are ramps that send you flying through the air, portals that whisk you into other dimensions, and great big shadows that sap your fuel. Plus, the levels change to something new every single day so you’ll never get bored. It’s really brilliant how it all comes together, and it’s a total blast. 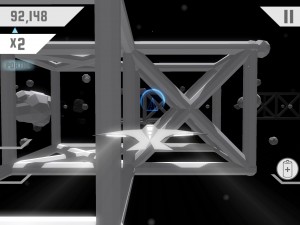 Outside of the gameplay itself, there are some pretty major differences. First of all there’s a three tiered mission system like Jetpack Joyride (Free). It’s my favorite kind, too: the kind where you don’t have to finish all three in order to get new ones. It means that even if you get stuck on one (which you will, because that third tier can be a nightmare) you can still complete the easier ones and get new missions. These missions are of the typical variety where you must do X a certain number of times in one run or do Y over a series of runs. You get points for completing each one, and those points go toward leveling up. 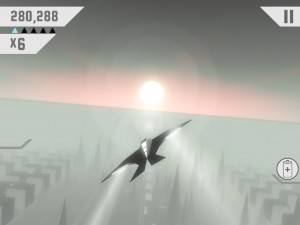 But wait, what’s the point of leveling up? (Kind of a random question, but I’m glad you asked!) Just about every time you level up you’ll unlock something new and fun, like new power-ups or even new environments. Most interestingly, you can also unlock new attachments for your ship that give you passive abilities, like a magnet to suck in pickups from farther away or a battery so your ship will last longer. You can only have one at a time (at first), though, so you can pick a favorite and use that or keep switching among them based on whatever mission you’re tackling. It adds a tiny bit more depth to a game that’s otherwise just about swerving away from things at high speeds. 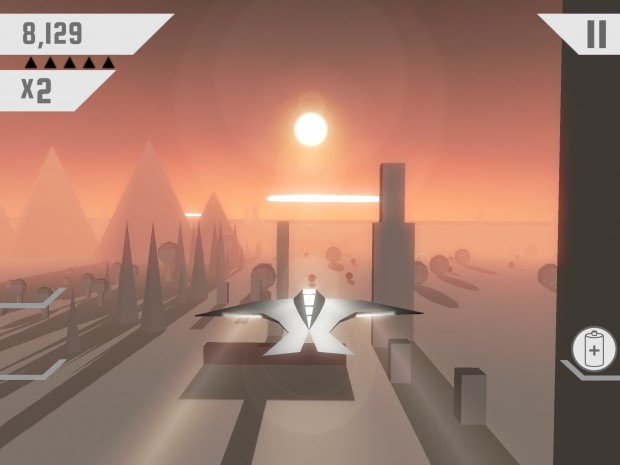 But oh, how much fun that swerving is. Even if the game didn’t have all that extra junk I spent the last few paragraphs going on about, it would still be an amazing, exhilarating ride. Words cannot express how insanely fun it is to fly through a narrow corridor like a bullet from a gun, soar off a ramp into a series of score multipliers, barely miss a giant windmill’s blades, and then get a “PERFECT REGION” message as you prepare to do it all again in the next area. Wait, didn’t I just use words to express all of that? Anyway, the takeaway here is that the game is super fun.

In a way, this could be viewed as the App Store coming full circle. Cube Runner was among the first games to ever grace iPhones, and now, seven years later, here’s Race the Sun. (Ported over from Steam, but whatever.) It’s faster, weirder, prettier, and has way more to do. It’s also more expensive, but that’s okay. Those five dollars will be nothing more than a distant memory once you strap in and experience the rush for yourself.