So, you like Hearthstone (Free), right? Who doesn’t! And how about Puzzle & Dragons (Free)? Maybe? Well, what if I told you there’s a game out right now that combines them? That’s right! Not only can you slap opponents down in vicious turn-based card battles, but you can also upgrade your cards and deal with all kinds of extra free-to-play junk on top of it. It’s true! That game is CROOZ’s Card King: Dragon Wars (Free), and you’re either going to love it or hate the very idea of its existence. Let’s dive in! 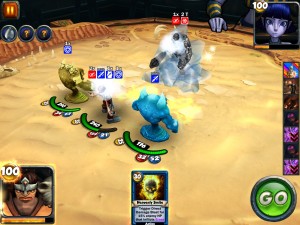 In Card King, your goal is to collect a bunch of different creatures (skeletons, dragons, blobs, etc.) and bring them into matches against an AI or real person. Whereas in Hearthstone you just have to worry about preserving your Hero’s health, here your HP is essentially spread out over all the characters you bring to the table (like P&D). Once your last one has died, the battle is over and you’ve lost. All of your little minions can perform a basic attack by simply dragging from one of them to an enemy, but each creature also has a specific set of cards they can bring into battle as well. For example, my blue Frost Elemental has a card called “Inflict Freeze for 2 turns” which can paralyze any enemy I play it on. Cards can also boost your attack strength, trigger magic attacks, grant shields, lower an enemy’s critical hit chance, and much, much, much more. 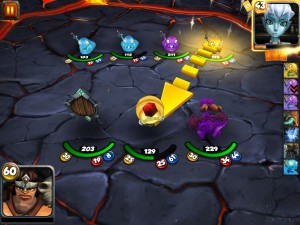 One of the first things that struck me about the game, actually, is just how surprisingly deep it is. Not only are there tons of different cards, but there are also a crazy amount of creatures to collect with different stats and special abilities. You can even create your own cards, and level up or evolve all your creatures to your heart’s content. It’s pretty overwhelming at first, and even after well over a week of playing I still feel like I’ve only seen about 20% everything in the game. If you were the right kind of person, I could really see this taking over your life. You could easily spend hours each day completing daily quests and fighting through daily dungeons upgrading, upgrading, upgrading. 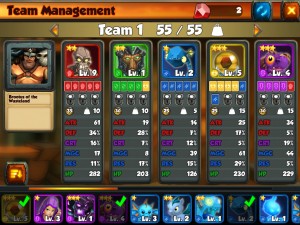 Of course, you’d have to work around the energy timer if that was your plan. At first it’s pretty generous, with frequent rank-ups replenishing it and giving it a higher capacity at the same time. The further in you get, the more you’ll feel squeezed, though. Later battles cost more energy, and you’ll need to spend a bunch more energy trying to grind for upgrade material and coins. So yeah, the game is full-on free-to-play. If you are a Hearthstone nut, this game’s more aggressive monetization might be a tough pill to swallow. If you don’t mind it (or are just used to freemium stuff) then it’s probably not going to feel that bad. Personally, I’m getting more and more comfortable with social RPG shenanigans and Card King feels about right in that respect.

While the game is generally pretty fun and the monetization isn’t terrible, I do have some issues with it. First of all is the game’s heavy reliance on randomness during battles. I know, I know. Card games and RPG’s alike have always made use of random number generators, but somehow it feels slightly worse here. I can’t count the number of times I’ve had an AI opponent hit me with a “50% chance attacks fail” card that seems to make every attack fail, and then I’ll play the same thing on them and they have zero problem attacking. It could be that I’m just unlucky, but even so, it’s incredibly frustrating. 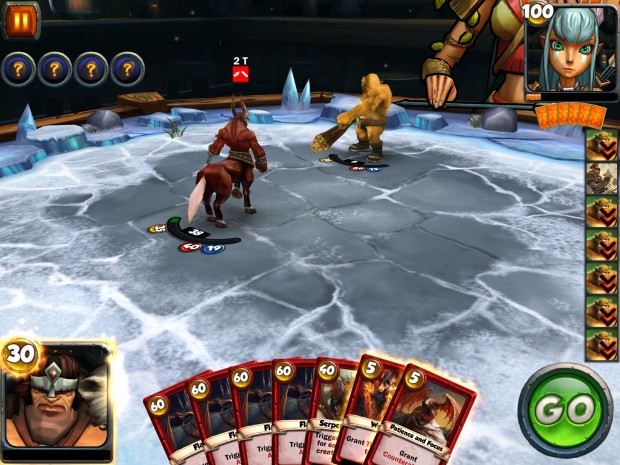 Another problem I have is with the game’s multiplayer. It seems to work really well at first, with speedy matchmaking and a smart system that raises everyone’s cards to level 25 to even the playing field. Unfortunately it doesn’t quite level it enough, because you can still bring in higher tier cards and demolish your opponent through sheer brute force. I’ve been stuck in the lowest league for a week because I haven’t ranked up enough to take more powerful cards into battle. Our cards may all be level 25, but every opponent I fight has a hand full of 4 star creatures and the best I can do is a few 3’s. The only way around this, I guess, is to keep grinding and grinding until I can rank enough to fit the heavier 4 star creatures into my hand. (Also, I have to keep grinding missions for gems to actually acquire some 4 star creatures.) It’s going to take a while. I hope it’s worth it.

So that’s Card King: Dragon Wars. It feels a little overwhelming and unfair at times, and it has a free-to-play model that is almost guaranteed to turn large sections of our readership off (or the ones that comment, anyway). That being said, it’s undeniably fun, absurdly deep, and has a really competitive multiplayer scene with hassle-free matchmaking. It’s kind of tricky to give the game a score, because it really depends on what you’re into (and can put up with). If you like Hearthstone and social RPGs like Puzzles & Dragons, this could really be your new favorite game. If you have a low tolerance for free-to-play junk and don’t have a lot of time to put into grinding up a nice stable of diverse characters and cards, then I probably lost you a while ago anyway. Myself, I’m leaning towards a 4. That feels about right.