The gamebooks released by publisher Choice Of Games are a bit of a tough sell to the uninitiated. I mean, gamebooks in general are a tough sell, but many of the other gamebook publishers on the App Store put a lot of work into the stuff around the text. Whether it’s a plethora of illustrations, a unique visual presentation, added music or sound effects, or even just playing around with the appearance of the virtual pages, considerable effort seems to be spent to try to get people to give the actual meat of the experience, the text, a proper chance. Choice Of Games offers little more than a splash image, generic radio buttons for choices, a couple of splashes of color in the status screen, and black text on white pages. There is no sleight of hand here. It all falls on the plot, the quality of the writing, and the success of the choices presented in creating a compelling personal experience for the player.

Choice Of Games’s latest, Champion Of The Gods ($4.99), puts a strong foot forward in all three of those critical areas. You take the role of a young boy or girl from a small village who is selected by the fates to serve a special destiny. You’ll eventually leave your small town, have a couple of adventures, settle in a big city, and have a few more adventures before you reach the eventual climax. I’d love to be more specific than that, but as usual for a game from this developer, there are so many choices that alter the fundamental storyline that it’s extremely unlikely my experiences would match yours. The world is clearly inspired by Greek mythology, though it gives the flavor a slight twist that keeps it from feeling too familiar. I mean, it’s still Greek mythology wearing a fake mustache, but I really do appreciate that mustache. 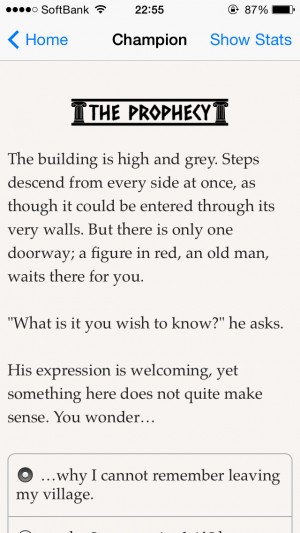 It’s a great adventure in the classic style, pitting you against monsters, gods, and whatever else you choose to pick a bone with. After all, you need not follow your destiny just because you’re meant to. There’s a lot of stuff going on in the story, but almost every event hangs around the fundamental conflict between order and chaos. Do you believe in safety and servitude, or freedom and all the risks that come with it? Either way, there will be hard sacrifices made. It’s an interesting idea to explore in a gamebook, where the player is essentially a god directing the character’s fate, with the character rarely able to resist the player’s decisions. We become so comfortable ruling over our little puppet that when we hop perspectives late in the story, it’s kind of jarring that we no longer have direct control over them, even if only for a short span of time. I’m not sure if the writer intended to hit on that meta-commentary, but the story beats certainly got me thinking.

As usual for a Choice Of Games gamebook, you get a great deal of control over your character’s construction. Through making choices, you can choose your gender and sexual orientation, your special talents, and influence all manner of personality traits. Your sexual identity doesn’t do much other than change around some names, pronouns, and the odd bit of text. The special talents determine how you should approach physical challenges. The idea here is to play to your strong points if you want to succeed. Your personality traits have much more subtle effects, but they will determine how other characters react towards you in a variety of ways. You also have several romance options, and can even influence the type of one of these characters.

There are so many variables at play here that you could play the game several times and still run into new things. It’s made all the more impressive by how lengthy Champion Of The Gods is. Even a relatively quick reader should find a playthrough to be at least an evening’s work. When a gamebook is that long and filled with as many choices as this one, it makes for an unusually high amount of replay value. Upon finishing it for the first time, I couldn’t wait to start again and see how things would play out if I made several choices differently. Part of that is the fact that the game makes you live with your choices. It’s virtually impossible to die prematurely for narrative reasons, but perhaps to make up for that clemency, the game doesn’t let you stick a virtual finger in the page and come back if you don’t like where your choice goes. In more punishing gamebooks, I would see that as a negative point, but with the kind of set-up Champion Of The Gods uses, I think it’s for the best. 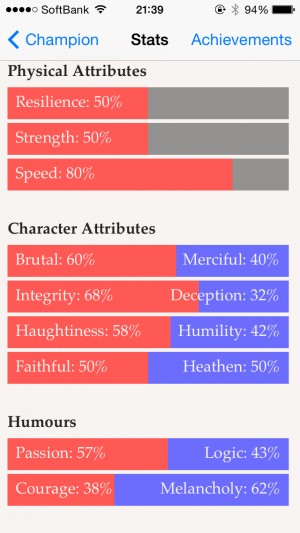 Surviving until the end of the story may not be difficult, but getting a satisfying ending is rather tricky. You’ll have to know your character, know your enemies, and pay careful attention to which tactics will work for you and which will likely fail. There are a few endings I would consider to be better endings, but it’s going to depend on how you play your role, and of course, your own personal point of view on the game’s central dilemma. I would say that it’s unlikely you’ll achieve the ending you were hoping for on your first playthrough, though it’s certainly possible if you play things carefully and have a good sense for how things ought to work in a world shaped by Greek mythology. Aside from exploring the various branches of the story, there are also Game Center achievements to hunt down, if you’re interested.

Champion Of The Gods was written by Jonathan Valuckas, the author behind another Choice Of Games gamebook, The Fleet ($3.99). He puts together a compelling story that manages to maintain its momentum through its many twists and turns, and provides a satisfying conclusion worthy of your hard efforts. The would-be antagonist of the story is a particular stand-out among the cast of characters, at once detestably cruel and yet credibly tempting in his protestations about your actions. Most of the other characters pop in and out of the story a bit too quickly to really get attached to, but even the minor characters get a few details to help invest you in their assortment of plights. The story manages to be an entertaining read even independently of its interactive nature, and the choices are handled smoothly such that just about every branch feels like the intended one.

It’s another winner for a gamebook publisher with several strong titles already in its library. The theme of Champion Of The Gods may not be as out there as some of the other gamebooks Choice Of Games has put out, and as usual the presentation is as spartan as can be, but there are reasons that stories based on Greek mythology are popular, and Champion Of The Gods is fine example of them. With epic action, soapy drama, conflicts between gods, plenty of romance, and interesting quests that take you to a variety of places both mundane and extraordinary, this piece of interactive fiction is certainly worthy of being called a champion in its own right.