It’s really tough to describe a game like Agar.io (Free). It hearkens back to the old age of computing, back when Prodigy and CompuServe allowed users access to games at the cost of an hourly rate. There’s something soothing about the experience, and since it’s free and gets right into the action in seconds, you may as well try it out.

Agar.io is described as an “MMO," but it’s a lot more arcade-like in nature. You’ll start off as a single, solitary cell — yep, as in, a microscopic organism. Your objective is to simply absorb smaller cells, grow in size, and live as long as you possibly can. If you happen to get absorbed, it’s game over, and you’ll start over from the beginning. I’m leaving out the major gimmick of course, in that most of those other cells that you are eating and being eaten by are actually other players. Hence, the “massively multiplayer" part. As you’d expect, things can get extremely hectic and competitive being surrounded by a constant sea of players. 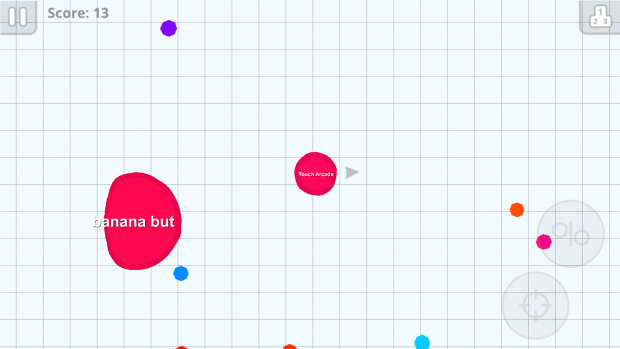 To move about you’ll simply flick about on-screen, with the option to shoot out bits of your cell or split into two entities. You’ll only want to do this after you absorb a few cells, and it adds a bit more depth to the proceedings. Also, there’s plenty of neutral areas to hide in, but it’s always a gamble as there may be a bigger foe in there waiting to eat you. Again, the premise is absurdly simplistic, but there’s a lot of strategy at play.

The reason Agar.io is so fun to play beyond the first few runs is because it has personality. Players can use emblems and phrases for their individual cells, and it’s particularly funny to see two players labeled “North Korea" and “South Korea" smash into each other. While there’s a huge influx of memes about, they do warrant the occasional chuckle when two competing memes are chasing each other. It’s just good, lighthearted fun.

Another key component to the addictive nature of the game is that it’s fast-paced, and easy to catch back up if you happen to die. It’ll take you roughly five minutes to become an unstoppable force, and all you have to do is survive around 30 seconds to get back in the game and start eating up new players. 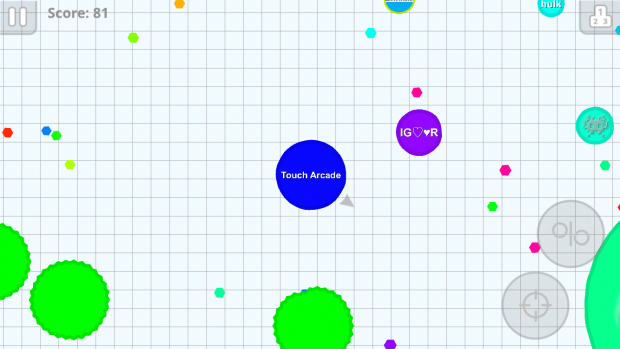 Of course, there is a bit of entropy to it. Spawns are random, so you’ll often times arrive into a game with your cell immediately getting devoured.  Also, when you do happen to reach unstoppable levels, it’s tough to control the action on-screen. Now that’s to be expected, as getting bigger has an inherent risk-reward angle to it, but the screen real estate on a mobile device combined with the camera doesn’t do you any favors.

Thankfully, Agar.io is actually free, and doesn’t have any IAP of any kind yet. Although it could stand to use a few tweaks over time, for all these reasons and more, I highly recommend it.